It's time for another round of projects and books. Here is a picture of Rachel's finished knitting project for 4h this summer. She put many, many hours into it and the shawl turned out just beautifully! It looks much better in person than it does lying on the carpet in this picture. I'm afraid I have no idea what the name of the pattern is! 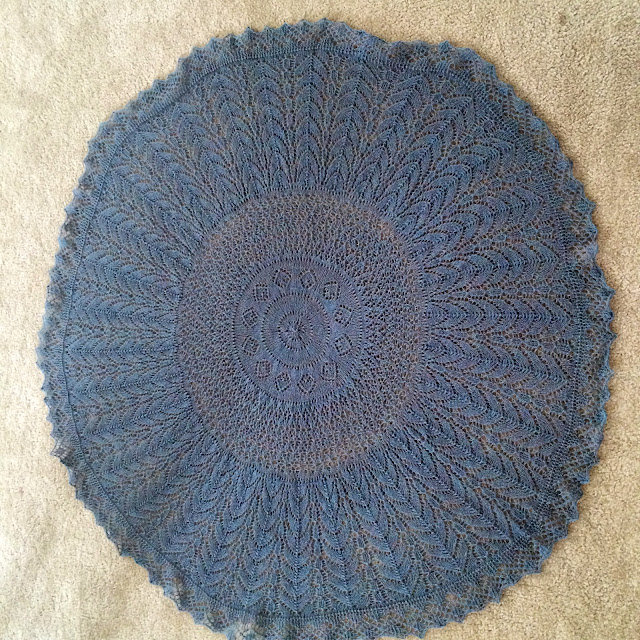 I spent more time working on quilts this summer than knitting. I managed to finish this quilt for David for his birthday. He was the only child who did not receive a quilt from me at their birth so it was high time I made up for that! I found the star squares at Goodwill Outlet and enjoyed putting the quilt together around them. David LOVES his quilt! 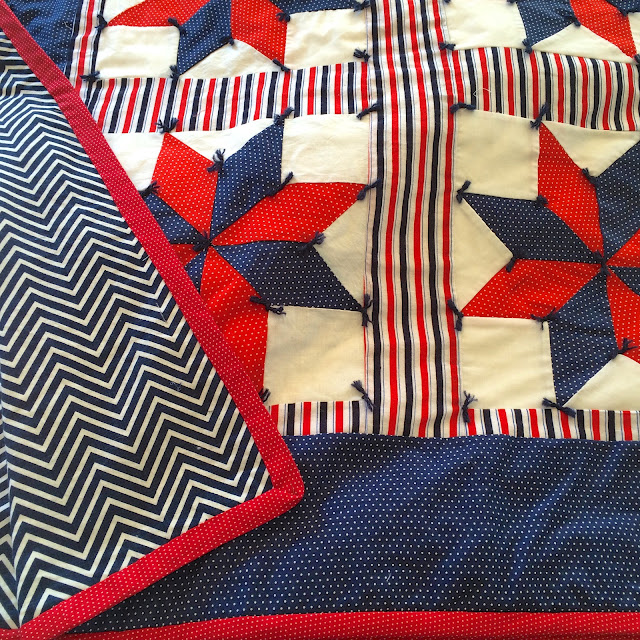 I did start into this beautiful skein of Madelintosh (Rainwater I think). It's a test knit of one of my sister's patterns. 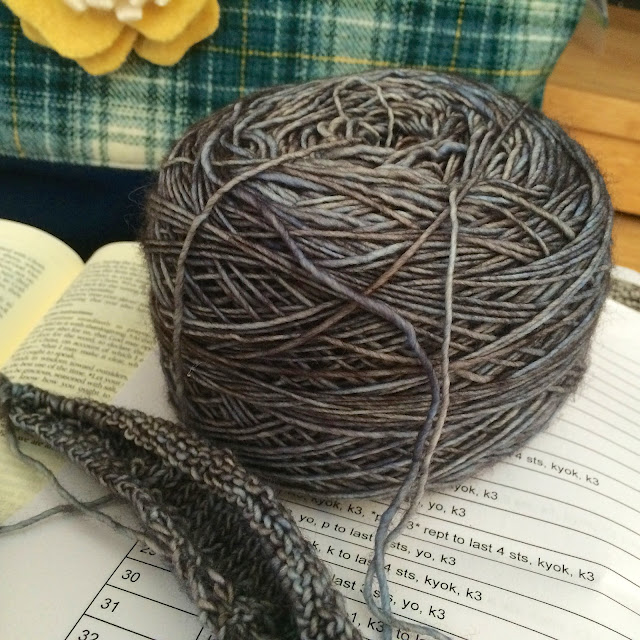 I found six handmade lace placemats at Goodwill Outlet this summer and had to bring them home. They were very yellow but cleaned up beautifully. I can't imagine all the work they must have been to create! 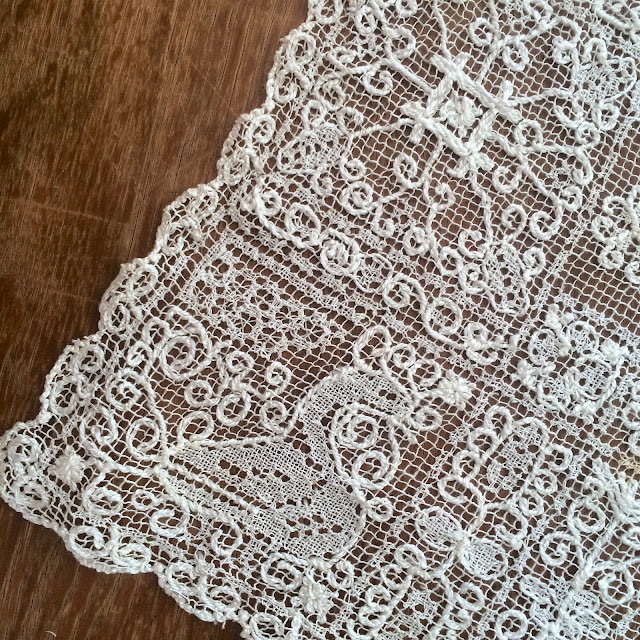 I did make one flower for an order that requested "green". I have a number of tea cozies on the go and must get them finished up for the shop. 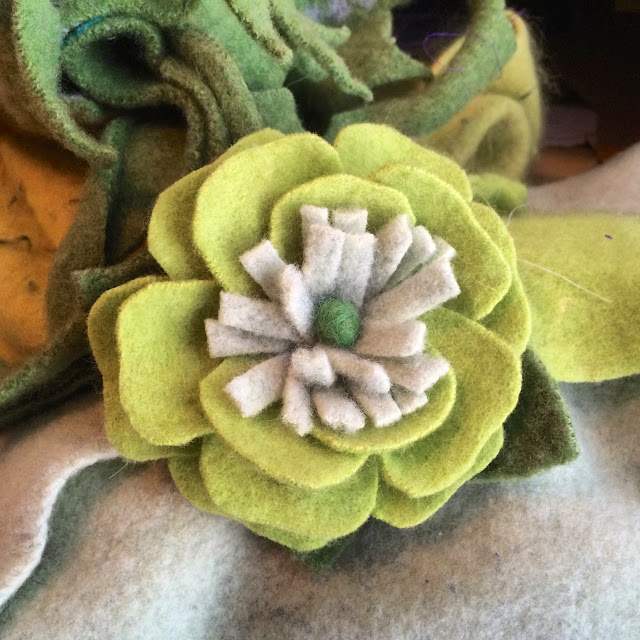 The other knitting project that I get a row done now and then is with this gorgeous baby alpaca wool with which I am knitting this Jared Flood pattern. 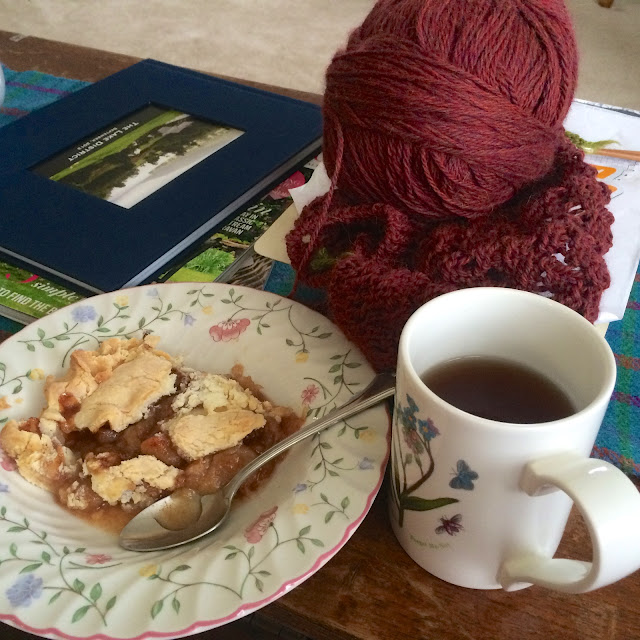 As I recently mentioned, my family and homeschool responsibilities have increased in such a way as to leave me less time for these types of creative outlets. I am thankful to be okay with that just now. Reading has become my main relaxation outlet and at least that gives me lots of food for thought.

The Shepherd's Life: Modern Dispatches from an Ancient Landscape

by James Rebank. Perhaps you saw me mention this a few weeks ago in the Scottish Farm post. I just really enjoyed this glimpse into the everyday life of a modern shepherd in the English Lake District. Do beware that there is significant amounts of language in the book.

Art Before Breakfast: A Zillion Ways to be More Creative No Matter How Busy You Are

by Danny Gregory was a quick, inspiring book aimed at getting people to draw. The pages and drawings were fun and the book definitely made one think, "I could do this". No, I didn't really do any of the exercises, but I did find my daughter looking at it, asking for a sketchbook, and then later finding her drawing in it. I also found myself drawing more as well. Purpose accomplished!

The Penderwicks in Spring

by Jeanne Birdsall. Finally! A new book in our beloved Penderwick series. We've enjoyed following the adventures of this modern-day largish family that live on the East Coast. This book's major themes deal with the loss of the family dog as well as the processing of grief over the death of a parent some time ago. These are both topics that are important for children and I think the author did a good job of walking kids through the realities of this without making it an overly dark story.

When Wanderers Cease to Roam: A Traveler's Journal of Staying Put

by Vivian Swift. This was a fun book to browse through over the months as it is a scrapbook/journal of sorts organized by the months and seasons of the year and includes watercolors, anecdotes, quotes, and the author's personal memoirs of travels. I found it when I had looked up "Susan Branch" on Amazon as the style of the book is similar to Susan's.

by Rosamunde Pilcher was a very fast read, probably too fast.  Some of Pilcher's novels are among my very favorites but this book was too easy to predict and everything happened too fast. The book has some points with me since it is set in England, but I probably wouldn't ever read it again.

Born Under an Assumed Name: The Memoir of a Cold War Spy's Daughter

by Sara Mansfield Taber was a fascinating book. Taber grew up moving frequently as her dad's work (a spy for the CIA) took the family to various places around the world and the USA. Initially I thought the book was going to tell all sorts of interesting things about spy-life. Rather, it talked about what it was like growing up in so many different places and cultures. I found myself connecting deeply with what Taber related.

I haven't lived in as many cultures as she has, but I did spend several years of my childhood in Africa and then of course spent four years in Scotland as an adult. In between, my family moved multiple times. Taber talked about saying goodbye to people and places, finding her heart torn between two countries, wrestling with how to be American and yet love other countries, prizing mail and communication with old friends, and coming to grips with the fact that you can't escape unscathed from the downside of moving so much and through so many cultures. It was like therapy reading this book!!!

That said, Taber and I do not share the same world view and so while sharing many of the same emotions and experiences, I do look at these things in my life through a different lens. However, this book was still very fascinating and personally helpful.

I think that's it for now! You can find more ideas for knitting and reading at Ginny's Yarn Along.

I started Rosamunde's Coming Home but set it aside for winter reading. I mentioned on Instagram that I received her book, Christmas with Rosamunde Pilcher, in the mail today. I've wanted it for awhile but even used copies were expensive until recently. This evening I read the short story that is in the end of the book (the rest is about her family Christmas traditions and such, it will go in my annual Holiday reading!).

I have one book review to write next week and another book on the way but I'm taking a bit of a review break to catch up on personal reading. I just started Sarah Mae's new book, Longing For Paris. The subtitle is: One Woman's Search for Joy, Beauty, and Adventure... Right Where She Is. Hoping tomorrow afternoon to spend time in it.

Your daughter is so talented! (Of course, she takes after her mother.)

Oh my goodness. Tell your daughter that I love her shawl!!! :) We too enjoy the Penderwicks. We usually listen to them on audio book during long trips. We are on the Point Mouiette??? title! I hear you about homeschooling taking over as ones hobby! :) I've just finished Bequest of Wings and am now reading Longer Flight, both by Annis Duff. Books about books. ;) Story of a families life with books...just love them! :)

The shawl is beautiful!

I don't think I could finish one quilt, let alone multiple!

the shawl is very beautiful!!!! Those books sound fascinating. I am so excited DV to quilt (and learn to quilt more) this fall!

Rachel's shawl is exquisite. I thought I spied it in an earlier post. She has become an extremely accomplished knitter! I really like the Jared Flood pattern too. I'm glad you are okay with not having much time for your creative pursuits. Your time will come! Very interesting to read your review of the spy-child book, and how much it resonated with you.