Although Michael has been to Singapore and other parts of Asia before, it was my very first time in Asia and there were plenty of firsts for me! First, we flew west, not east! And the flights were so very long -- long enough to have flown from New York to London and back again without stopping. It sounds long and hard, but without children it seemed nearly a piece of cake.

The food wasn't a piece of cake though. I informed Michael on the first flight that I'd ordered him gluten free meals and vegetarian meals for myself -- hoping that between the two there would be something I could tolerate. (I think he was disappointed.) We ate, but I was disappointed too. No points here for airline food. 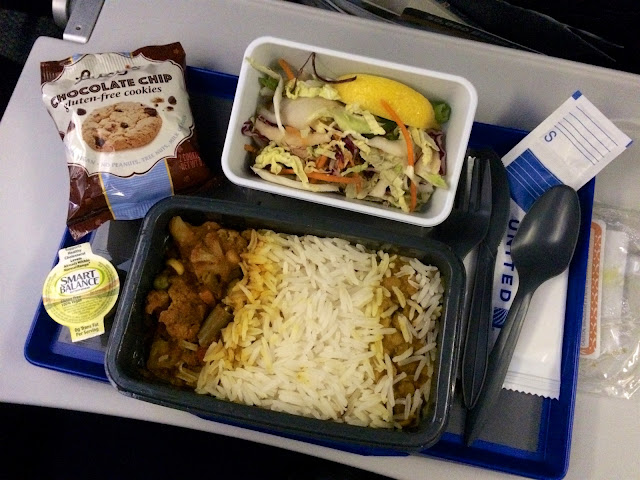 But the airline did have decaf coffee (albeit instant). I didn't know when I took this picture that it would be my last cup of coffee for 2.5 weeks -- I guess decaf coffee isn't a thing in Asia. 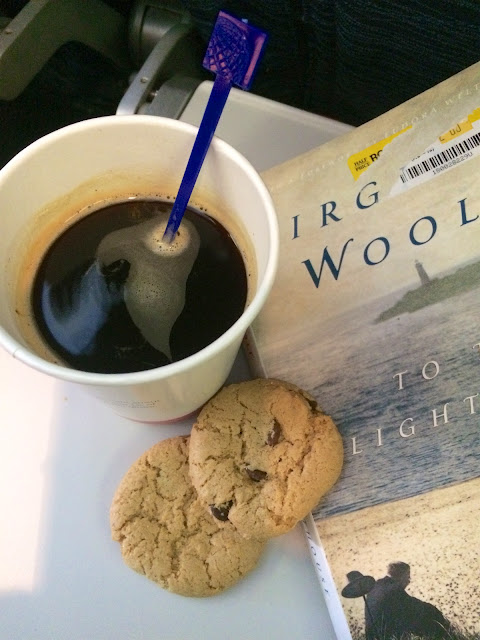 We flew from Indy to Chicago and then across to Japan where the joys of Airline Lounges were revealed to me. How did I not know about this beautiful, quiet, relaxing place? Probably because it costs a lot to join these clubs and we just happened to have two free entrance passes. If I travelled regularly for business, a pass would be the first thing I would buy! 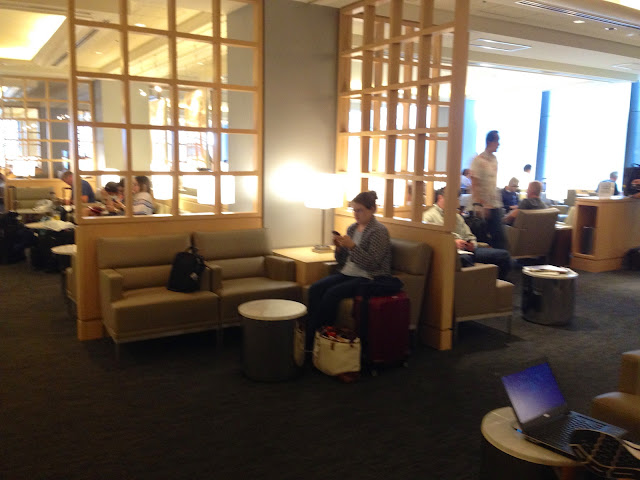 The lounge had a delightful assortment of Japanese appetizers and treats. Little cakes, fruits, sandwiches, all kinds of drinks, Asian nut mixes, and rice crackers. This helped the layover time pass quickly! 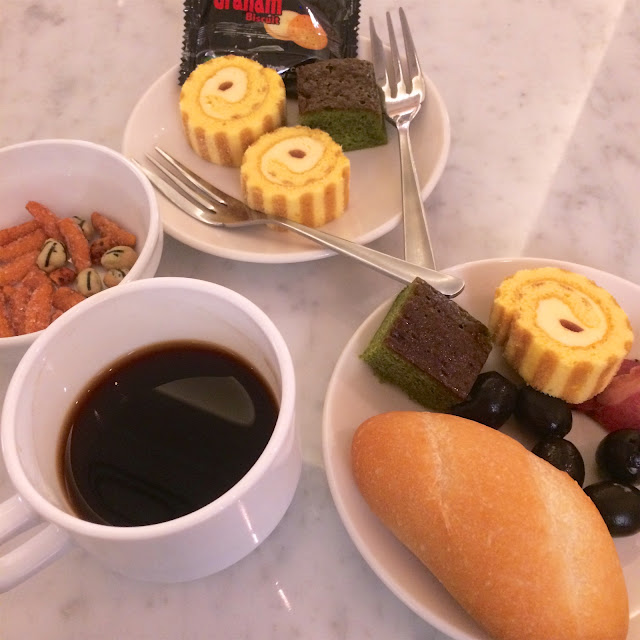 We arrived in Singapore around midnight and were greeted by all the pastors and elders as well as other friends from the congregation there. This was new to me as well -- everyone making the effort to travel all the way to the airport to welcome us (in the middle of the night)! How special!

We were whisked away to the apartment of friends and this is what we saw out the window when we woke up the next morning: Two of the pastors and their families hosted us for lunch at a mall (it seems most shopping and even a lot of eating is done at malls). The food court held lots of options! There was hardly time to investigate each food:

It would be fun to taste everything! (almost everything) 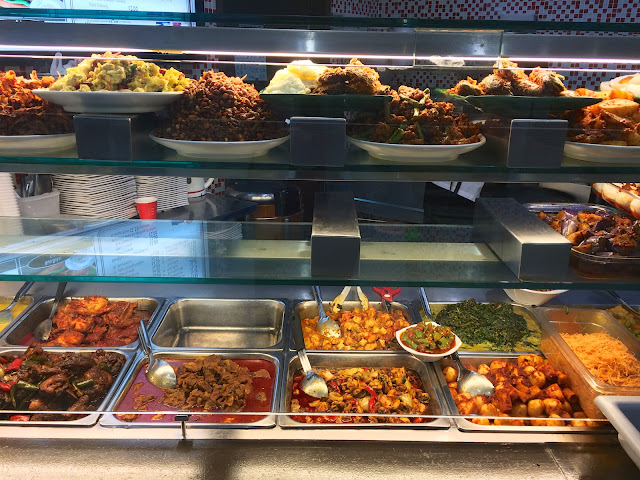 We let our friends order for us and were given these drinks to try. Delicious and refreshing! 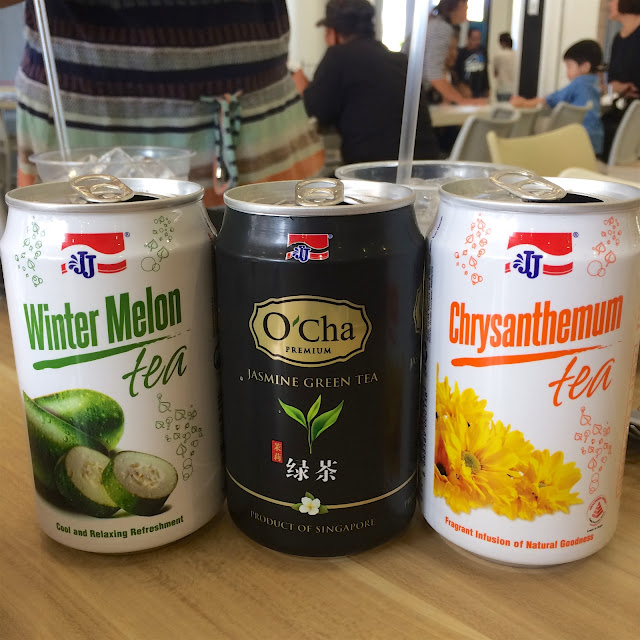 And lunch was so good! There were soups and a "carrot cake" which is not a cake at all but a pancake made with white radish, and we had curries and cooked vegetables like baby bok choi and cabbage. I wouldn't mind a bowl of this showing up on my desk right now! 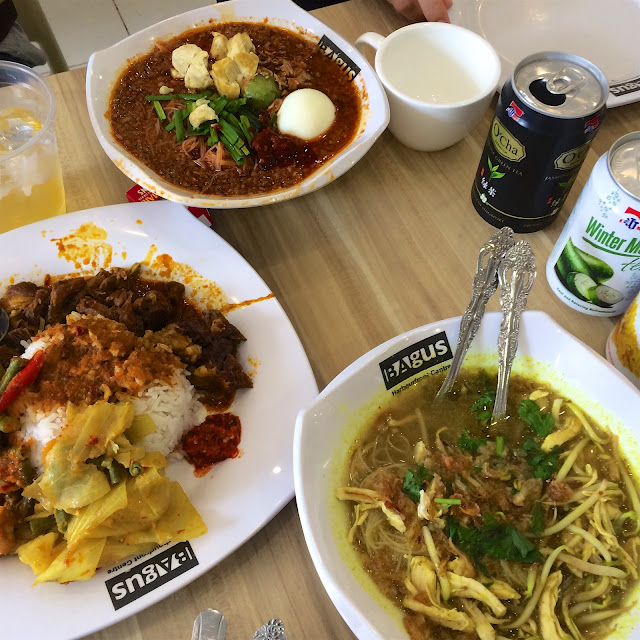 For dessert one friend bought a large bag of lychees and we all grabbed a handful to peel and pop in our mouths. Such a lovely flavor -- very sweet with hints of floral to it. 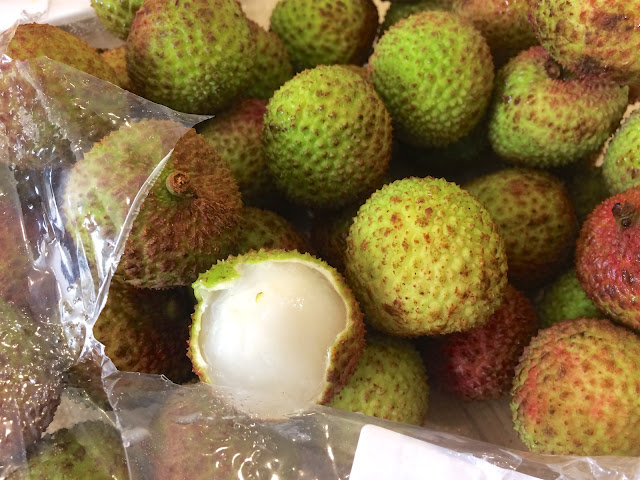 After lunch we were taken for a ride on the cable cars that cross over to Sentosa Island which has become a resort island. We could see rain moving in at a distance. 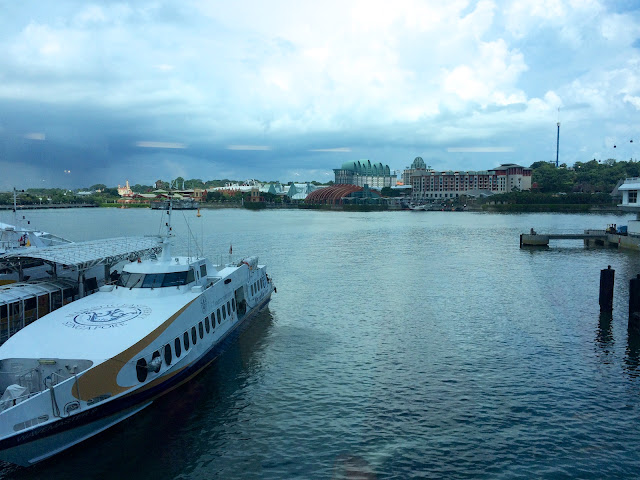 By the time we hopped into our cable car the rain was coming down in torrents! 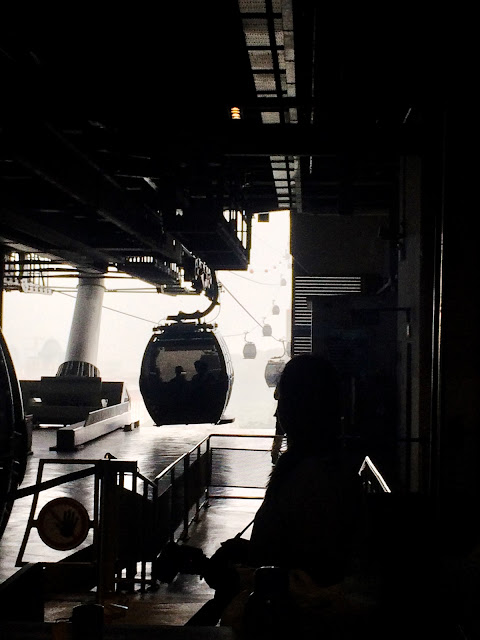 Out we started over the harbor area and towards Sentosa only to have the cable car stop in mid air. And stay stopped. For 25 or more minutes! The rain beat down and the thunder roared and we didn't know why we were still hanging in the middle of the sky waiting. Once the rain moved on we had a lovely view of the city. 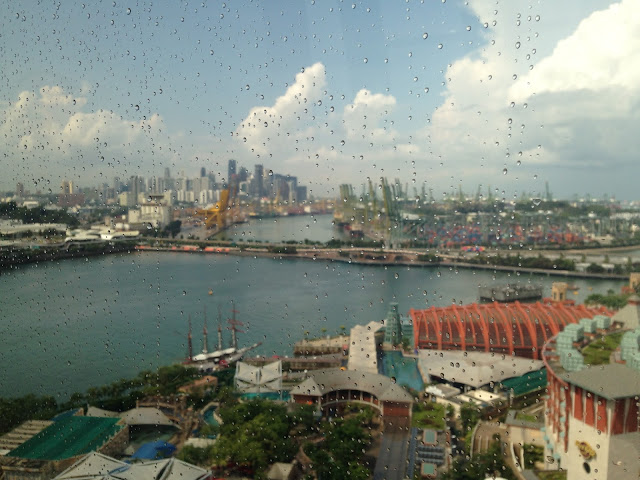 And we spent a lot of time closely examining the fancy water park that was directly below us. Best of all we got to make a memory with new friends! 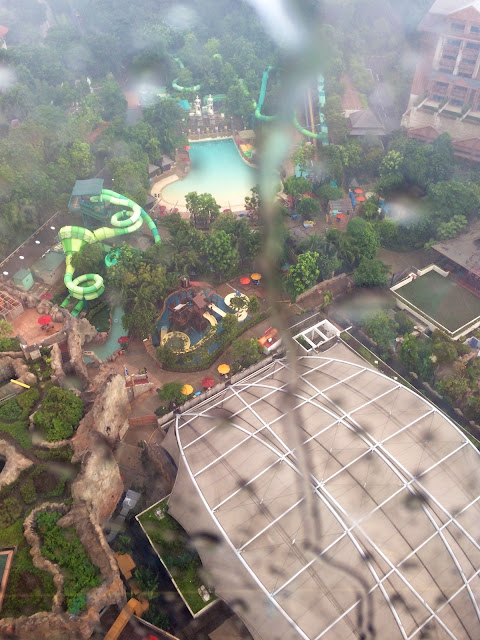 We finally reached Sentosa Island and I was enthralled to find my beloved frangipani trees in bloom everywhere. I've missed those flowers so much since I first came to love them during my years in Uganda. Smelling one can instantly transport me back in time nearly 30 years. 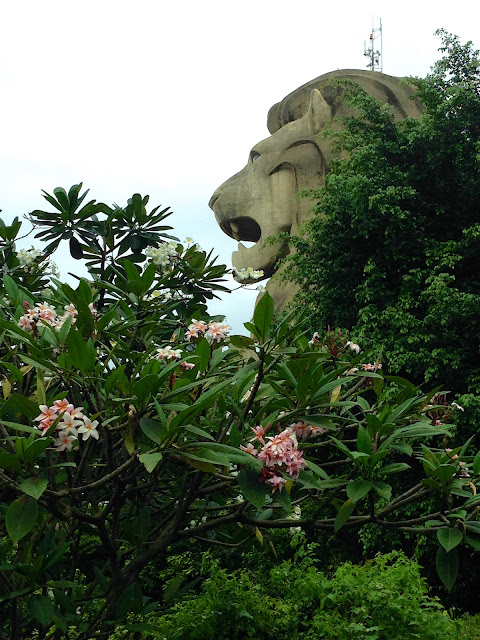 And bougainvillea was also blooming everywhere! Another old favorite! 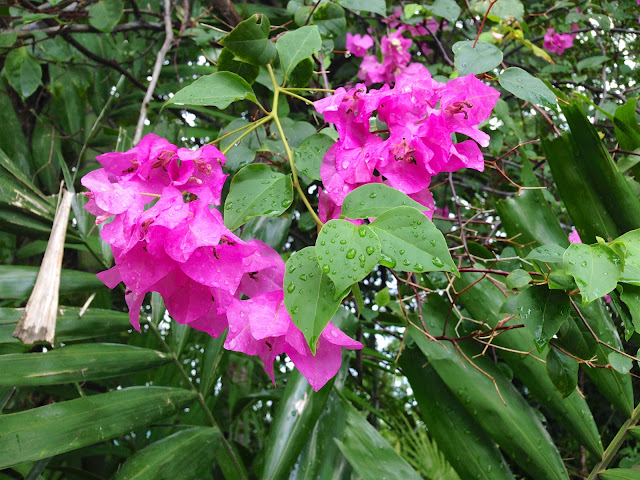 We got to see the Merlion up close! (half lion, half mermaid). This is an iconic symbol of Singapore.
Singapore means Lion City and the name Merlion combines the history of Singapore as a fishing village ("Mer" meaning "sea") with lion, the meaning of "singa." 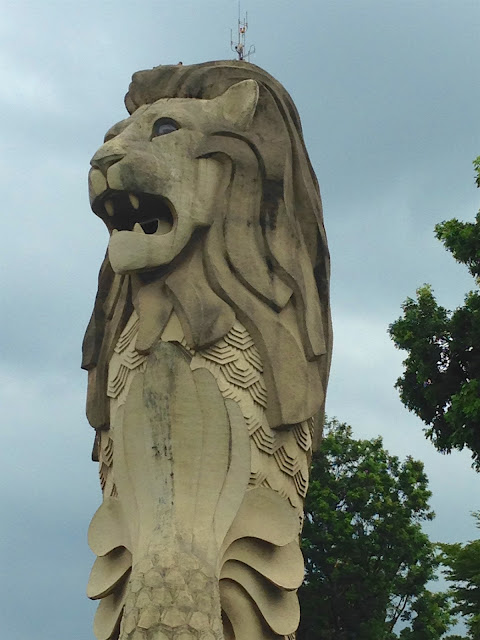 We opted not to take the cable car back to Singapore proper but rather the quick and easy train. On our way back through the mall we came upon the most entertaining site: the Baby Spa! 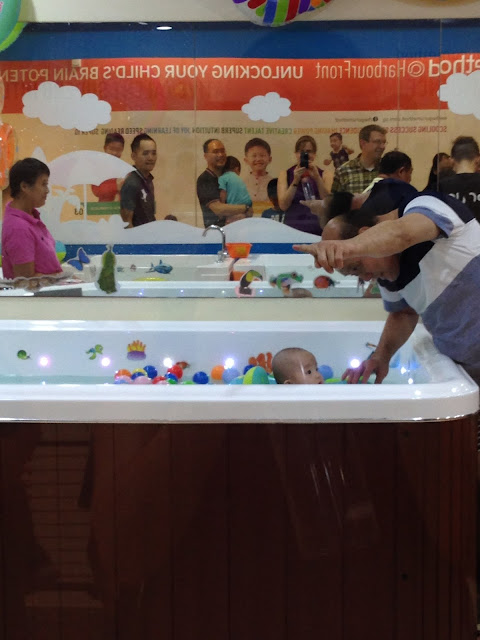 Parents pay to let their baby float around in a bathtub! 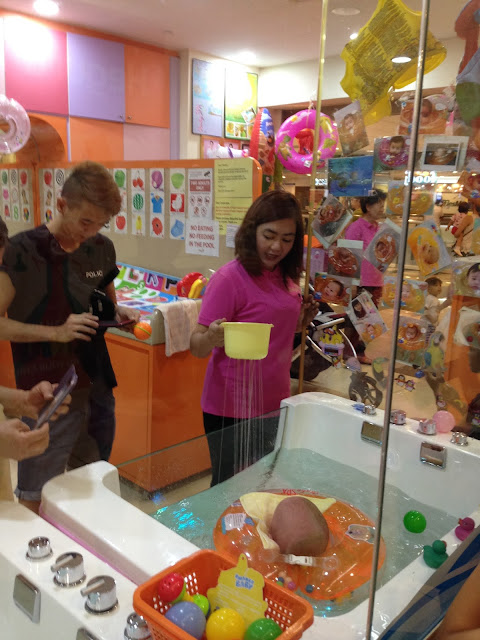 The babies love it and the parents love taking pictures!! Perhaps because so many Singapore apartments only have showers the Baby Spa provides a place for babies to experience playing in water? Anyone think we can start one here? 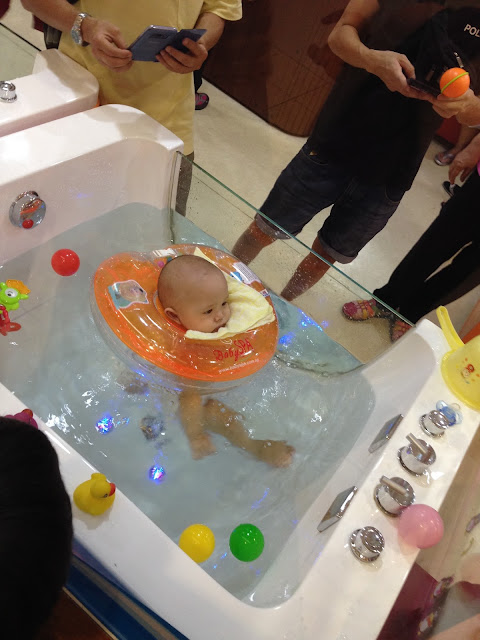 Dinner found us at the home of the senior pastor and his family for a delicious meal followed by more tropical fruits such as "Dragon's Eyes," "Chinese Cherries," and "Rambutan." The yellow and red fruits were in a similar family to the lychee. 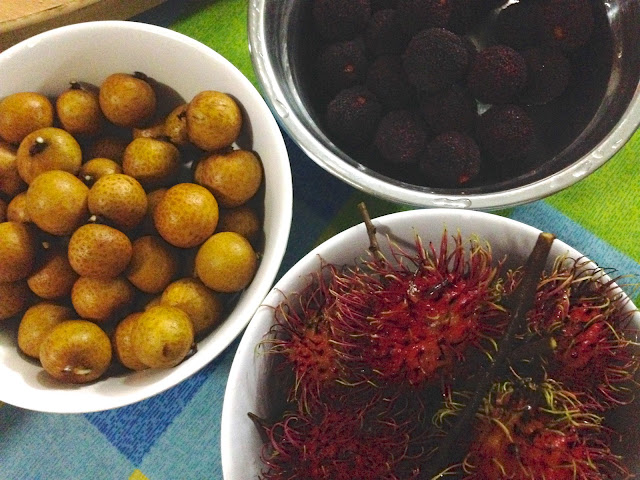 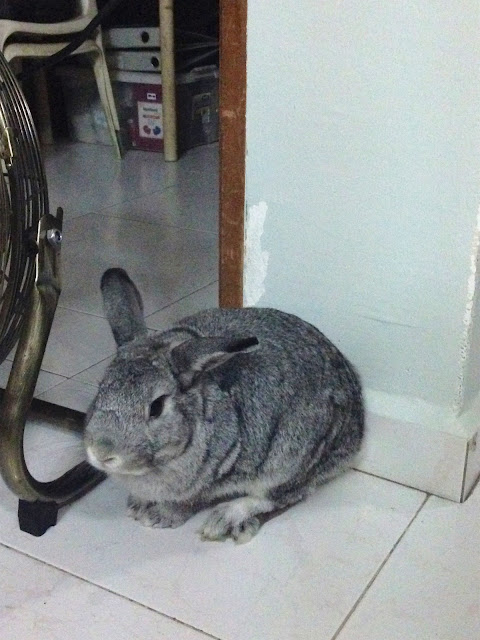 Looking back that sounds like a very full day to me! We probably needed that in order to keep our eyes open all day and try to adjust to the 12-hour time difference! Next up will be our visit to the Gardens by the Bay.

Posted by Heather LeFebvre at 4:18 PM