It's time for the promised sheep safari!!! I've collected a bunch of photos from our drives around the Isle of Skye: 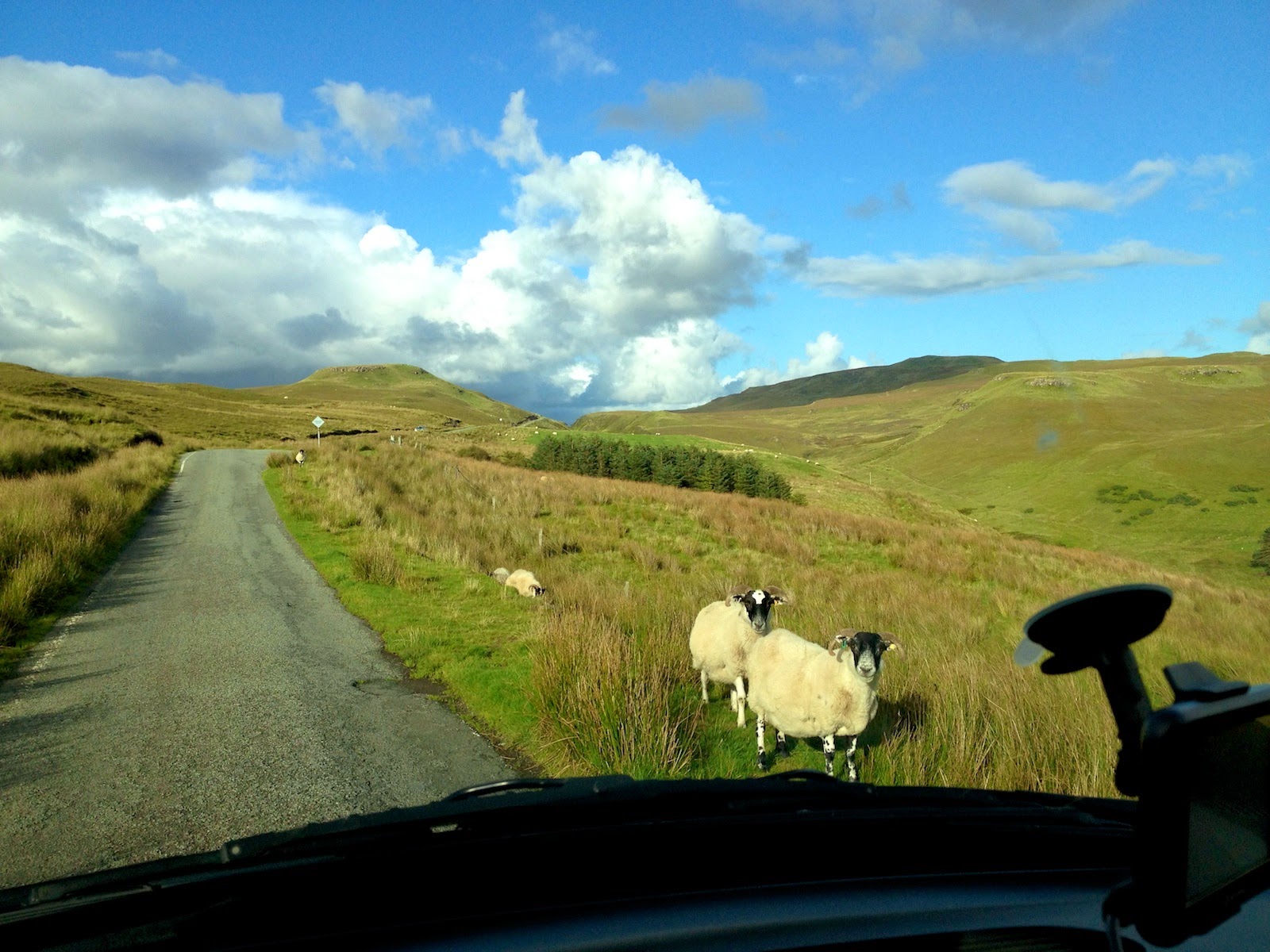 Poor Michael was so very patient with the six photographers who never got tired of photographing sheep. He soon made a habit of slowing down, stopping, hitting the automatic door openers, and letting the children unbuckle to grab their best shot. 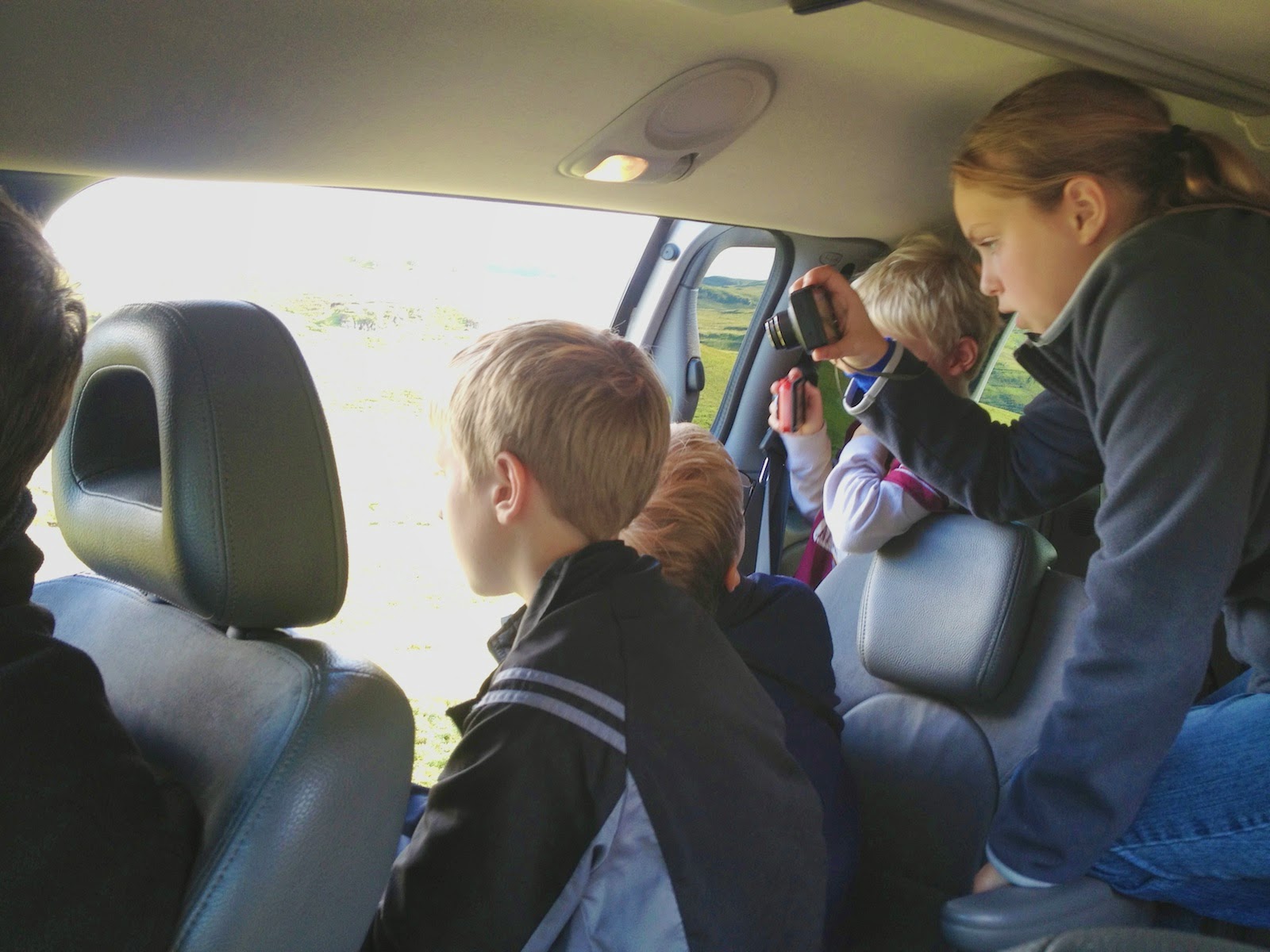 Many of the sheep are spray-painted with the owner's colors. It kind of takes away from the romantic picture, but it has a practical purpose. 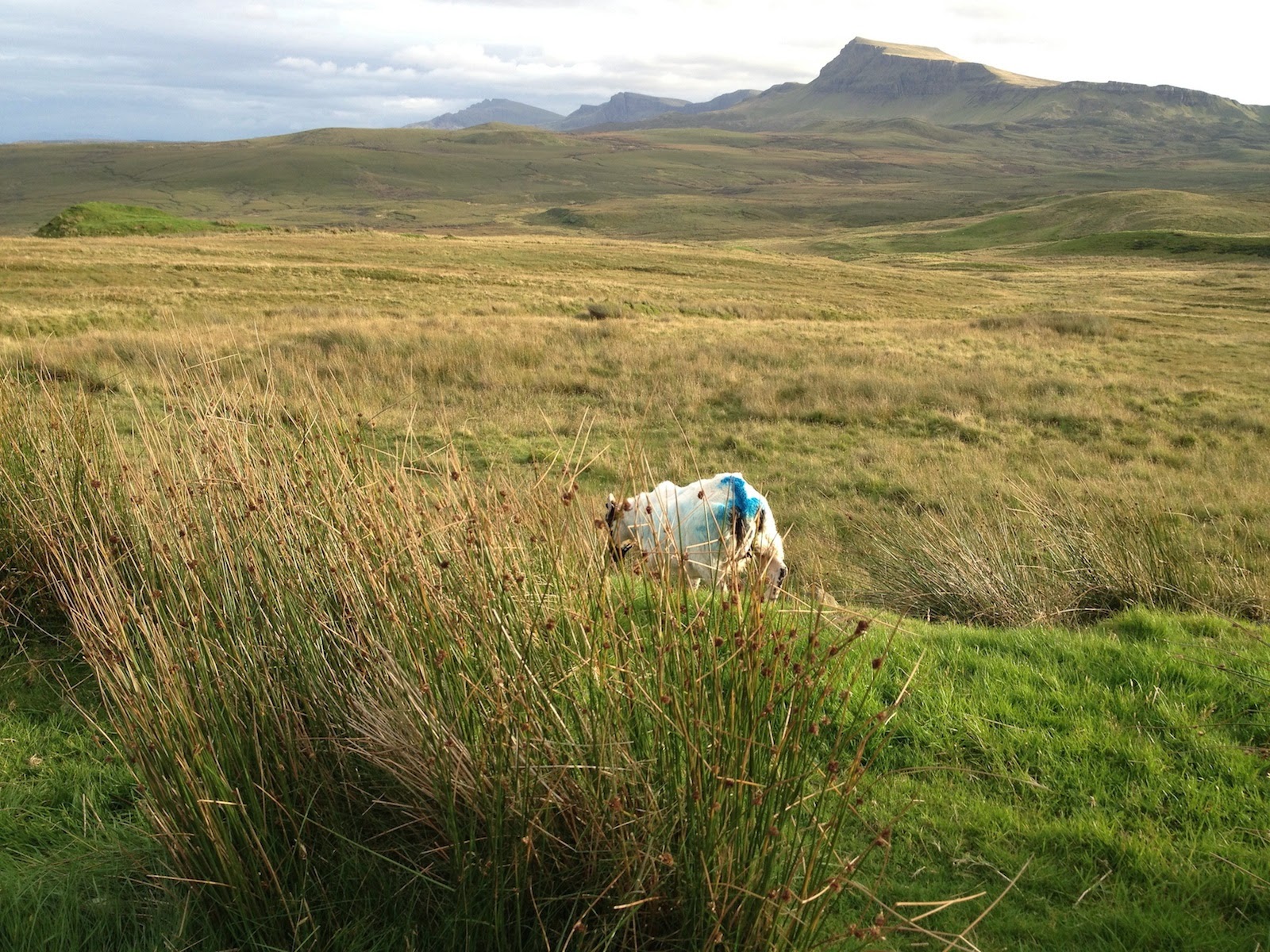 I was trying to think back to how I became interested in sheep. My first association of sheep comes from a lovely piece of needlework my mom created for my sister, Christina. It included either Christina's name meaning (follower of Christ) or a verse from Psalm 23. But it also included two white sheep done in French knots. I remember watching my mom do the French knots and being fascinated with them. The piece hung in my sister's bedroom for most of her childhood. 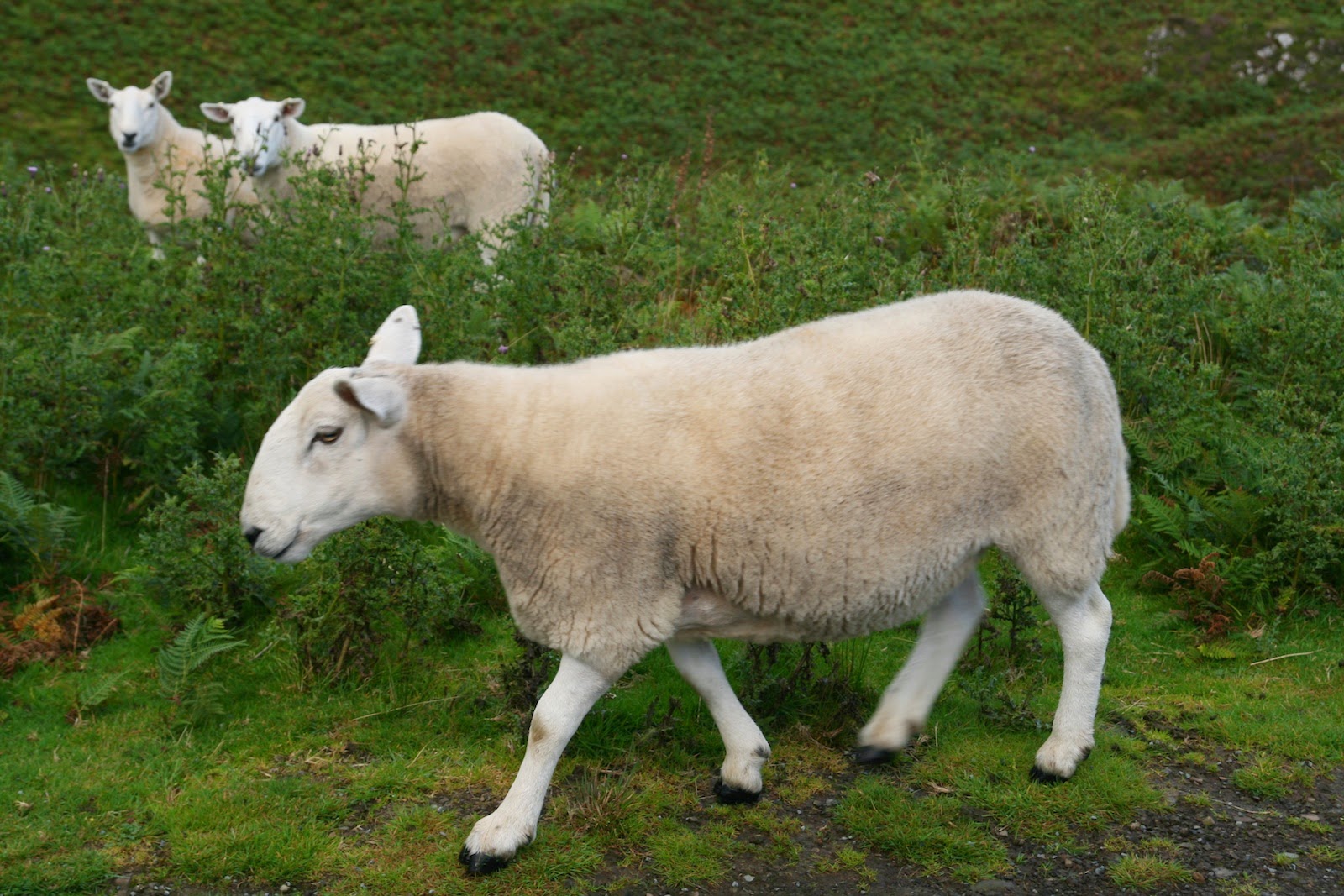 Then I remember my dear friend, and former employer, Mrs. Blackwood's obsession with sheep. She too had to get the car stopped for every sheep she passed -- and that was in the days of real film that had to be developed! She had sheep art all over her house. 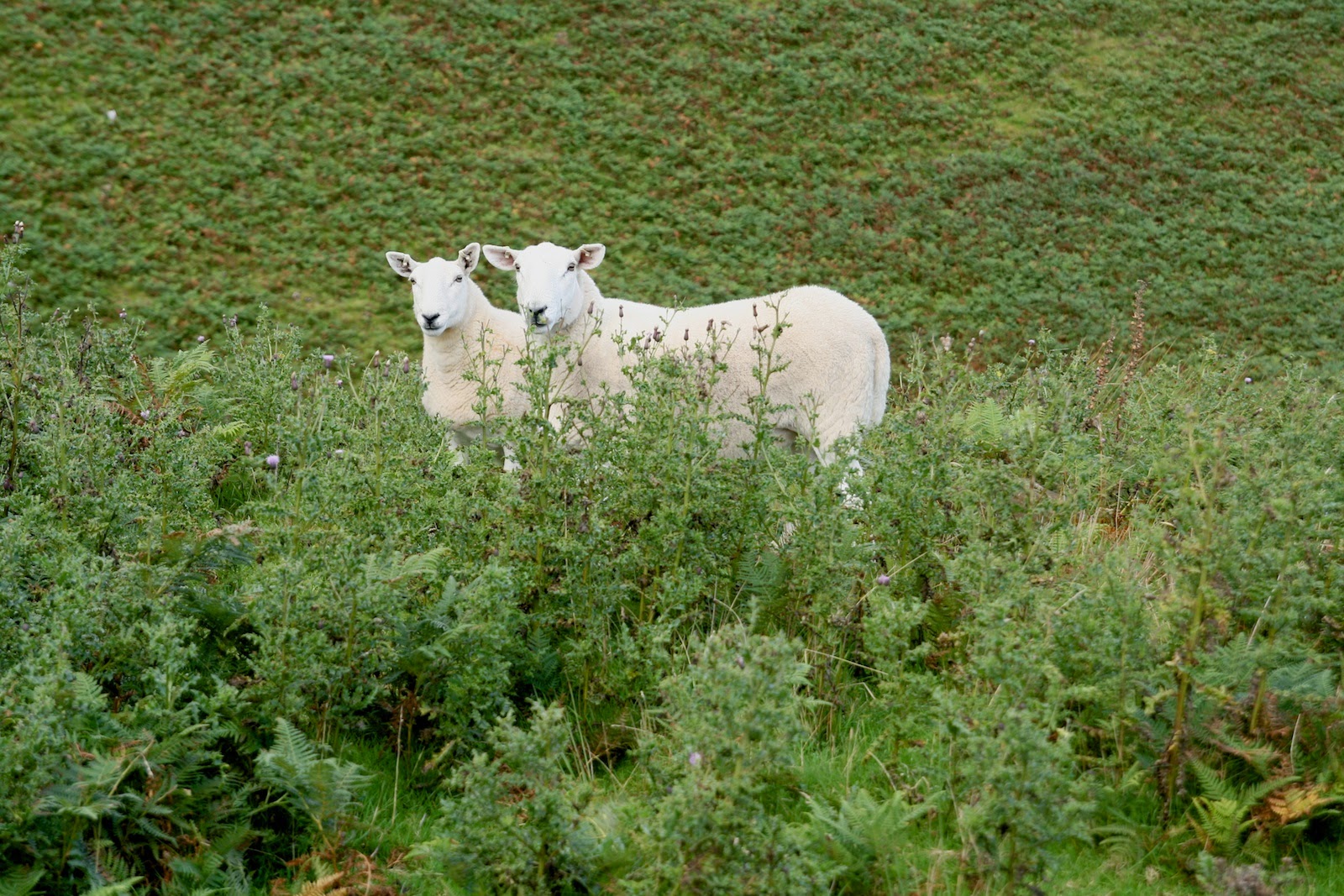 Then my mom and sisters and I made it to Scotland for the first time and I think we all fell for the sheep. 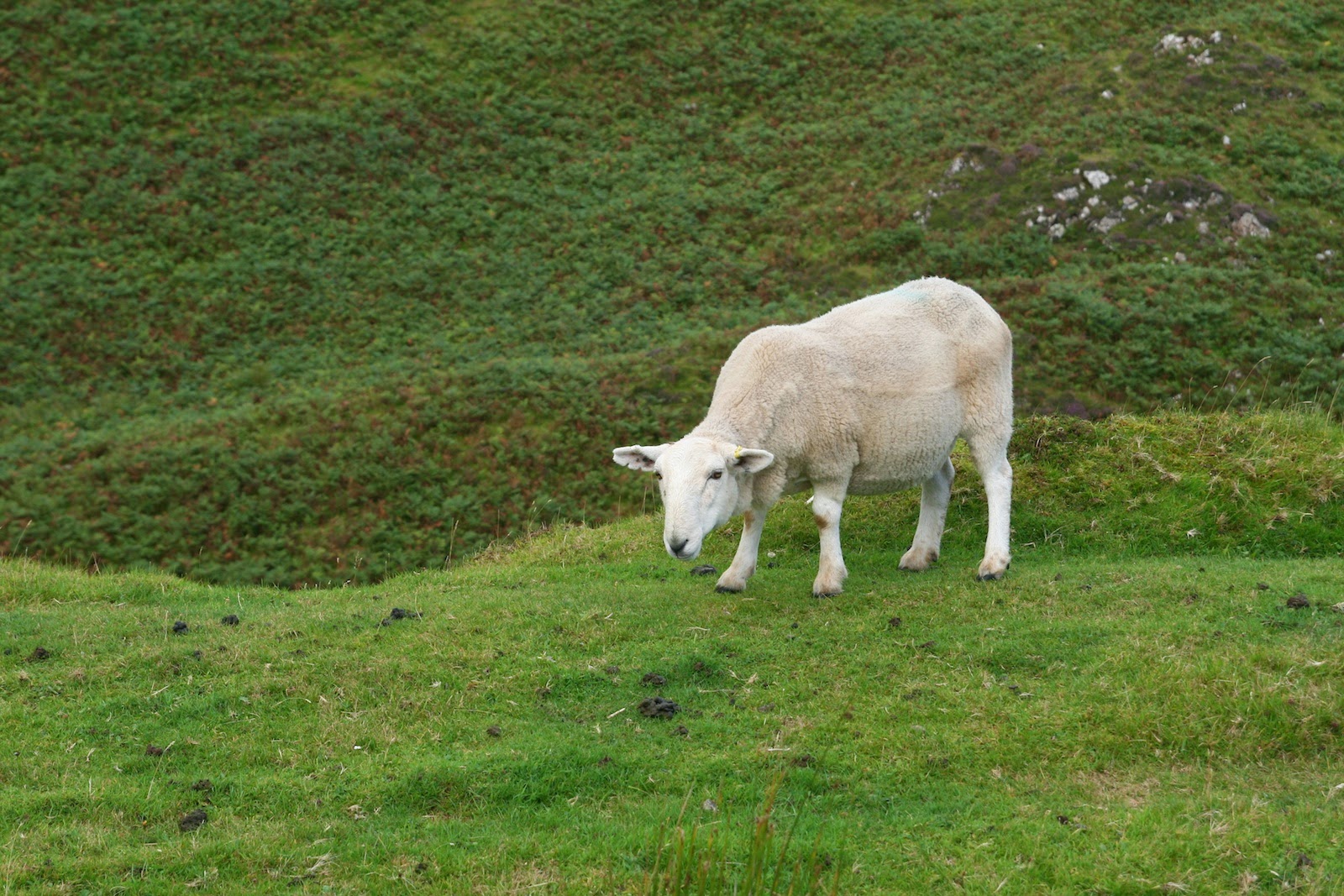 And my mom started painting sheep and the more she painted them the more we loved them. 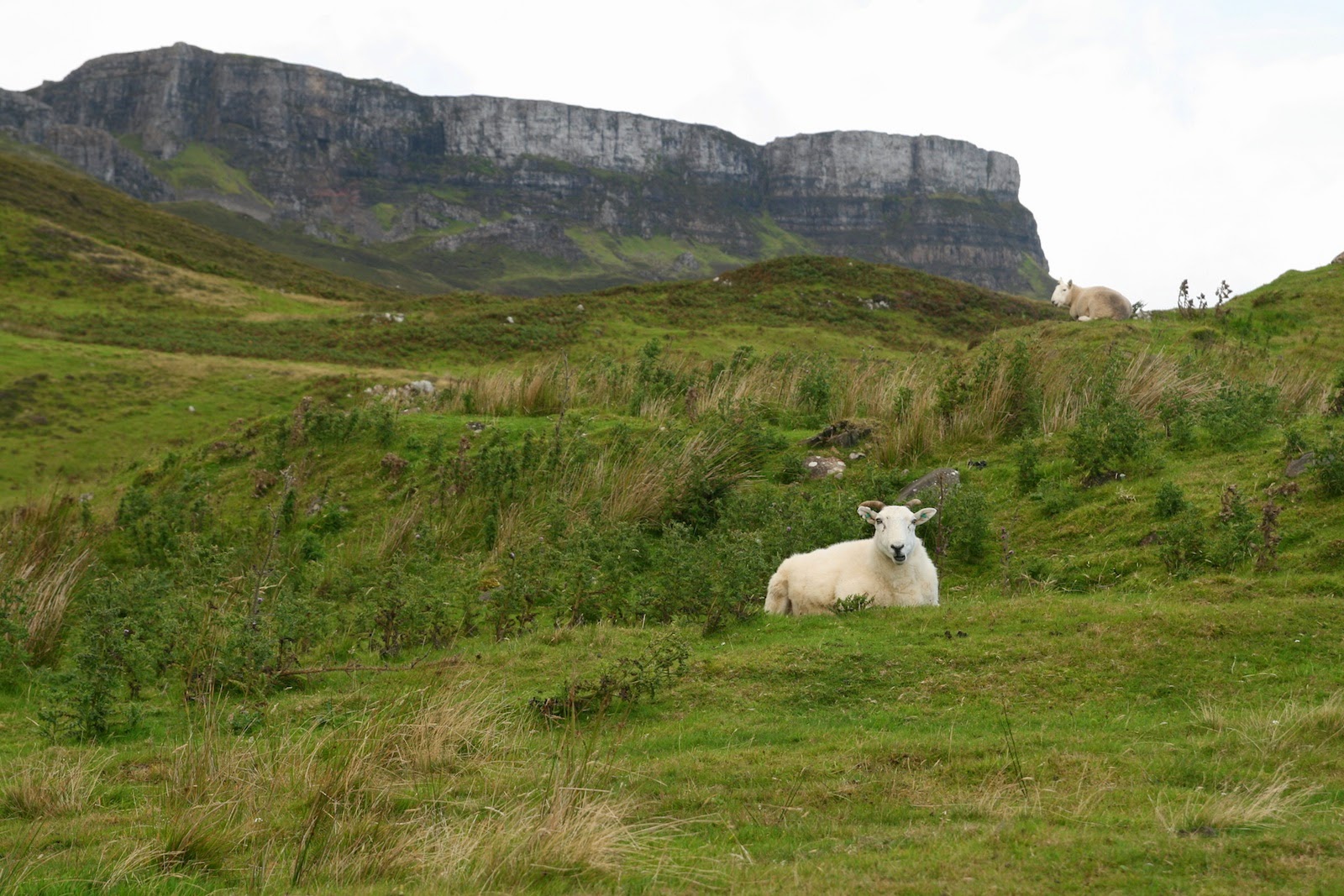 Then my aunt started raising sheep and my mom had even more fodder for her paintings. 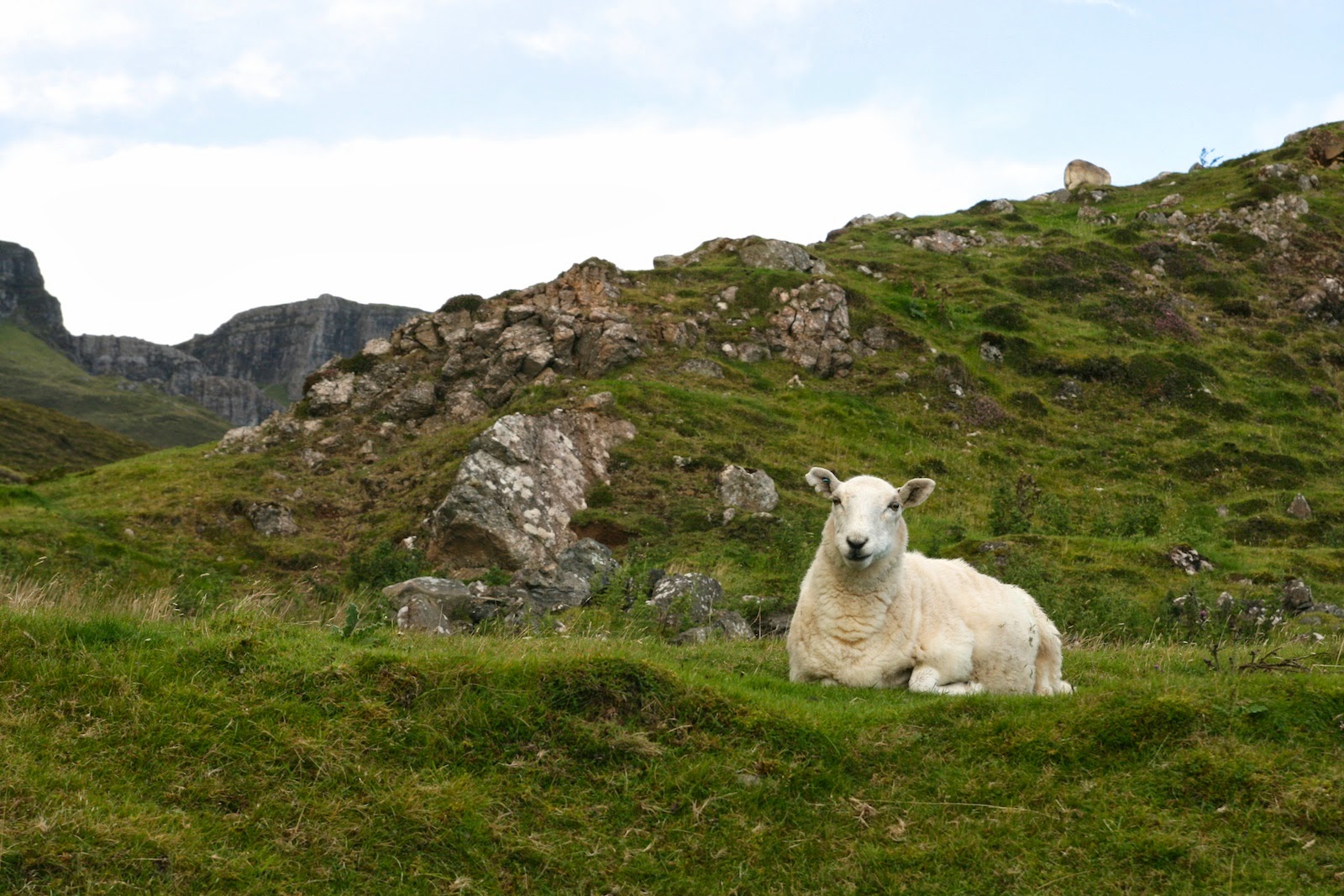 So somehow we are hooked on sheep. 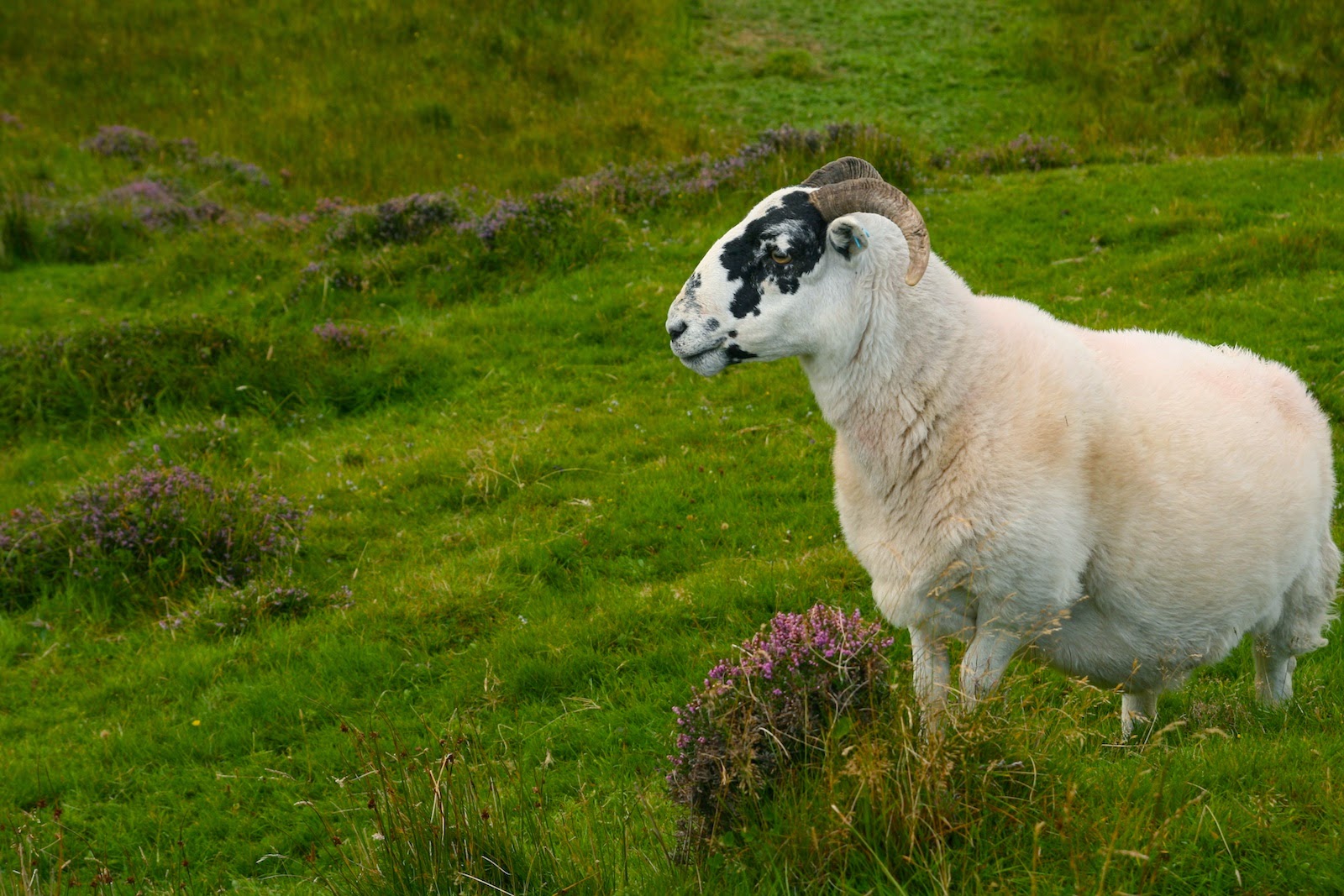 It appears other people in the world are too. 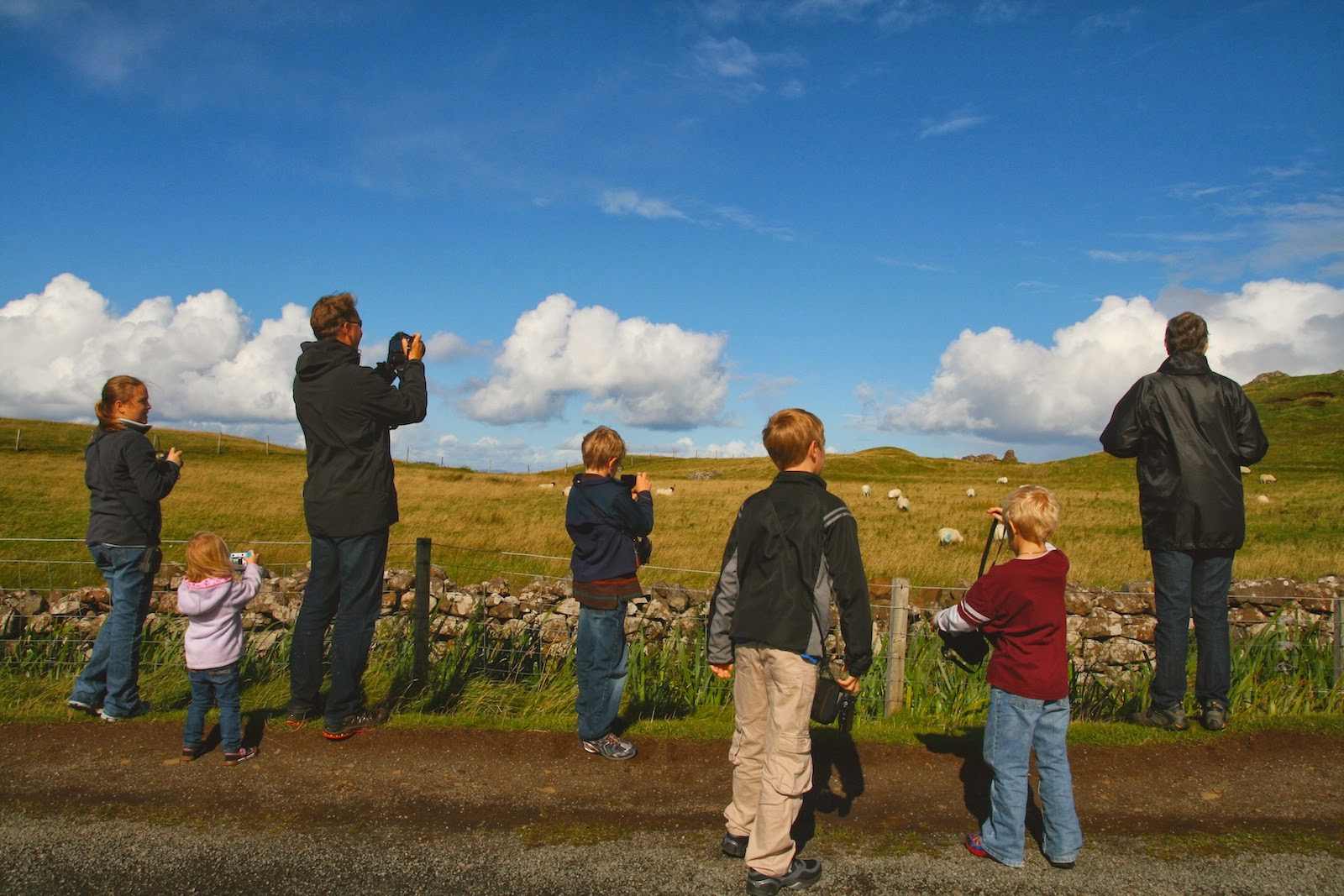 Don't these sheep have a beautiful life?!!! (At least when the sun shines!) 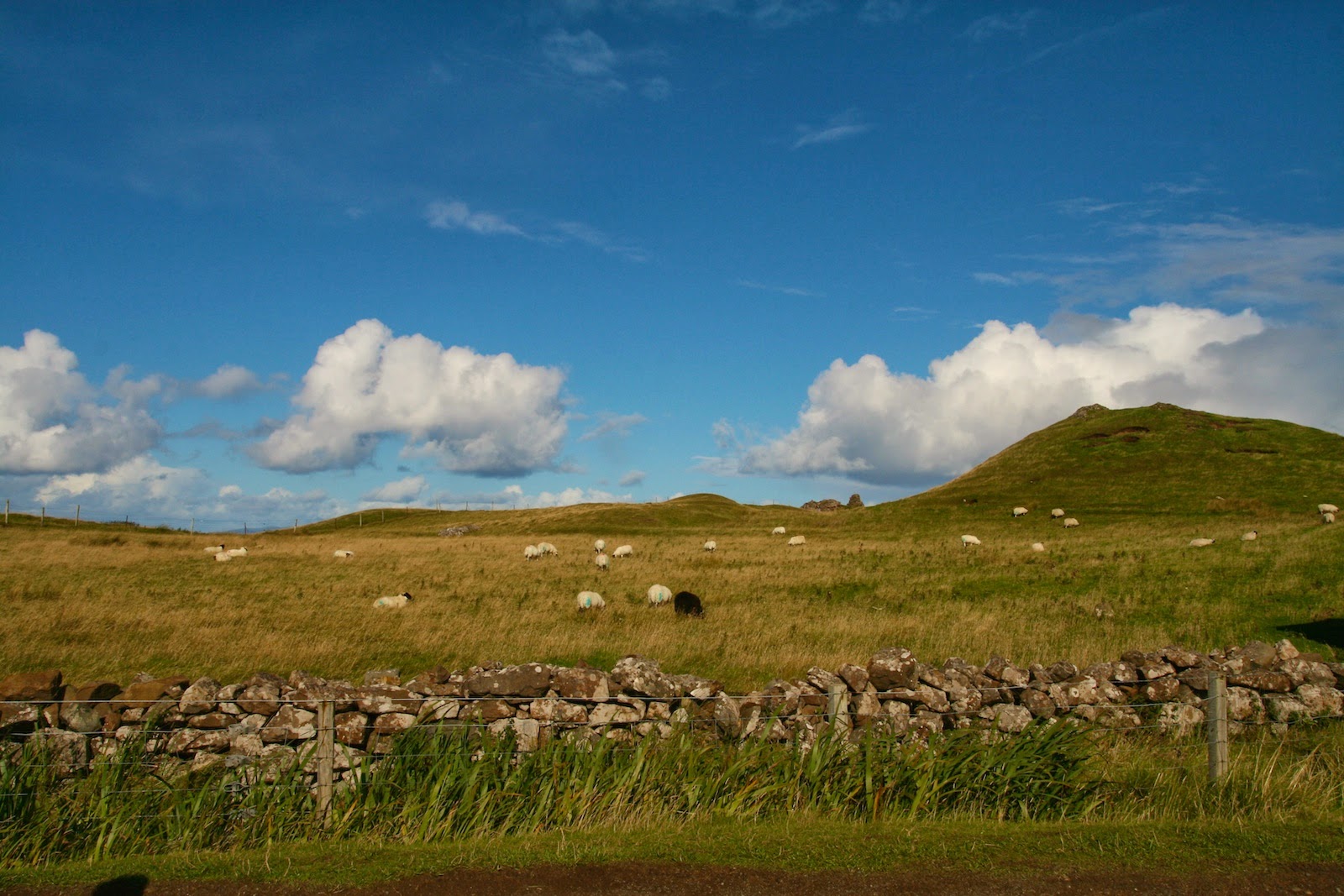 Here is the littlest safari member: 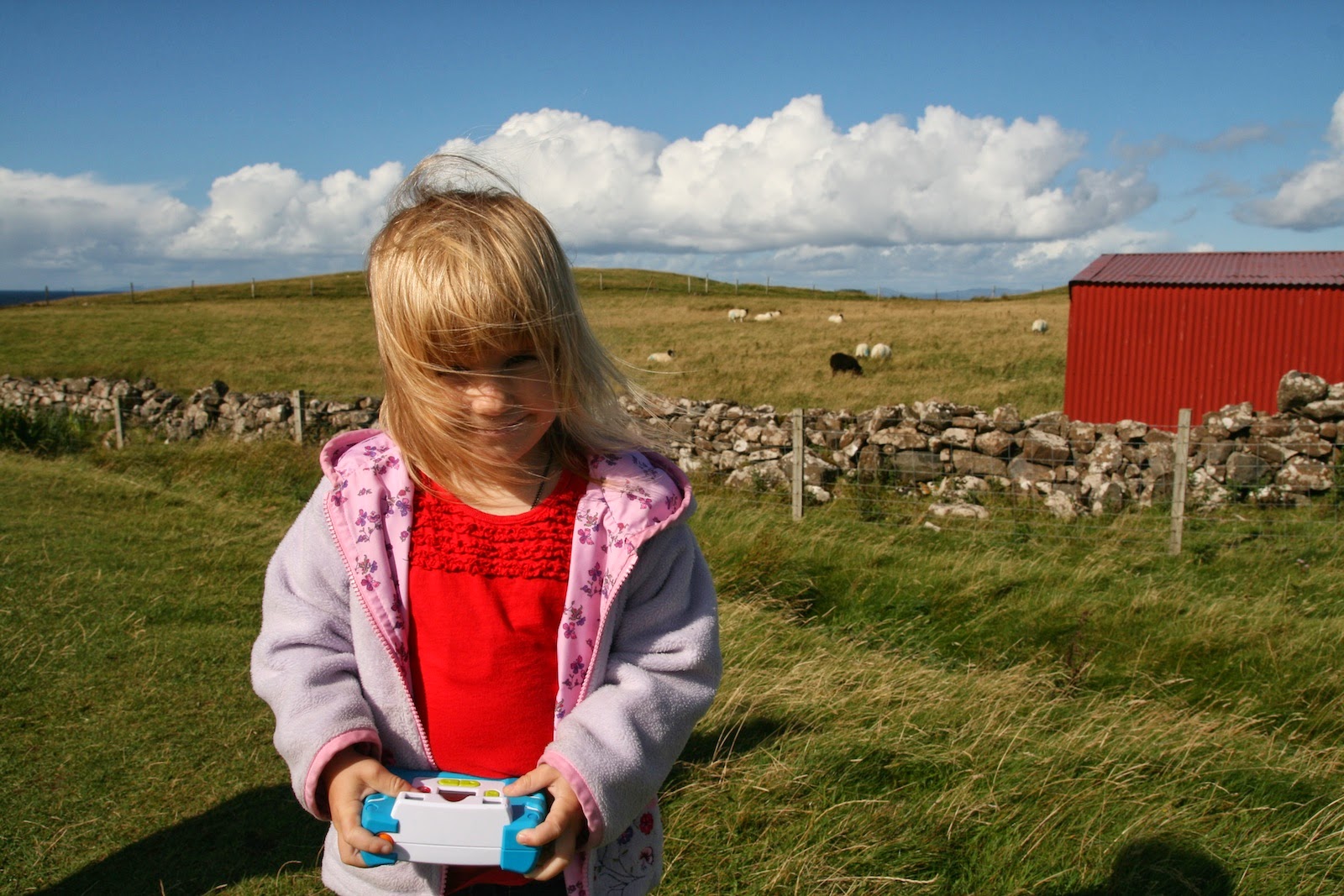 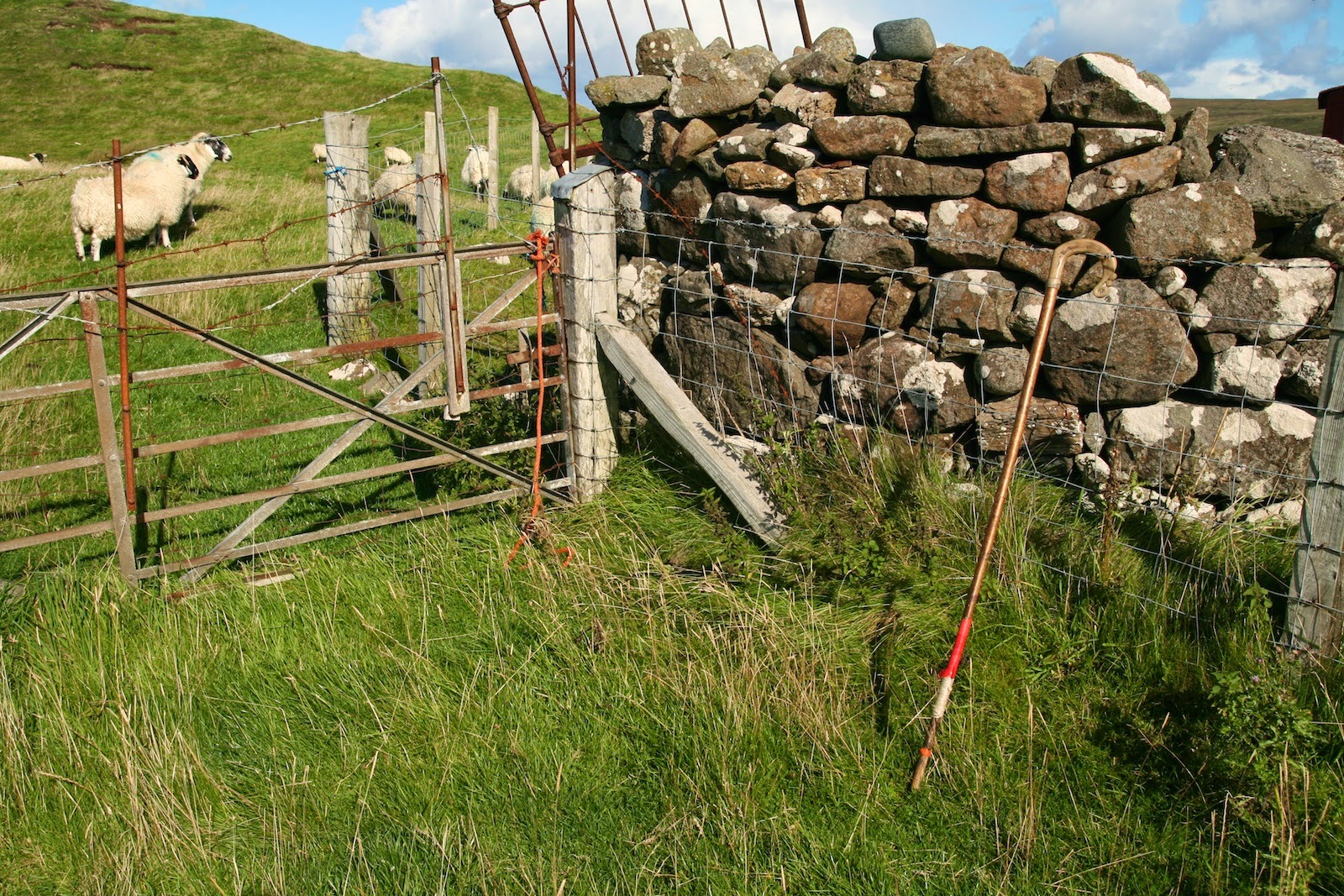 A little height makes for even better pictures! 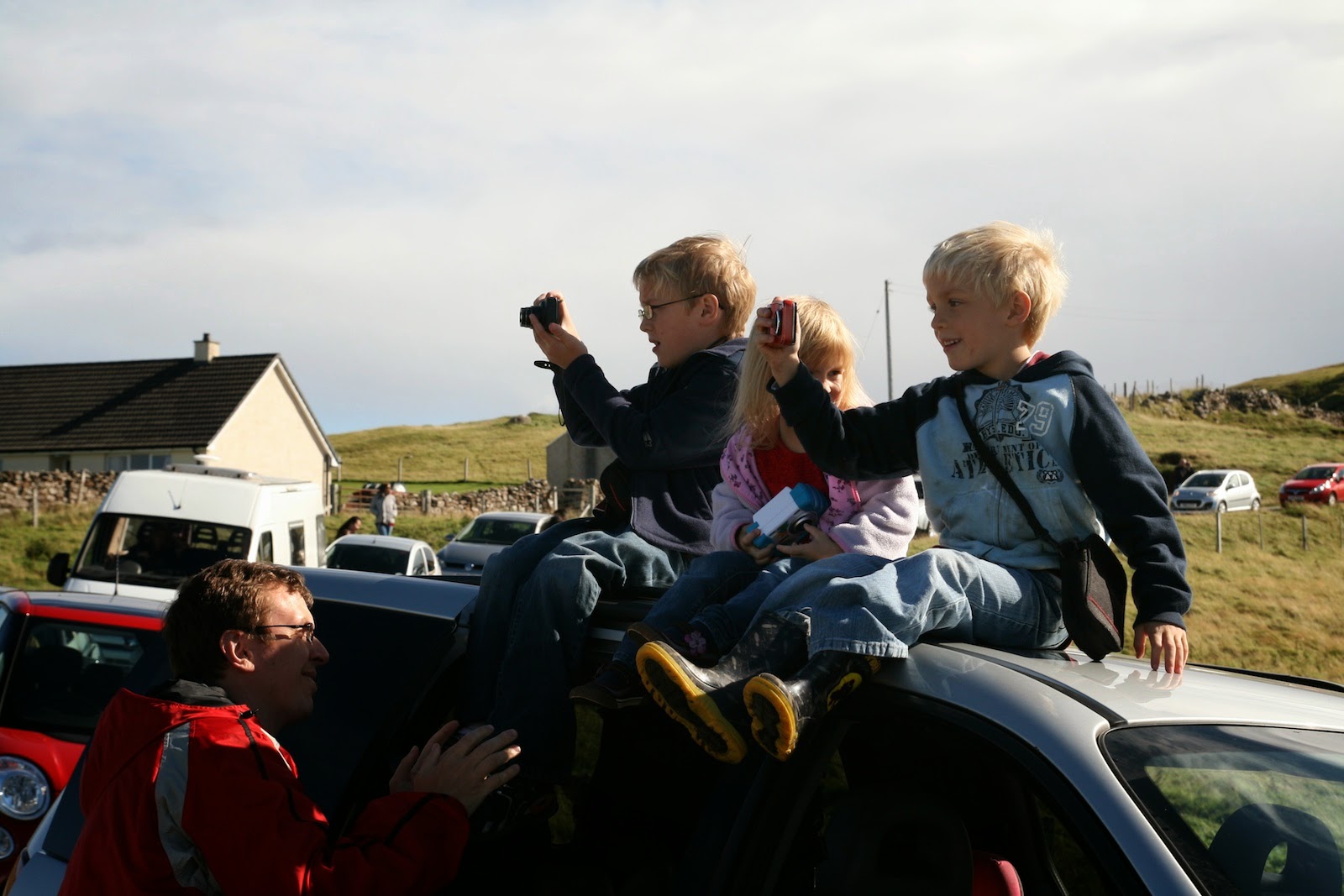 The sheep are everywhere you drive..... 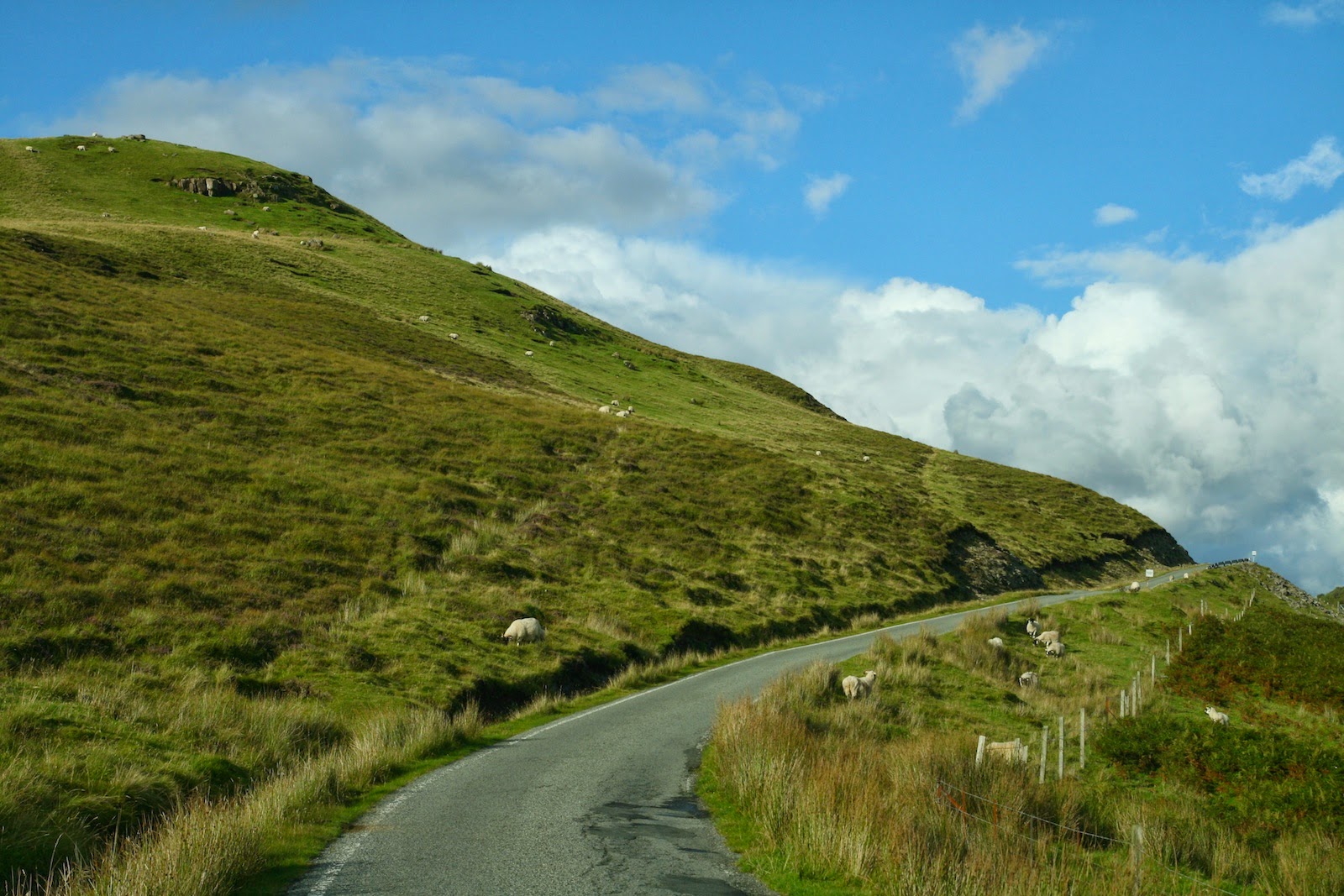 It turned out that at our Cumbernauld house we were staying on a farm that raised rare breed sheep. One of the highlights was getting to help move the sheep from the pasture to the barnyard (another post!). 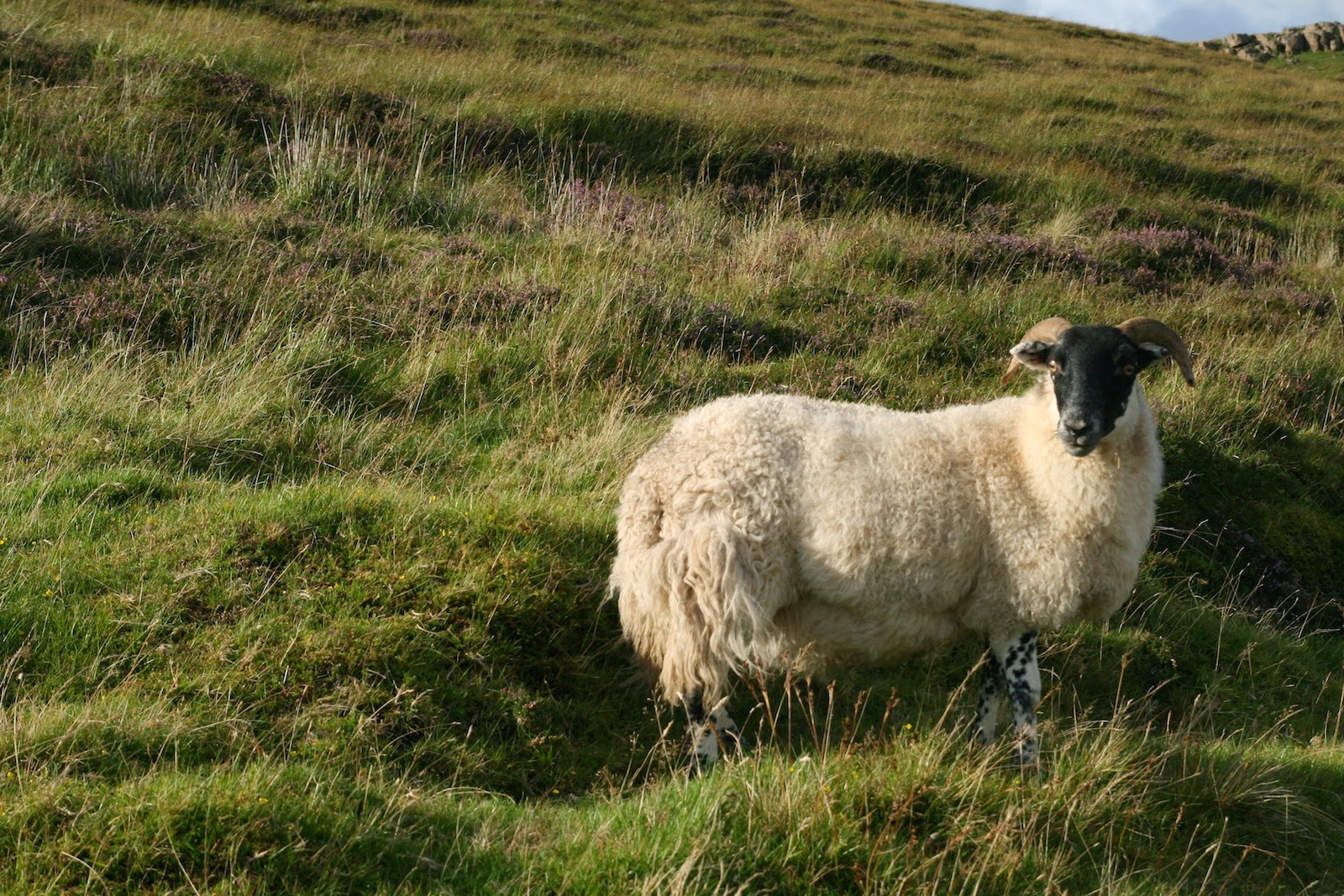 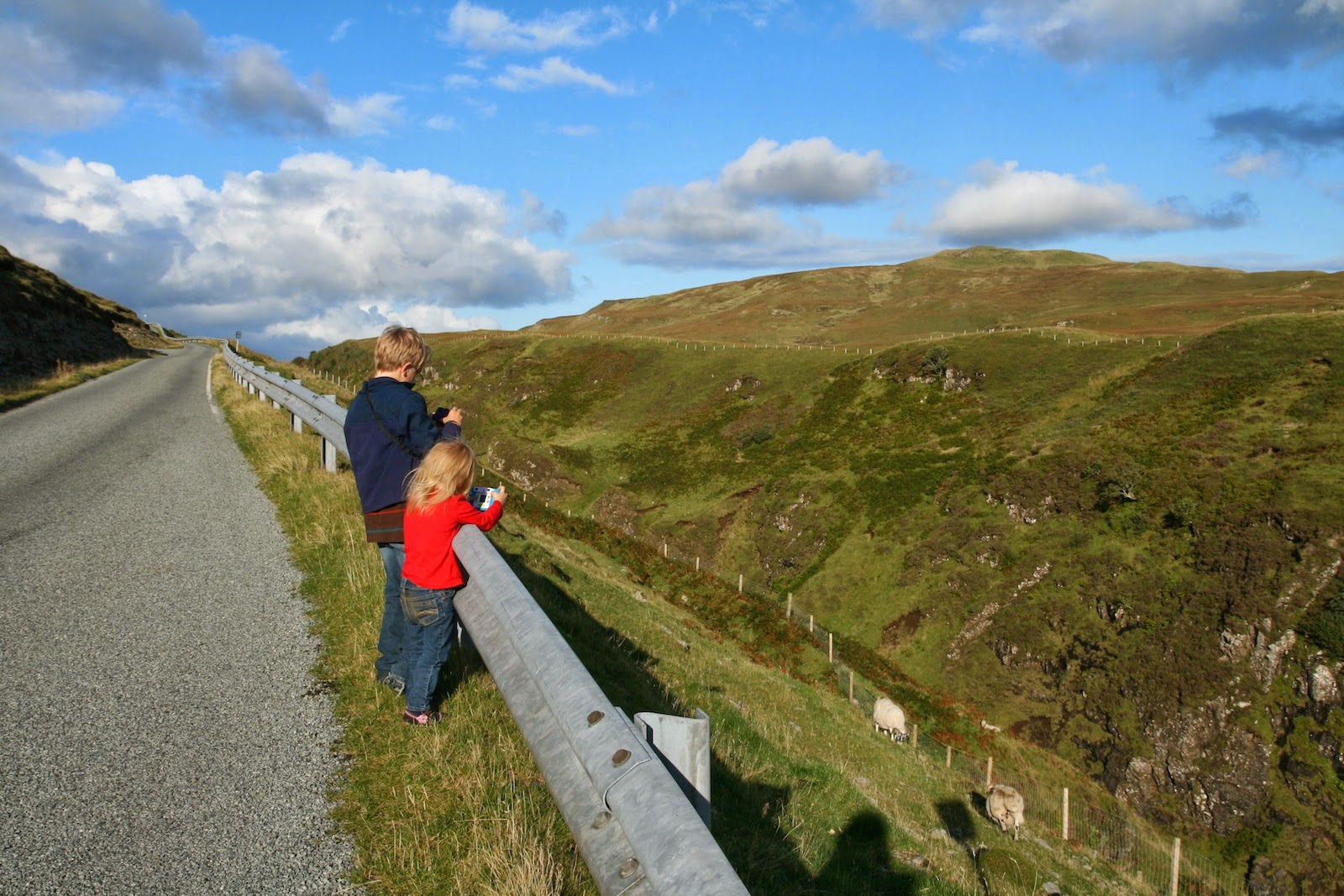 Hard to get over the beauty of the landscape and how much the sheep add to it. 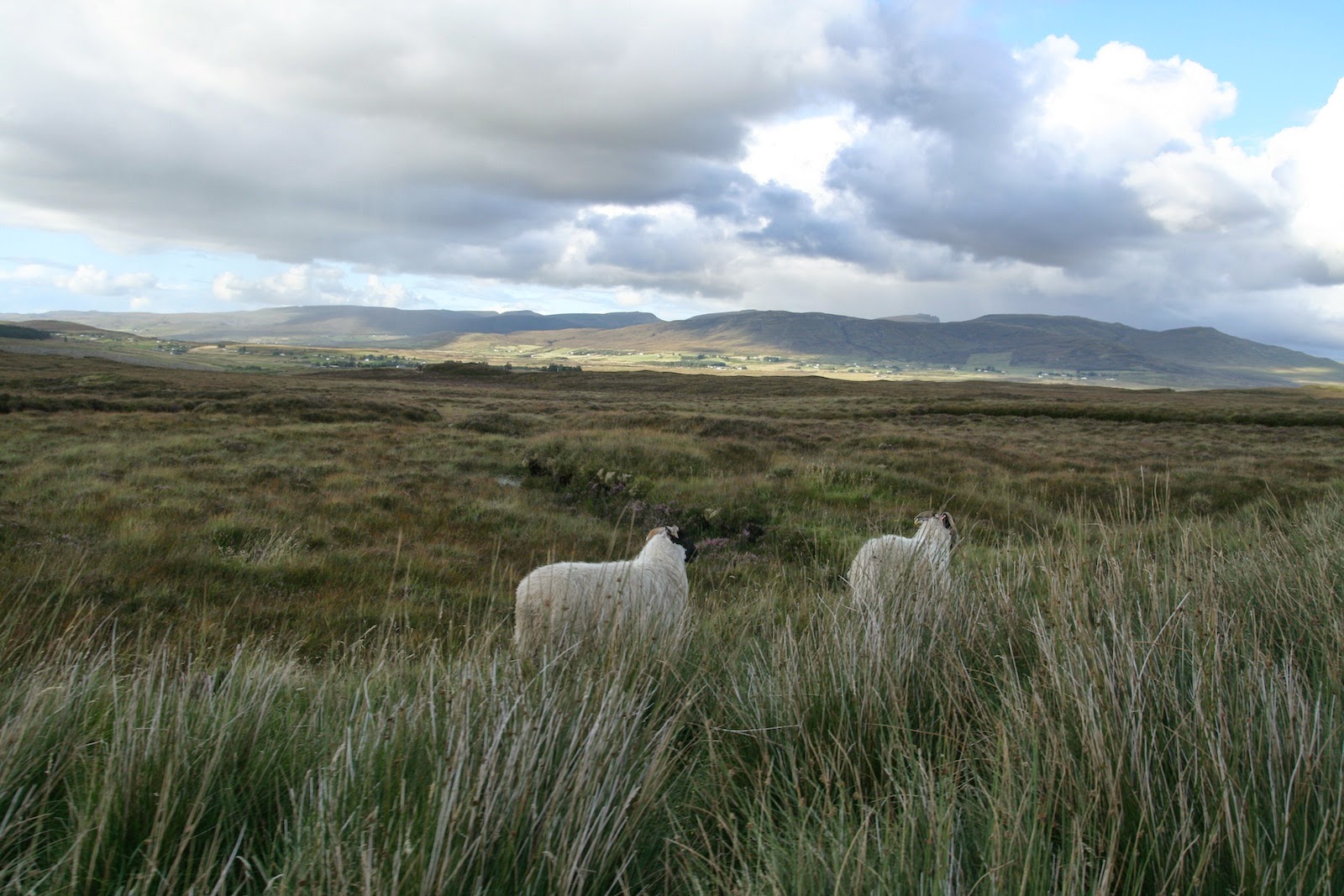 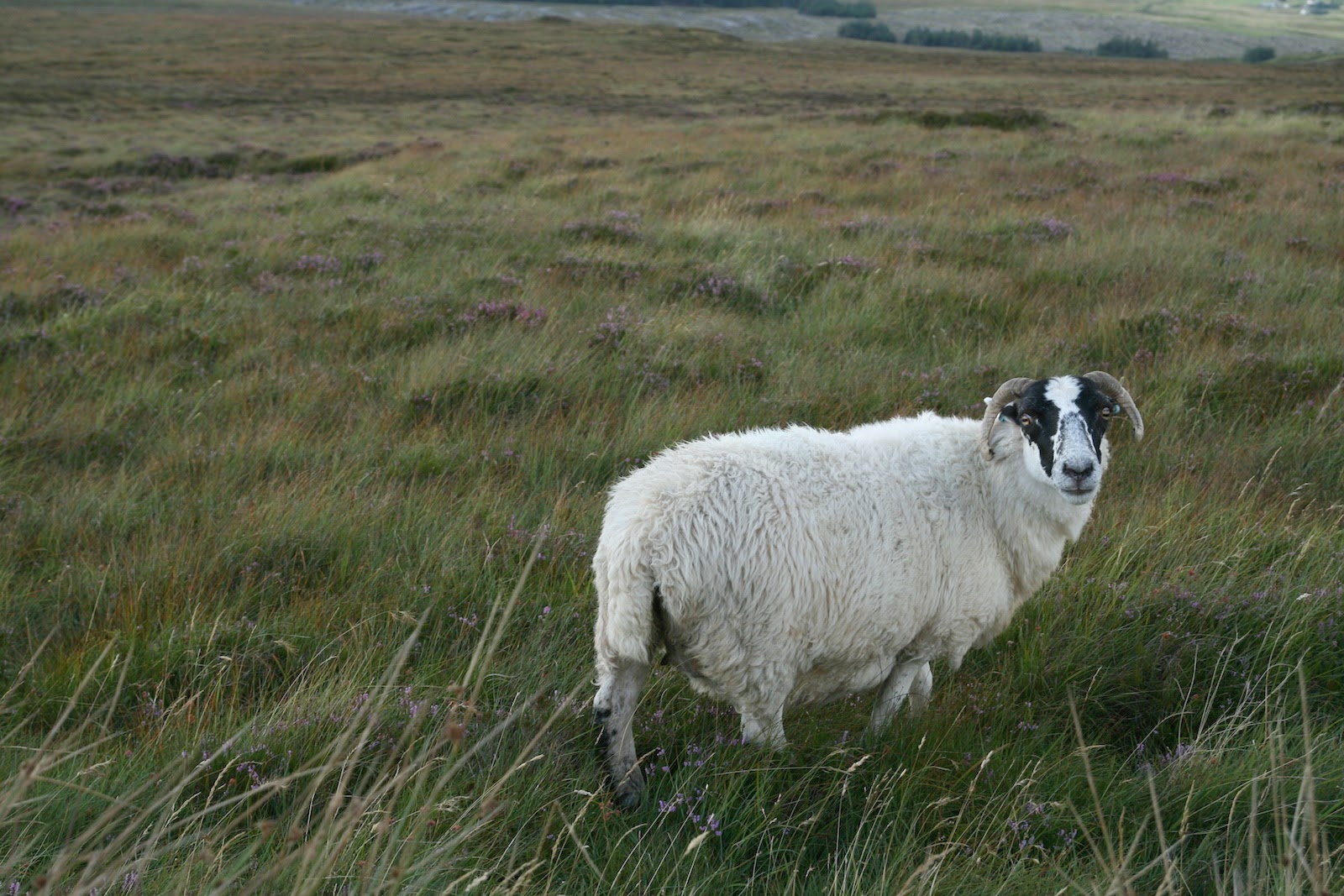 Of course sheep in the road is the most fun of all! 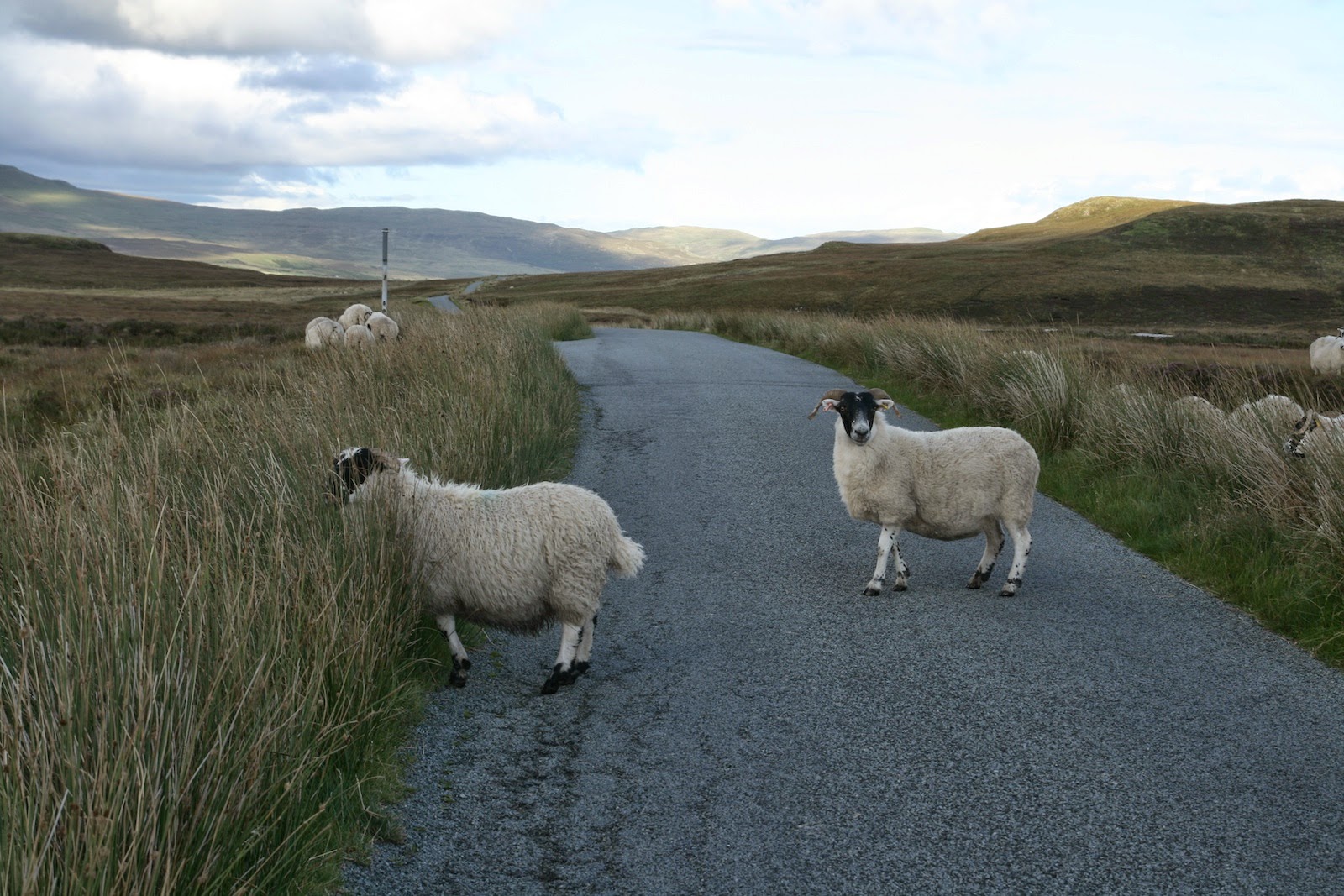 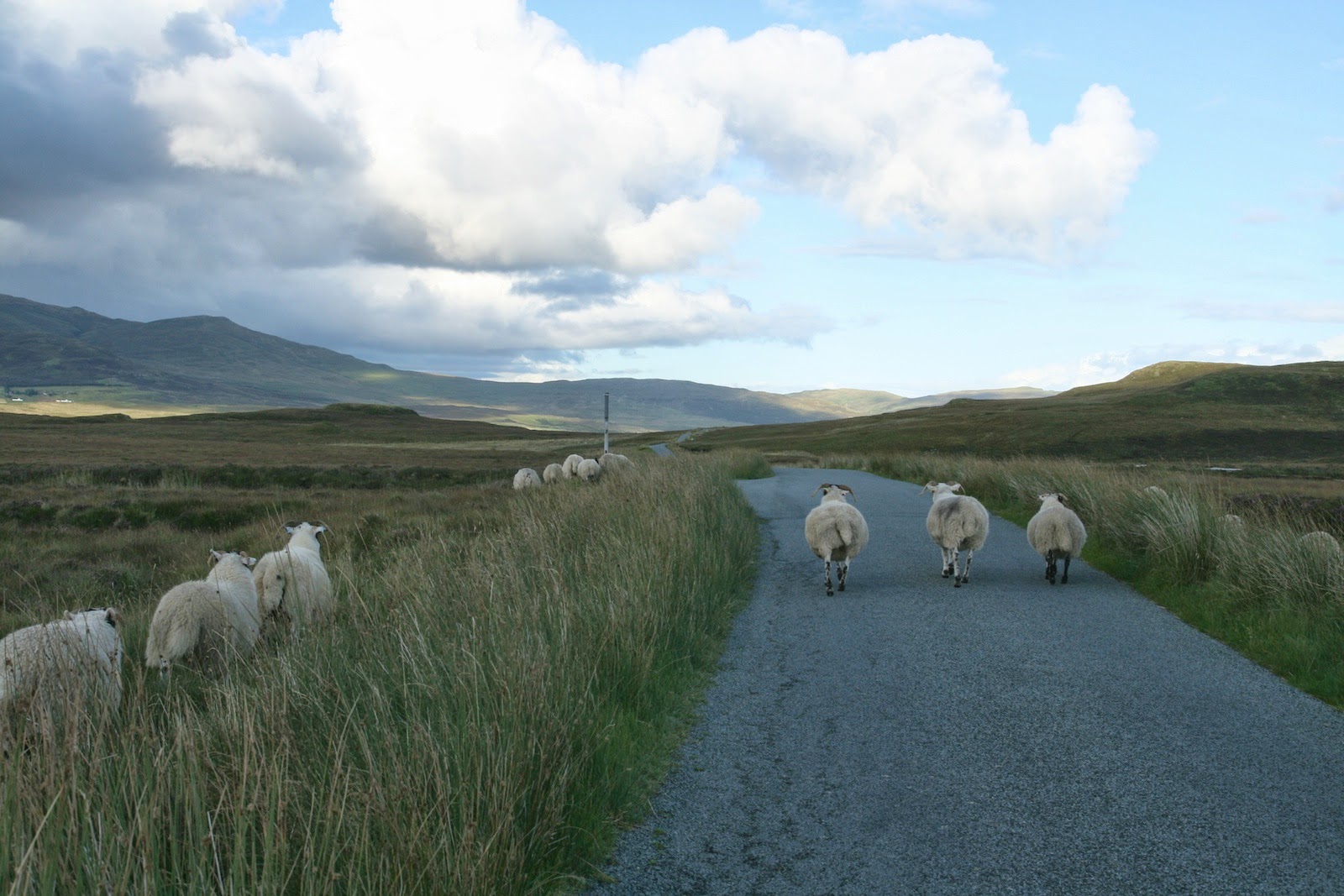 Aren't they too cute? And look at that peat bog behind them -- you can just see the long strip where the peat has been cut away for fuel. 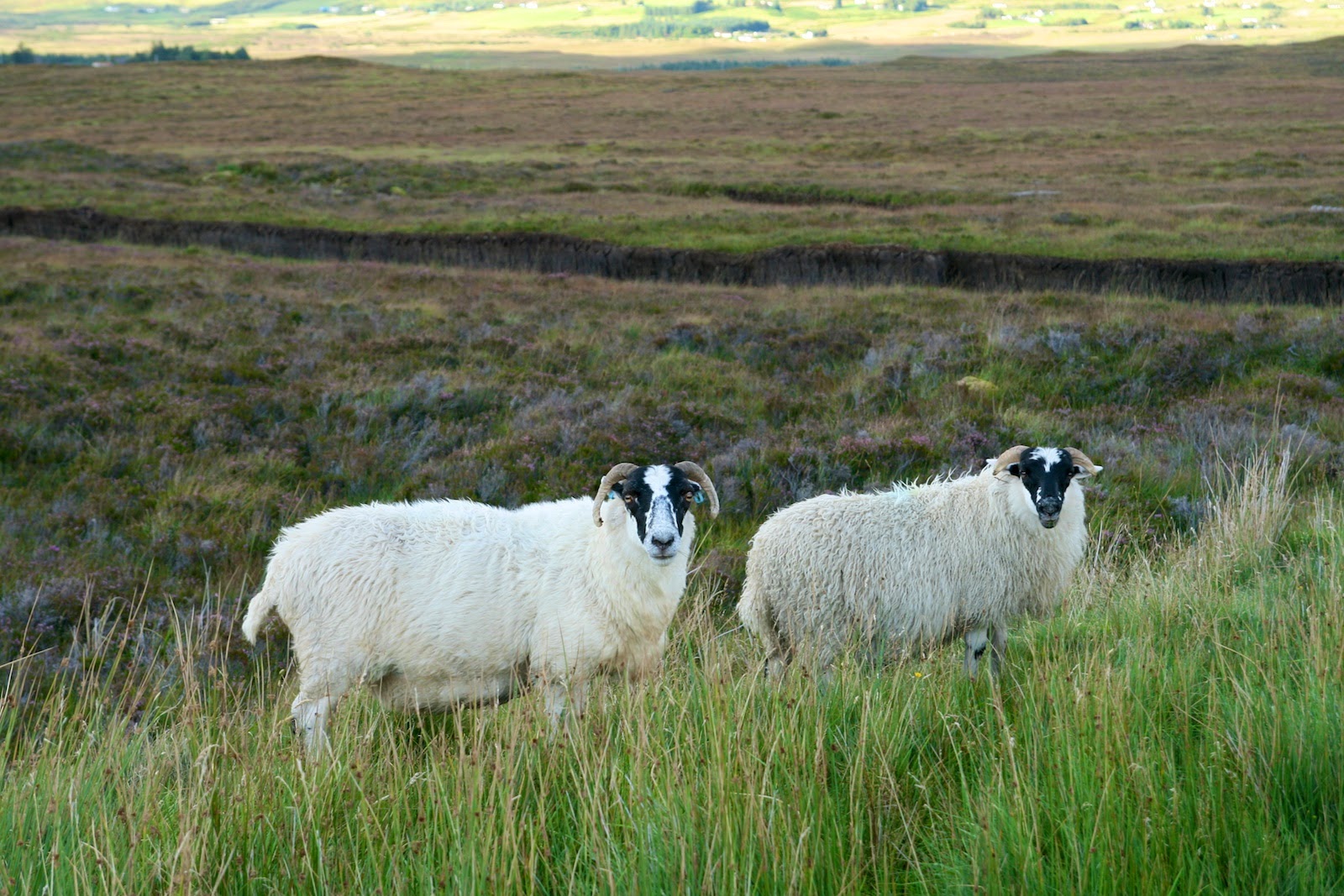 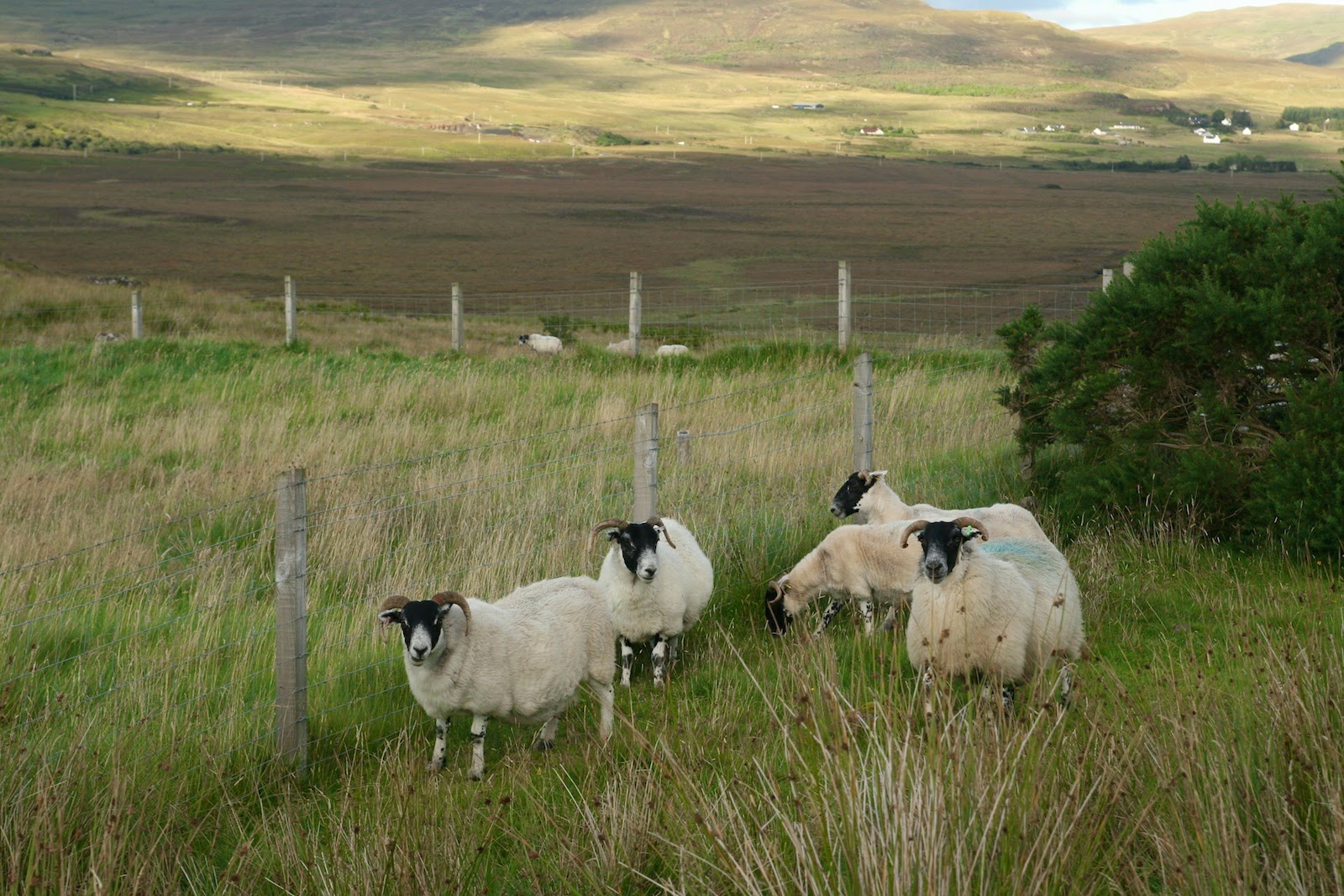 There's "our house" in the top right corner of the picture. These sheep were our neighbors. 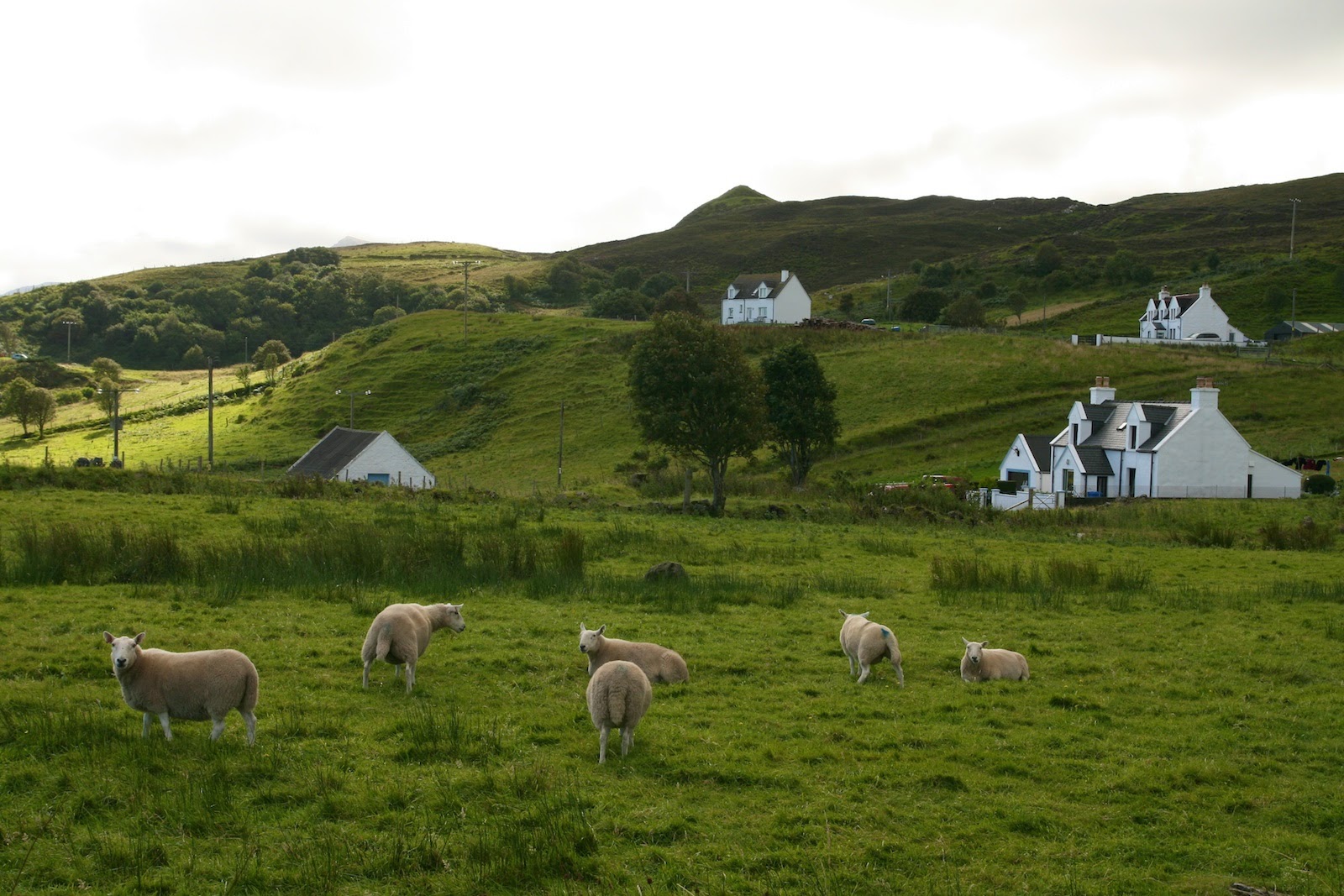 And in places like Skye, or Scotland in general, these kinds of signs are a necessity!!! 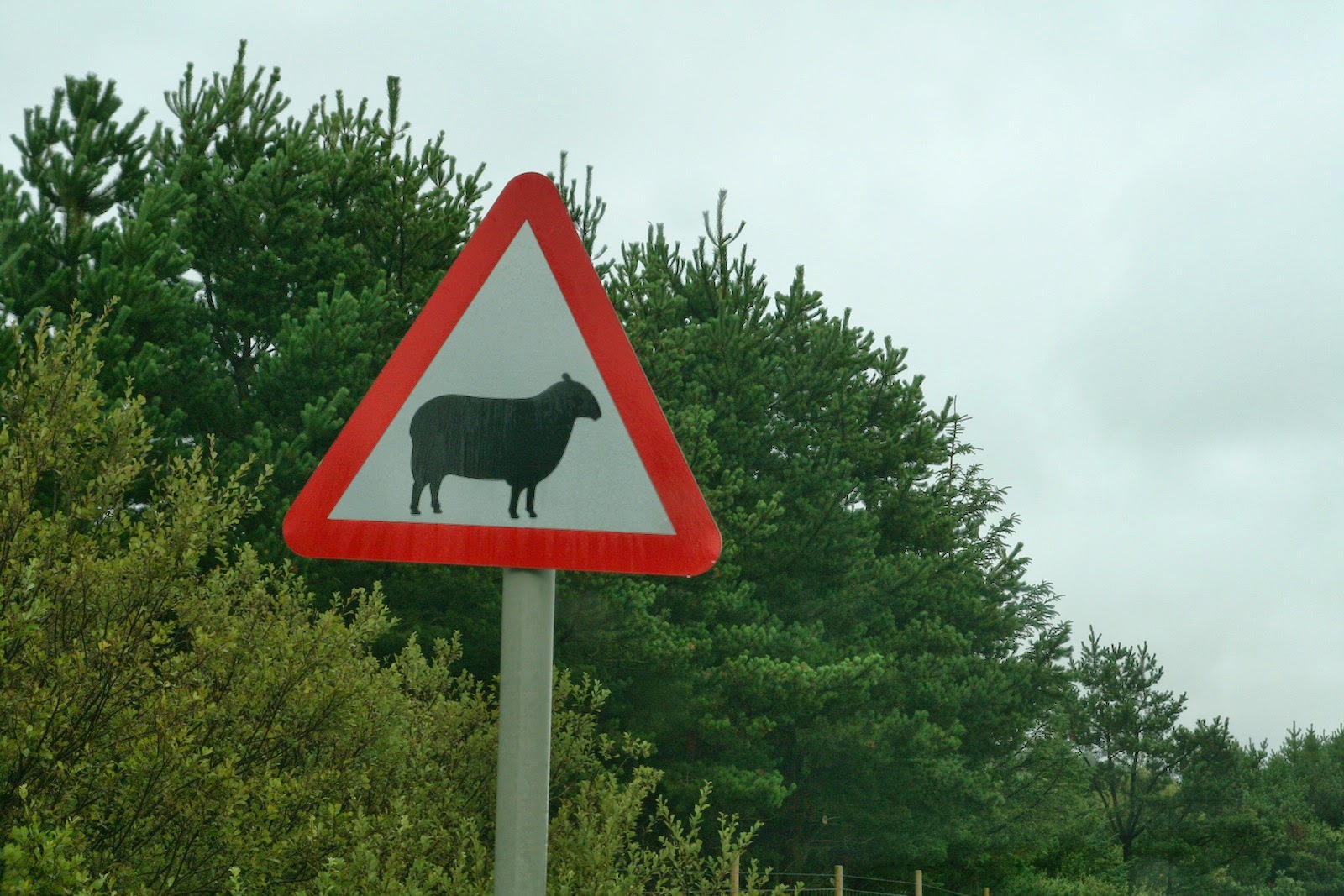 So those are the sheep. But there are still so many things to show you about Skye. Next time I'll take you on the hike that was one of our two favorite memories of the trip.
Posted by Heather L. at 8:47 PM

If you like sheep that much, then you need to come to New Zealand. Seriously! Pretty pictures.

Beautiful pictures! I never realized Scotland was that gorgeous. Of course the sheep add to the charm.

Love it! So are people actually able to make a living from their sheep there? I'm hoping with the work of some friends of ours that Portland will be allowing sheep within the city soon. They are working hard trying to get public works to use them to cut the crass particularly in graveyards and public spaces. I love the green.

And - a quilt was exactly what I had been thinking for my scraps, too!

I remember the first time I drove in Scotland, someone warned me not to underestimate the tendency of sheep to assume they own the road. And it's true. They really could not care at all about cars!

I love the symbolism of the Good Shepherd.

You should check out Willie Fulton's paintings of sheep: http://www.williefulton.com/gallery.html

Lastly, about the paint on their fleece, a friend's uncle was a sheep farmer and for a joke he painted some of his sheep tartan!

Love it Heather... My earliest memory of my love of sheep, was a photo I gave to my Mom... one sheep in a field... she was sick with Cancer.. I told her that was her... and God was her Shepherd... little did I know How That Shepherd would guide and take care of me... I consider myself ... a sheep in His care...I have lacked nothing!.. love all the pictures.. we will have to paint them... xxxxx