It's very much feeling like a different season of life around here. I'm not sure where the boundaries of this stage began. I think one never knows. At each stage of my children's lives my crafting has taken on a different look.

When they were babies I only dabbled in knitting and once in awhile sewed something. The elementary years proved to be a boon for me. I managed to find a lot of time for hand sewing felt flowers by the dozen and cranking out knitting projects by the basketful (well, not quite).

By the end of this summer I will have two teenagers and only two children left in elementary school.

The crafting has again taken a turn. There is less hand sewing, less knitting, a bit more machine sewing, and more tea cozy crochet (which requires little thought and can be done nearly anywhere). Mostly there is more reading because I'm finding that to keep up with the energy demands of these busy teens/older youngsters I have to do nothing but read when resting rather than just taking time for me to go and do my own projects.

I have a number of crocheted tea cozies waiting to be finished. I did complete this one as a wedding gift for my cousin. 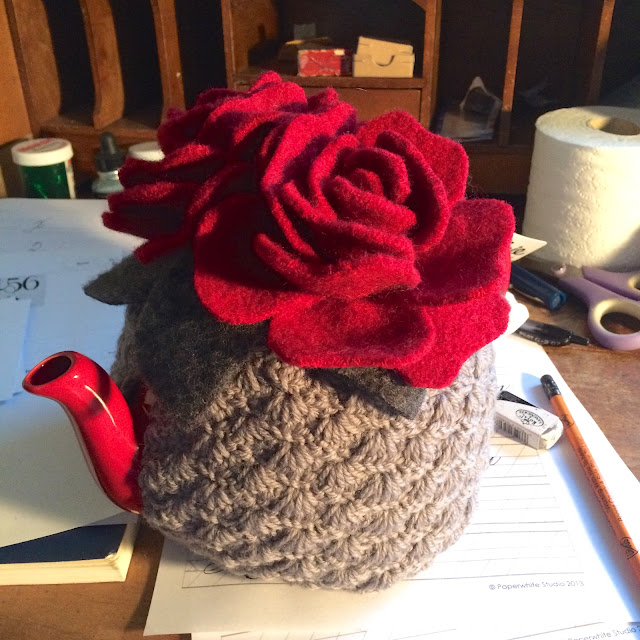 And I sewed up a few of these cute bunnies for other gifts. 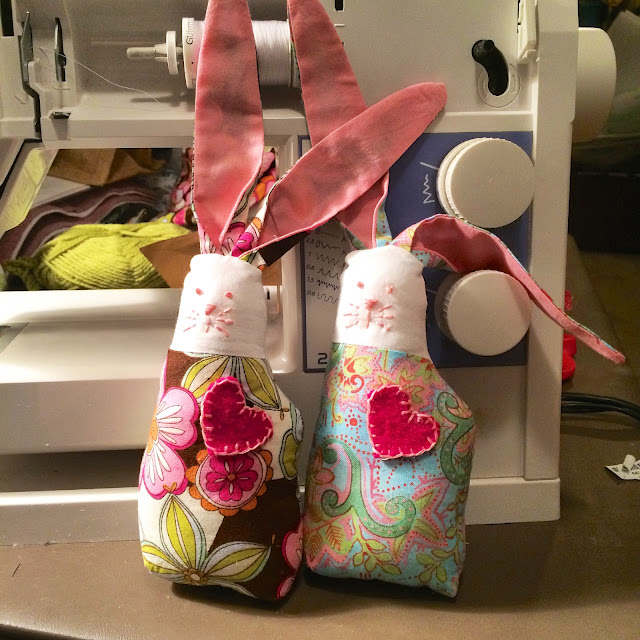 I've had these quilt squares cut out for years but this summer I pulled them out, laid them out, and collated them into piles for sewing. This quilt is based on one of Jane Brocket's. 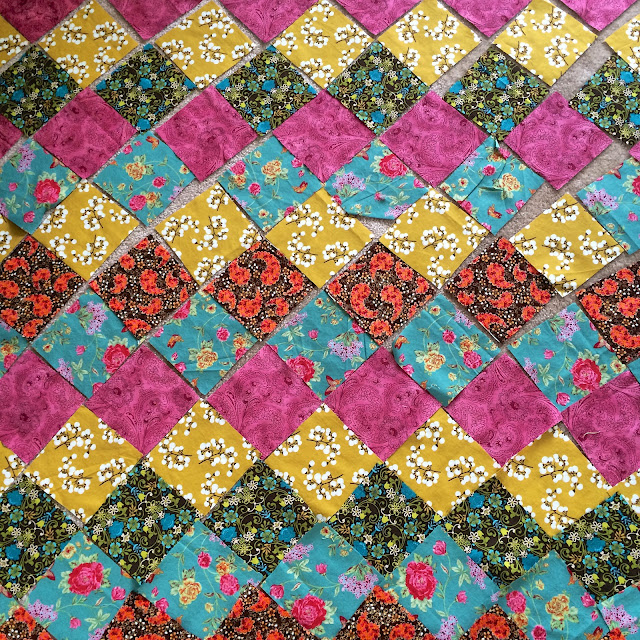 I'm also hard at work trying to finish up a quilt for David's birthday using these vintage star pieces I found at Goodwill by the Pound last year. I have the top all sewn! I hope to put the quilt together this week so I can start tying it as soon as possible. 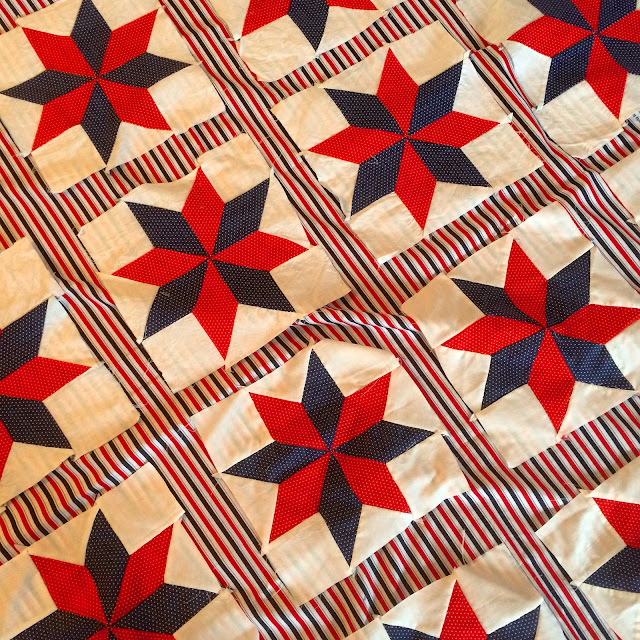 Gift-giving is a big motivator for me to get into crafting mode. Here is another gift I made this past month, modifying the pattern for Maggie Rabbit from Posy Gets Cozy. I used a felted sweater instead of wool felt. 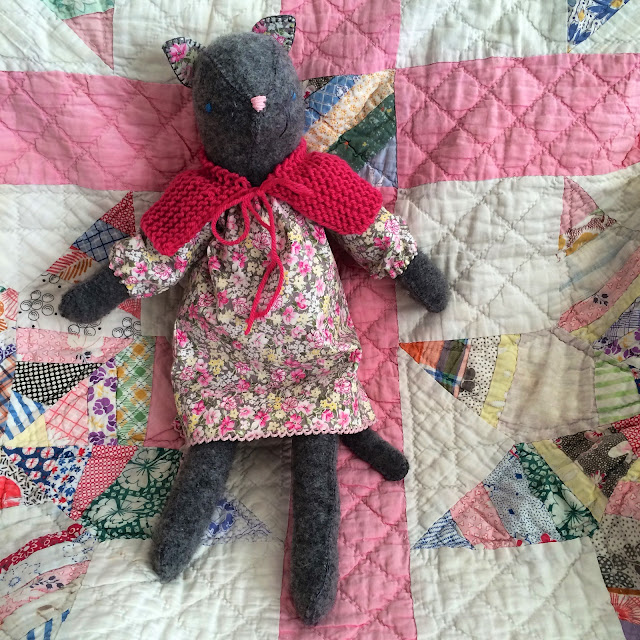 I made this in May for a baby shower gift. I loved utilizing bits of my Harris Tweed stash and other pieces of wool I have as well as some very soft corduroy. The pattern came from a library book. 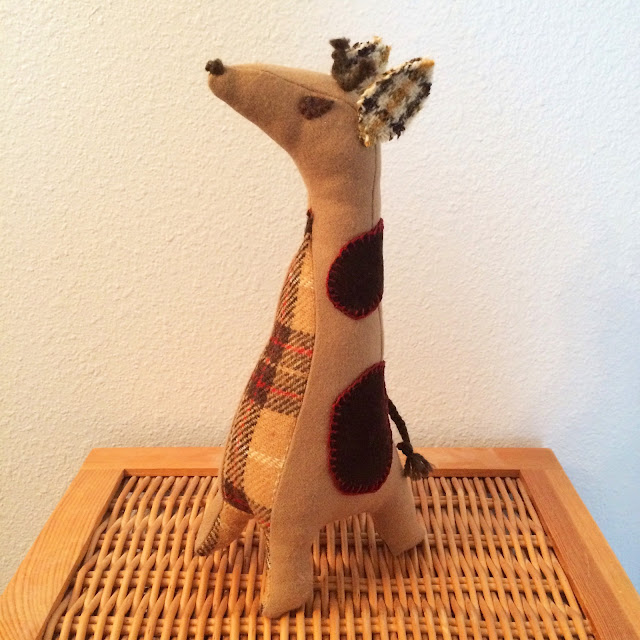 A Glass of Blessings: A Novel

by Barbara Pym was a book on my "wanted" list that I picked up in New York City. However, it did disappoint. I think the idea of a glass of blessings sort of showed up on the last page or two, maybe? Anyway, the book didn't appear to have much plot but rather just told about the life of an earlier 20th century middle class English woman. I've read better Pym.

Beyond Codependency: And Getting Better All the Time

by Melody Beattie. I read Beattie's first book "Codependent No More" last year and loved it. This one, if possible, is even better. I learned so much.

The Castle on the Hill

by Elizabeth Goudge was a good story of countryside England during World War II.

by Lois Lowry. Now this was a GOOD book! So good, in fact, that we listened to it on the way to North Carolina and then again on the way back!! At first glance you might be horrified -- there is talk of parents disliking their children and children trying to get rid of their parents. But, if you can take this as a comedy, the author is a genius at capturing the sort of everyday things that happen in families. There are also illusions to probably 15 other classic children's stories in the book, which makes it even more fun. And there is a happy ending for this "old-fashioned family".

Breaking Stalin's Nose by Eugene Velchin was a short book that gives a helpful look at the realities of communism from a child's perspective in the midst of an engaging story.

When Books Went to War: The Stories that Helped Us Win World War II

by Molly Manning was a fascinating read. Did you know that there was an organization set up during World War II to print and distribute hundreds of thousands of books to our soldiers? This book talks about how it was done, which books were chosen, and the incredible boost to morale this created.

All the Light We Cannot See

by Anthony Doerr is a novel that is popular right now. Again, a World War II story that alternates between a child in Paris and a child in Germany. It took me awhile to get into the story (more than 100 pages) but I ended up really enjoying it. And, it is so easy to read because all the chapters are 1-3 pages long!

In My Father's House by Corrie ten Boom. I wanted to read more about Corrie's childhood and the influence her parents, especially her father, had on her. This is a beautiful glimpse into a family from 100 years ago.

I Capture the Castle

by Dodie Smith was on my special list of "classic" books that I want to read. It's a coming of age story set in the English countryside (where else?!!) and is written in the manner of a diary (except without dates). The book was surprisingly on the cleaner side though the movie trailers I see have taken liberties and I'm thinking I need to just stick with the book! The ending was not what I expected but on further thought decided it was a good ending.

And that's it for now! Time for me to log off and get to work on what needs to be read this week!

For more ideas on crafting and reading, visit Ginny's Yarn Along.

what a lot of books read! enjoyed reading about them... you make lovely things! I love that tea cozy with the red tea pot, so darling!

Interesting that we do go through seasons with our crafting. I tend to think I didn't do much when my children were young, but truthfully...it just looked different than it does today.

The animals you've sewn are all adorable! Each one seemed to be my favorite as I scrolled down the page. :^)

I've never troubled to say this before, but I am really, really grateful for the info you post about books you read. I've just reserved two from my local library and might buy a third. Again, many thanks :-)

I Capture the Castle is one of my favourite books, I'm glad you enjoyed it! That tea cosy is beautiful, yay you :)

I have that Goudge book on my "to read" list. I read I Capture the Castle years ago and it was good. Quirky but good. Stephanie has talked about a different phase in their home now that her youngest is five and her oldest a teenager. Even their annual vacation at the beach was easier this summer with the kids at this age. It is less physically demanding than when there were lots of preschoolers!

I, too, am very grateful for your book reviews, and have enjoyed reading some of them. What you say about your crafting following the changes in your family, and your responsibilities, is very interesting! You are very talented indeed. I suppose even if (can you imagine?) you weren't the homeschooling mother of a large family, you might have kept changing what you enjoyed making... But the restraints of fitting crafts into family life present specific challenges.

I somehow missed this post....wow, I just LOVE those little stuffed animals you did! The cat is my favorite..but, the others are close behind!!! SO adorable! Great job!