Last week I made the trip north to Rome City, Indiana to visit the home of Gene Stratton Porter (1863-1924), a famous Indiana writer from the last century whose life work of nature study, writing, conservation, and business ownership has inspired me for some time. 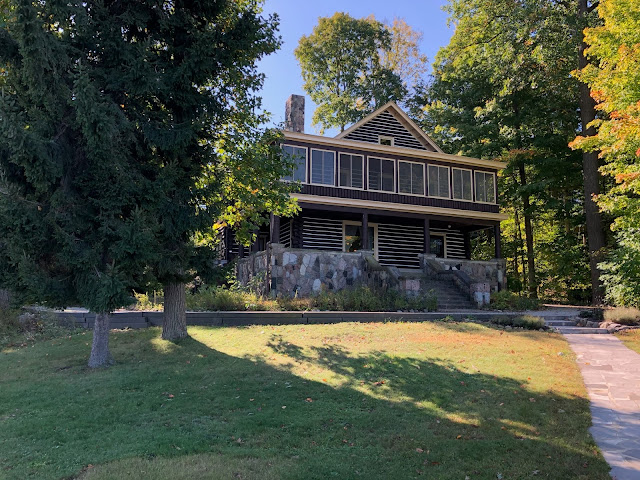 I wanted to move right in to Gene's "Cabin at Wildflower Woods". Set on the banks of Sylvan Lake, Gene designed this house to provide spaces for hospitality, her own writing and photography work, and relaxation.

Look at that beautiful cherry woodwork! It was harvested from trees right on the property! I also loved the blue and white china in use on the table and filling a corner cupboard. 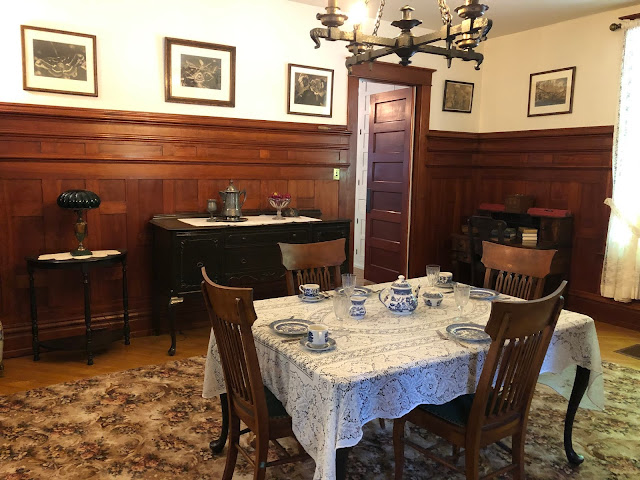 Like Jane Austen and the Bronte sisters, Gene was born into a minister's family, the twelfth child in the family! She was steeped in nature from her birth, being constantly taught to see beauty around her.

Here is a large fireplace in the front room at the Cabin where Gene used stones collected from all 48 states and given by friends to form the fireplace decoration. She had the stones inserted to include pictures (see a Revolutionary soldier on the right side of the fireplace). 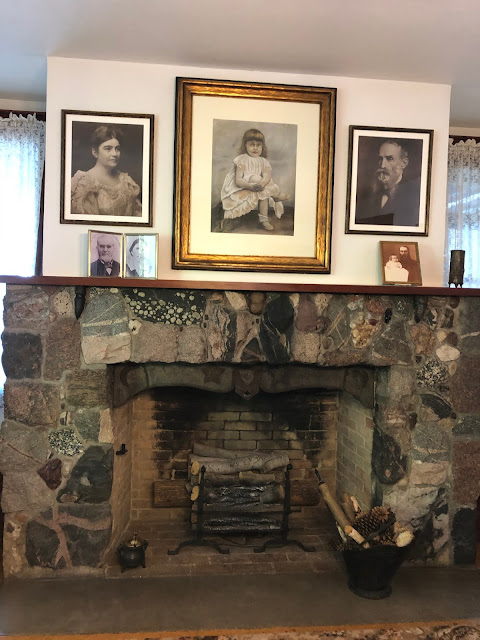 Gene began her writing as an outlet for her love of nature and desire to be creative. She also wanted to earn her own money. She wrote for women's magazines and then began to publish nature books and novels. Get this, at the height of Gene's career her books were more popular than the Harry Potter books are now (taking into account population growth, etc.)! That's serious numbers!

The fireplace in the writing room is made from Pudding Stone, a type of stone found only in a very small area of the country, including parts of Indiana. 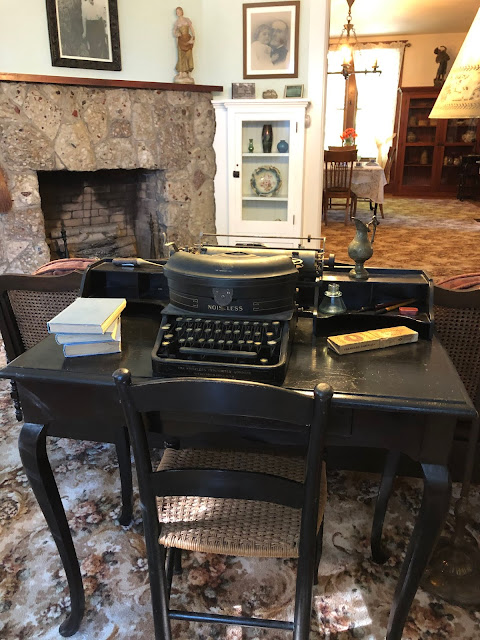 Birds were at the heart of Gene's love for nature. As a child she roamed her family's fields caring for every nest and bird she came across. She was, in fact, a "bird whisperer." She created this beautiful, light-filled porch room for growing plants and included a low table with a faucet for growing seedlings. 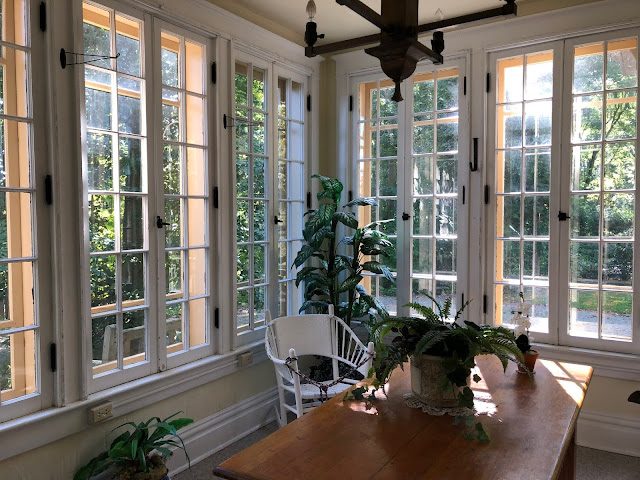 Photography was cutting edge technology during Gene's time and she built herself a proper darkroom in this house so she wouldn't have to operate in a darkened bathroom. Many of her nature writings were illustrated with her own photographs. 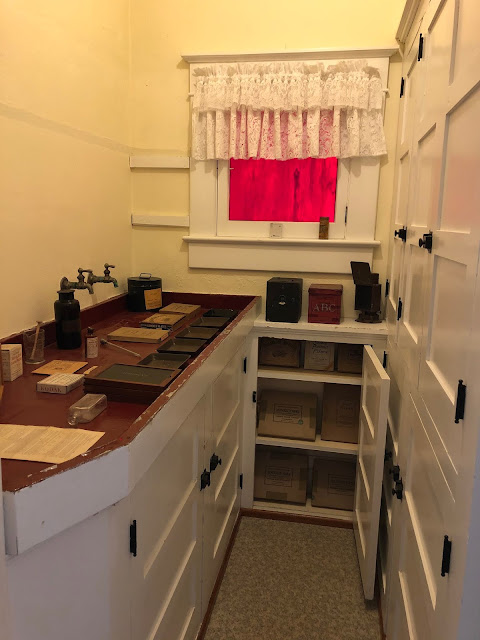 I loved the kitchen: the floors, the tall ceilings and large windows, the blue on the walls, the cupboard for the state of the art icebox, the well-designed island with its spice rack, and an entire wall of cupboards. Gene hired cooks and housekeepers to help her, so she didn't really use the kitchen herself, but I sure wouldn't mind having this kitchen! 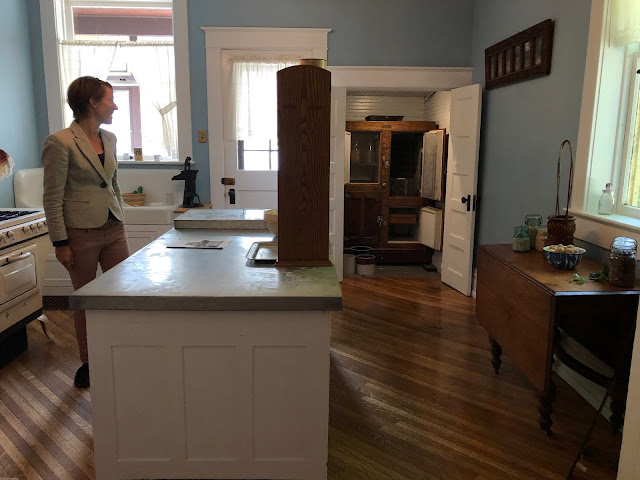 The Cabin at Wildflower Woods sits on the bank of Sylvan Lake and it makes for such a tranquil place to be. 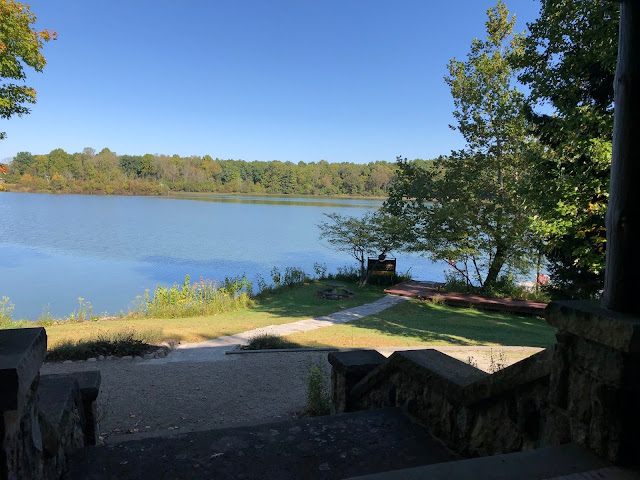 We couldn't see upstairs in the house, but there are seven bedrooms as well as that huge sleeping porch! I just wanted to move right in!

Gene loved this place but found that as she grew in popularity the area became overrun with fans coming to visit/disturb her. 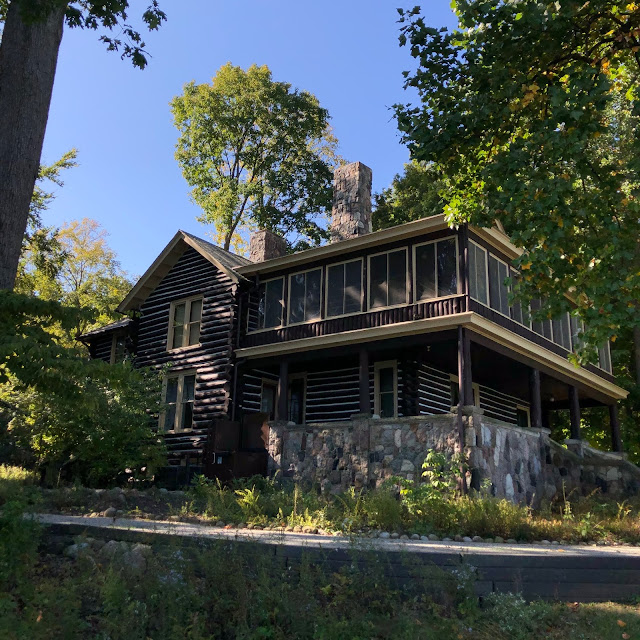 On the day I visited there were no hordes of tourists or meddlesome media. All was quiet with a gentle wind and the soft light of autumn sifting through the trees. 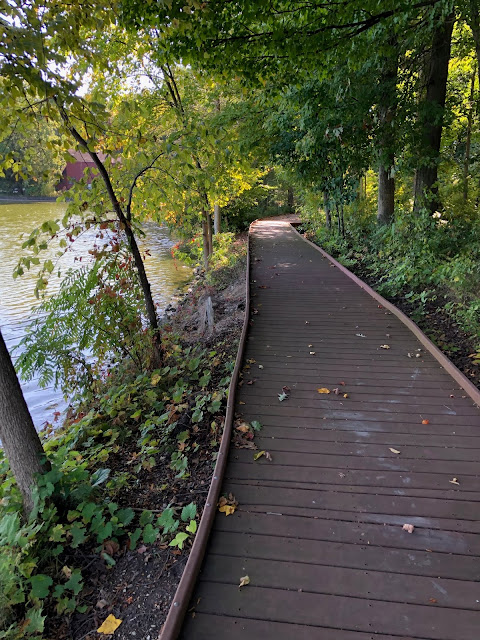 Behind the house were the gardens -- 35 "tidy" beds and then many "untidy" areas beyond that. Gene was devoted to plants and hired gardeners to make sure she could keep all these areas maintained. 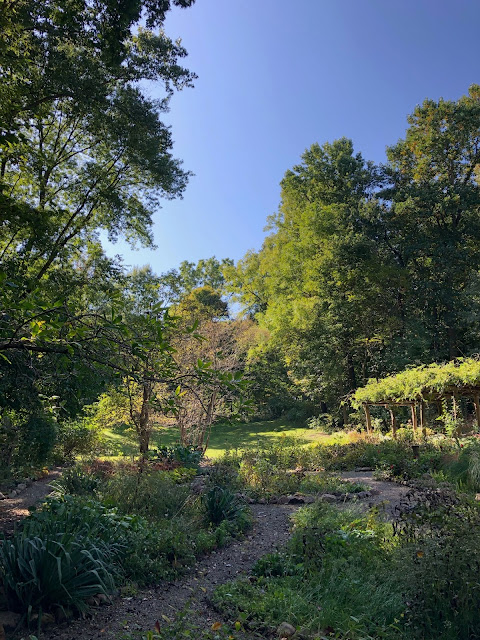 Perhaps some of you are familiar with Gene's most famous novels: Girl of the Limberlost, or Laddie, or Freckles. Gene wrote 12 novels and 8 nature study books. When she felt her life at the Cabin becoming too overrun with people she moved out to California where she became a film producer and saw many of her books turned into movies! 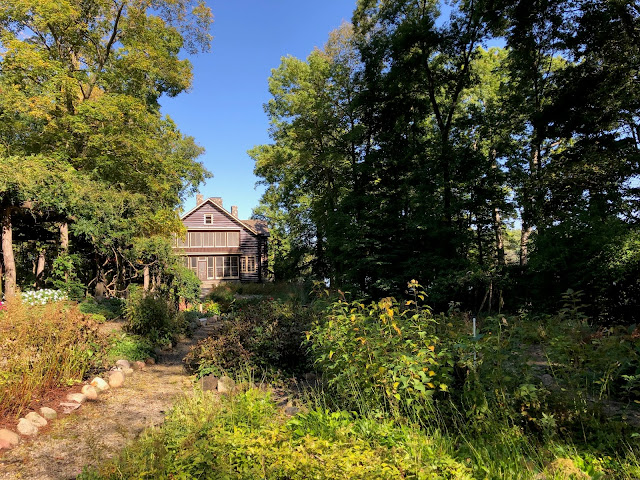 After touring the house, a friend and I wandered the little trails meandering through the small amount of acreage left from Gene's original property. 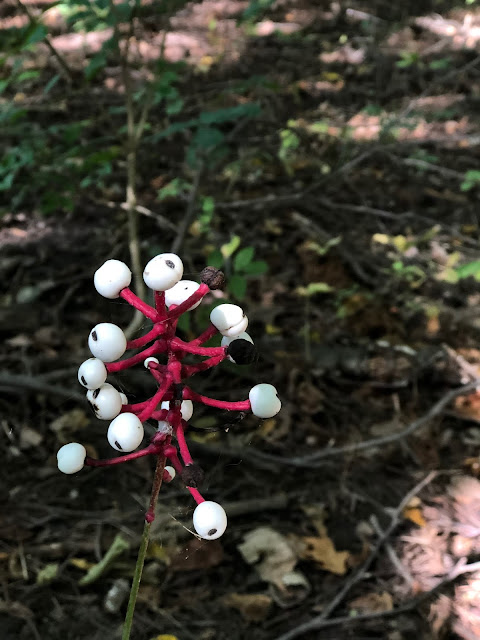 This part of the property is being returned to prairie land, similar to the state park at Prophetstown. 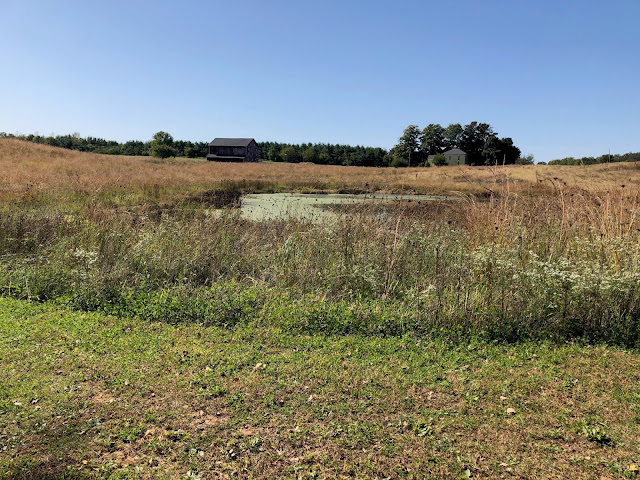 Gene was killed in a traffic accident in California in 1924 but was eventually buried back here in Indiana at the Cabin of Wildflower Woods, as she had stipulated. 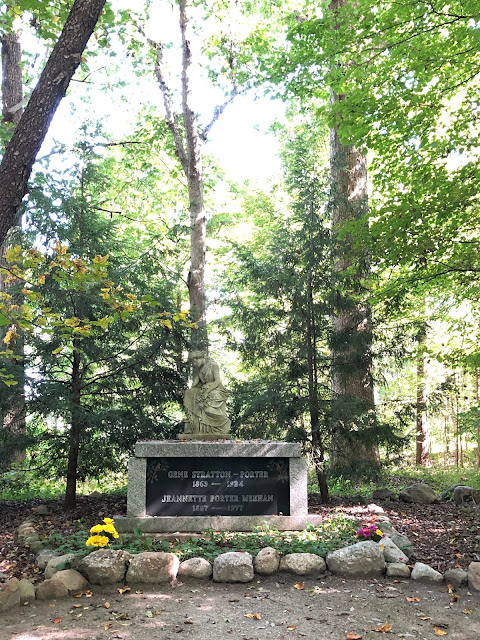 Gene was a woman who celebrated the wonder of nature and did her best to share that with others. She was a woman ahead of her time with her conservation work and efforts to save the Limberlost Swamp from being eradicated. If you haven't ever read a book by Porter, I highly recommend you try one! I've just picked up The Song of the Cardinal myself.

Thankyou for this look into Miss Porter's life. As a young teen, I was given the book "Freckles" as a gift. I loved it, although I had no idea that the Limberlost was a real place. Many, many years later, I read it to my 2 boys as part of our homeschool curriculum and they loved it just as much as I. I really should look for some of her other titles.

Wow ! I just was talking to my husband about driving down there as part of our " fall color tour". I first read Freckles in my late teens and then have devoured many since then as I have found them at used book sales..Thank you for taking the time to post this !

oh neat!!!! that's really a beautiful home and such a neat picture into the life of this much loved author!

Thank you for this wonderful peek into Gene Stratton Porter's home. It's all been so thoughtfully constructed - from the cherry wood panelling to the stone fireplaces, the fantastic kitchen (swoon) and the photography lab, to my my favourite, that light filled porch room. And I'd love to go for a wander along that board-walk by the lake...

I'm an Australian who read (and adored) "Girl of the Limberlost" several years ago, and I feel like this gives me a much better sense of the setting of it.

Gorgeous, Heather! I loved seeing the house and grounds! Thank you!

My husband's college roommate lives close to this so we have driven near it but never visited. Now I'm wanting to see the rest of it! I love her books, especially Limberlost.

I don't know if Amazon still has them but most of her books were available free for the Kindle many years ago. I don't think they offer them free these days (and granted the way they were set up has been improved) but it made the hard to find books available for reading.

I have read that long ago the northern part of Indiana had so many wetlands that one could canoe across the state!