I've discovered a new favorite drink at Starbucks -- "Peach Tranquility" tea! And, a trick I learned from a friend -- I order the grande and ask for them to make it with only one teabag and that gives me one to take home! 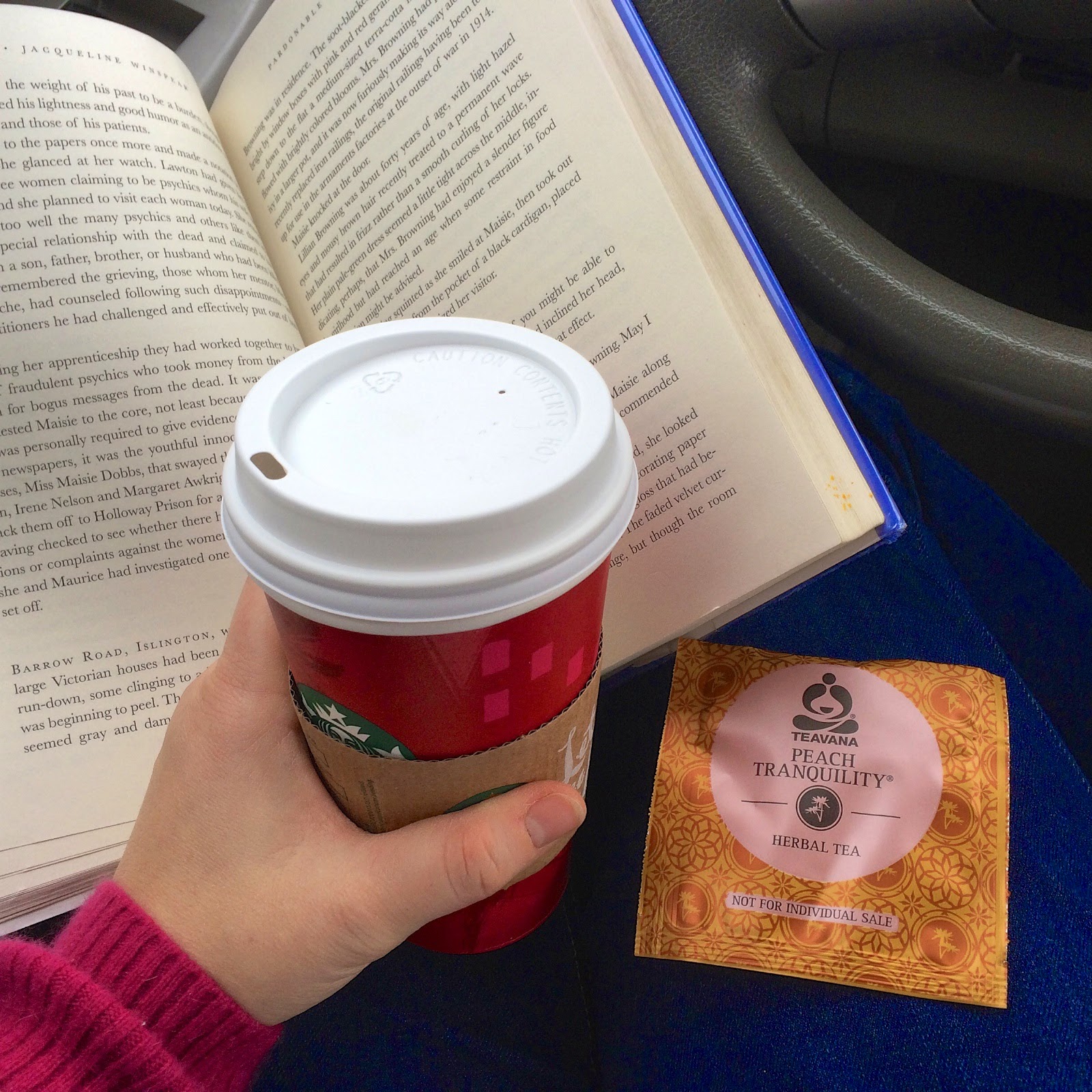 I tried a batch of this Chai Tea substituting rooibos for the black tea. It's good, but I think I want to add more cinnamon and cloves. I wasn't exact in my measurements and just kind of dumped things in!! :) Thanks to Elizabeth for pointing me to the recipe! 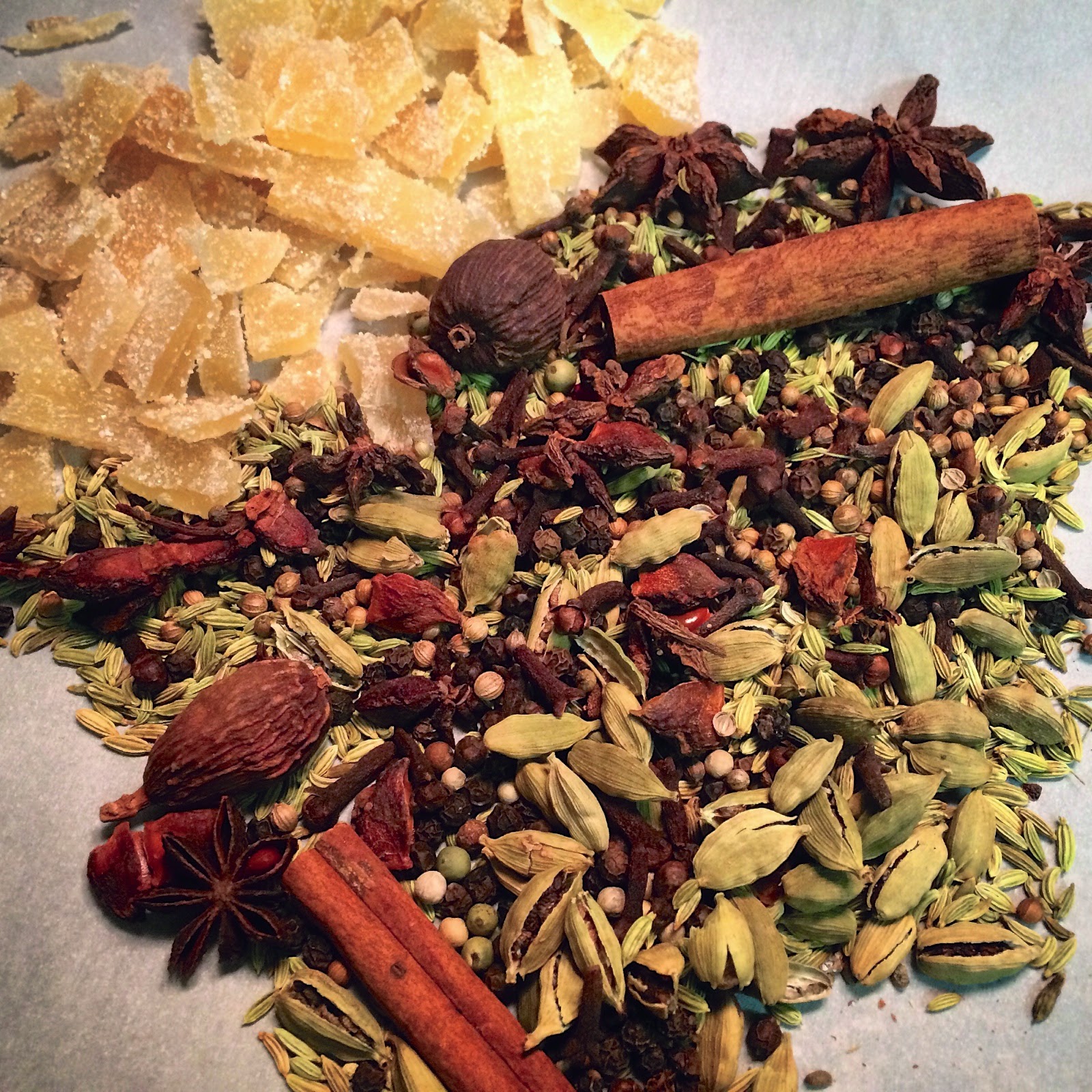 Sharing a bit of my Teavana tea with a friend. I'm getting to the bottom of my Fall Break stash! 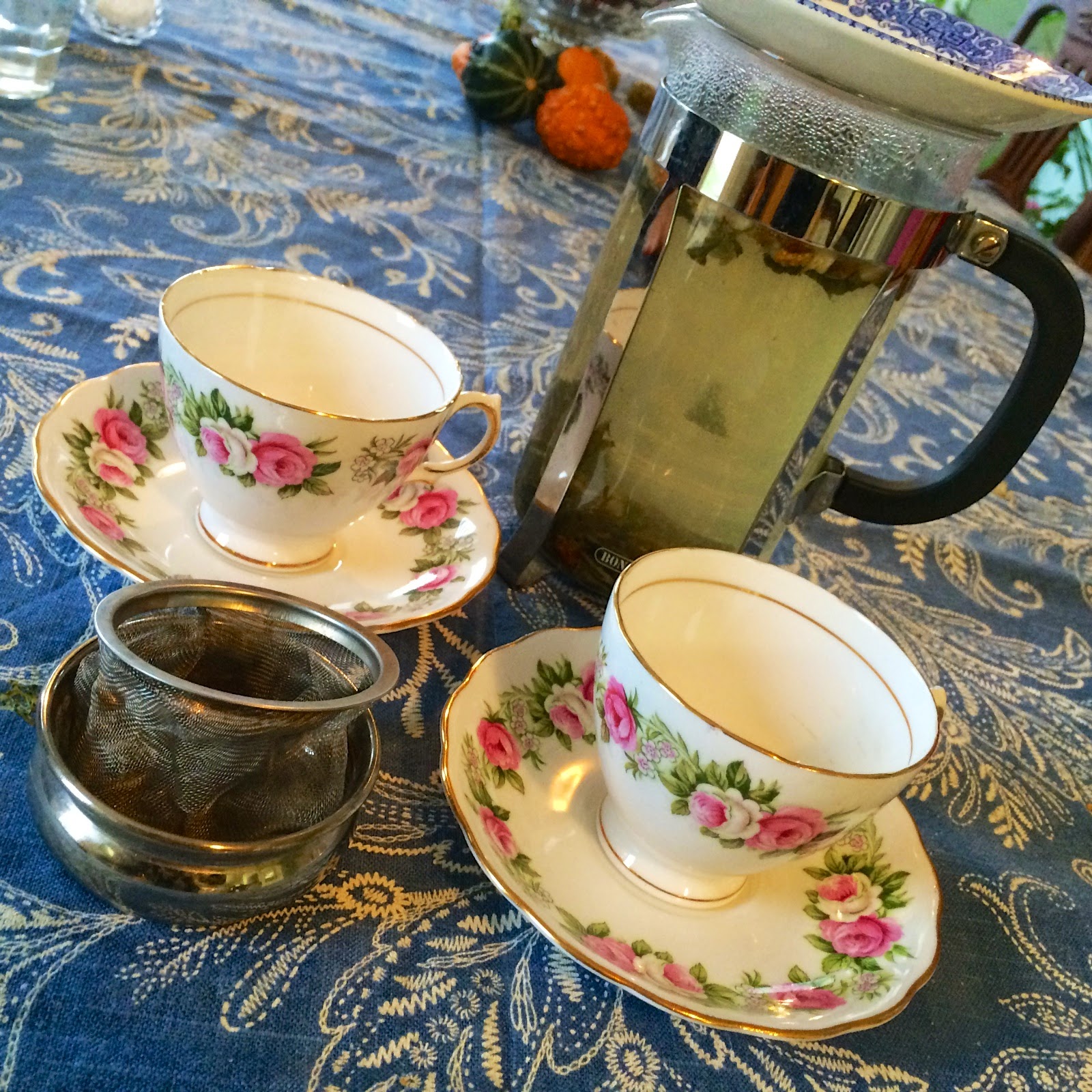 Another friend had a birthday and to celebrate I made a gluten free chocolate cake (King Arthur's mix) and filled it with cherry preserves, Nutella, and topped it with chocolate whipped cream! 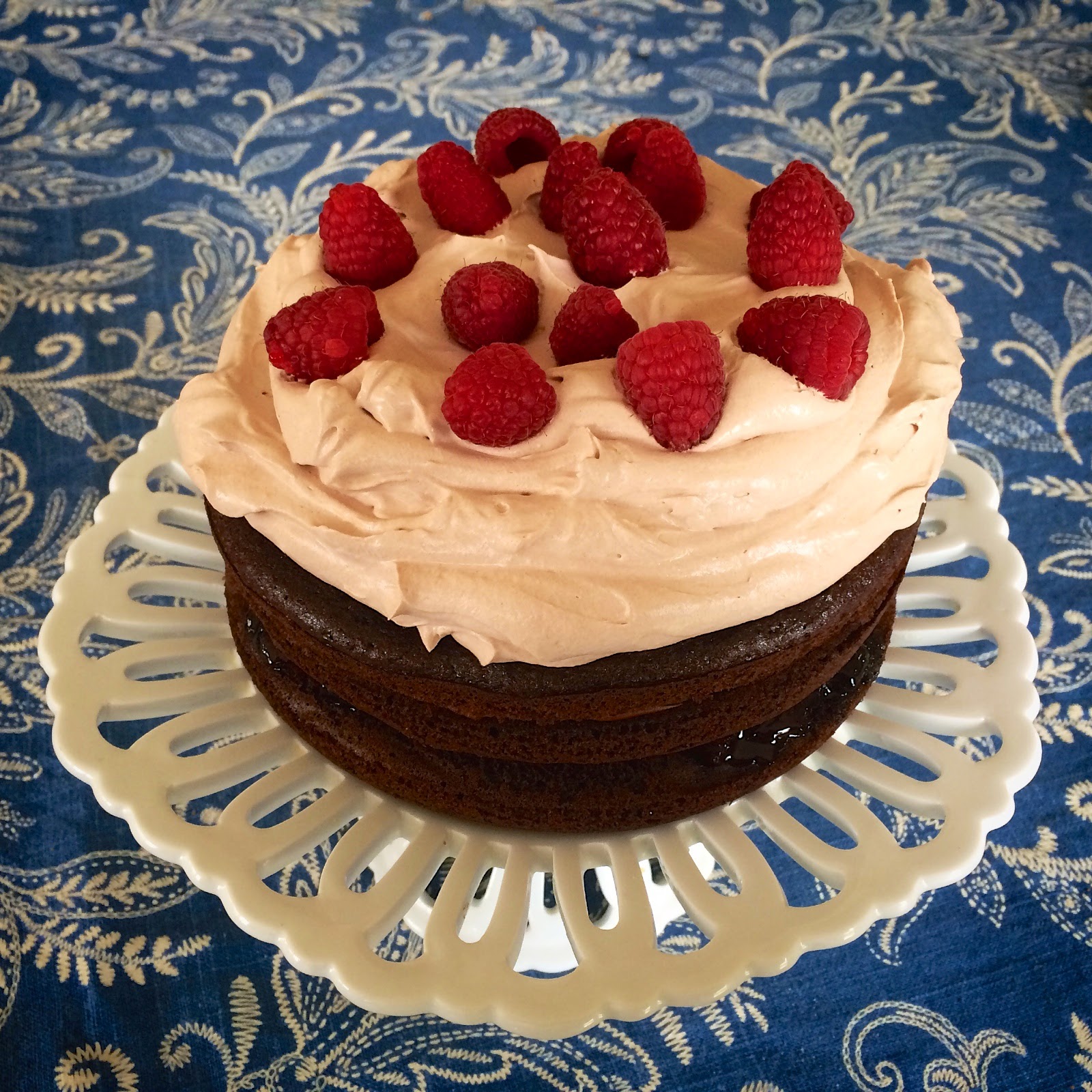 Last week I met up with my dear friends from Lithuania! But, instead of Lithuanian food we had Lebanese! It was SO good! One friend is married to a man from Lebanon so their family gets to enjoy many cultures! 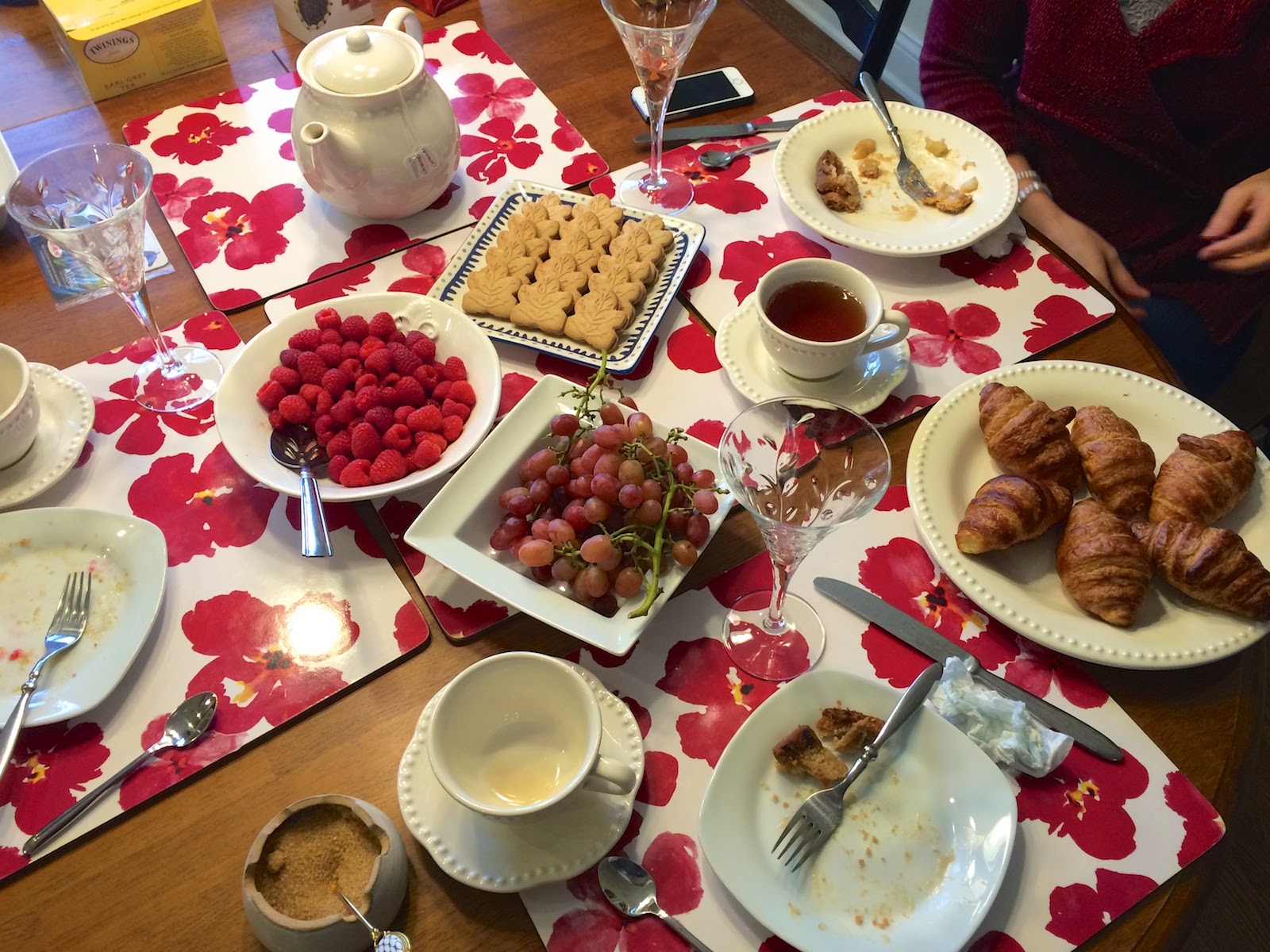 I use this glass tea holder everyday mostly all day. It is so handy for keeping tea warm on these cold days. I'm so afraid I will break it one day. :( 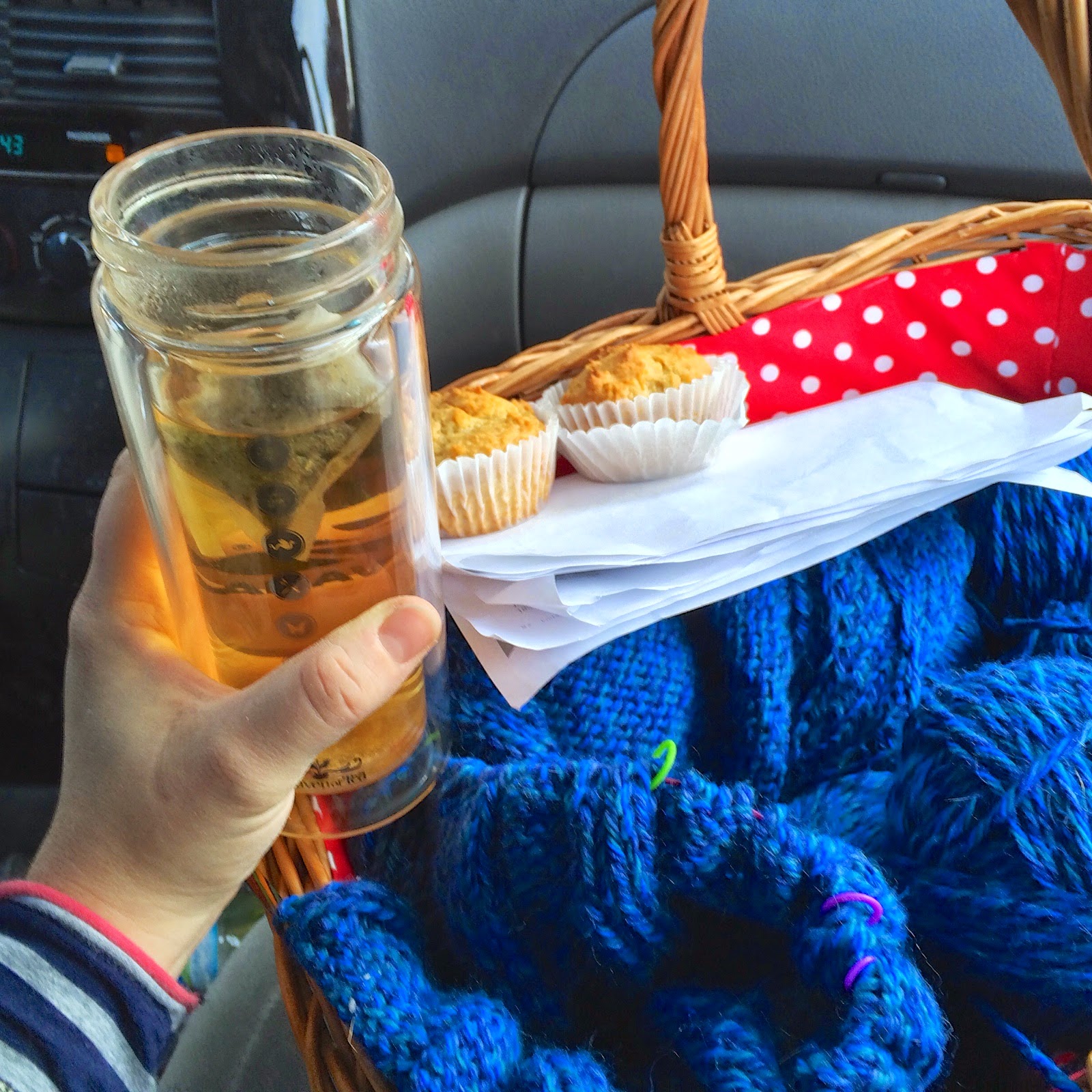 Sunday I tried making a gluten free persimmon cake. The persimmon was not as strong as I wanted it to be. But it was nice with cranberries on top (and cream for the others). 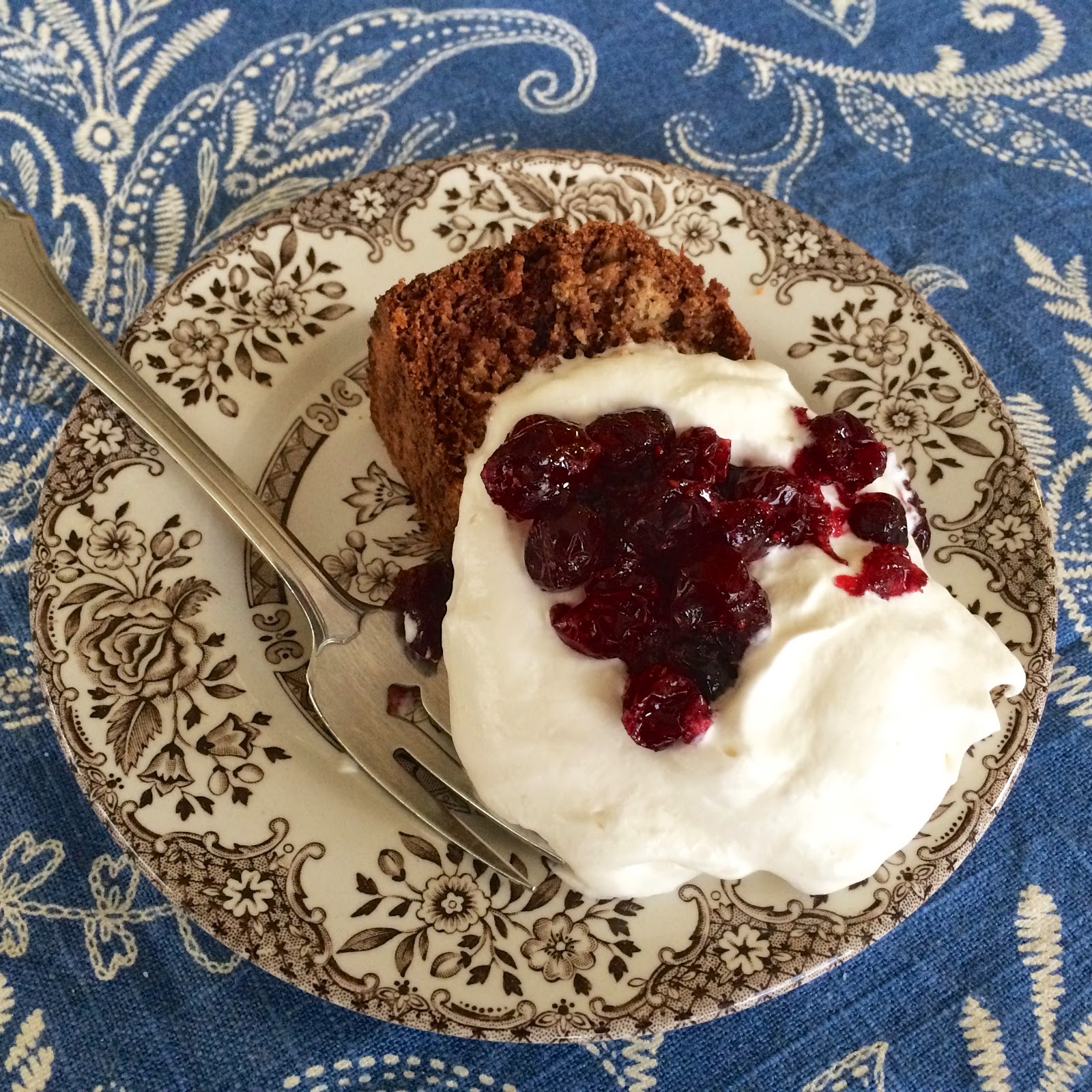 Can you believe we have had our first significant snowfall?! This is crazy! But it is beautiful! 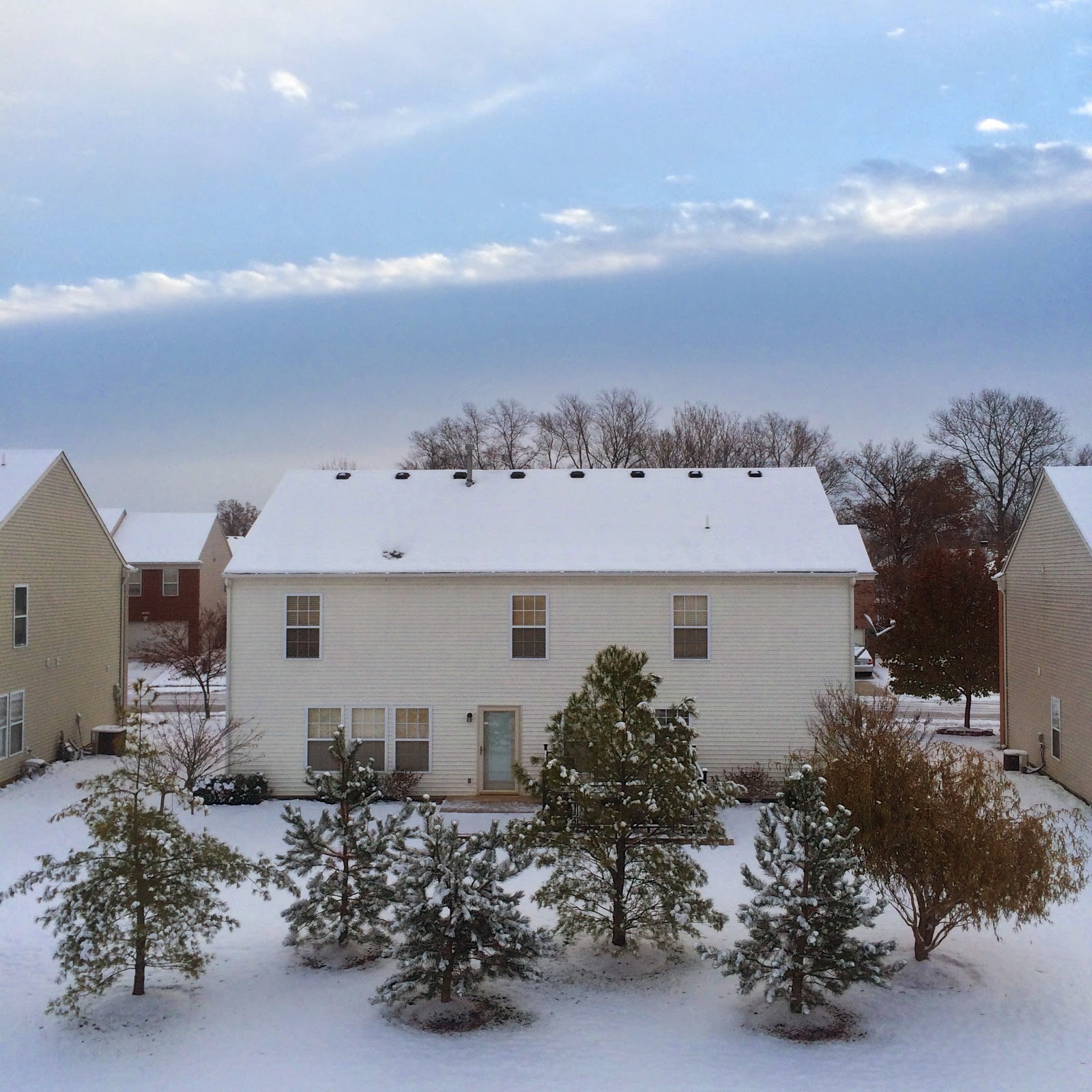 And it calls for fires in fireplaces! When I arrived for our neighbor tea this was welcoming us in the fireplace! 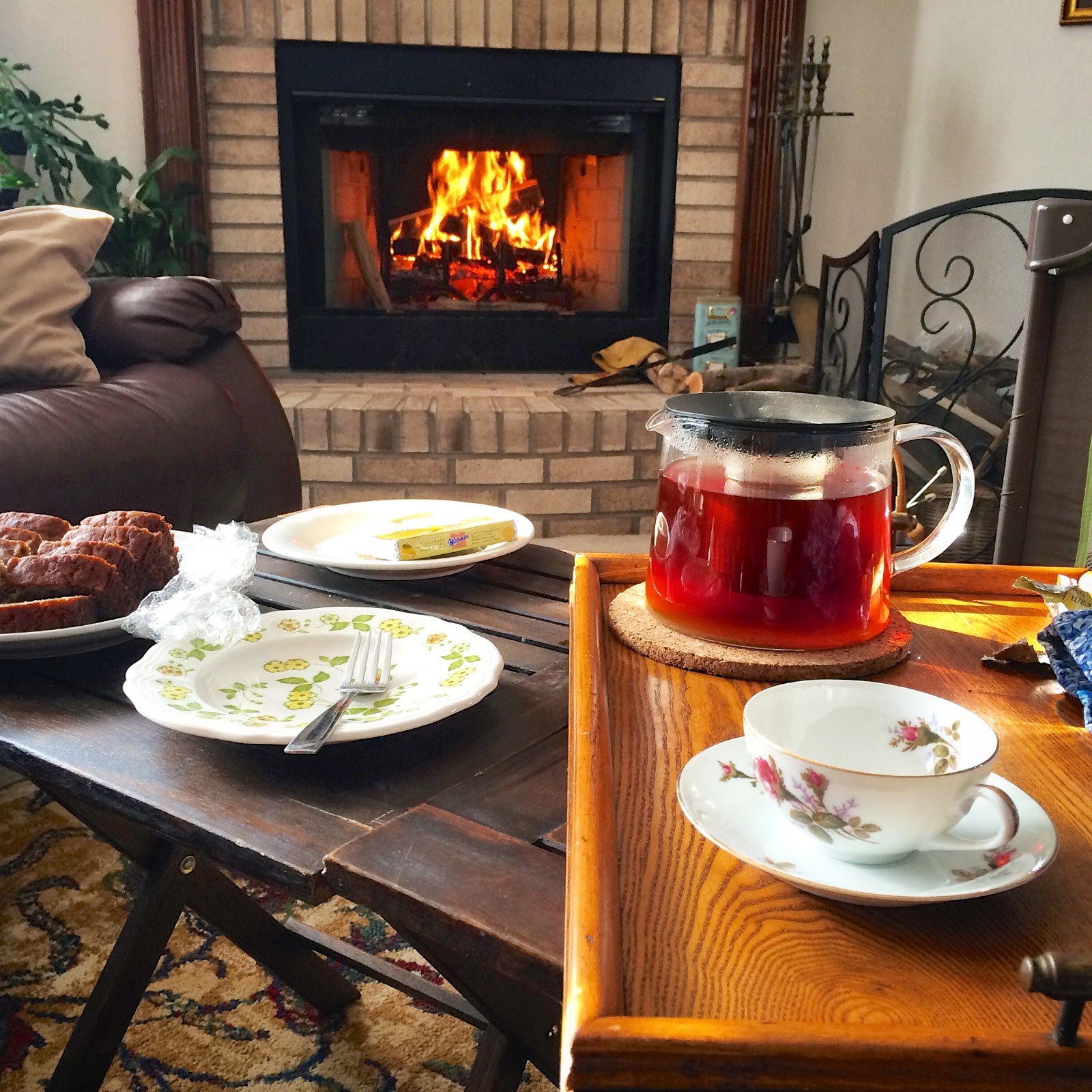 And this welcomed me at my sister's home when I arrived for a quick shawl pattern photoshoot! 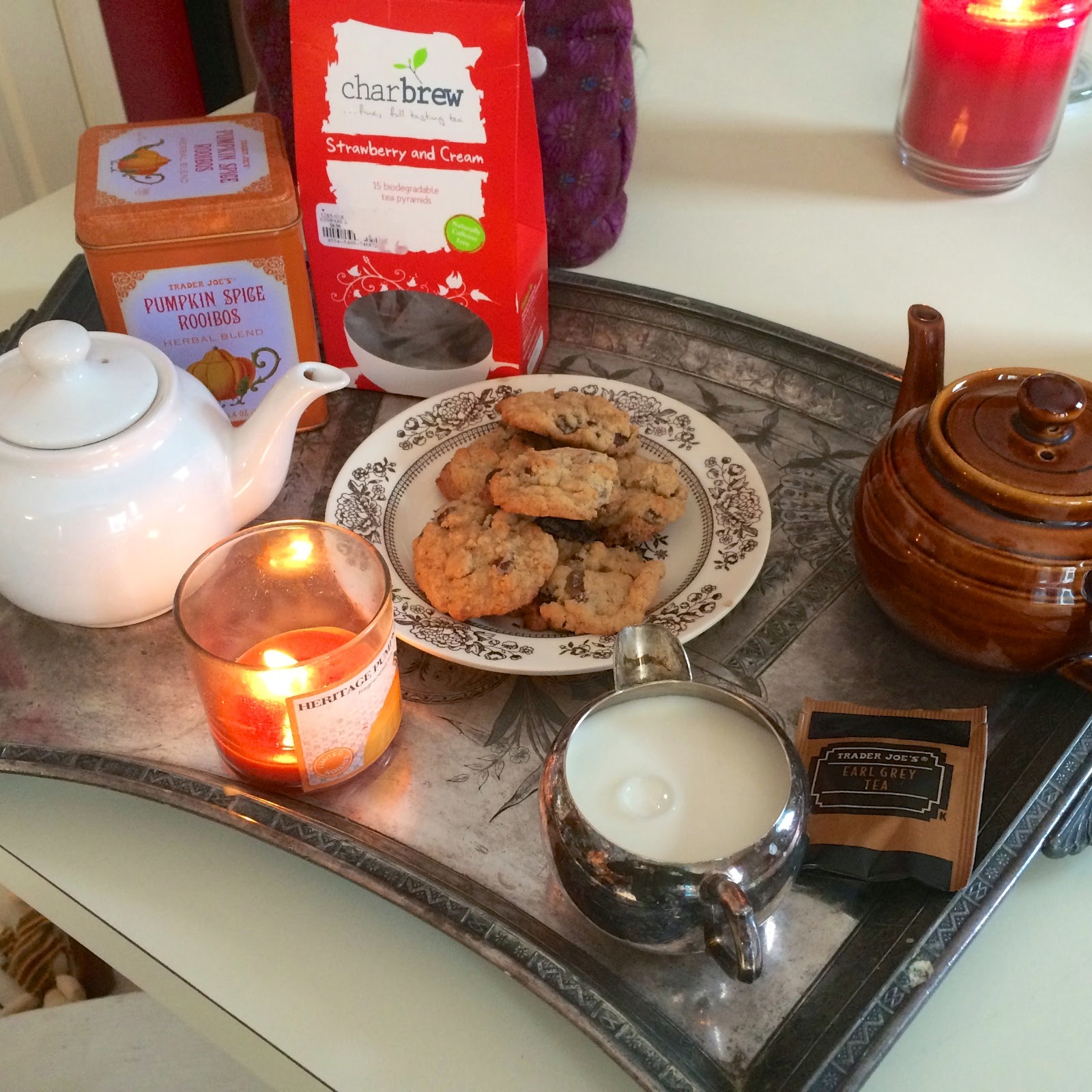 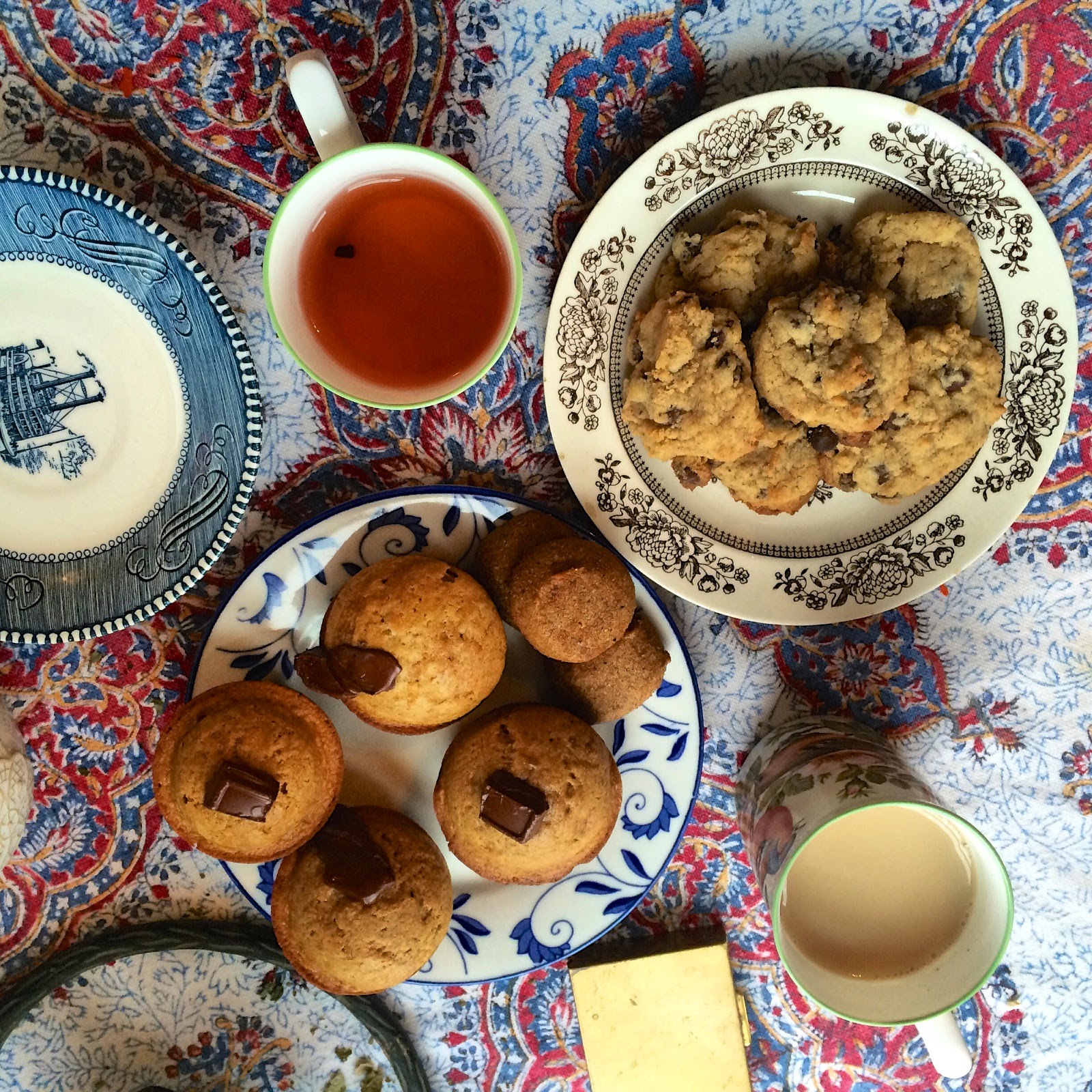 I discovered a new tea while food shopping yesterday -- Celestial Seasonings Cranberry Vanilla Wonderland. It's really good! I'm not a huge fan of the added Stevia as it tastes different than sugar but I think it is good enough to tolerate that. 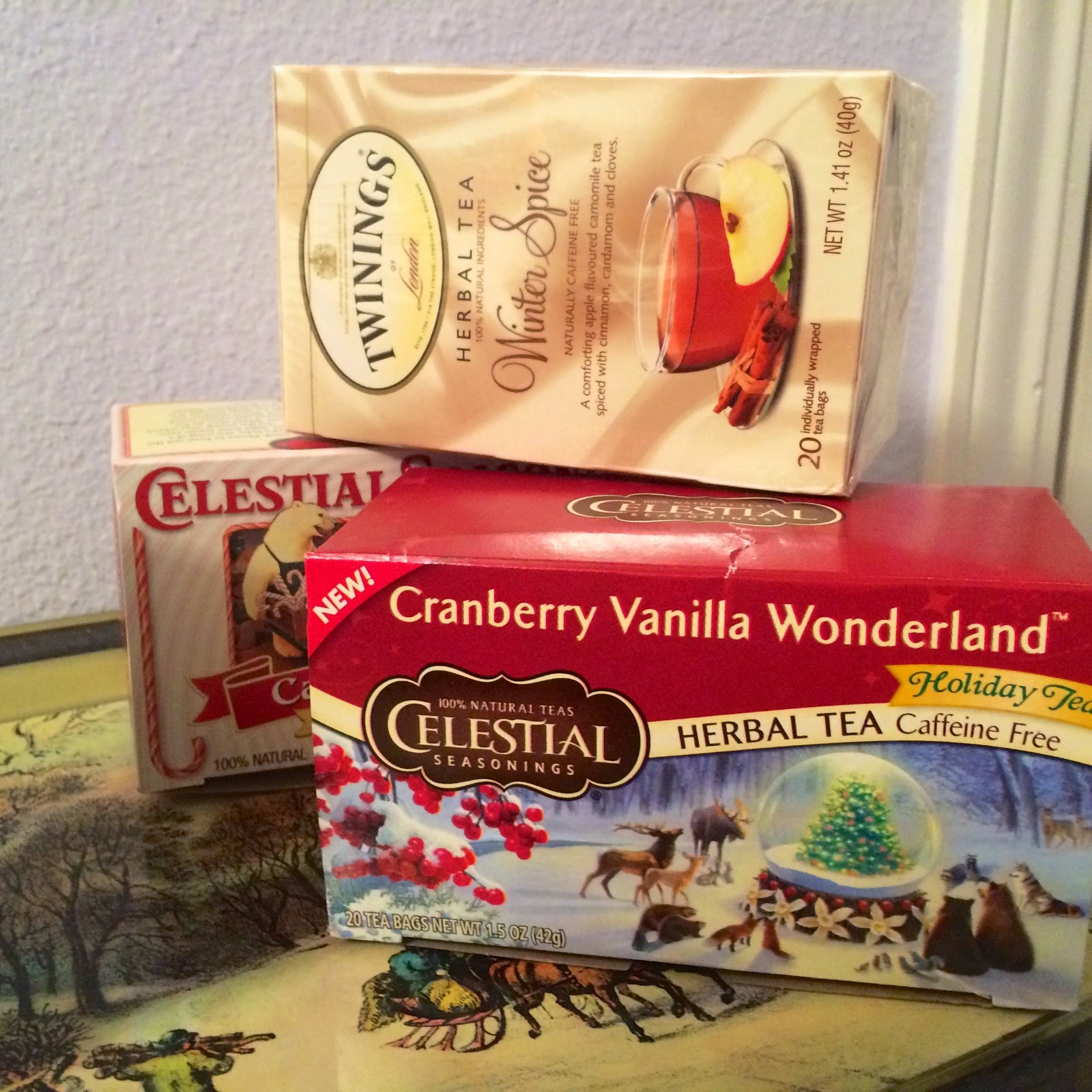 Other than sipping tea, and my other responsibilities, I have been planning for our family Thanksgiving with Michael's side of the family! Everyone is converging here for a whole weekend and we can't wait to see them!!!! I've been hard at work on the menu and thought I'd share my ideas here......

And now I better run and get some more cooking under way!
Posted by Heather LeFebvre at 4:40 PM

ooohhhh... yay for the tea, glad you used the recipe!! we should exchange tea making experiences via our blogs I think :))))

Fun teas, fun dishes, and your neighbour I see has the tea pot I use the most! go IKEA! :)

Keep warm, well and have a wonderful thanksgiving!!! I loved seeing your menu!!!

ps: for your future enjoyment, this yam + cranberry dish is SO GOOD (and I am sure you can sub a good margarine for the butter)! http://eroosje.blogspot.com/2014/02/gf-yams-with-cranberries-wonderful-part.html

I always love your tea posts! Your tea times look so lovely! It looks like you are going to have a lovely Thanksgiving! We are having folks over for desserts and drinks Thanksgiving evening. I'm looking forward to that. :-)
I will have to look for that cs tea. Enjoy your baking !

I also love your tea posts!

I saw that new Celestial Seasoning tea today at Meijers and wondered how it tasted. I may have to get a box the next time I am there.

I can't believe the snowfall already. The cold doesn't bother me all that much but once it starts snowing, our gravel lane gets very slick. Just not ready for that!

Decided for my next reading (before the next review book arrives), I'm going to re-read The Scent of Water by Goudge. A favorite. I think you would find the book I just reviewed about Hannah More to be very interesting.

See, here we are all about tea and I still have to talk books. ;)

Whisk in the half-and-half mixture and heat, stirring constantly, until it thickens suddenly. Turn heat to low and continue to stir and cook for one minute. Remove from heat and whisk in:

Chill for several hours in crust, and before serving, top with sweetened whipped cream:

1 C. heavy cream
2 T. sugar
Whip until peaks are stiff. I used to stop with the more elegant soft peaks, but in my tackier old age, I find that I like the tidiness of whipped cream that stays in place.

I just always think about how I would love to have tea with you. I had to stop drinking coffee a few months ago due to acid reflux and am trying to find a tea that truly satisfies. Lately, I have been drinking hot water with a squirt of fresh lemon and am amazed how much I like it.

Your Thanksgiving menu looks just so wonderful. I hope you and your family have a wonderful time together.

Wow!!! A whole lotta delicious going on at your place! :D I love your photo that is a shot from above over the the tea & treats. :) Your thanksgiving menu sounds yummy!!!

What a great post! YOU are amazing, Miss Heather! I like your dinner menu. I am tempted to go to Trader Joe's. I think the gravy lovers would give me a hard time if I bought it. Hmmmmmm.
Aw, tea! I had some tasty green tea from Taiwan this morning. I put in quite a bit of honey (yay for bees) and it was very smooth.
I love your tea parties, your tea trolley, and your great ideas! xo
Yes! I loved The Gentle Art of Domesticity. I have it and I might look at it today!

YUM! I owe you an email or two! A good butter alternative is Earth Balance Butter, if you can find it. It is becoming more widely available. I really like it, although a tad salty. It is an oil blend so it doesn't brown the same way butter does but it certainly does the trick in baked goods.