Sunday Lunch at my mom's: 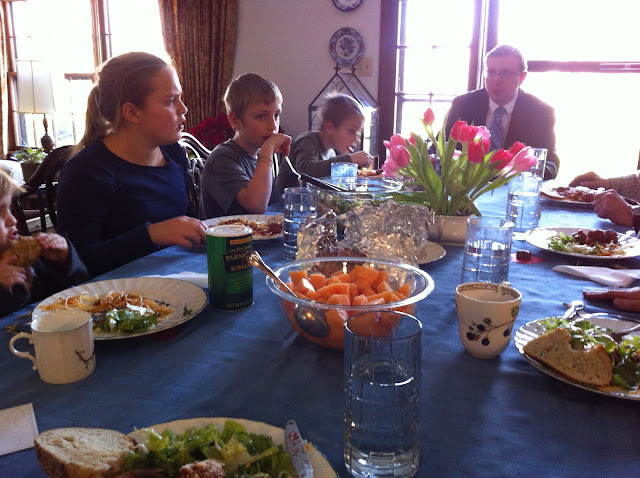 My very own space: 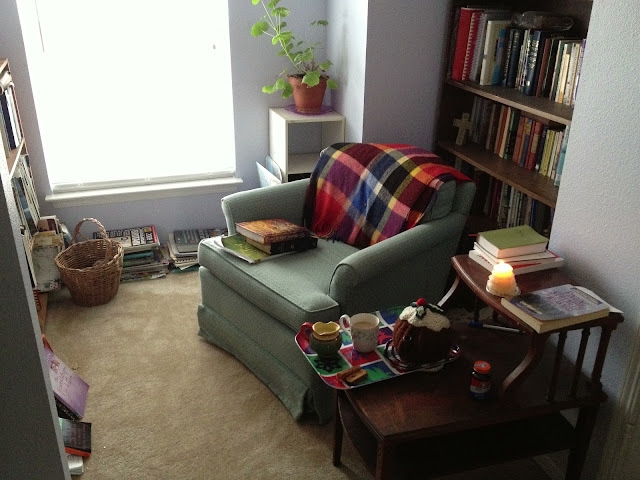 An adorable little imp for company: 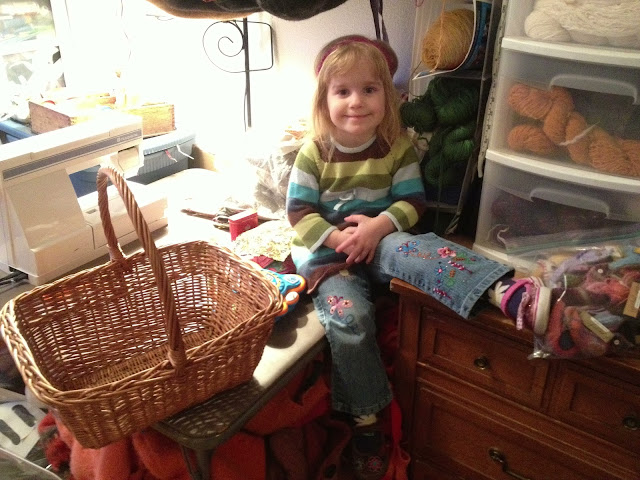 Email ThisBlogThis!Share to TwitterShare to FacebookShare to Pinterest
Labels: gifts from God 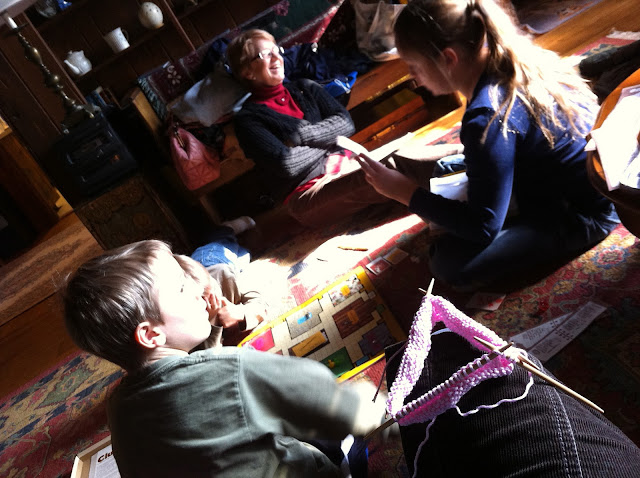 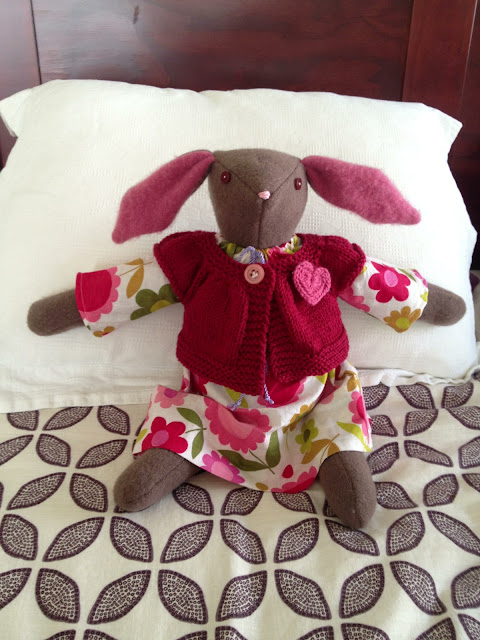 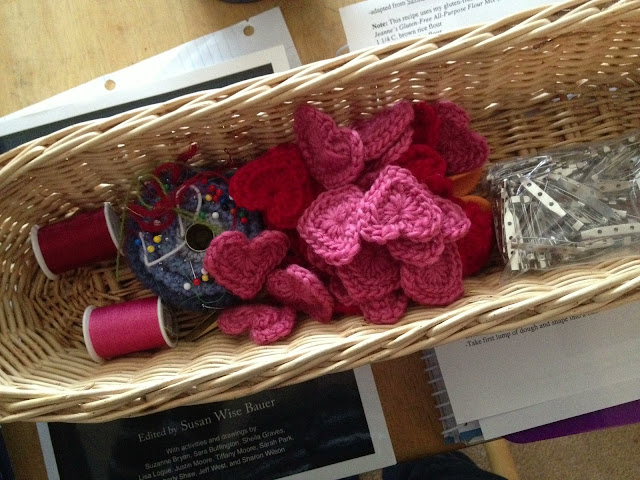 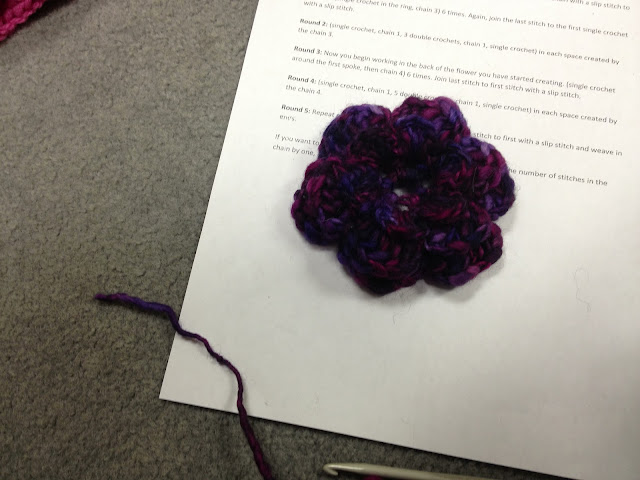 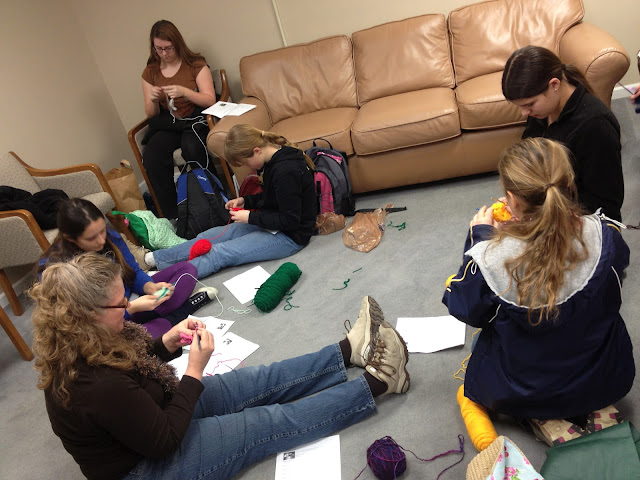 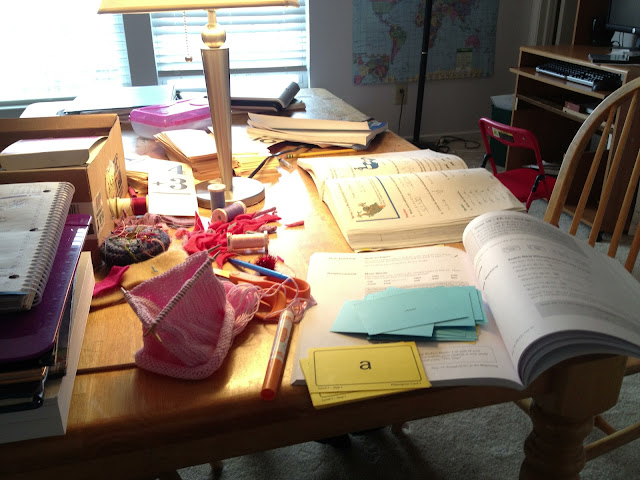 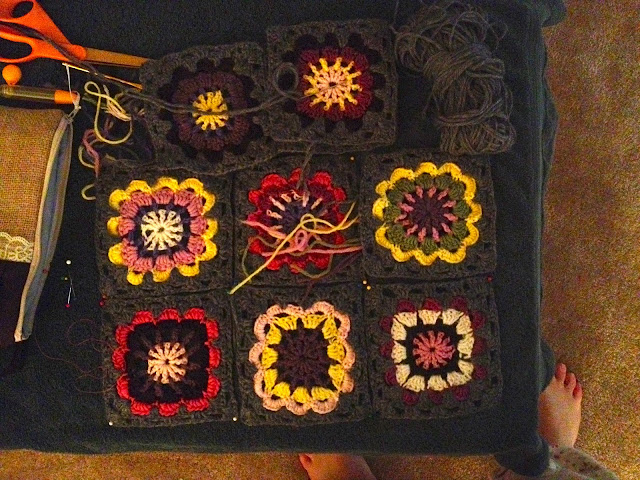 Mondays are for Grace 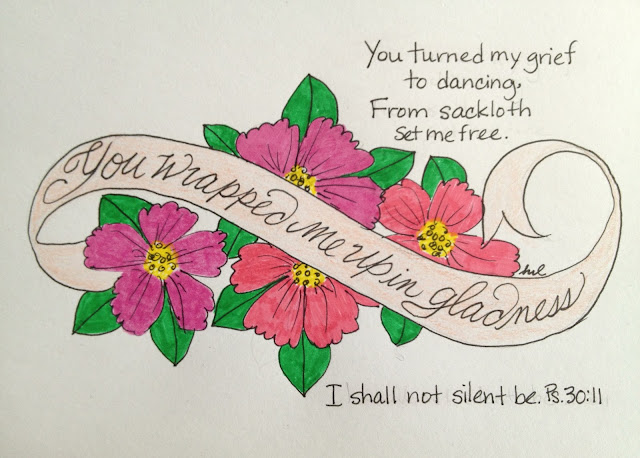 It's been a busy week for the tea trolley! We started off on Monday with a gathering of friends and the celebration of a birthday for one of our friends.

Do you see that cake? I learned a trick from my brother-in-law. A tub of Philadelphia cream cheese (strawberry flavored) whipped up with 1 1/4 cups of heavy whipping cream and 1/4 cup confectioner's sugar makes a most delightful topping to a cake. It is light, nicely flavored, and not too sweet! It also makes a wonderful topping to put on top of scones!!! 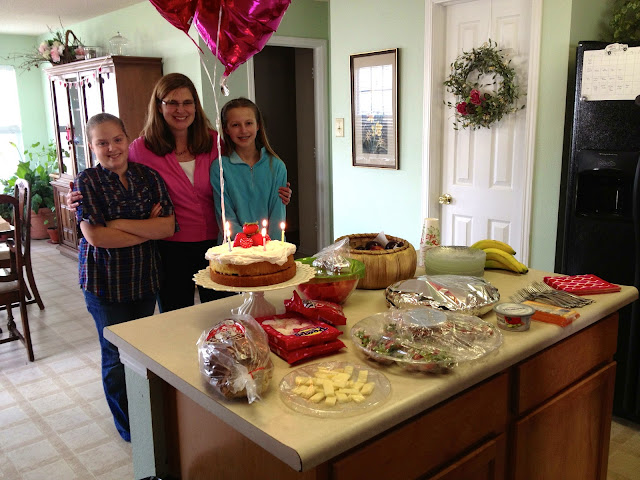 The tea trolley gives me a chance to pull out various linens and tea towels I've had hiding in the cupboard. Oh and the tea cozies do look so festive! I must make more!!! 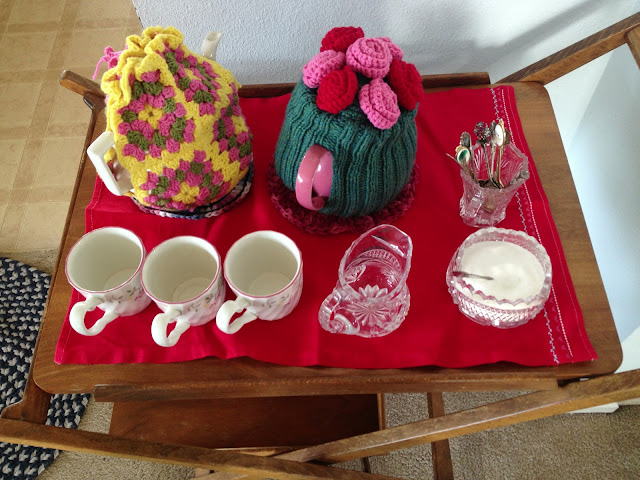 One night a friend was here for dinner and tea afterward. We sipped Alpine Berry Herbal Tea and picked out a nibble or two from the dessert tray. Of course we accompanied this by knitting and talk of tea and books. 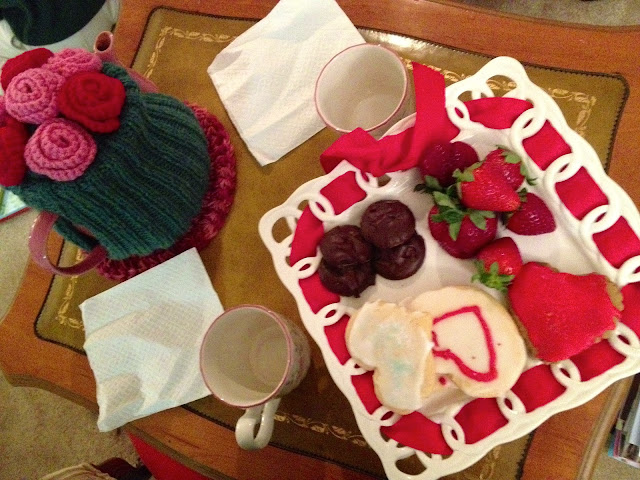 On Saturdays I try to take an hour or an hour and a half to sit down with a pot of tea and some books or magazines for some good old rest! This time in my life is very busy and thanks to the blessing of good health I am able to be very active. But, that leaves little down time and in order to get any I have to put it on my calendar and on my to-do list!!!

See those beautiful pieces of biscotti? Imagine my delight to find them mailed to me from a friend in Scotland who had just been to Venice for a birthday trip and picked them up! Being biscotti, they survived the trip in fine style and made such a delightful addition to my tea tray. 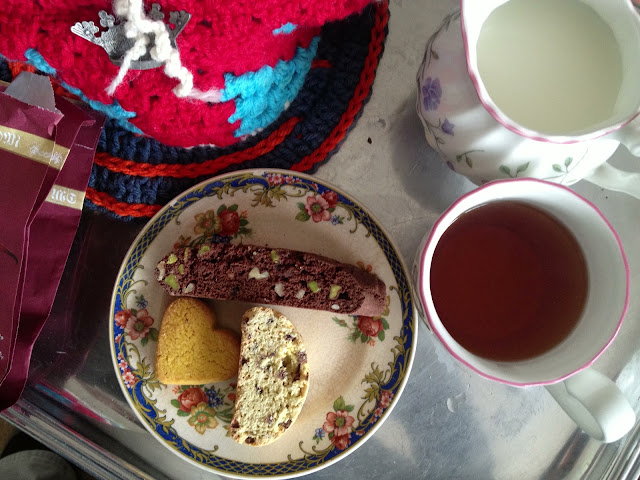 And these are the books and magazines I gathered to sit down with as I enjoyed the tea and biscotti. 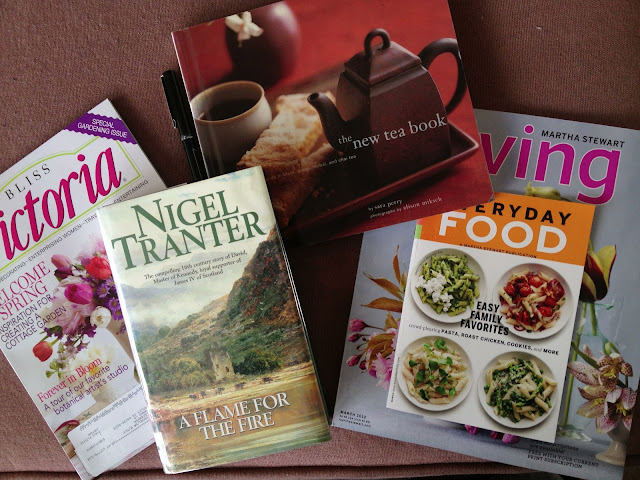 Today was yet another day to enjoy tea with friends as we had a shower here to welcome the newest addition to our congregation. I've taken pictures and am saving all the details to post about next week.

I hope you are able to enjoy a cup of something warm and lovely this weekend!
Posted by Heather L. at 5:22 PM 3 comments:

Email ThisBlogThis!Share to TwitterShare to FacebookShare to Pinterest
Labels: tea

There has been a lot more crochet around here than knitting this past week. Check out these beautiful afghans that my friend brought over to show me this week. Aren't they amazing! 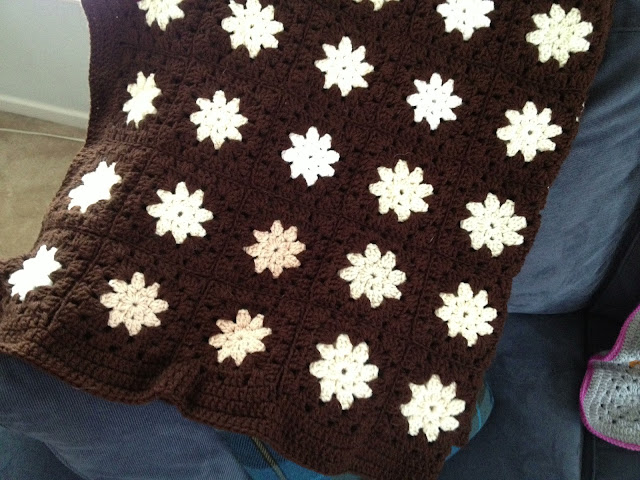 They all looked wonderful on my couch. :) 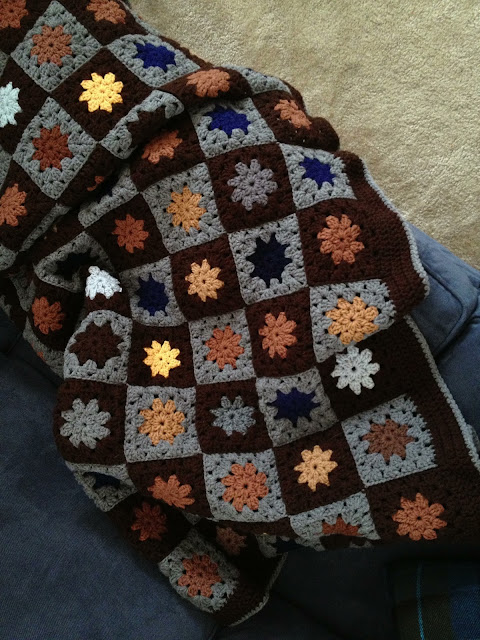 And just served to remind me that I have an afghan in-process which will look amazing on my couch as soon as I finish it!! 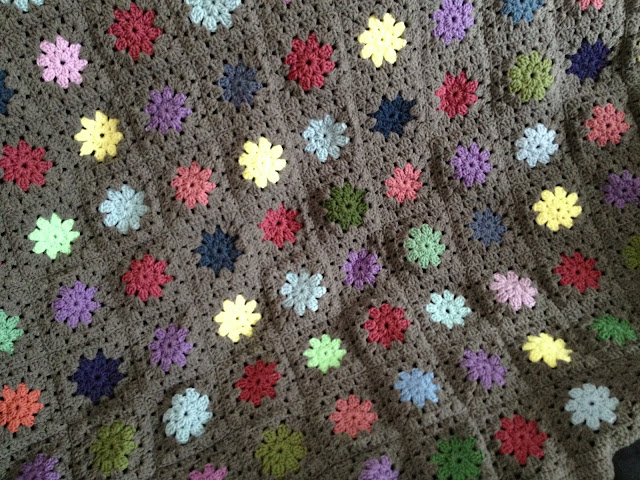 I also got the idea to take several of my extra granny squares and turn them into a couch cushion. Perhaps I will have the finished product ready to show next week. By the way, the pattern for these afghans comes from Attic24's Summer Garden Granny Square. 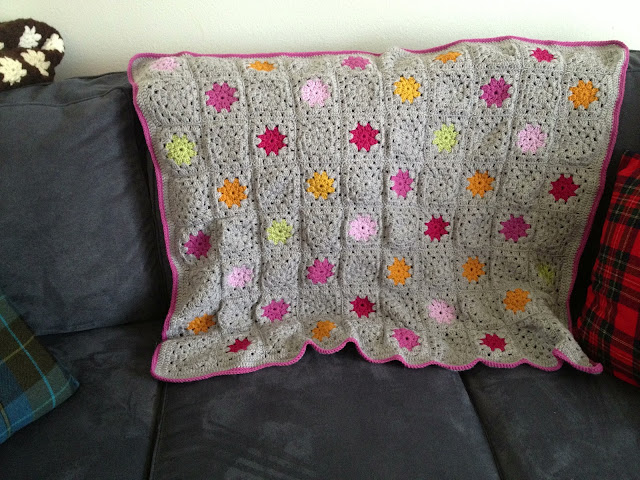 Here is a picture of the Knitting Club at Homeschool Group. We are having a wonderful spring session! The girls are lovely and I have some great helpers too! We had a little valentine party last week! 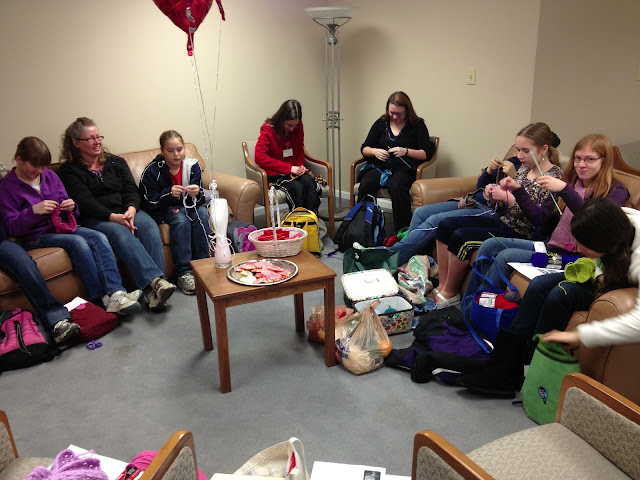 I finished a crochet hat for Laura in time for valentine's day. It is the Gracie Hat. 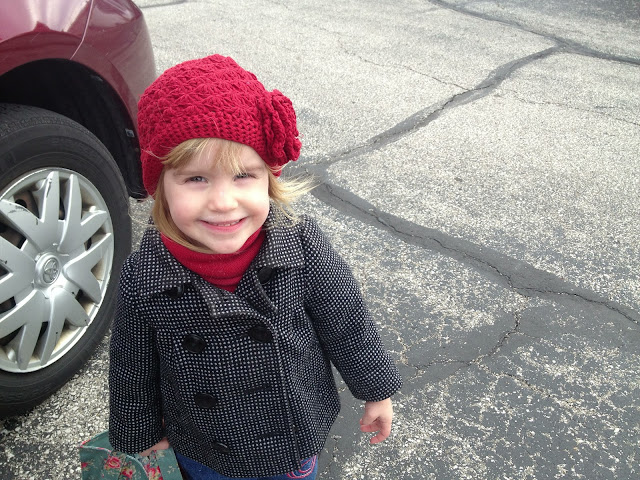 I also finished two Easter baskets for my Etsy shop this week: 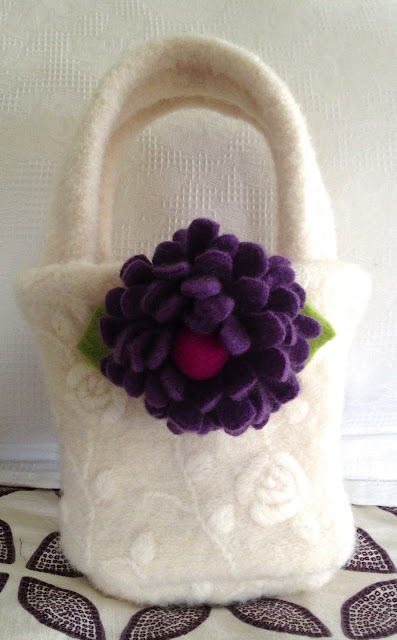 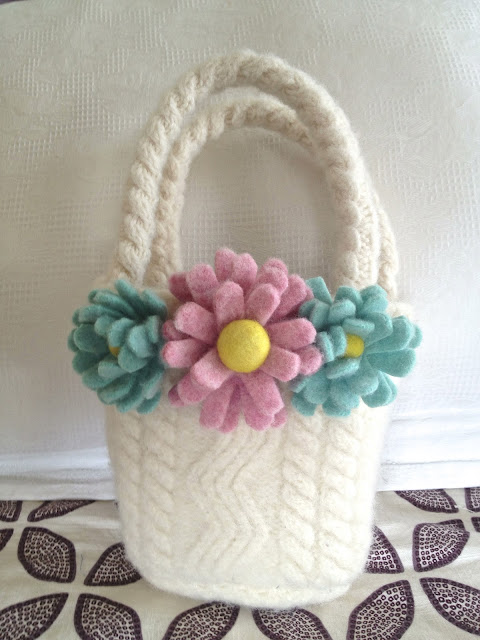 The Forgotten Garden: A Novel

by Kate Morton was just as good as I expected. I find it annoying, but very effective, that Morton flips between the 1900's, 1970's and present to tell her intergenerational story of family intrigue and mystery set in Australia and England. As with any good novel, when you get to the end you feel on a bit of a downer for a time and aren't sure what to read next.

Psalms: The Prayer Book of the Bible

by Dietrich Bonhoeffer is a short little treatise on using the book of Psalms in private prayer. It is well-written and motivated me to place my psalter with my devotional materials so that I can make use of it more.

The Book of  Psalms for Worship published by Crown and Covenant contains all 150 psalms put to singable music (similar to hymn music). This is what our denomination uses for worship, and it is an excellent tool for private devotions. These "mini psalters" are so handy for keeping with your Bible. They are the entire psalter, but in mini-size, so all you are missing is the bulk of a heavy book!

The Friendships of Women

by Dee Brestin is a book I am reading this week. Brestin describes why women need friendships and looks at several relationships in the Bible to bring out important ideas about friends, finding and maintaining friendships.

For more ideas on knitting and reading, hop over to Ginny's Yarn Along.