It's that 4h time of year again and for the fourth year in a row Andrew is working on genealogy. I couldn't be happier with his choice because it gives me the chance to delve into this family history study with him. (And it provides large quantities of time for the two of us to spend together!)

Genealogy has always fascinated me. As a young child I loved being with my relatives and even kept an extended family newsletter going for several years, wanting everyone to stay connected. I find it fascinating discovering new ancestors and little pieces of history.

My Scottish relatives are probably the ancestors that I've heard the most about -- from my mom, her brother, and my great-uncle.

Here is a picture of my great-grandmother, Christina (far right), with her parents and siblings. Great-great-grandfather Winton was station master at Dunblane, Scotland around the turn of the last century. 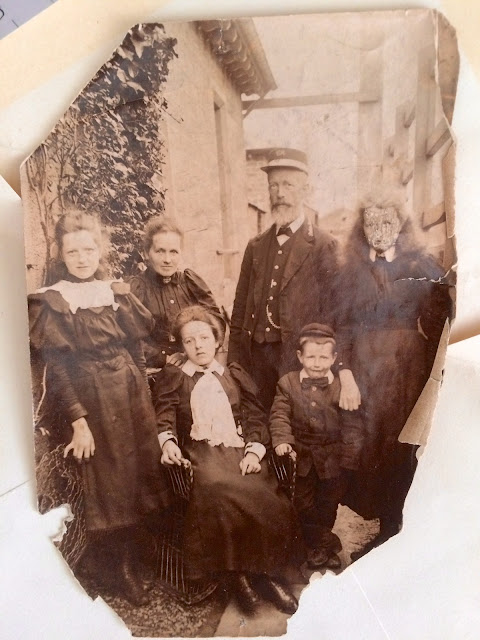 In the year before our trip to Scotland several letters we had never seen before from William Winton to his daughter, Christina, surfaced. Talk about real treasure! 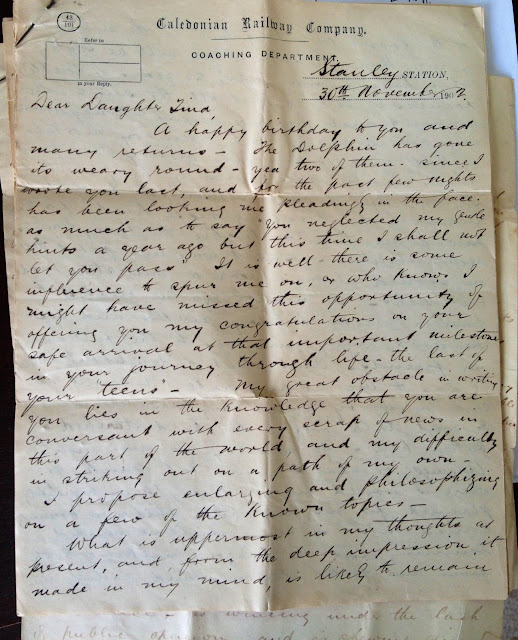 In this letter William describes a "honeymoon" he takes with his wife, Georgina, after they had been "22 years in double harness" since they had never had a proper honeymoon to begin with.

William mentions visiting Dunning and the Dragon, walking both from and to the station, calling up memories from his boyhood. This gave me new territory to explore on our trip. We had been many times to Dunblane, but this time we could visit Dunning. 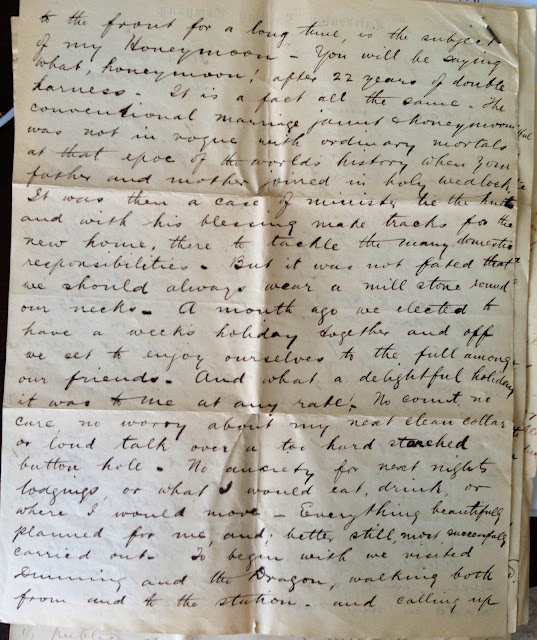 William waxes eloquent on their various walks and enjoyment of nature on this honeymoon. I love what he says on this page: "Under the inspiring influence of such a scene, we might well be pardoned for banishing dull care for a time, and directing our thoughts from nature up to nature's God." 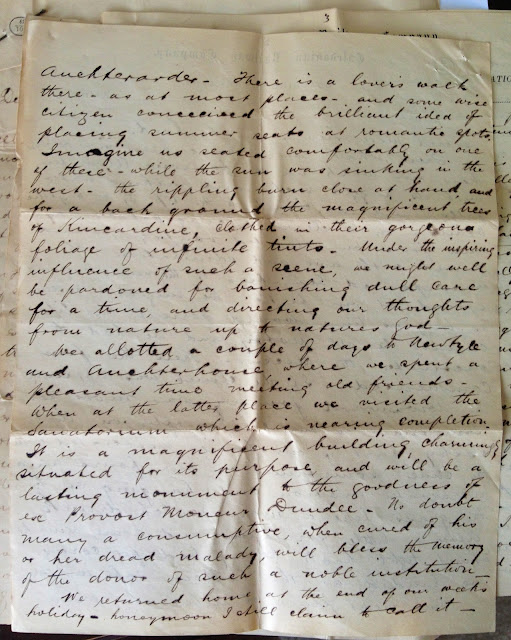 On this page William mentions the death of his uncle and talks about it being mentioned in the "Dragon." (More on the dragon later.)

I love his description of the end of this uncle's life: "He had passed the allotted span of three score and ten, and feeling that his task was finished he cheerfully laid down his pilgrim's staff and placing his trust in the omnipotent hand that had so wonderfully guided him through all his earthly pilgrimage, he without any struggle, pain, or pangs of remorse, fell peacefully asleep at the ripe age of __? A fitting consummation to a pure and useful life." What a beautiful way to pass from this life. 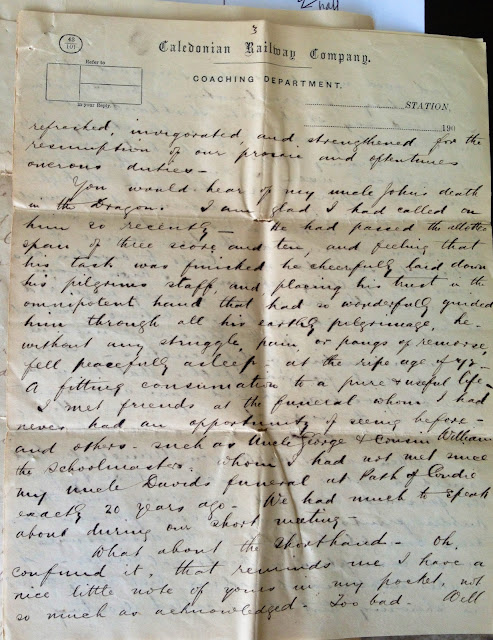 By the time I had read all five or six of these precious letters I was quite smitten with my dear great-great-grandfather. It seemed fitting that we would visit his boyhood stomping grounds of Dunning. 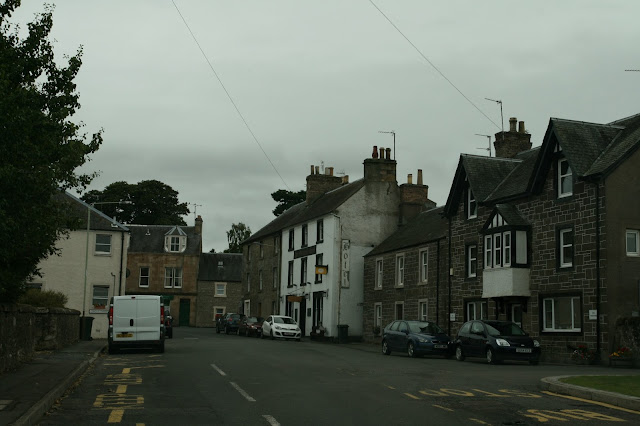 Dunning at one time had been a bustling, prosperous town. But, when the railroad was laid, it passed by Dunning a few miles outside of town and thus the fate of the town was sealed. Today it has a population of about 1,000. 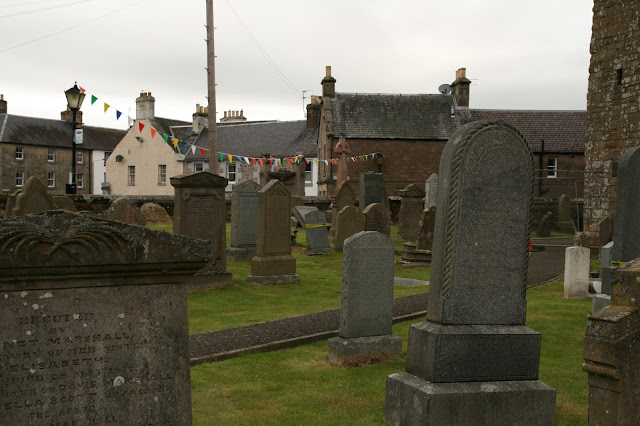 The town's claim to fame is that St. Serf purportedly killed a dragon in this area sometime around the 8th century. 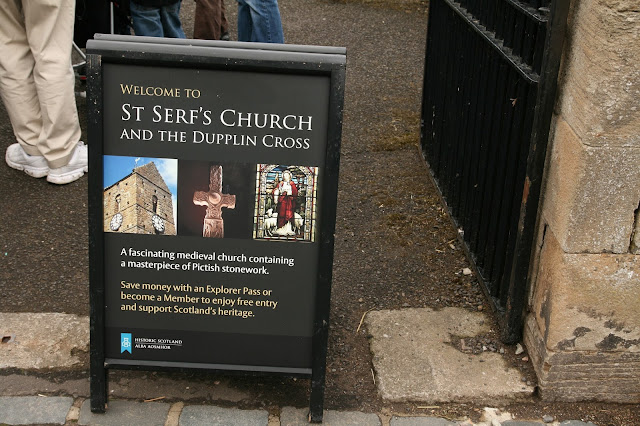 Here is St. Serf's Church in the middle of Dunning. It houses a very historic treasure: the Dupplin Cross. 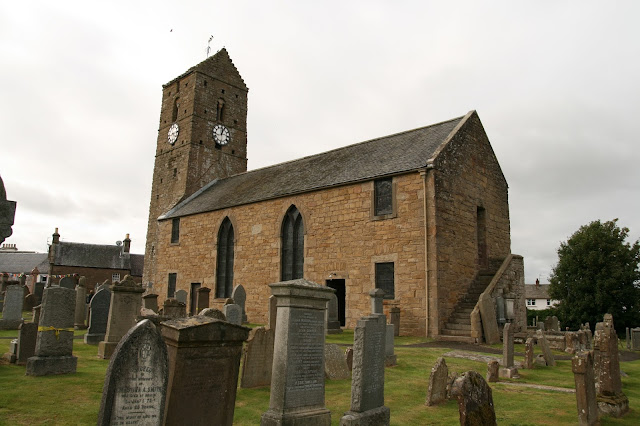 The Dupplin Cross is a Pictish stone from the 8th century that was found on land near Dunning. It's detail is amazing. Michael was fascinated by its illusions in the carvings to King David of the Bible. 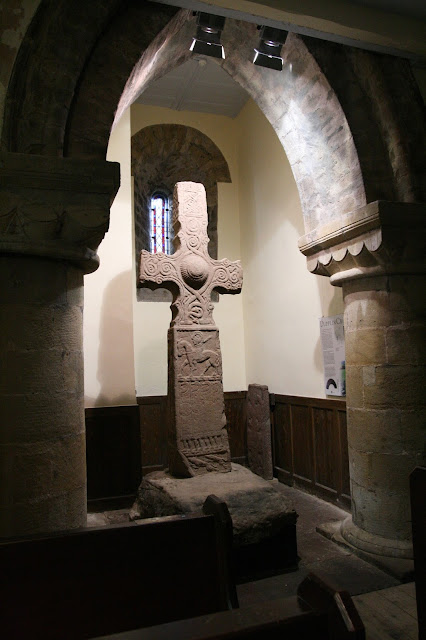 Outside in the graveyard the name Winton popped up all over the place.\ 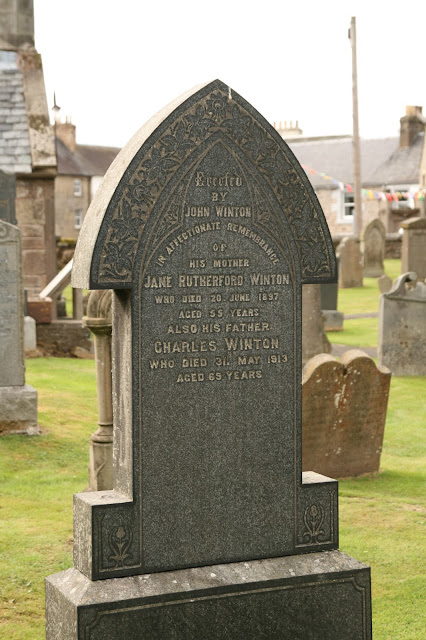 Here is Andrew posing with one of the Winton stones, thinking of genealogy and 4h projects. 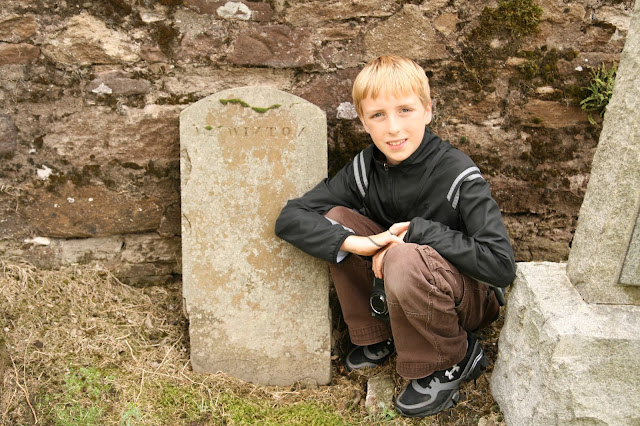 We wanted to have a cup of tea at the Kirkstyle Inn but they weren't open for afternoon business. 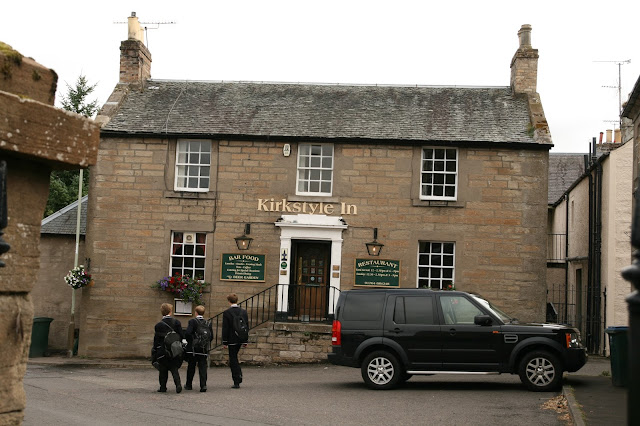 The signs here show another name that popped up in the letters: Auchterarder. 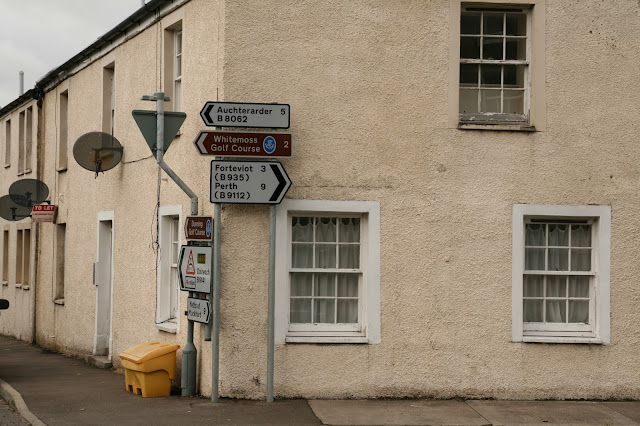 I started in the post office asking about the "dragon". (It took them awhile to get past my American accent. I guess I needed to say "dray-gun".) Then I was sent up the street to a member of the historical society who kindly came to his door when I knocked and asked about the "dray-gun". Then he couldn't understand me since I wasn't saying "drag-gun". Eventually he pointed me up the way and said that the whole area up the hill was known as "the dragon" because that is where St. Serf killed the dragon. 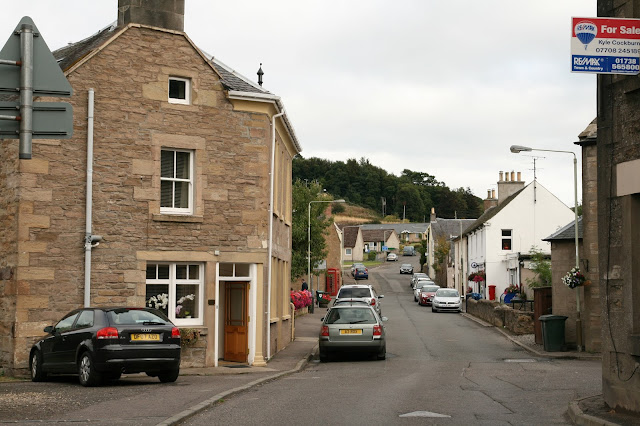 Up the hill (or, rather, "up the dragon") we drove until we came to a line of houses which is known as "Newton Pitcairn". This is the tiny village in which William Winton was born and grew up. 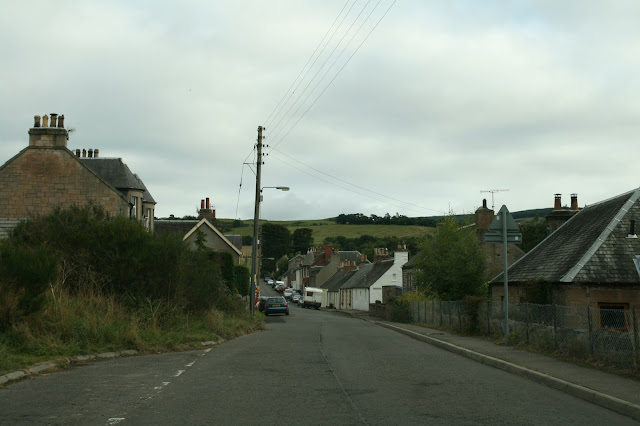 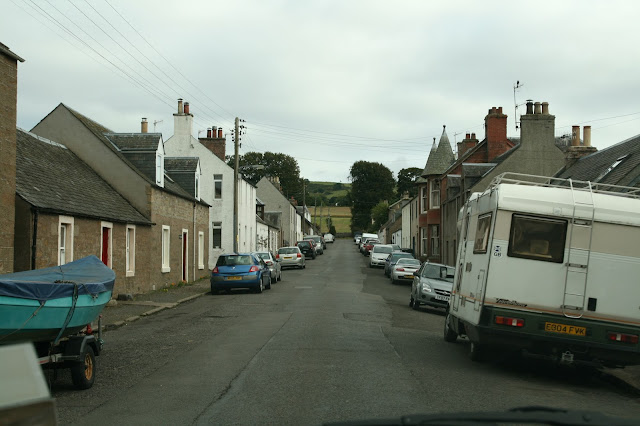 I saw that this house is known as "The Dragon House". That left me to wonder if "the Dragon" William's uncle's death was written about in was some sort of newspaper common in this area. 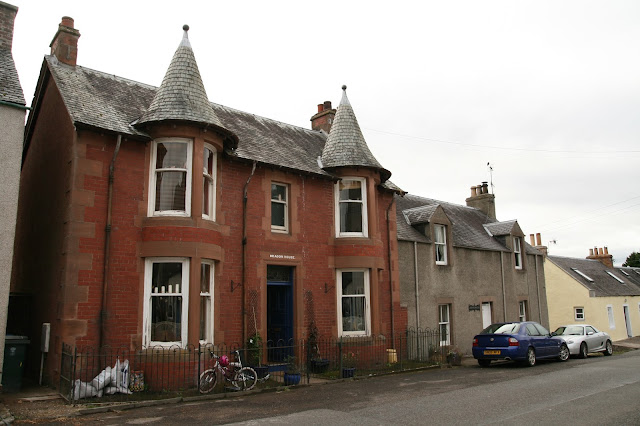 I believe William's relatives had been weavers at one time and then his father may have worked as a laborer on the railroad. They were simple folk but evidently had a great regard for family and for God. 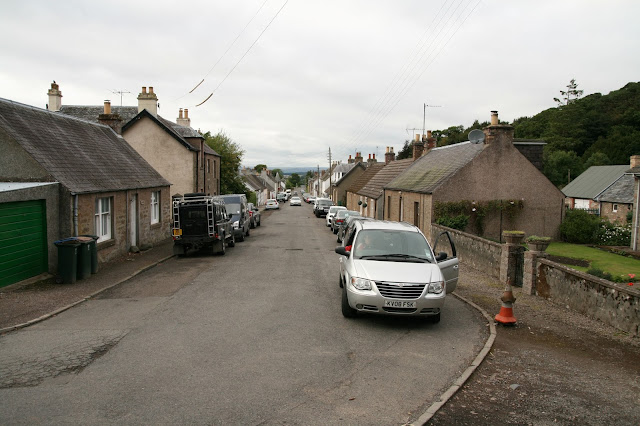 Here is the official sign. I find it interesting that when William Winton built a house in Dunblane he named it "Pitcairn." I think he was sentimental. 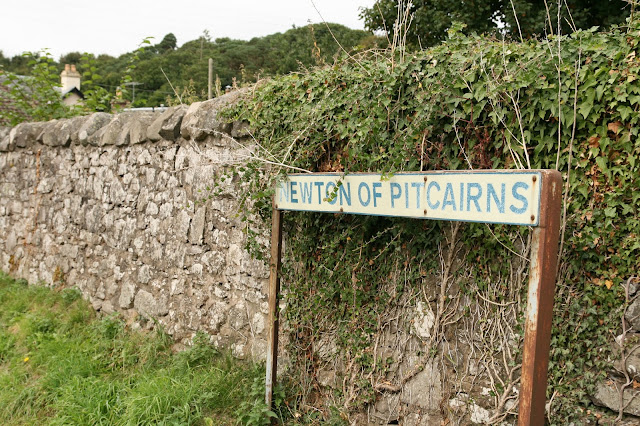 We continued up and beyond "the dragon" to get a look at the surrounding countryside. 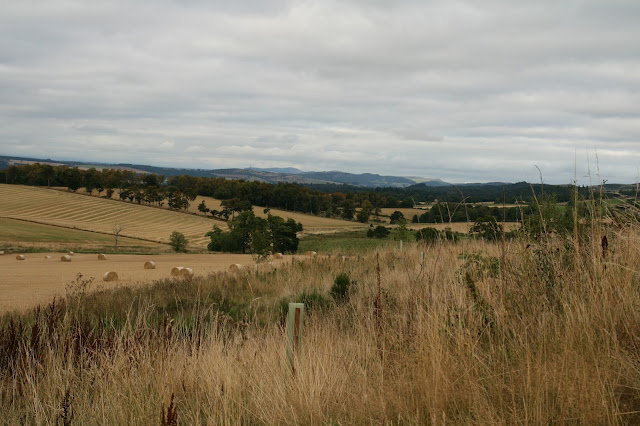 Just beautiful!!! William must have loved it here! 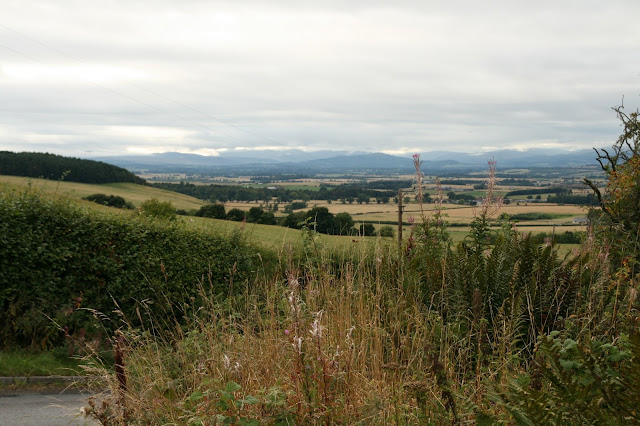 And then we had to take a quick jaunt down the road to view the ruins of the Roman fort that probably gave Dunning its name (Old Irish "dunan" -- little fort). All that is left is a very visible ditch. But it's fun to think about what was here so very long ago. 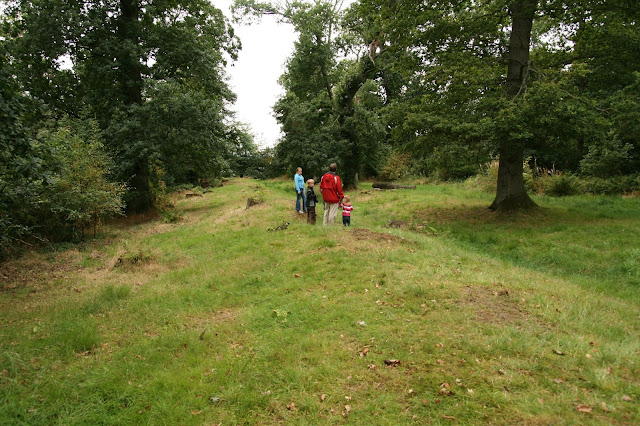 And that was our visit to Dunning. It was quite special to get a glimpse into William's life just a bit more and to imagine him walking from the town all the way to the train station (several miles). Next time I'll take you to Dunblane, the Cathedral, and the family home.
Posted by Heather LeFebvre at 11:06 PM

How very fascinating! Thank you for sharing William's lively and affectionate letters. Who would have thought there was a lover's lane in Auchterarder! I love reading letters of past times - people seem to have put so much of themselves into them, I suppose because it was the only way to communicate in those days. I believe that the age of the uncle was 72. Also, here is a link to a page about the Auchterhouse Sanatorium: http://www.auchterhouse.com/history/sanatorium.htm

I remember my elderly neighbour Mary Morrison (1908-2003) talking about the wonderful holidays she and her husband took within Scotland. I think there's so much to be appreciated here in this country. There are a few places in other countries I would quite like to see, but I would be happy to take nearly every future holiday here.

I look forwards to your posts about Dunblane. I haven't been there for years, but pass by on the train, where you can see across the river to the Cathedral... I will think of your ancestor William when next stopped at the railway station there!

I love researching ancestors and enjoyed reading about yours!

I own an old cello and inside is hand written:

I bought it from a friend who I think got it from a second hand shop.

I would love to know if anyone knows of a Dunning around that time who either played, or made cellos. Perhaps the date is significant - a birthday, for example?

If this is of interest I have some photos I could send.

Many thanks for your blog. I have stumbled across it from time to time, but yesterday actually read William's letter! Fascinating. But low and behold, the uncle John he wrote of was my Great Great Grandfather, John Hay Winton. So you can image I was so thrilled to read the passage regarding his passing!
John Hay Winton was born in Dunning on 13 May 1830 and died in Dunning on 19 Nov 1902. He indeed was a weaver all his life, and lived in Newton of Pitcairns and in later years in Circus Street, Dunning. He and his family are buried in St Serf's kirkyard.
Your William Winton's parents were Robert Pearson Winton and Elizabeth Winton. This Elizabeth Winton was my relative (GG Aunt), and brother to John Hay Winton. Their parents were William Colin Winton and Elizabeth Hay, who were married in 1825 in Dunning, They lived in Newton of Pitcairns all their lives and were weavers, too.
My wife and I live in Australia but have been to Dunning many times. We love it there, love the history, love the family links.
Kind Regards,
Wal Collins

Wal, thank you so much for sharing about our mutual relatives! I especially appreciate names and dates! I'm so glad I shared the letter and that you found it!!

Jennifer, so lovely to hear from you! It's so fun to think we are cousins a few generations removed. We don't know any related Wintons here in the states.

Hi Heather. I have just read this wonderful letter in full. I realise that all the other people mentioned are my direct family. Uncle George is my great grandfather, George Hay Winton, schoolmaster in Whittinghame. Cousin William must be his son, we thought a pharmaceutical chemist. Uncle David is also my great uncle. Cousin William is my grandfather’s brother. My grandfather was Nicholas Dodds Winton. He died in America, in Pennsylvania when my dad was very young so I never knew him. Neither did my dad who knew very little of his family history. I have a lot of Winton relatives still in PA but have never visited myself. Sorry to ramble but I find this amazing. It has taken years to piece together any of my Winton family history. Thank you again for sharing this letter

Does anyone know who Elizabeth Winton (Hay) parents were? I have helped put this family of Wintons tree together on geni.com
Thanks, Ian Winton

My name is Fred Campbell. My Dad,also Fred Campbell was married to an Agnes Ryan , who was brought up as a Kay. Agnes therefore used her Grand father's surname as her maiden surname when she married Fred in August 1969, at Auchterarder.

My mother's mum's was a Helen Scobbie. Just to confuse matters Helen Scobbie was married 3 times. Her first marriage was to a John Dignan Ryan, in May, 1952. Her second marriage was to an Alex Seivewright, sometime in the 1960's. Alex died in a accident in 1966. Helen's third marriage was to a Thomas Riddle. They were married either 1967 or 1968. My mum descends from Helen's first marriage. I'm related to the Winton's through the Scobies. My mum was born Agnes Ryan but was brought up as a Kay.
She was brought up by her maternal grand parents. Agnes's grand parents were Agnes SCOBIE and James Kay. James Kay was Agnes Scobbie's second husband as George Scobbie died in 1936. This explains why Agnes used Kay as her maiden name upon marriage.The Agnes Scobbie married to James Kay had Thomas Scobbie and Mary Brown as her parents. The Thomas Scobbie who was married to Mary Brown had parents who were named John Scobbie and Agnes Adams. John Scobbie's own parents were in turn John Scobbie and Margaret Winton, which brings us at long last to your Wintons.

Elizabeth Winton (nee Hay) was my GGG Grandmother. She was born 19 Feb 1798 in Perth, Perthshire to John Hay and Elizabeth Brown. They had been married in Aberdalgie on 4 March 1788. John Hay was a tailor, and at one stage the Deacon of the Taylors Incorporation of Perth. Elizabeth Hay was one of 6 children.