Now that Michael is home I have the remaining pictures from our time in North Carolina!

Here's the best picture I have of Emily, Christina, and me from the wedding. 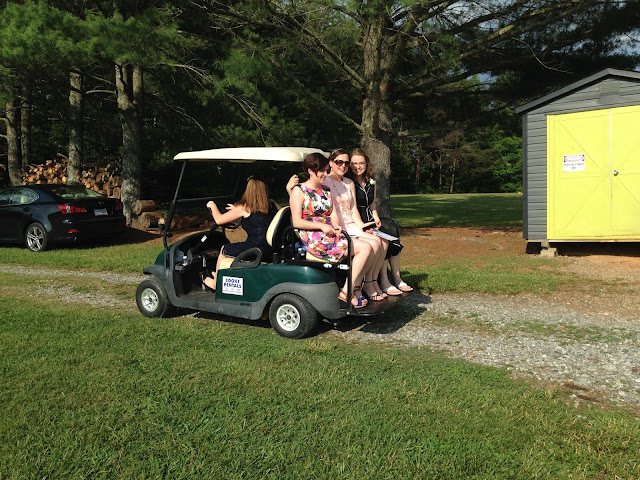 I think the highlight of the boys' weekend was driving the golf carts!! 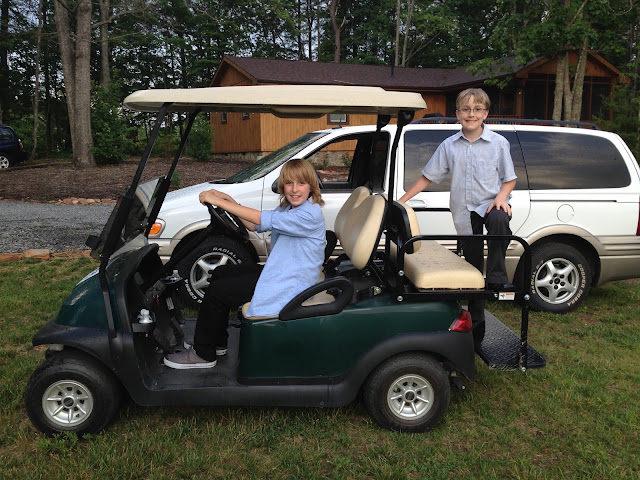 It was so fun to get to know Aunt Georgie's side of the family since we had never met (they are from England). Here is Christina chatting with Jeannie and Terry. 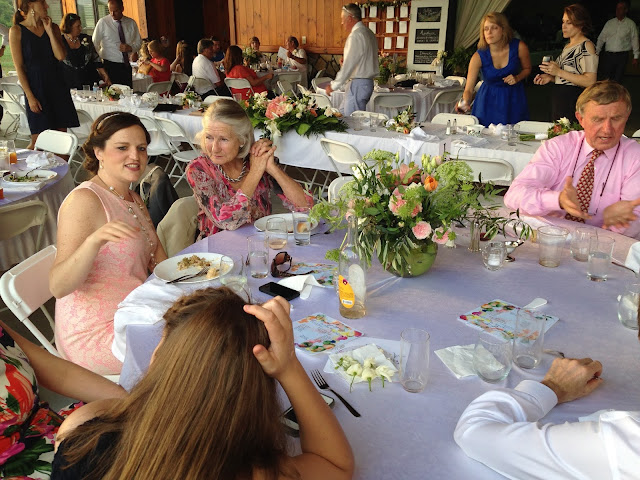 I had a lot of fun getting to know Aunt Georgie's niece, Emma, who flew in from Japan for the wedding. 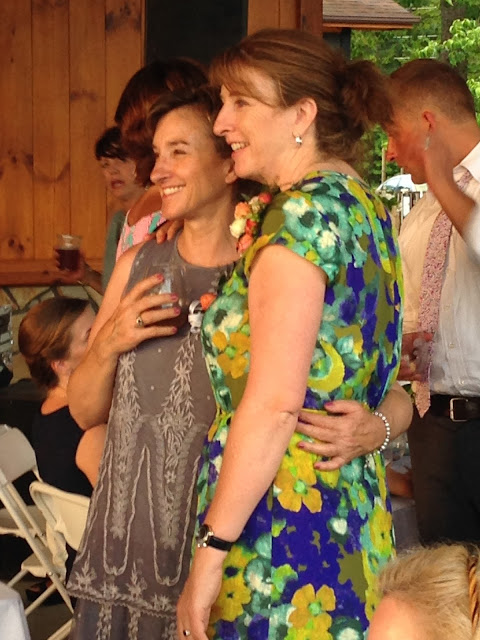 The sunset brought a beautiful glow to the reception. Some of my favorite photos from the wedding photographer were of the bridal party twirling on the lawn in front of the grapevines in the setting sun. It was magical! 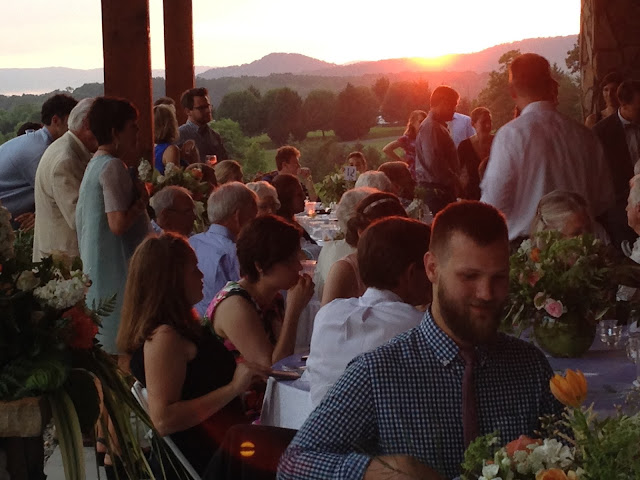 Laura and Lia are off to a good start on getting to know each other. When I was young we spent a good bit of time with our second cousins so I knew them quite well. Hopefully these girls will have the same chance in the future. 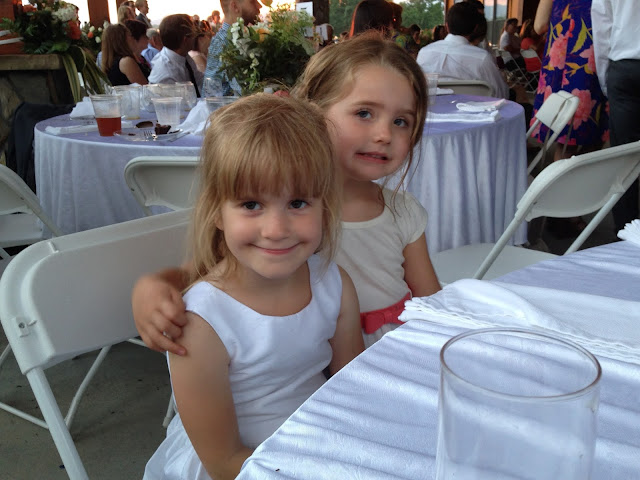 Sparklers made a beautiful send off for the bride and groom. 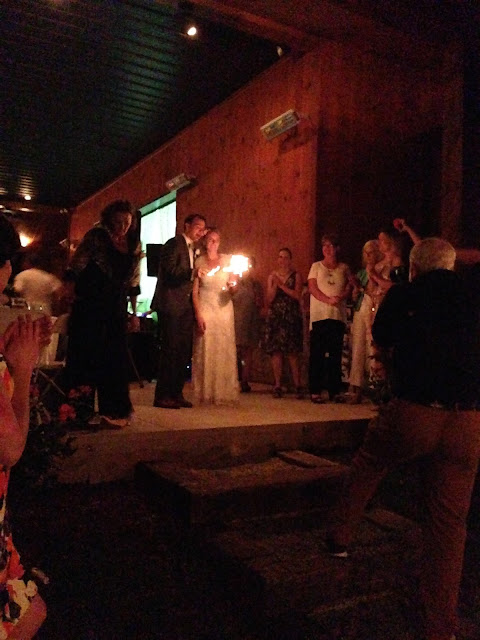 It was a lovely ending to a near perfect day! 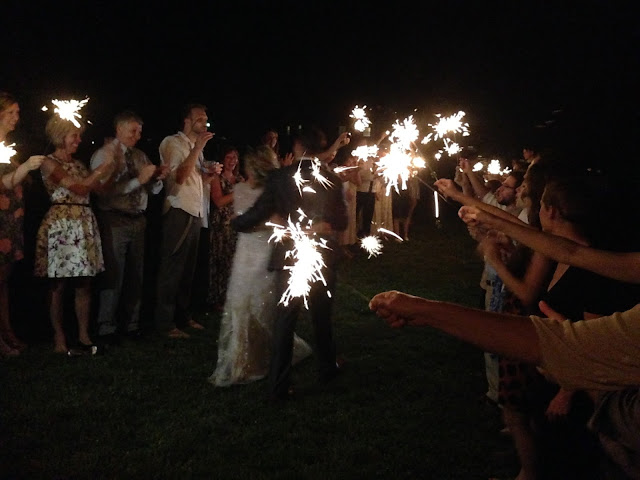 It was fun for us to stay as a family at the wedding hotel. The kids loved the free breakfast in the mornings!!! They even had gluten-free muffins! 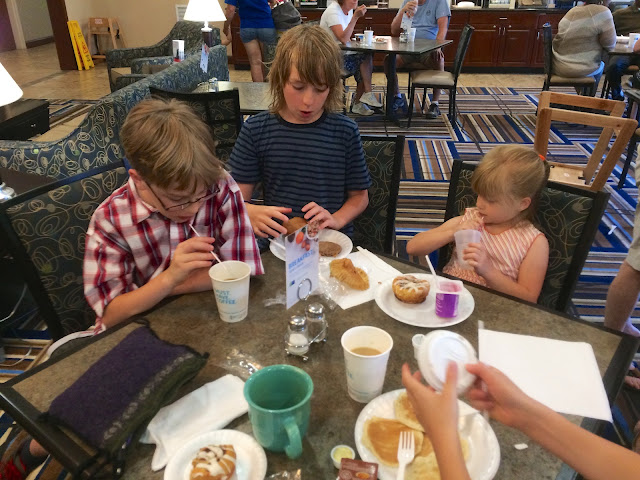 After church on Sunday we headed south to visit Michael's sister and her family. More cousins for the kids!!! 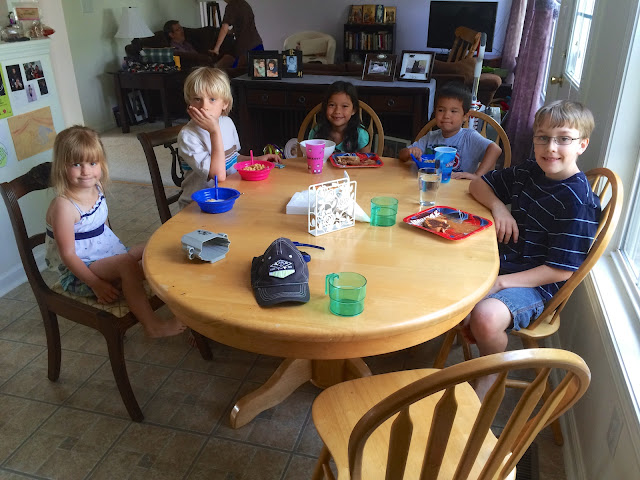 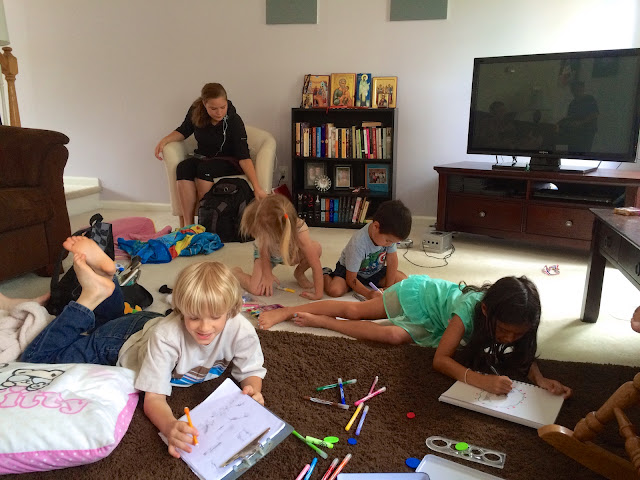 Rachel had the added luxury of being able to stay the whole week and come home later with Michael. 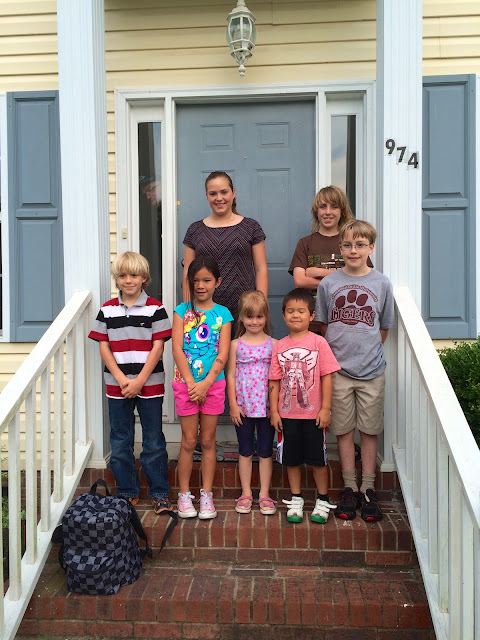 I love this picture of Laura and Niko with mouths opposite. Ha ha! 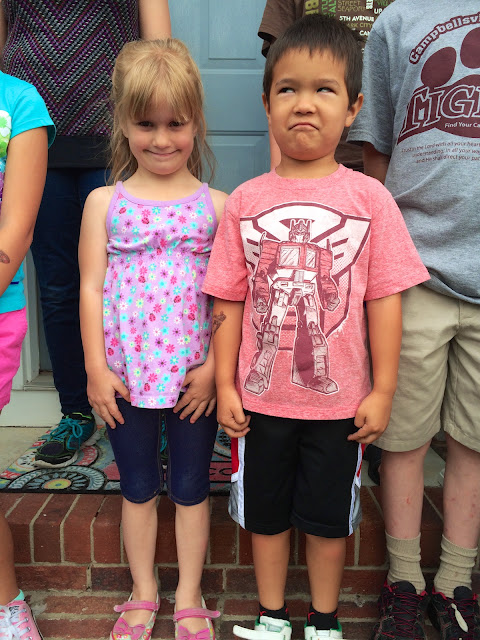 Coincidentally, or should we say, providentially, Michael needed to be in North Carolina, not ten minutes from my aunt and uncle's house on Monday. I'm afraid I couldn't resist the chance to invite myself over for a quick little visit to see their new home. They only had six weeks to settle before the wedding but they managed to do SO much in that time. 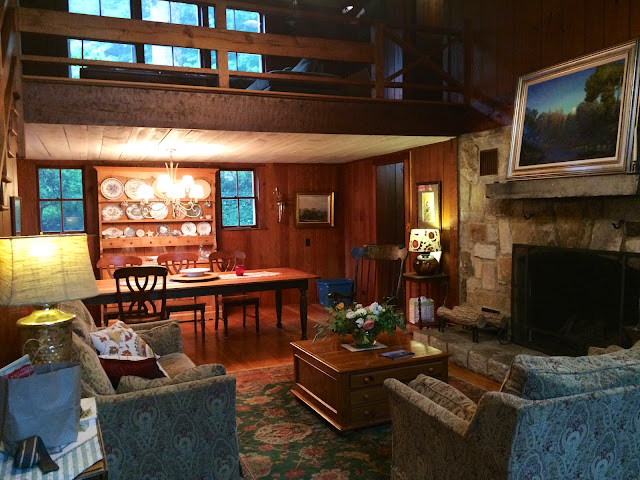 I kept thinking of Rydal Mount, William Wordsworth's home in the Lake District, as we walked around Uncle Bob and Aunt Georgie's new place -- it must have been the dripping rain, the closeness to nature, the perfectness of the place for writing, the stone walkways, and the escape from hecticness that characterizes this place. 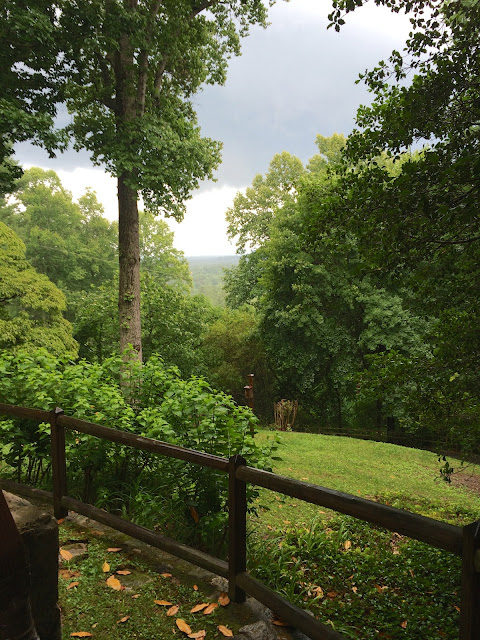 Included in the grounds are two guest cabins. How fun is that?! 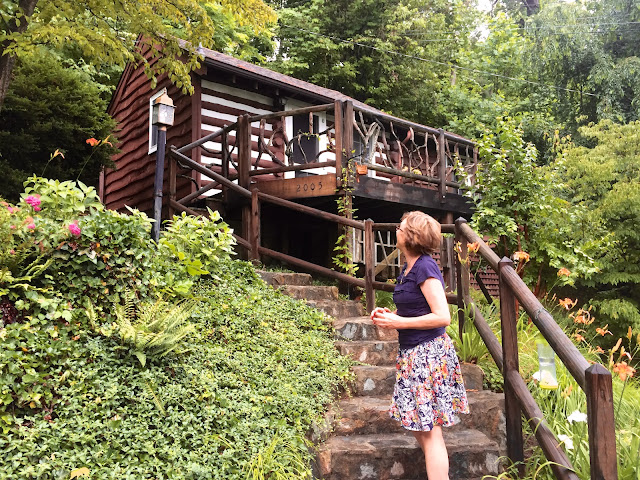 I would love to have guest cabins! Think of the possibilities! Of course, I would probably find myself living in the guest cabin because I'm always looking for little hideaways.

My pictures don't capture the adorableness of these cabins. They were right out of the British Country Living magazine -- there were black and white tiled vintage kitchens, screened porches, fireplaces, sunny windows with round tables and flowers, hutches filled with china. Definitely the makings for many memories. 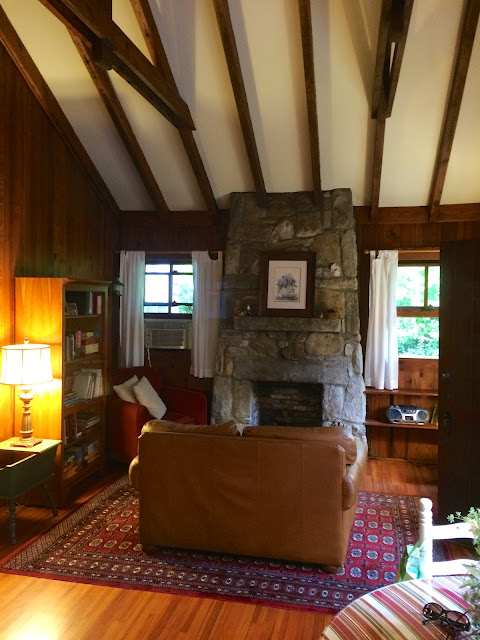 Aunt Georgie insisted we had time for a cup of tea -- earl grey of course! Aunt Georgie is the one who introduced me to early grey (loose leaf too!). 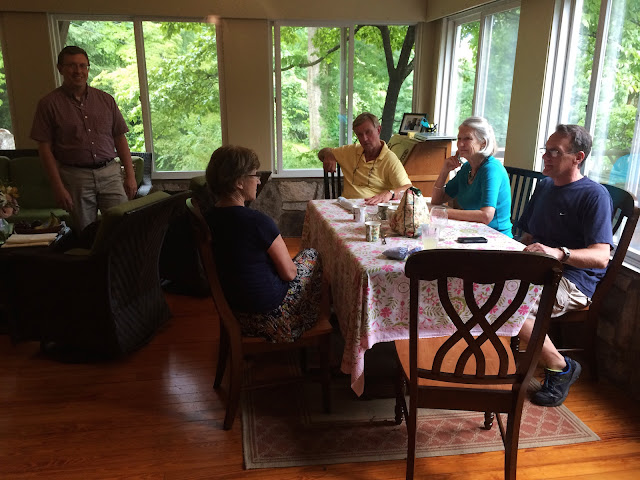 And Uncle Bob served up his secret lemon and ginger drink. Oh it is so good! If you like ginger beer (that is a soda, not a beer), you will LOVE this!!!! 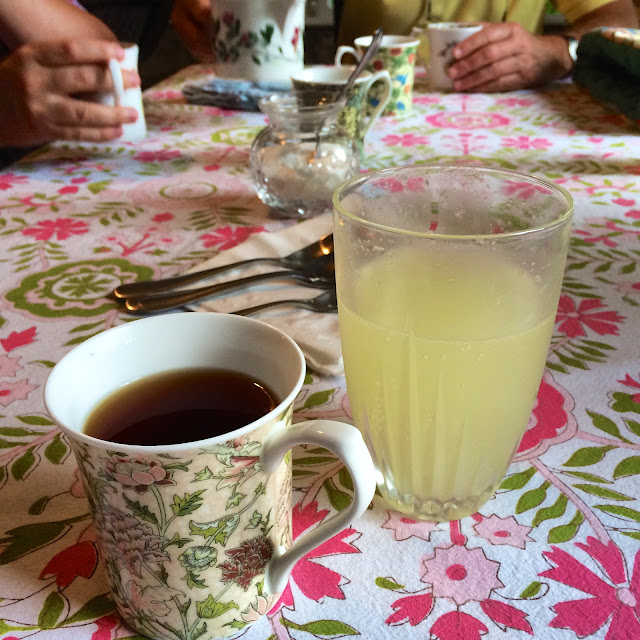 The next day I set out with the four younger children to head back to Indiana. First stop was Aunt Deb's house to pick up my mom. (And a few plants from Aunt Deb's garden.) 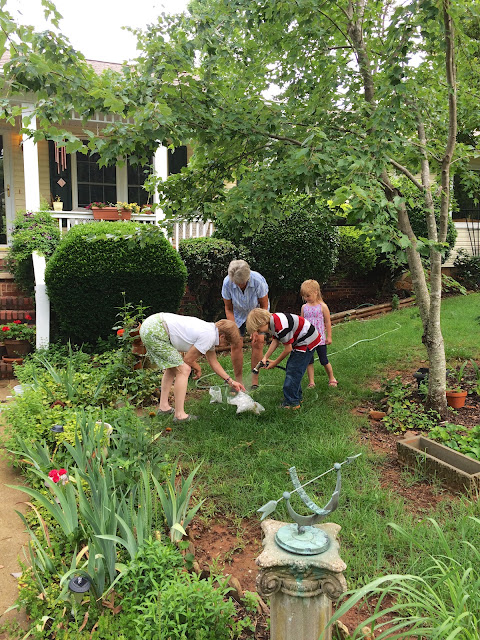 Aunt Deb's house was filled with family art. It was so fun to walk around and discover it all. Here is a painting by my maternal grandmother. 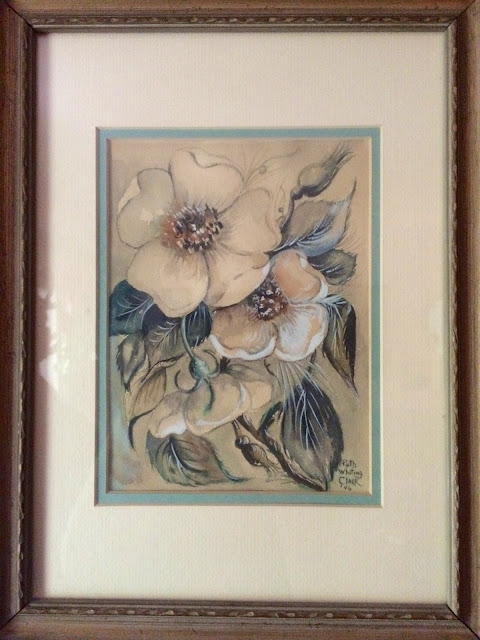 In the bathroom was this early acrylic of mom's which Aunt Deb rescued when mom wanted to throw it out. 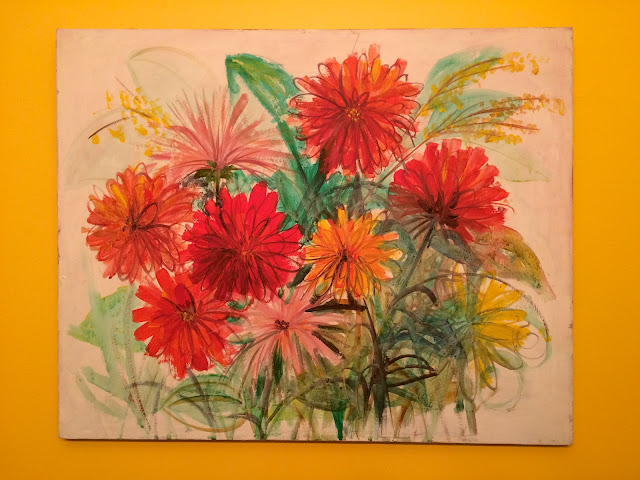 And this one Aunt Deb did herself -- of somewhere in Scotland or Ireland. 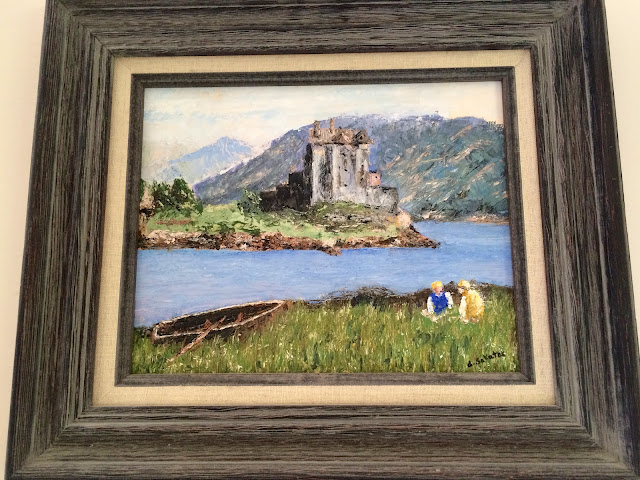 On the way to the basement were a few wall hangings mom did before she had us. Funny how things come around again and now I do this kind of stuff with wool. 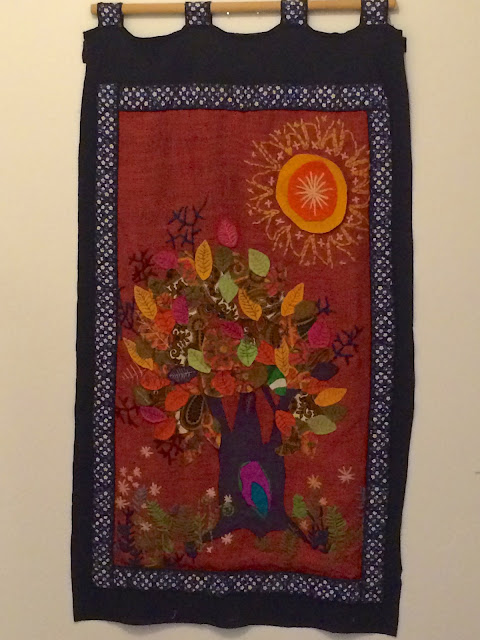 Meanwhile the boys were getting hooked on drums in Uncle Greg's studio. 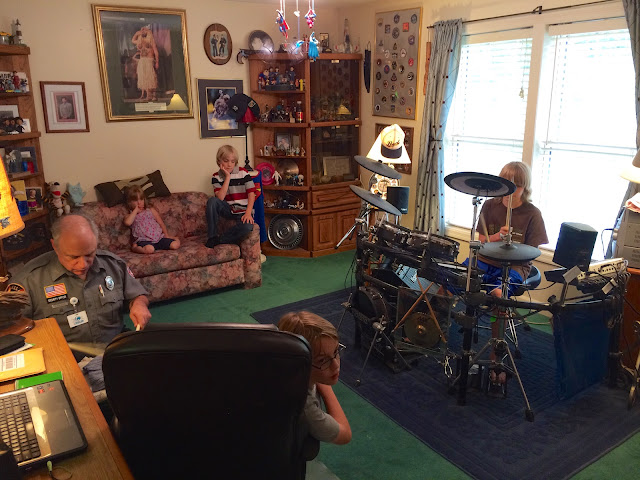 On our way again we decided to take a bathroom break in Biltmore Village where even the McDonald's looks regal! (It included a grand piano.) 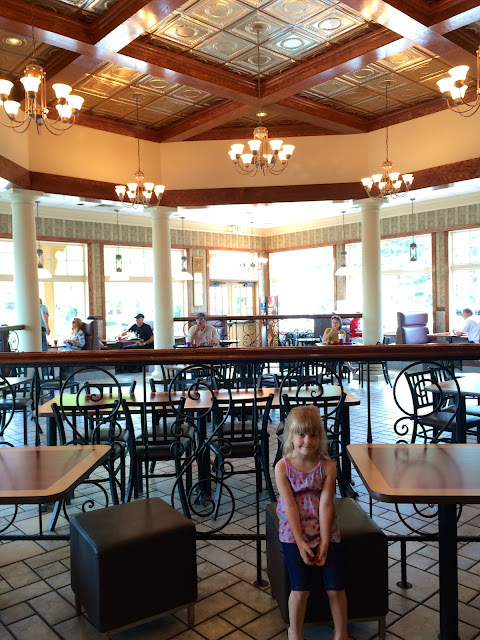 Somehow our middle-sized drive stretched into a total of 15 hours from leaving Auntie Cole's in the morning! Yikes! We did break it up a bit by stopping for dinner at IKEA so mom could be introduced to this phenomena. I hadn't been there myself in ten years! We were pleasantly surprised to discover dinner for kids is free on Tuesday! Nice! 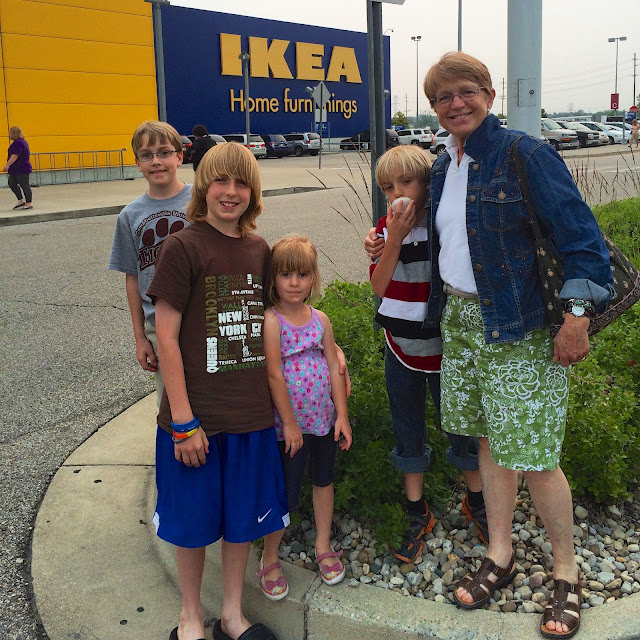 We made it home in one piece and we all agreed it was a fantastic trip!!!
Posted by Heather LeFebvre at 5:29 PM

Beautiful photos! And you all look so summery. I wore tights today, it has been so chilly in Scotland. I wonder if the painting of the castle isn't of Kilchurn Castle near Dalmally? http://castles.niceworld.info/england/slides/Kilchurn-Castle-Loch-Awe-Scotland.php

Your mother has a beautifully engaging smile.