Today was our last day of school!!!! In some ways I didn't want it to end as there was a very nice, satisfied feeling to being on, say, day 178 of 180 and having the whole summer to look forward to. The kids were excited and we celebrated with ice-cream cones: 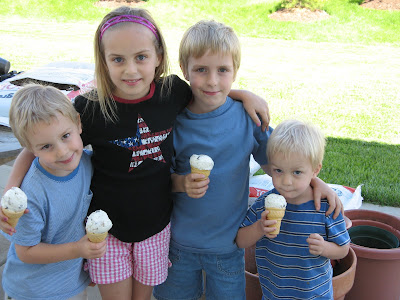 We have some new art hanging up. I can't take credit for inspiring any of it. I'm very proud of Andrew, though. We took the kids to an art open house at an art center downtown recently and we saw one artist who paints on cardboard. Andrew decided he could do the same! I wish you could see more detail in the picture. It's pretty cool! 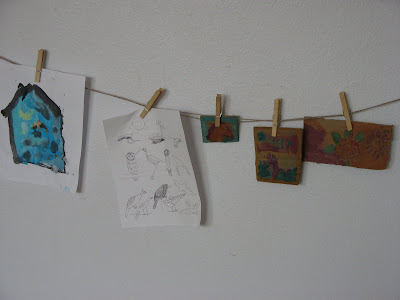 The kids and I were on our own one evening last week. Asked what they wanted to do with me and they replied "make flowers." So we made flowers. David insisted he wanted to sew too. He did very well for his first time. :) 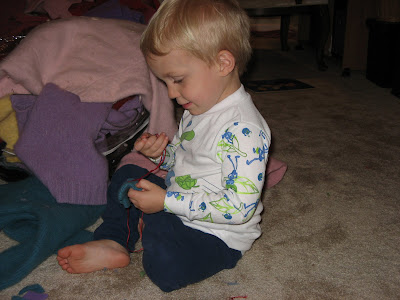 Andrew loves to make flowers most of all. In fact, he made sure I would include a picture of his flowers on this post. He is selling them for 25 cents each in case anyone would like one. 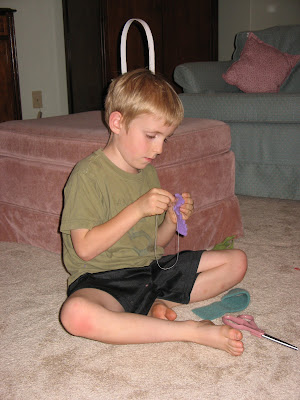 Rach designed her own flower and I really liked it. She actually gave me an idea for how I should be making mine. 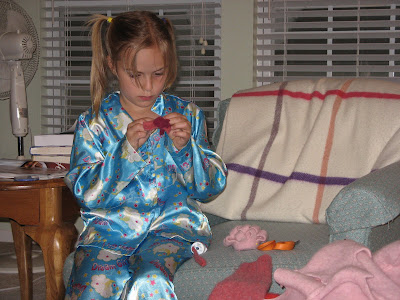 James enjoyed himself as well. 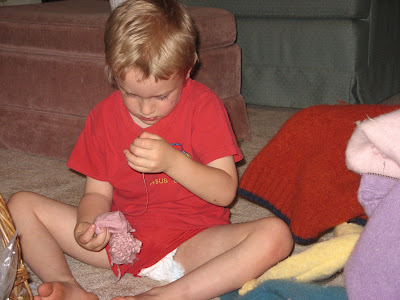 A few days later I convinced Rachel to give me her flower. :) It's going on my summer purse. 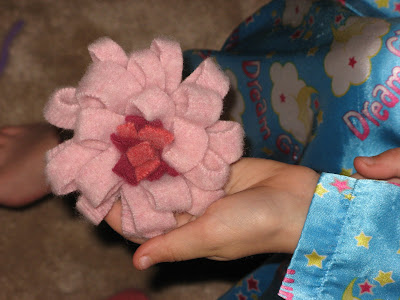 And here are Andrew's flowers: 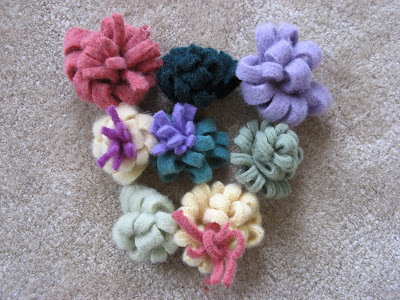 Tomorrow the kids and I are off to Conner Prairie to celebrate the end of school. Summer has begun!
Posted by Heather L. at 9:19 PM

Oh hooray. . I'd say the rhyme that I always said the last day of school. . .but in your case. . .I'm sure there are no dirty looks from the teacher. .so I'll pass on it.
The children are so clever and so ambitious. . .
I'd like to buy a few flowers. . .from Andrew. . how many can he spare? Say about 4?
Perhaps a picture of two would be nice too. . .so darling ..who could resist?

Congratulations to you! Just the other day Joseph was asking to learn to crochet. When I told him that Andrew knew how to knit, he was amazed. I just love your kid's creativity. Have fun at Conner Prairie. It's going to be a beautiful day.

I'll buy a flower from Andrew! I really like Rachel's new design! And I can't believe babycakes sewing! He looks so intent -- ha! What a cutie!

That looks fun. It's so neat that Andrew likes to sew. My Hugh enjoys it as well. He makes little pillows for Meredith's dolls. :o) And I have to ask - what is Conner Prairie?
By-the-way, did the stamps arrive yet?
Rachel L