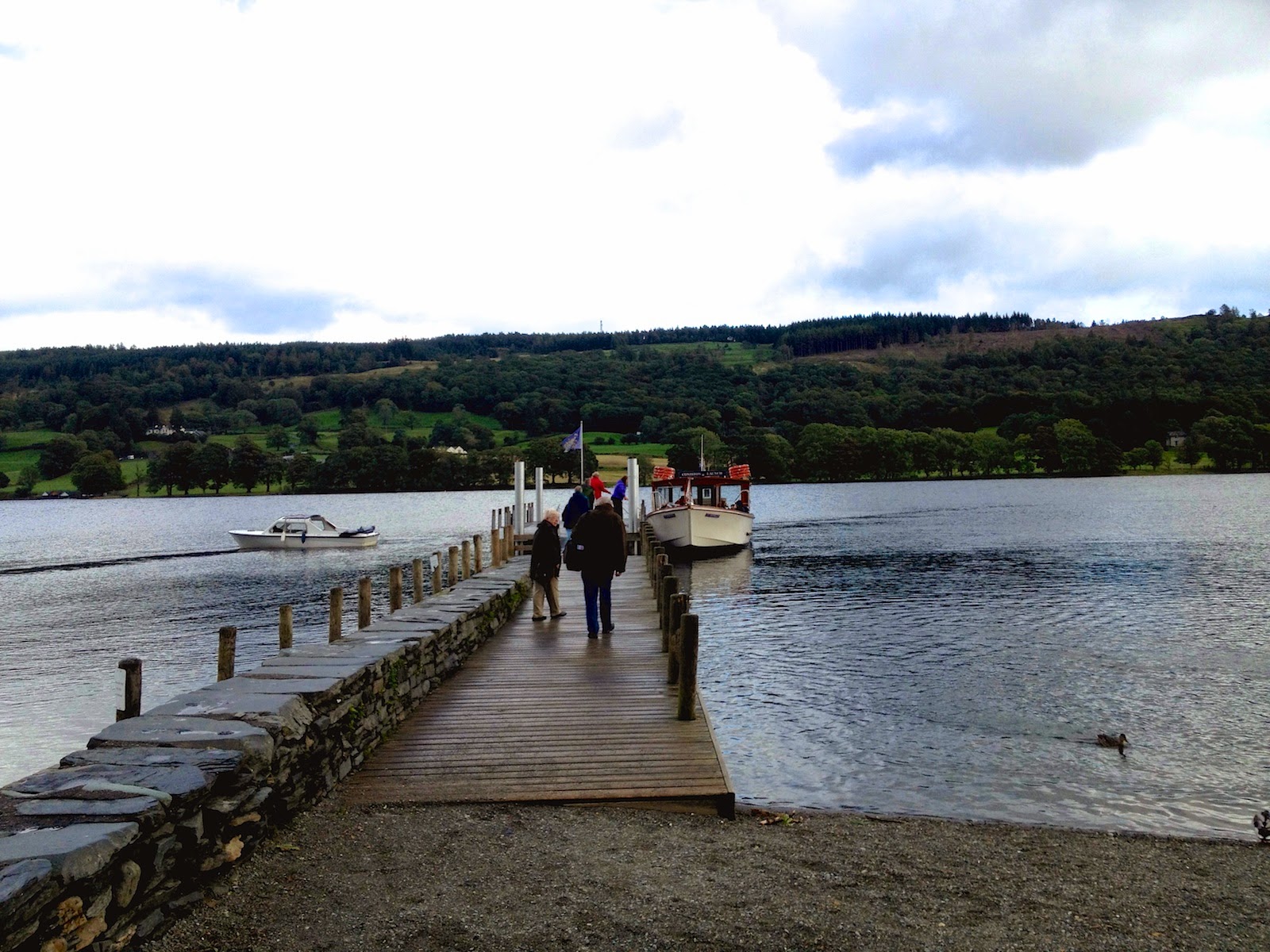 Arthur Ransome lived in the Lake District for much of his life and he used bits and pieces of the countryside and the people he knew to invent his Swallows and Amazons stories. So, you can't go to any exact places mentioned in the books, only places that seem as if Ransome was inspired by them. Although, there are a few places that can be relatively sure to be what Ransome had in mind.

Here is a map of the Lake District with the places that inspired Ransome and showed up in his stories. 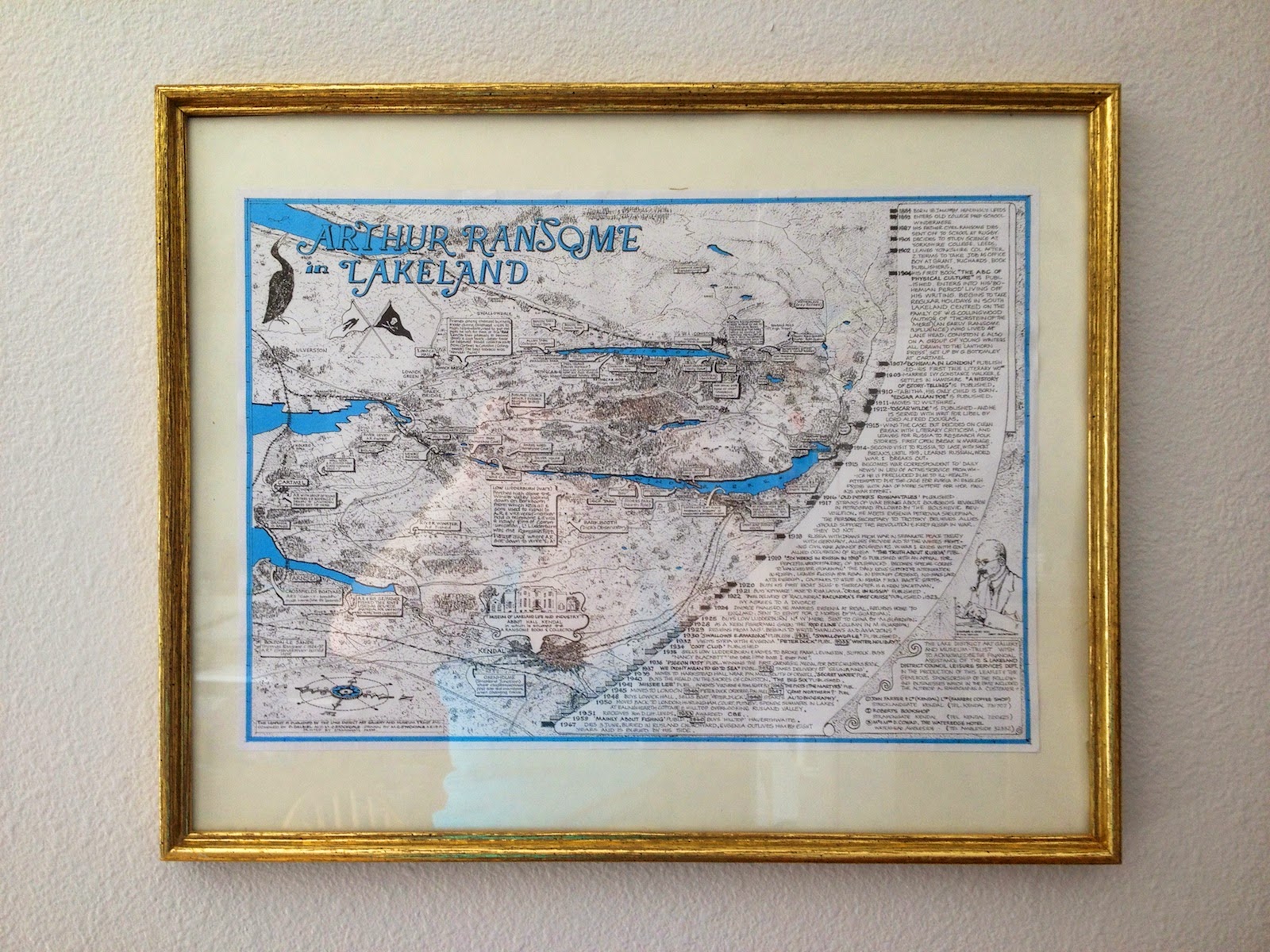 Right across from the Coniston Launch are three houses, from left to right: Tent Lodge (known as Beckfoot), Lanehead (Beckfoot), and Bank Ground Farm (Holly Howe). You can see the little boat sheds down by the bank of the lake. 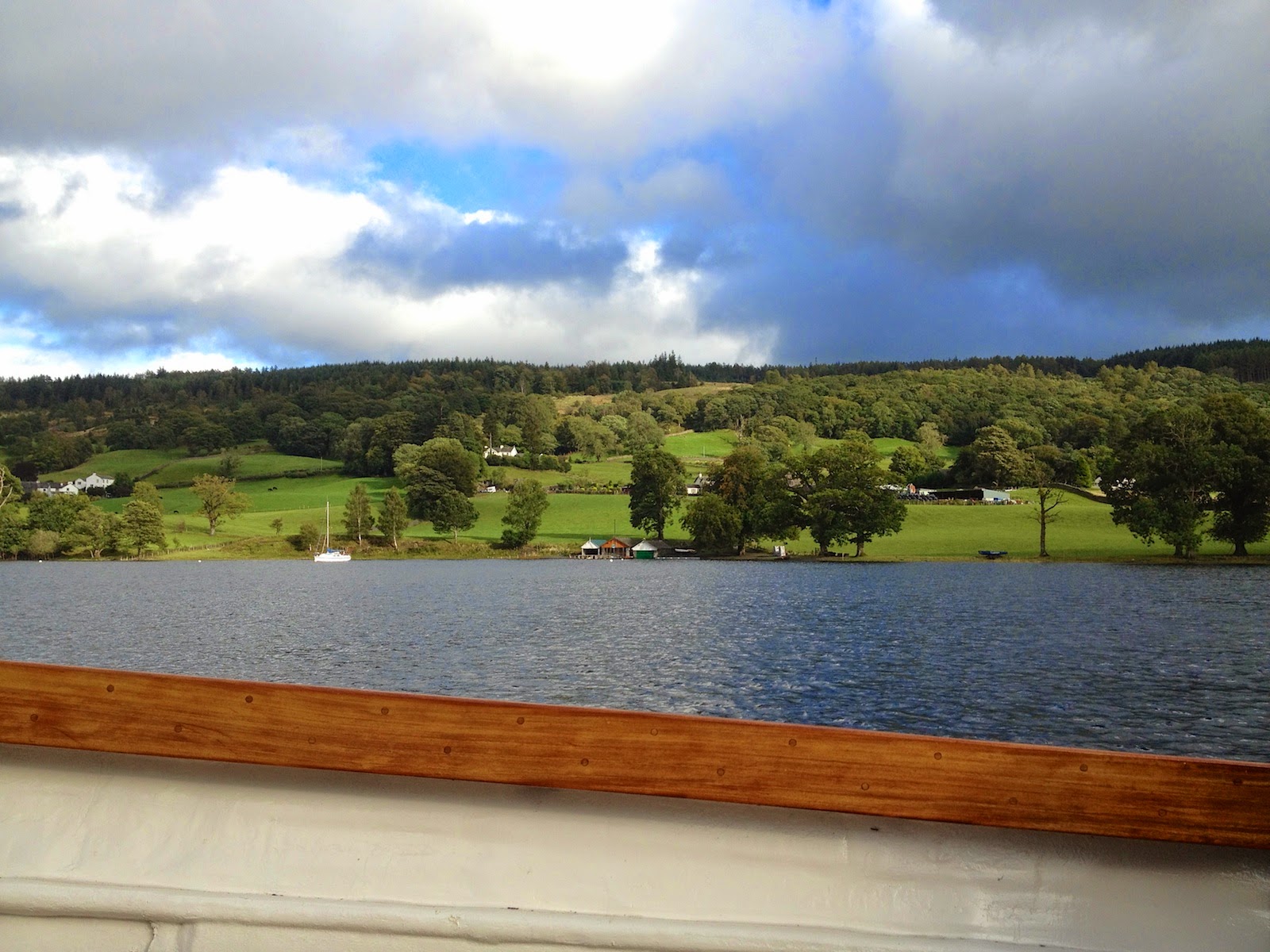 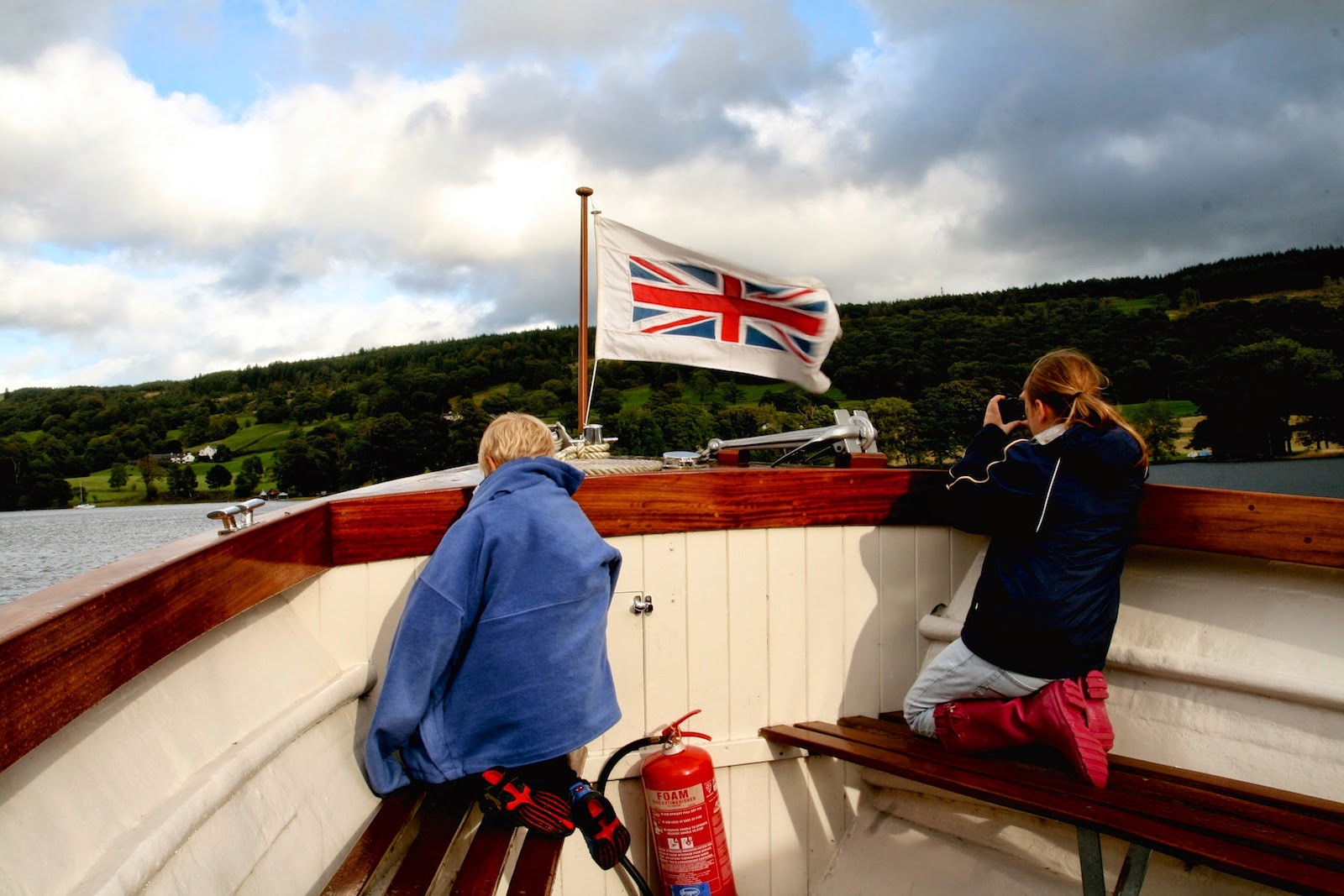 A better glimpse of "Holly Howe": 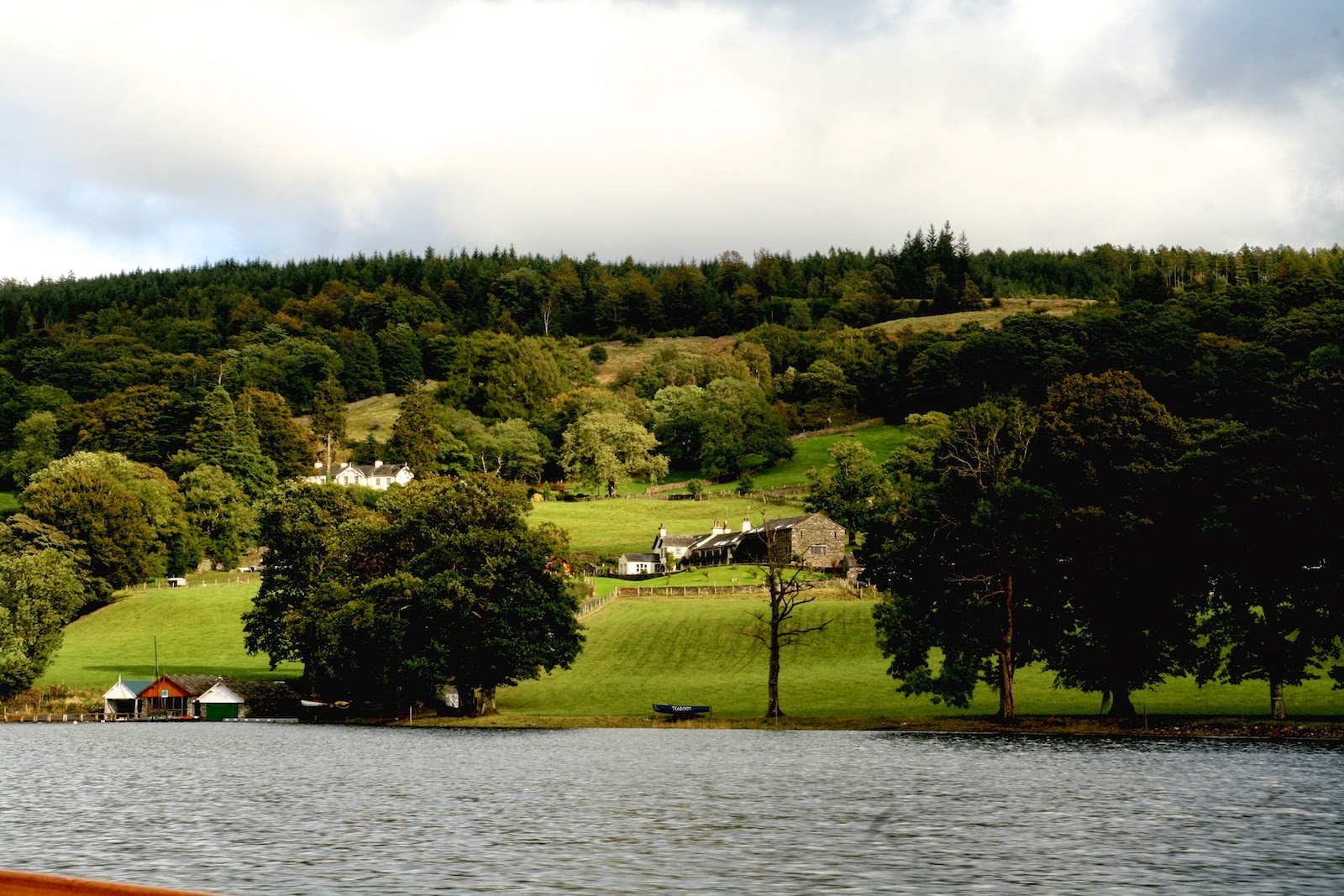 Very exciting to see the very places we read about! 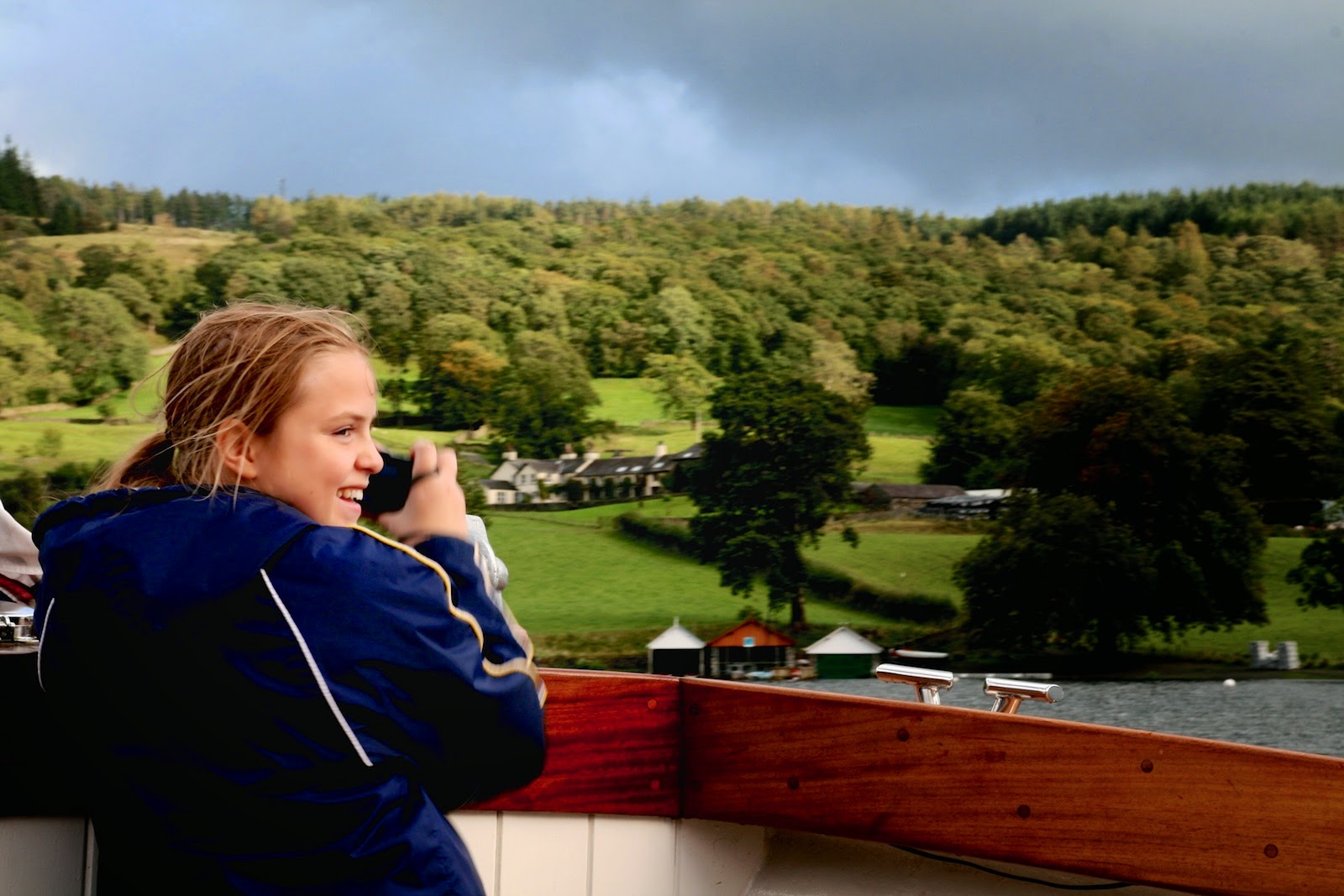 Closer view of the boat landings -- off to the right is a small boat with a pirate's flag -- owned by our incredibly knowledgable tour guide. 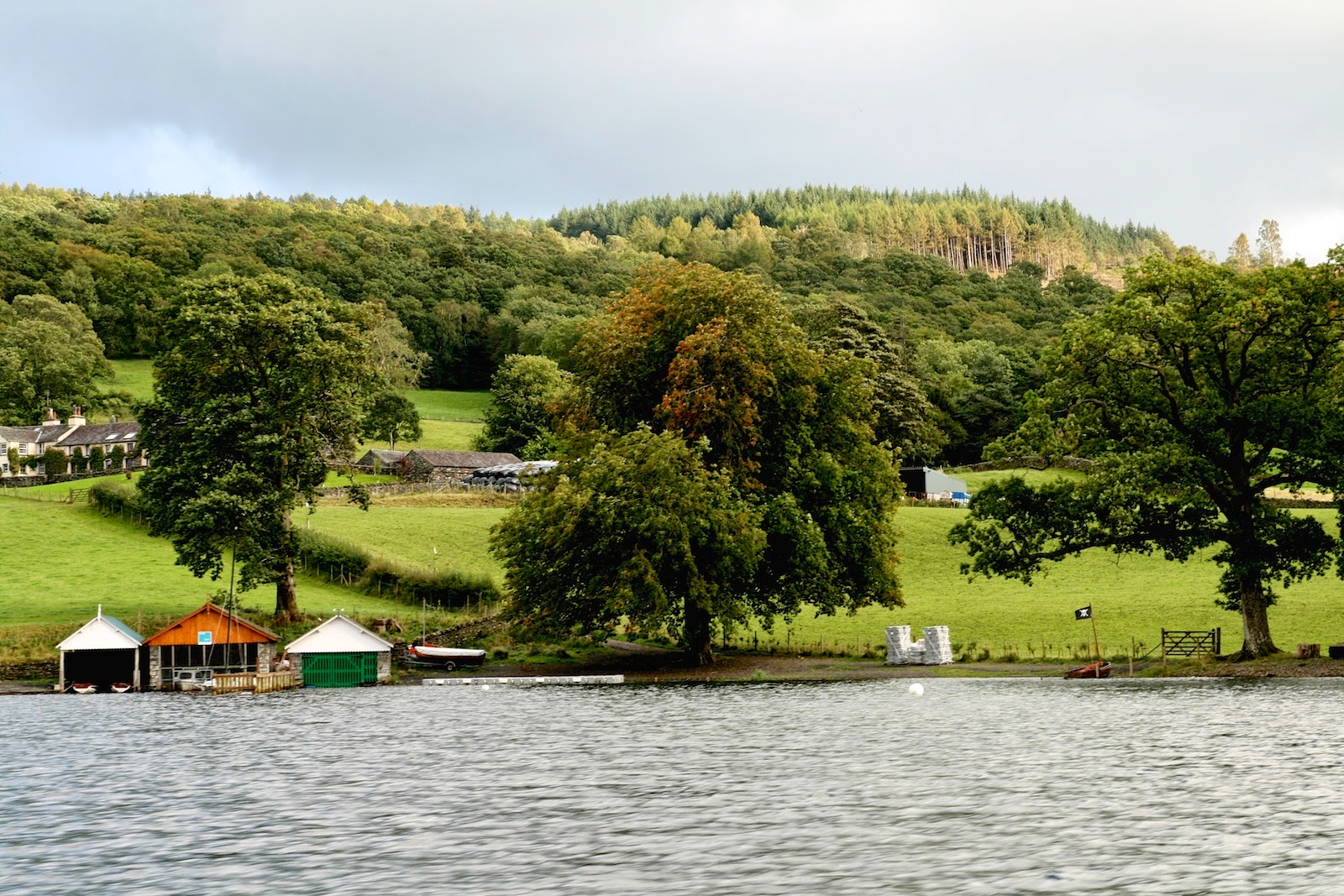 Now we turn around back towards Coniston Launch and we see the large hill/mountain known as The Old Man of Coniston but in the books it is known as "Kanchenjunga". 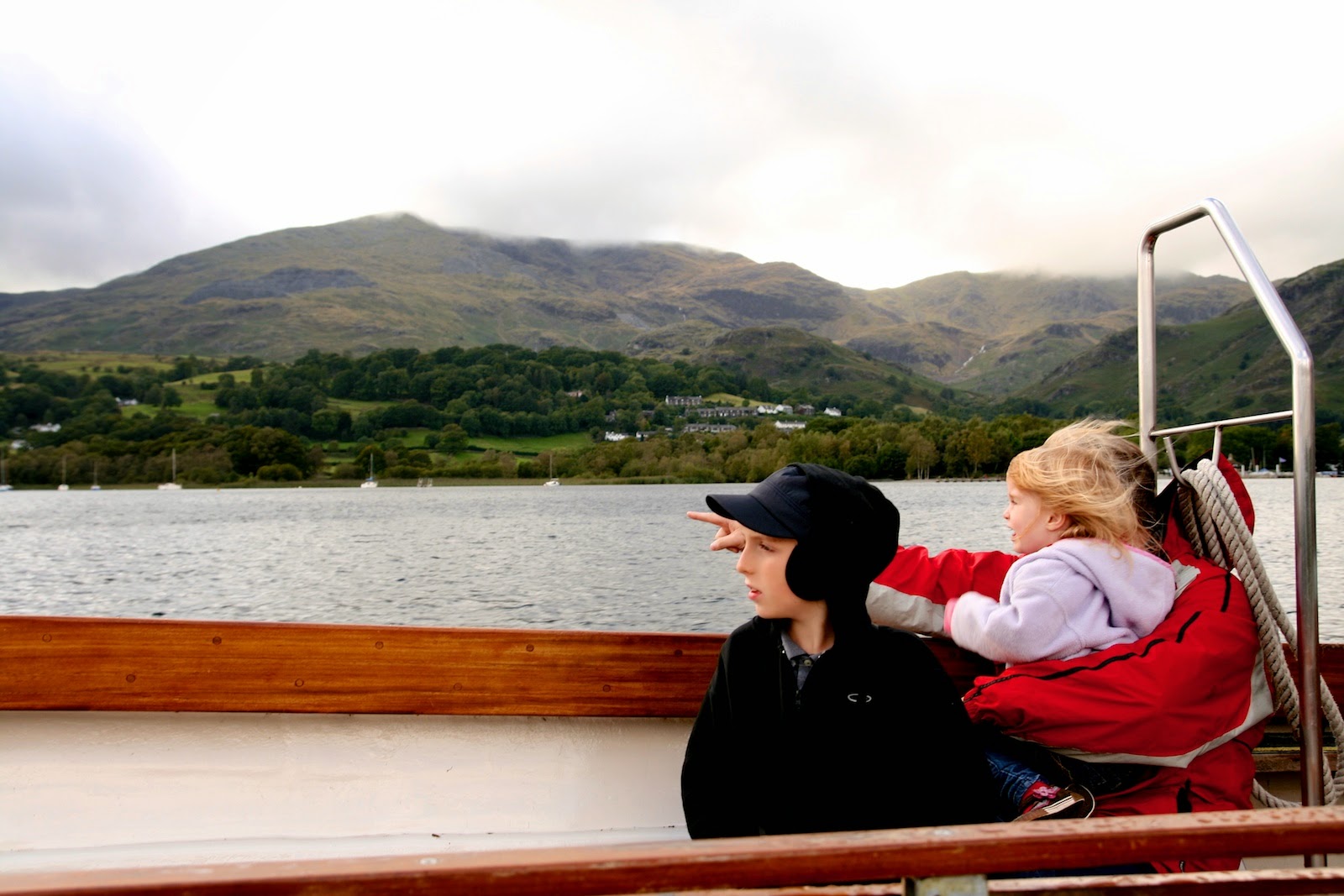 We continued sailing down the narrow lake and on the east side we passed a house called The Heald -- this is where Arthur Ransome wrote Picts and Martyrs and it is the forested country round about in which the story takes place. Certainly one of my favorites in the series. 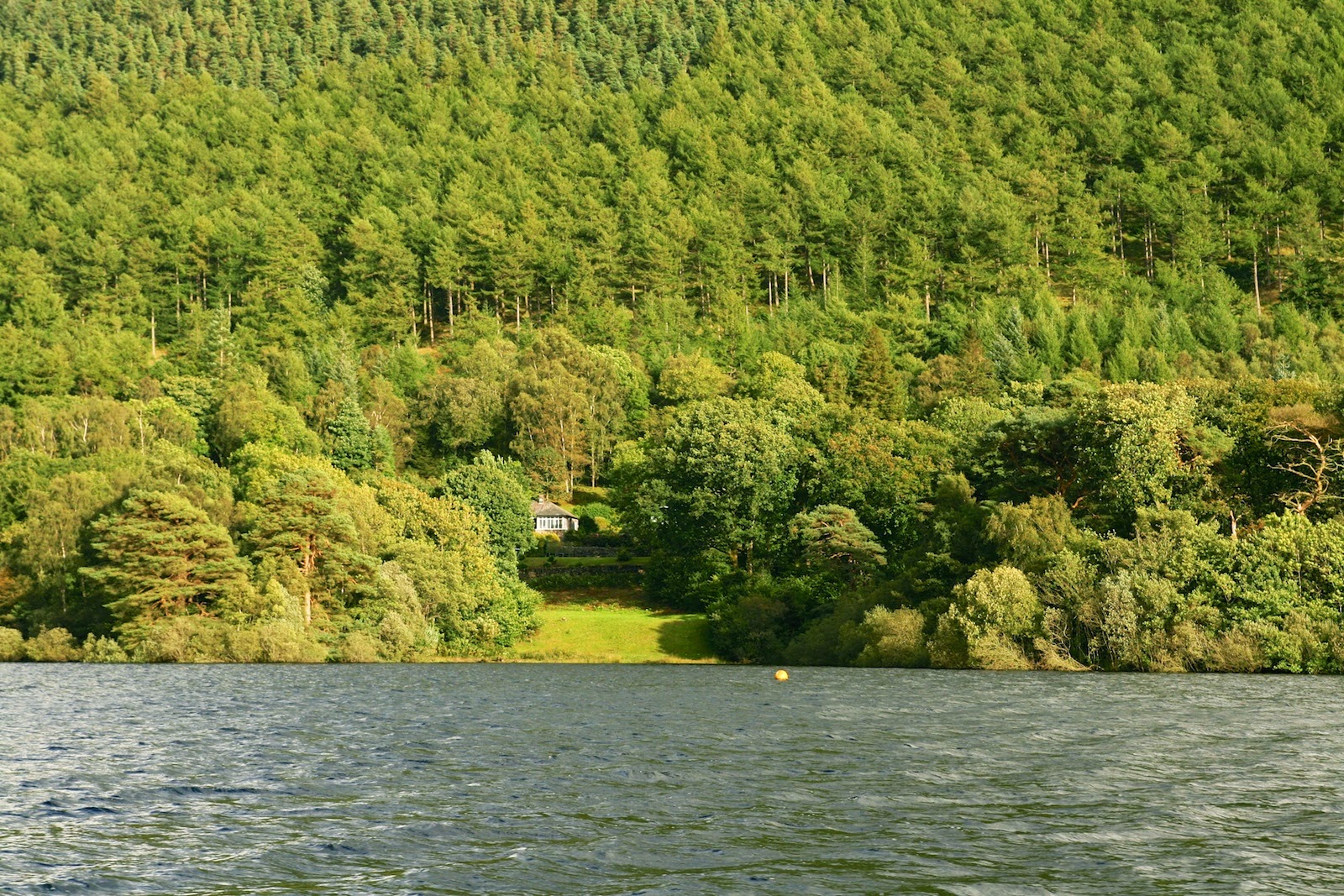 Our guide stopped part way through to give the kids some rope tying lessons. 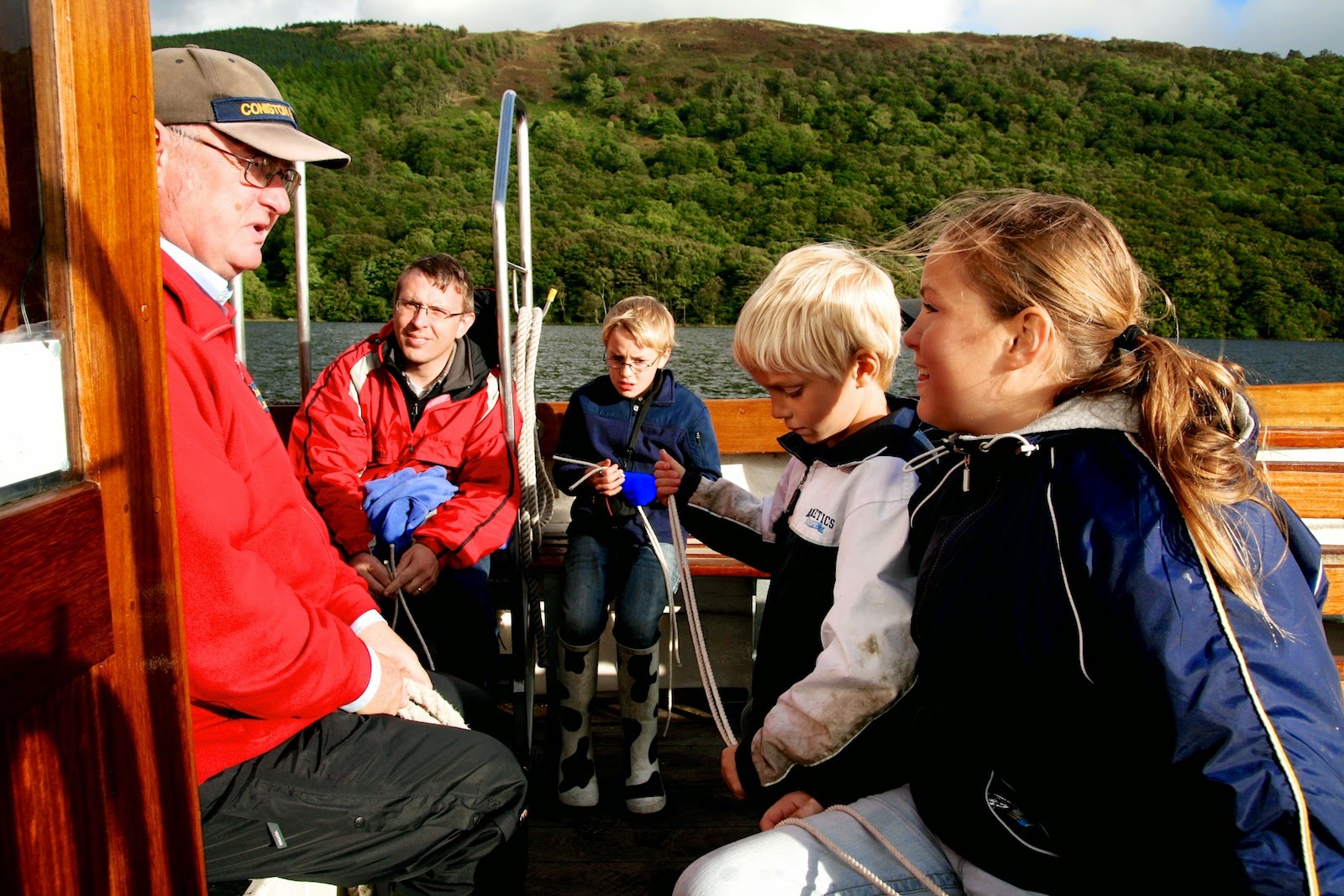 Everyone got a try: 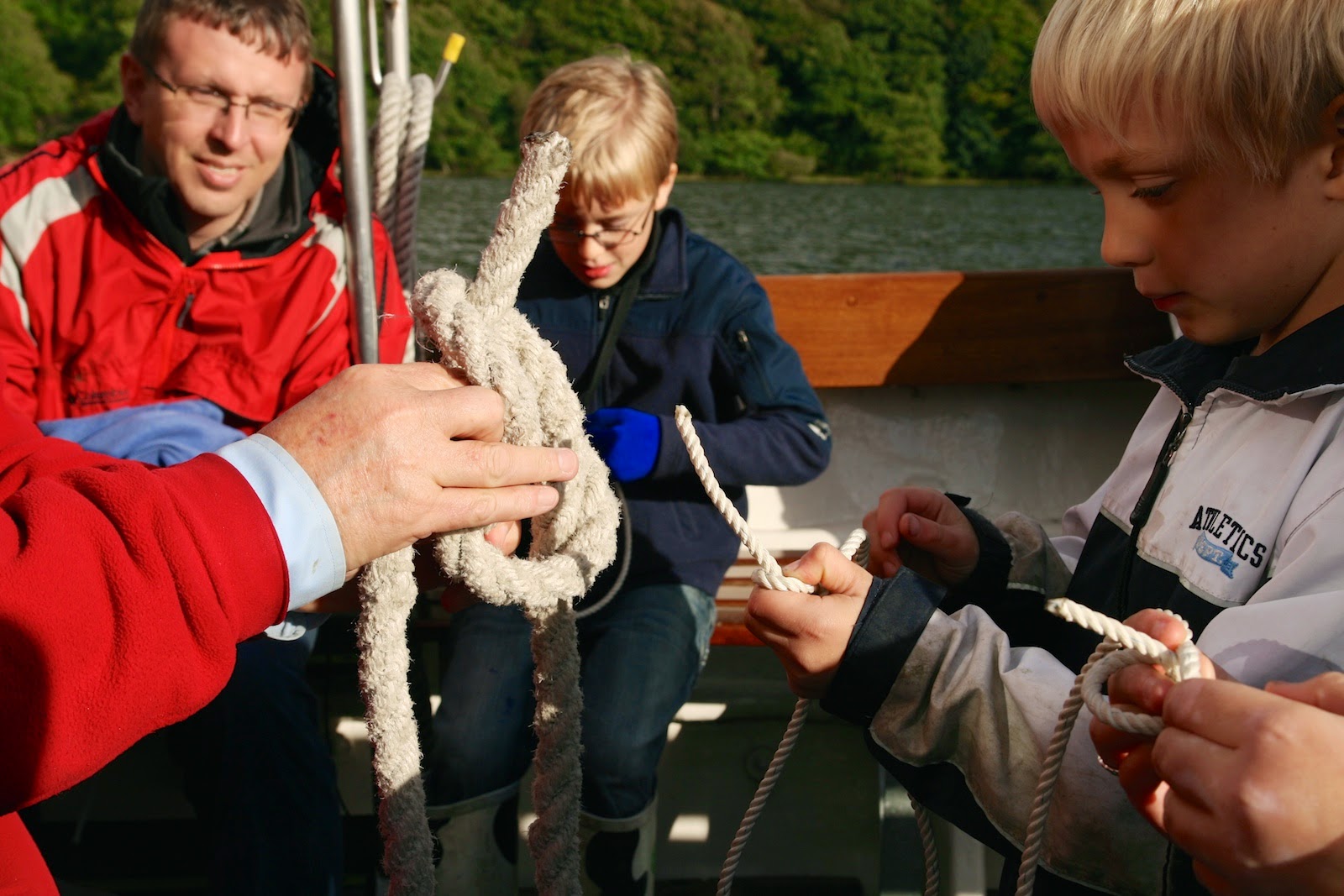 Then our guide reappeared in pirate's costume for the rest of the journey -- he knew all kinds of trivia about the books -- obviously because he loved the books, not just because this was his job. 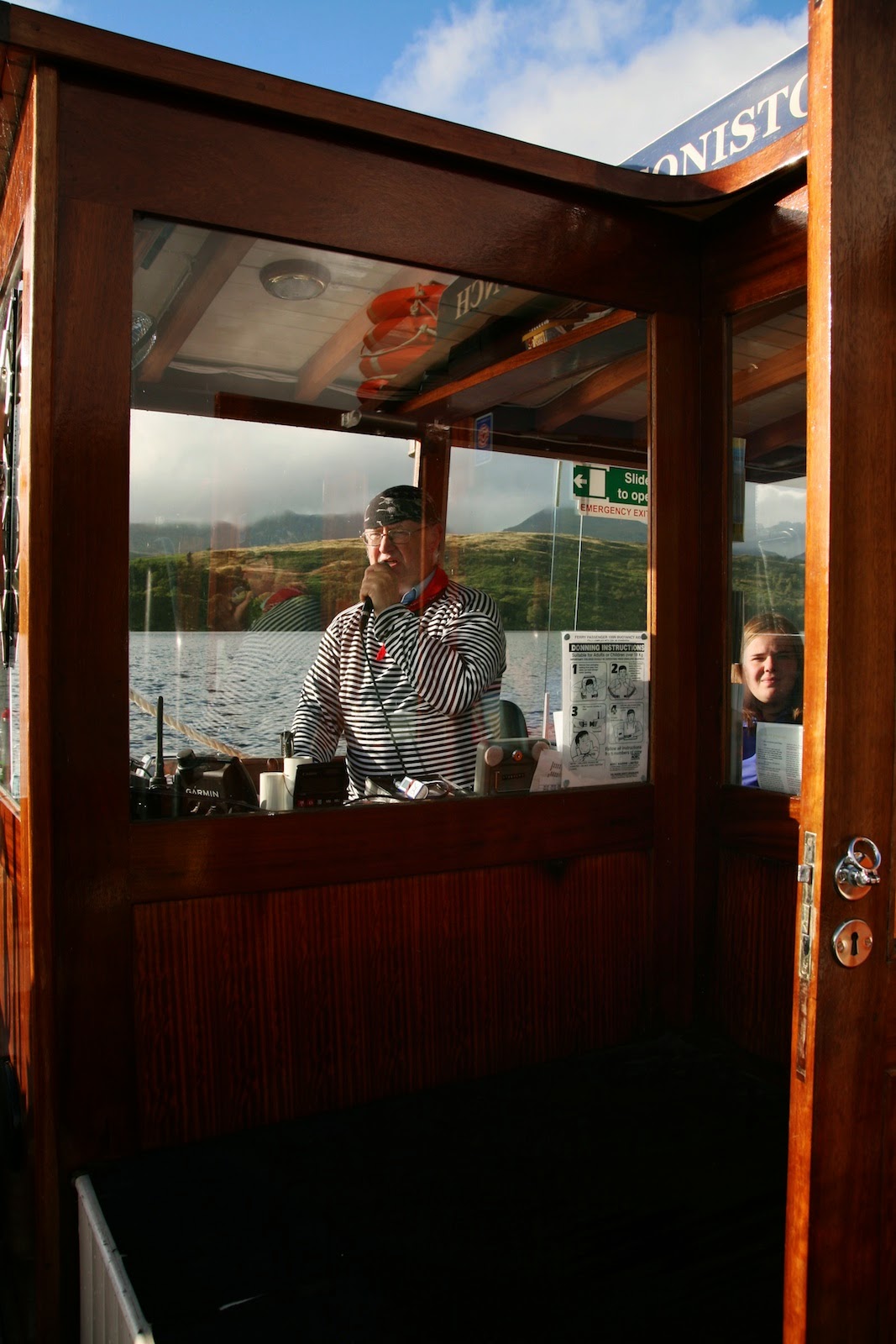 And now "Wild Cat Island" looms on the horizon. 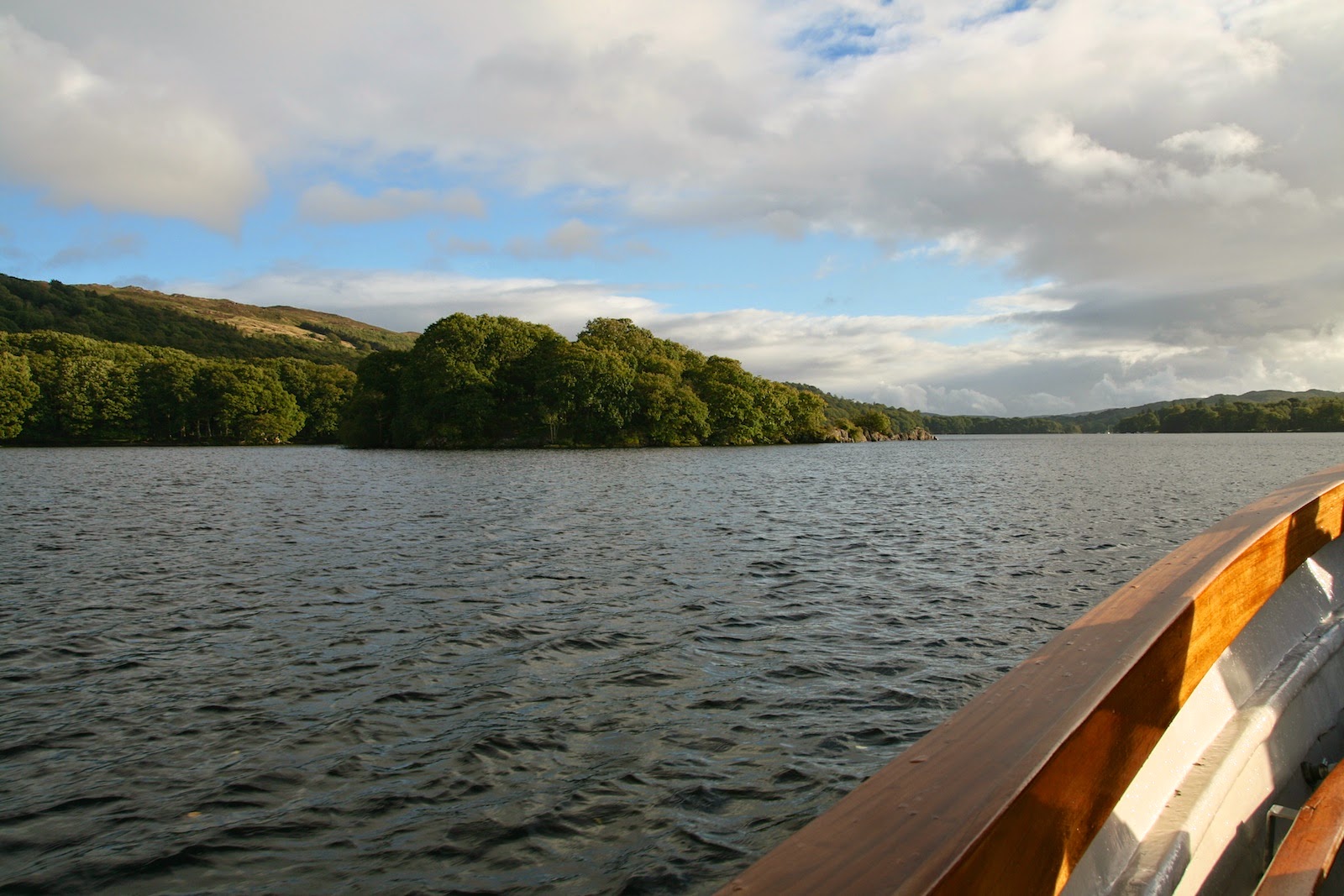 If you look closely you can see the fir tree that the Arthur Ransome society planted at the top of the island to mimic the books. In real life this island is known as Deel Island. 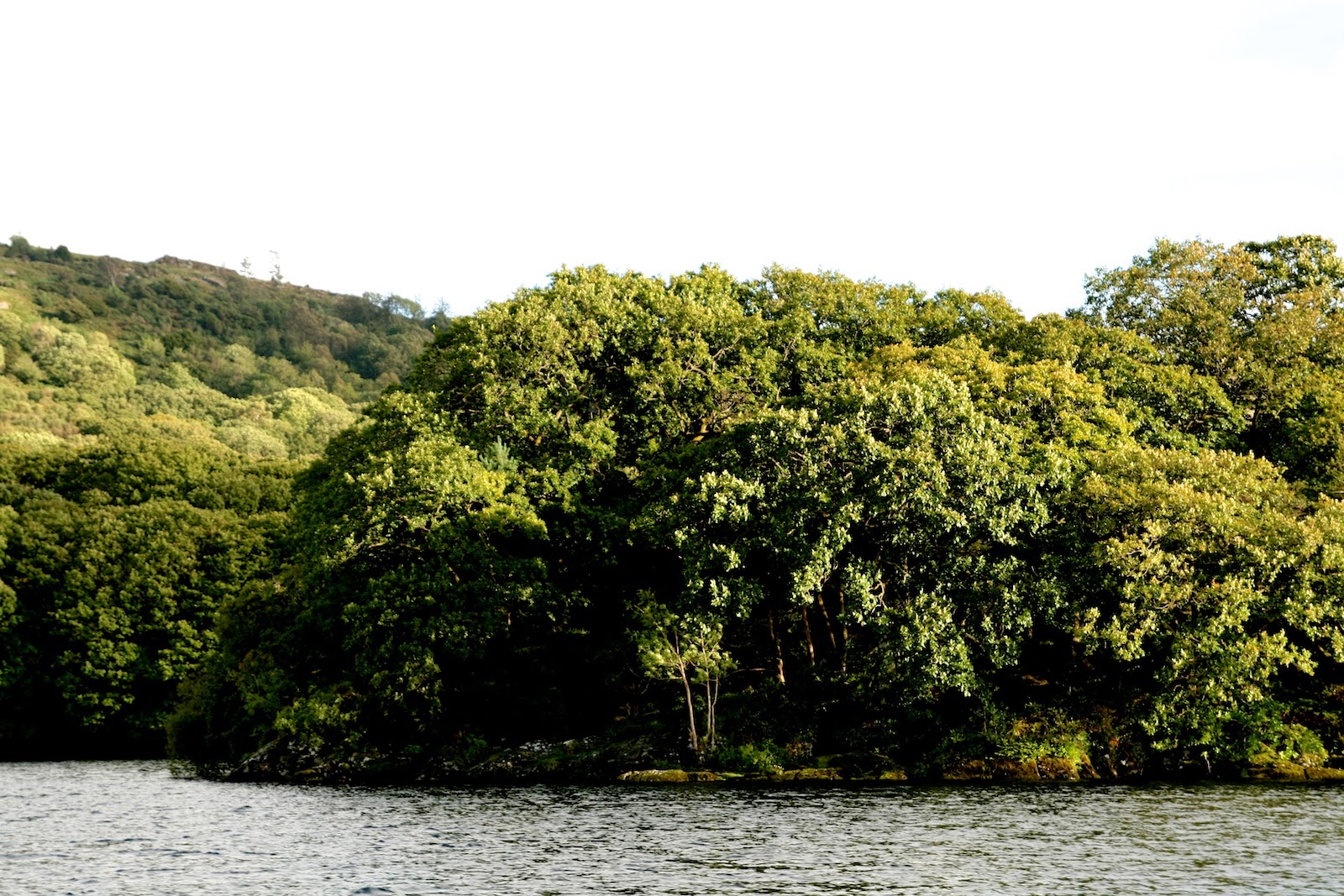 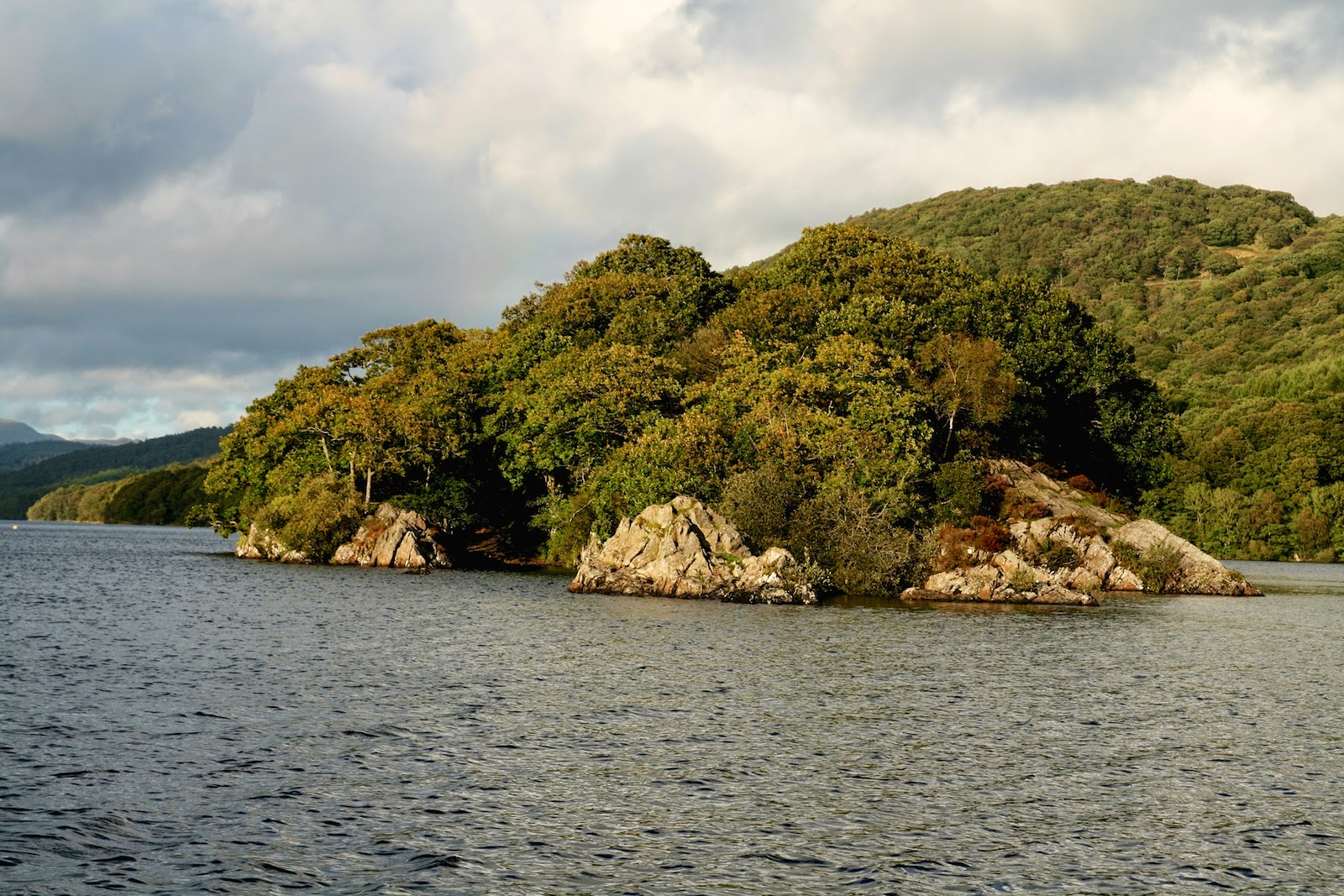 Across the lake is another house which is a possible contender for "Holly Howe" but has been ruled out for a number of reasons. I can't remember but this might have been the house used in one of the movies of Swallows and Amazons. 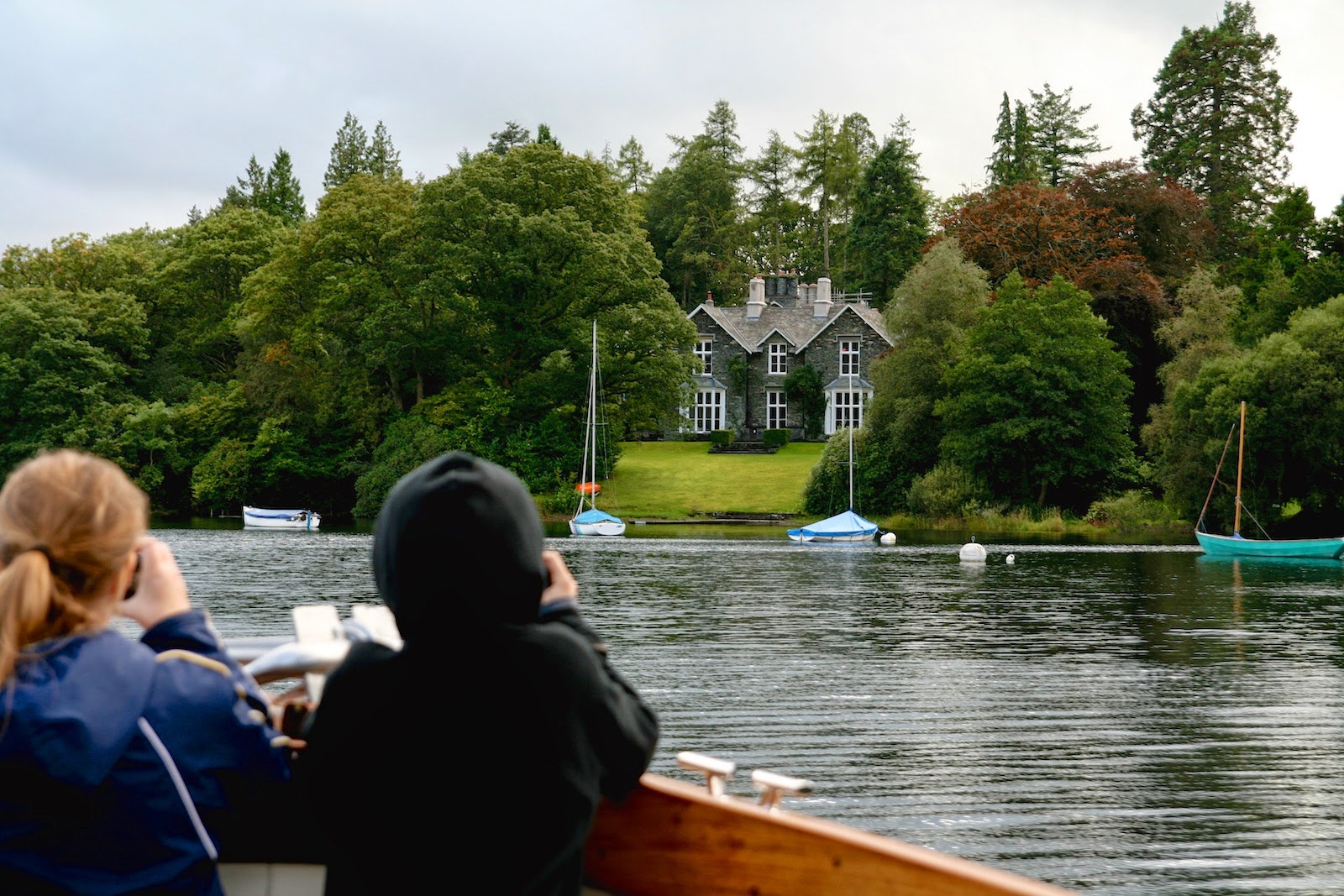 And now our boat is pointed to the south of the lake and the place where "River Amazon" flows out of the lake. 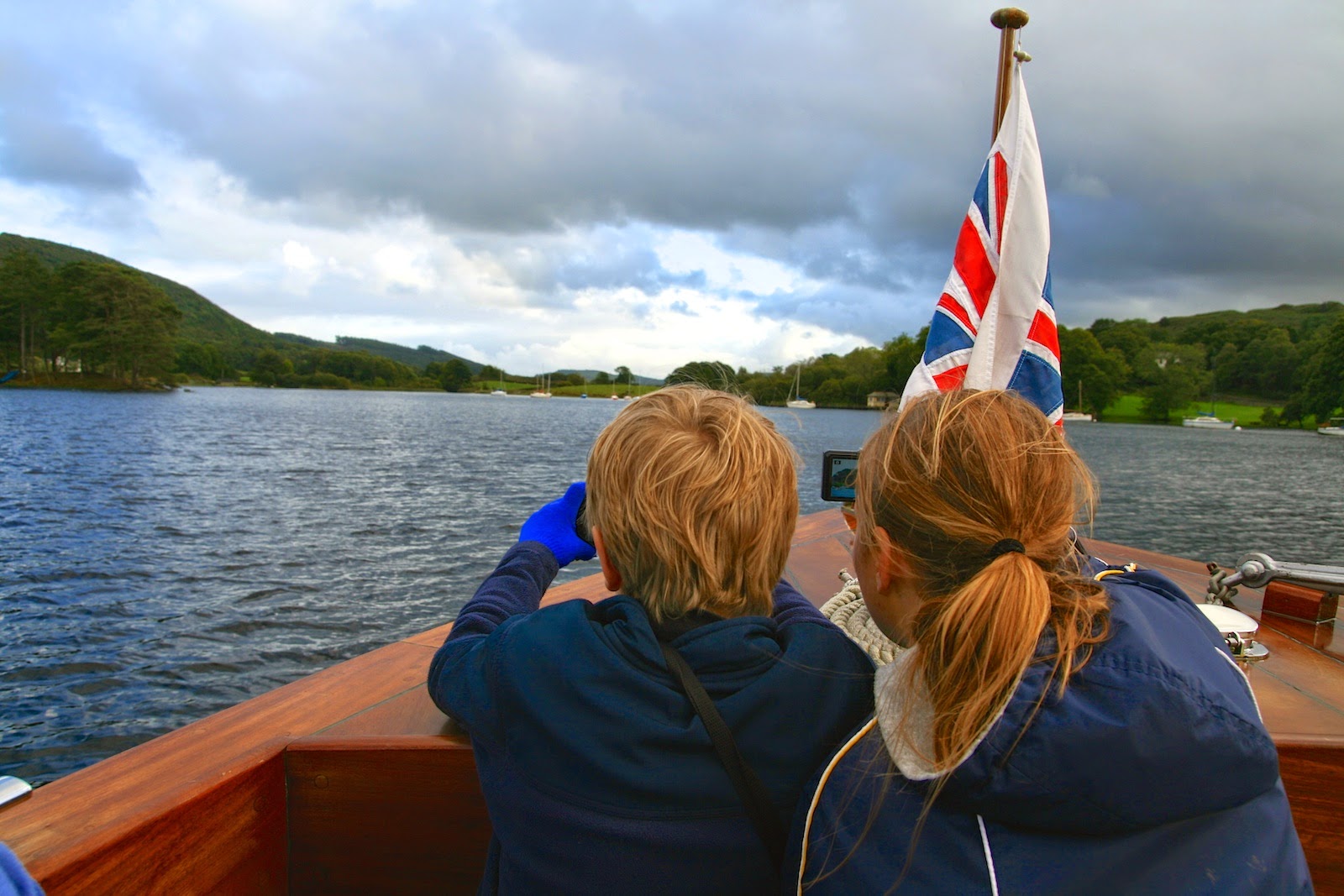 The map lists this as the Amazon Boathouse and Swainsons Farm: 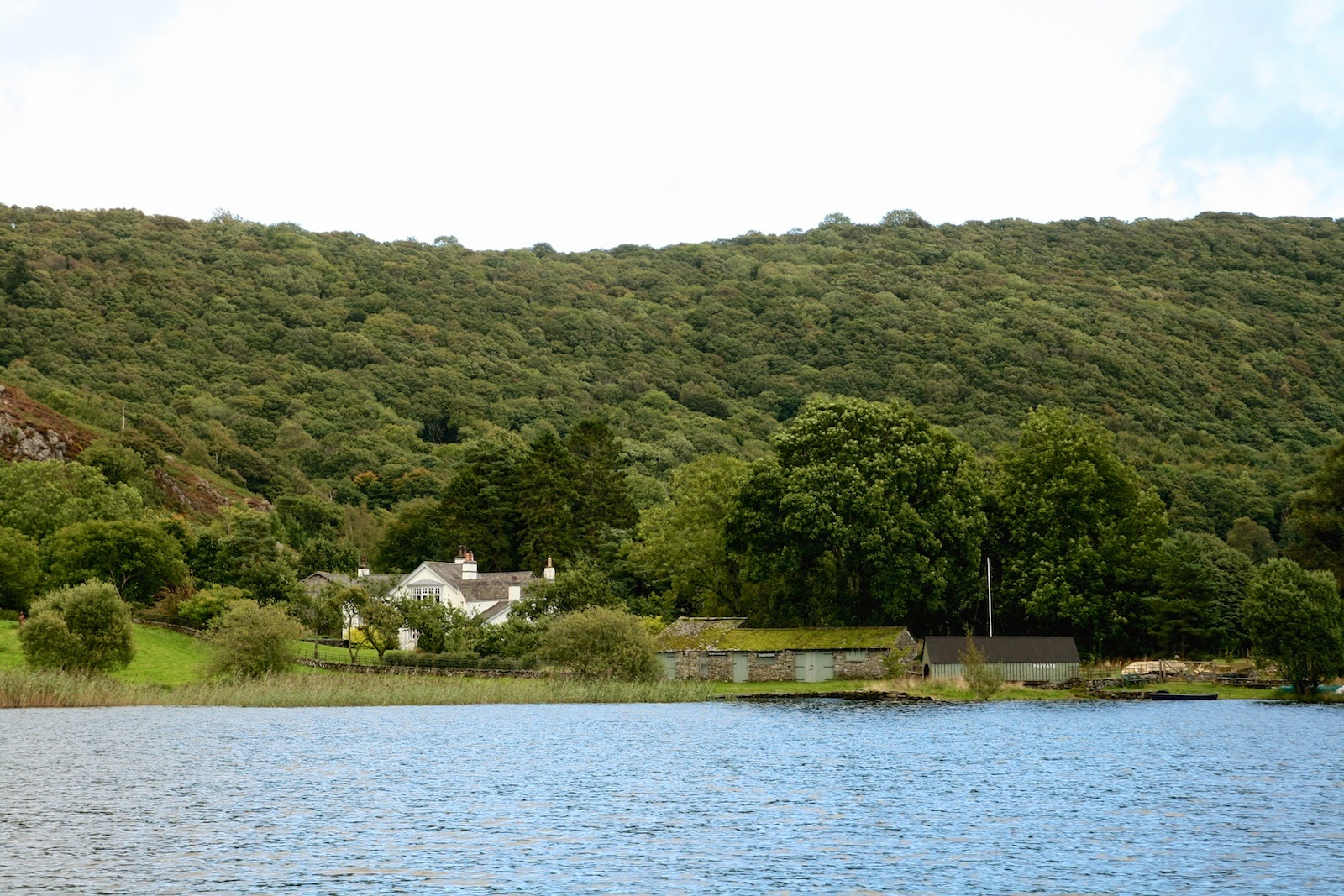 Another island which may be similar to "Cormorant Island". 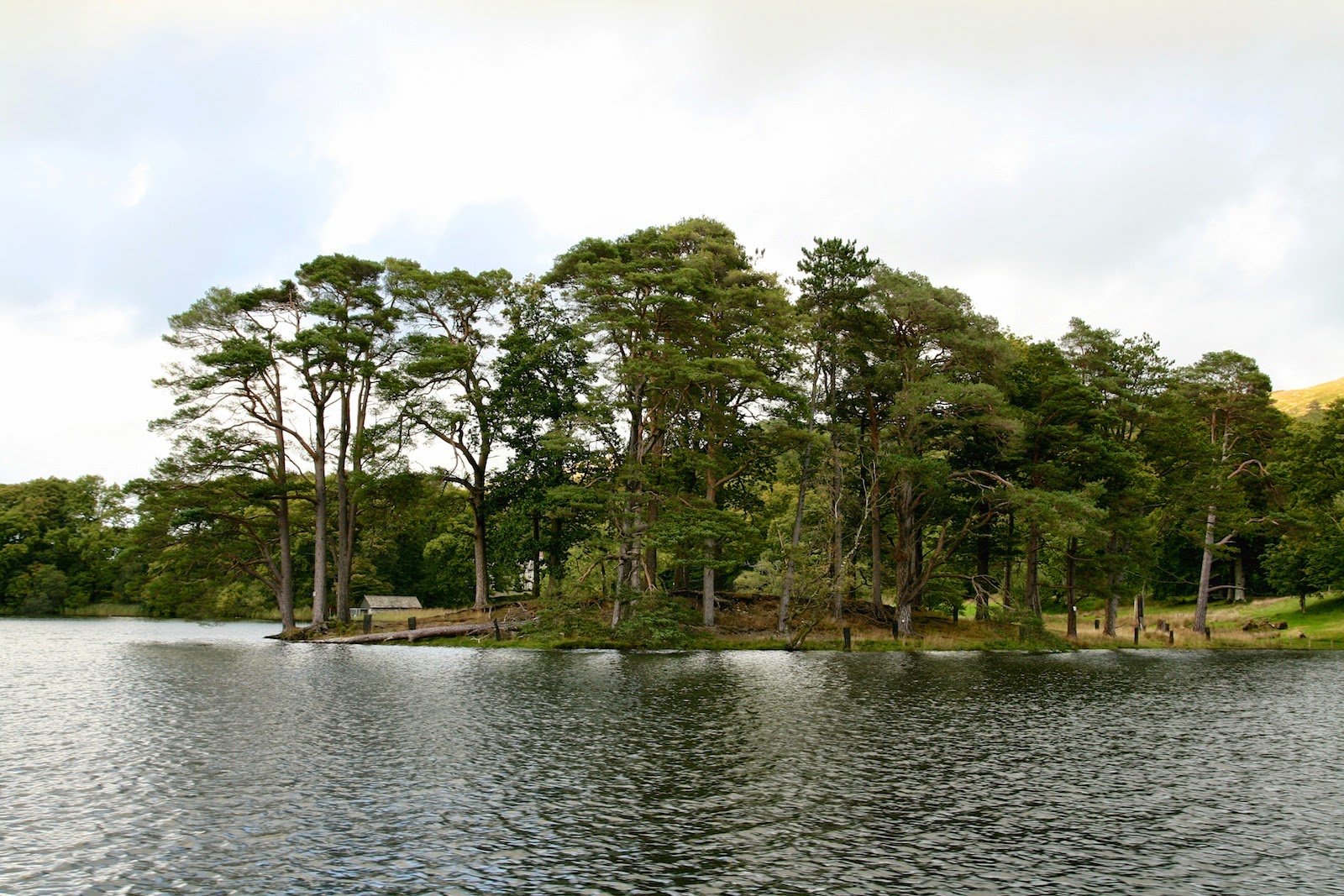 Now heading back up the lake we were greeted with a lovely rainbow. 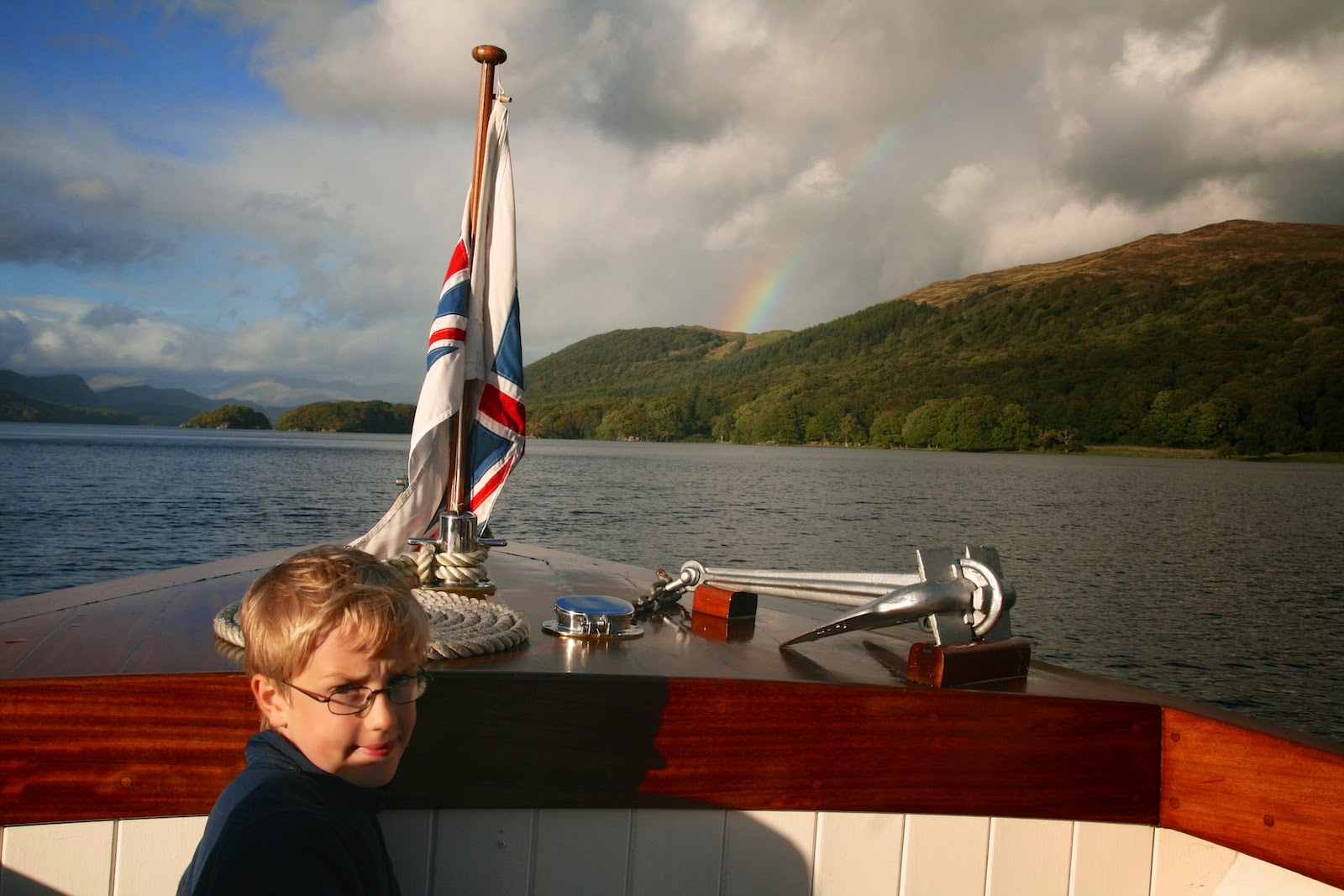 The beauty of the place is just indescribable. It's no wonder that so much outstanding literature and art flowed from this place. 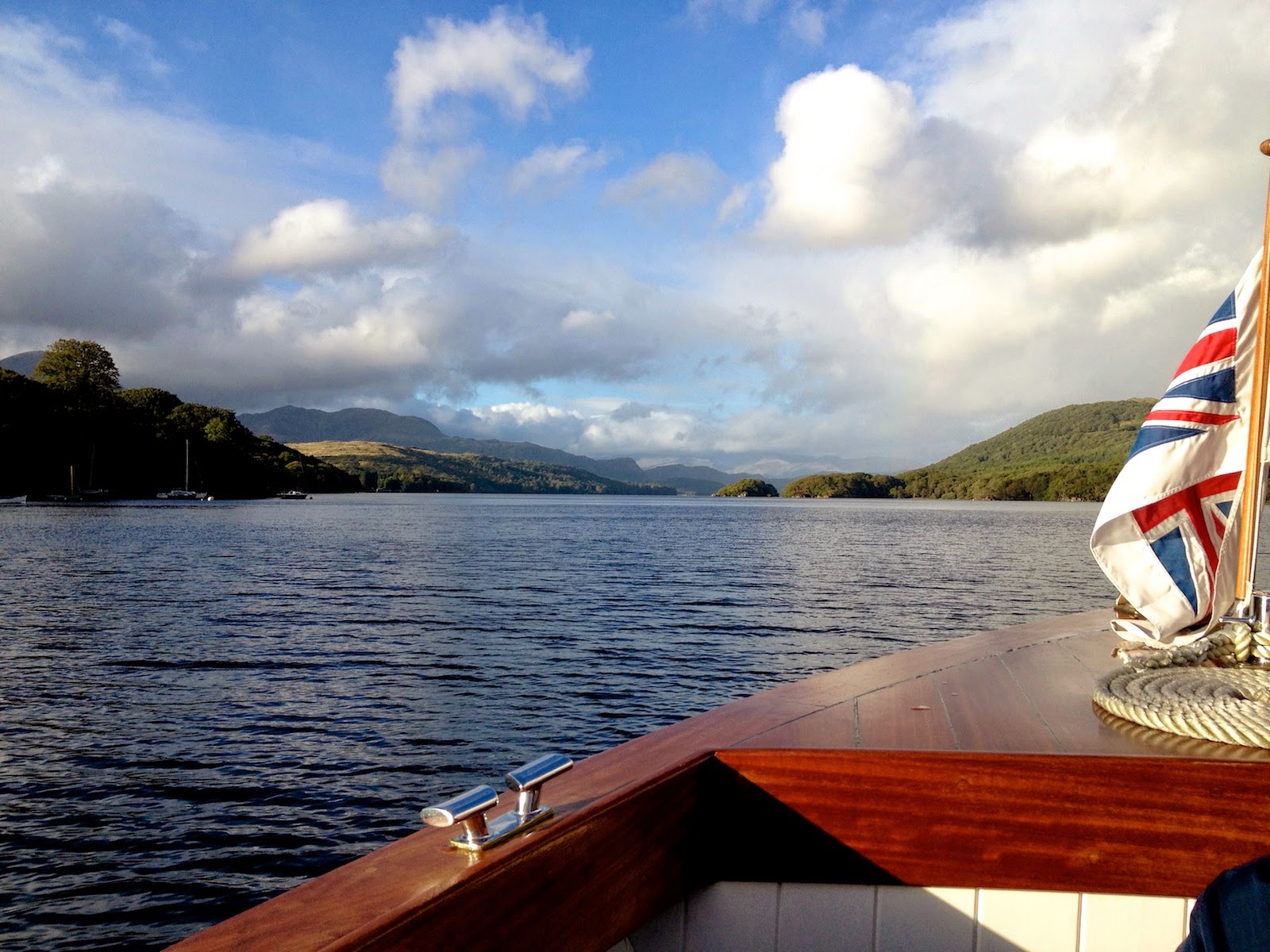 I did ask our guide if Arthur Ransome and Beatrix Potter would have known each other since they lived so close to each other and they both wrote children's books. But our guide doubted they would. Beatrix Potter was not known as an author so much as a landowner and sheep raiser. Perhaps her ownership of large tracts of land in this area was not broadcasted around.

Our guide let David help steer us back home. It was certainly one of the best and most enjoyable boat tours and it was so very perfect for our family. Now I want to read all the books all over again. I think Swallows and Amazons is for our family what Anne of Green Gables was for mine growing up. 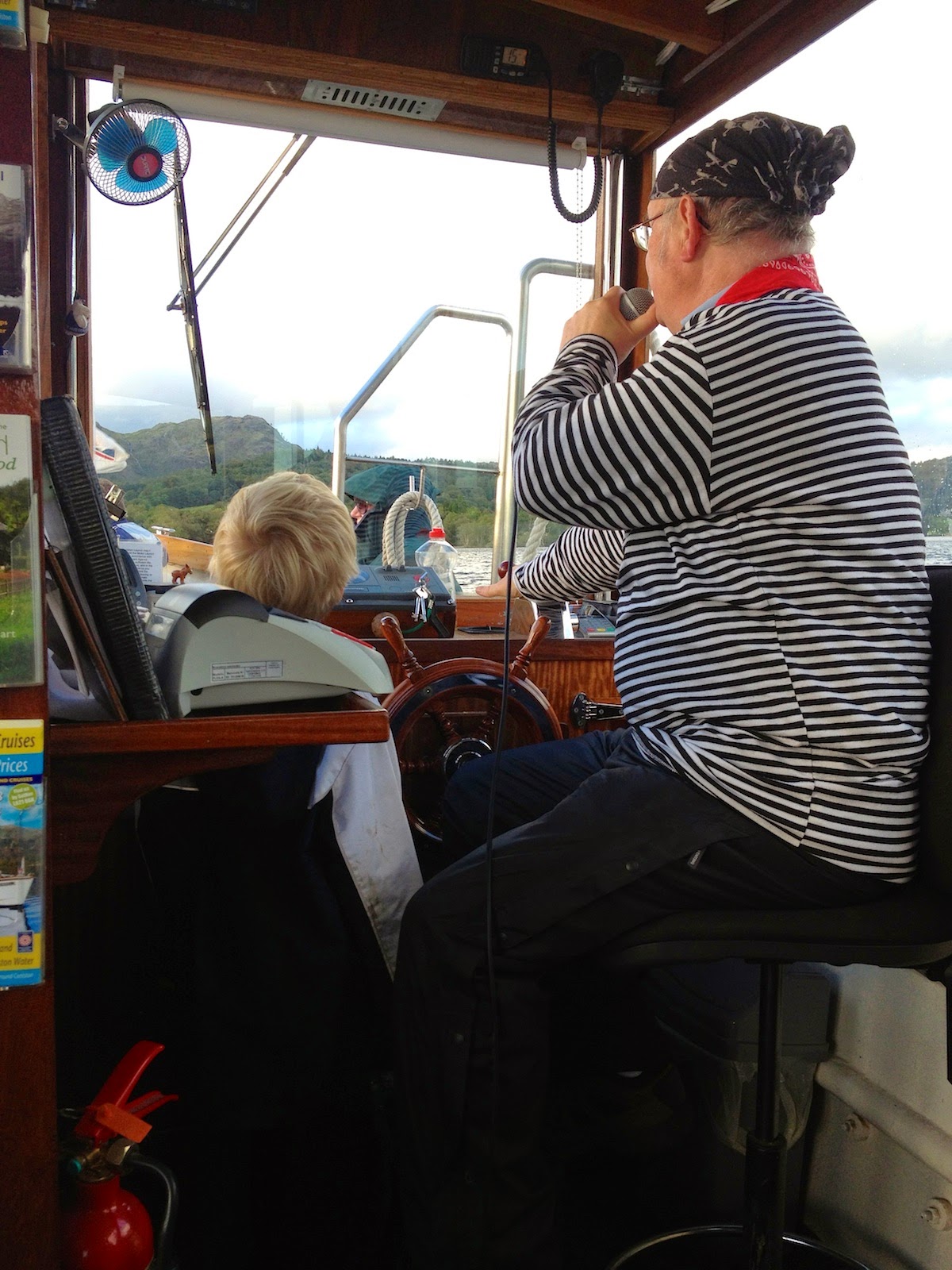 Now, the only thing we had missed of great importance was seeing the Amazon boat herself. We intended to visit her on our day in Windermere but then found out too late she had been moved temporarily to Coniston! So, we gave up on seeing Amazon but on our last day Michael decided we should detour back to Coniston and finish what we had set out to see.

So, we drove all the way to Coniston (which was quite a short distance really, but the tiny roads make for a long journey) and pulled up in front of the museum. It was still open! So we parked our car and headed back only to find the museum closed! Help!? Surely we couldn't come this close to seeing our beloved boat? We looked in the windows and spied a man at the counter and knocked hopefully on the door. He was so kind and let us all in to see the boat!

So here she is after all! 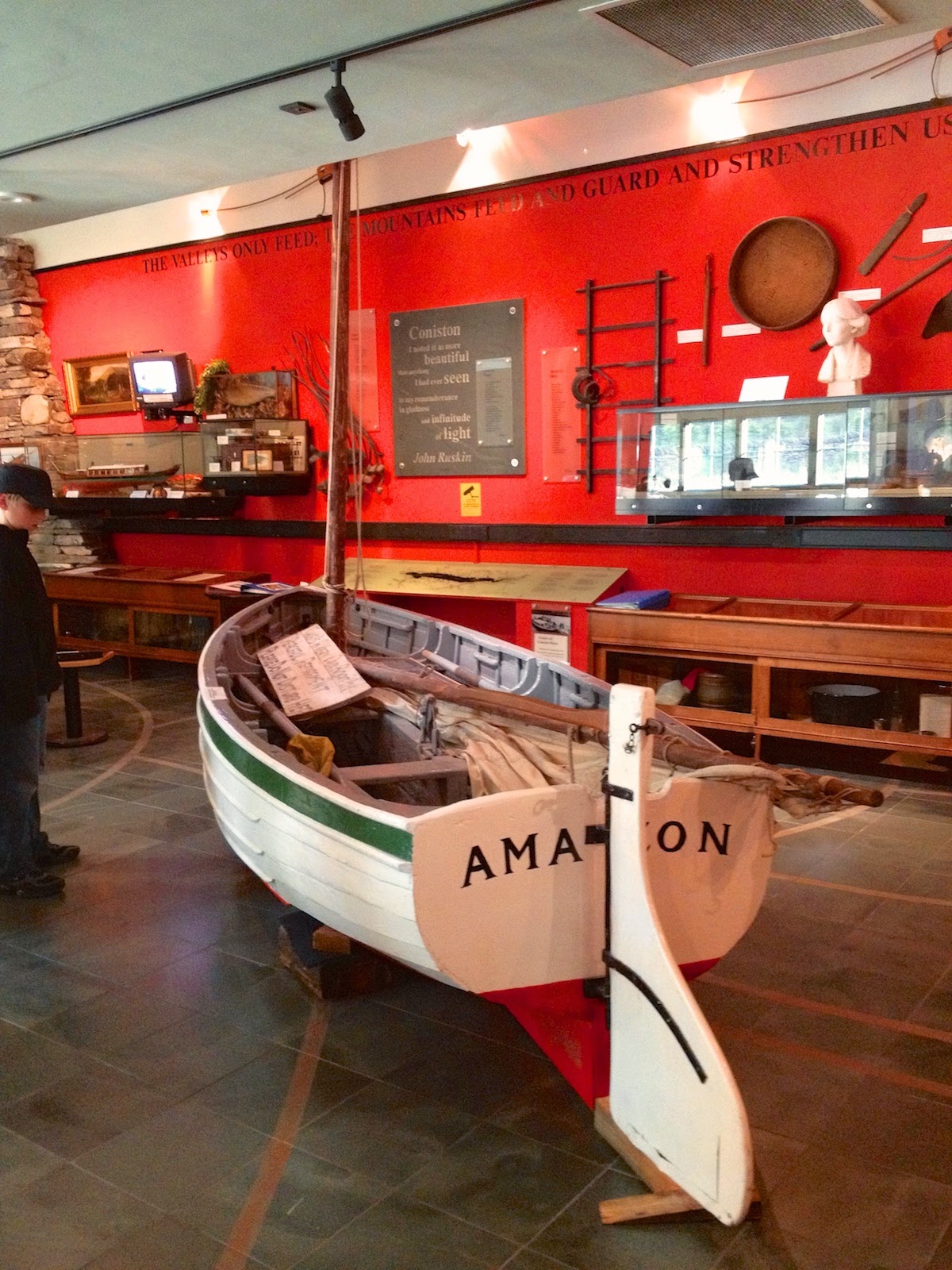 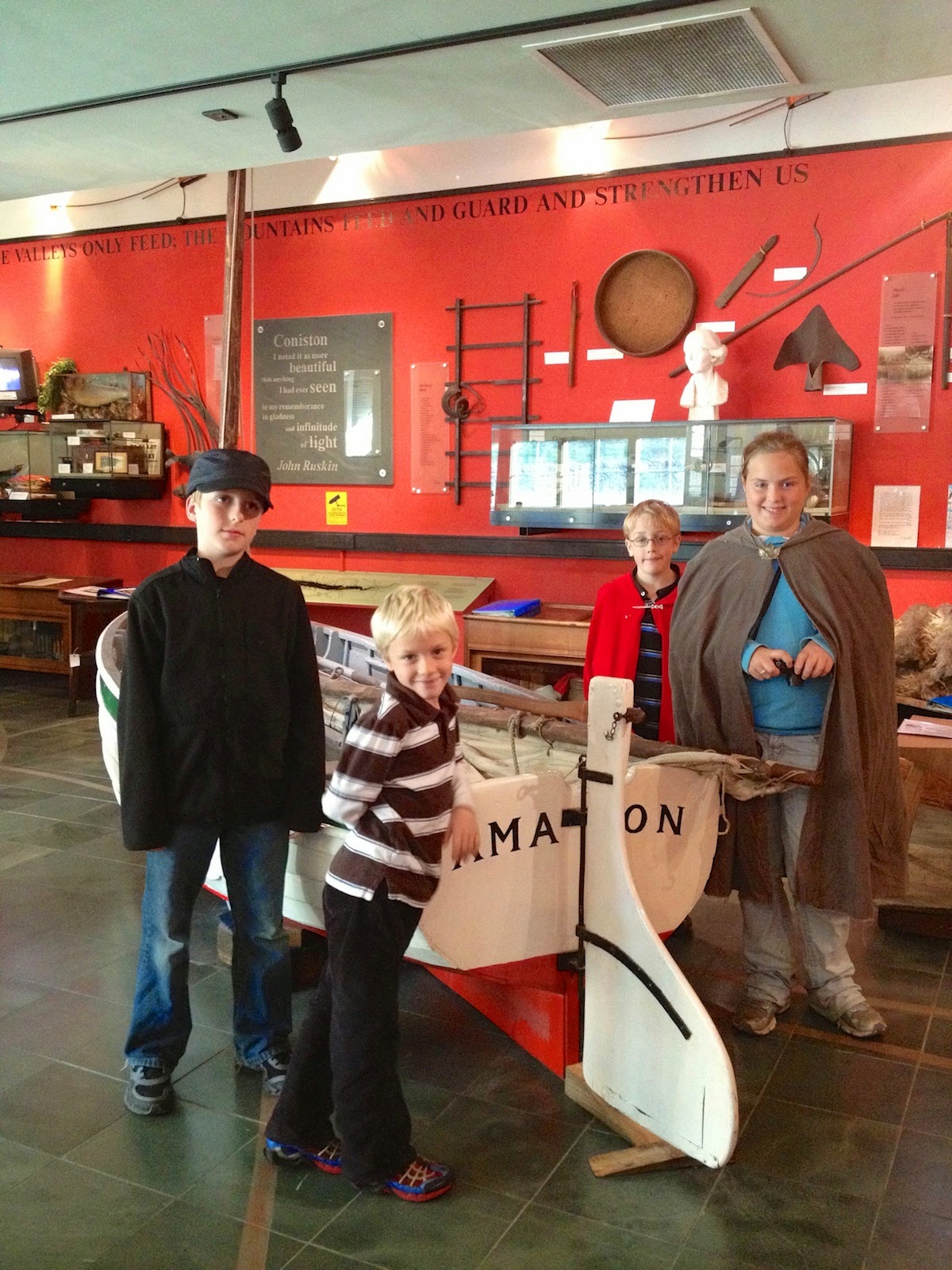 Ransome did base his stories on real children who really played in these parts of the country and really had boats like this. 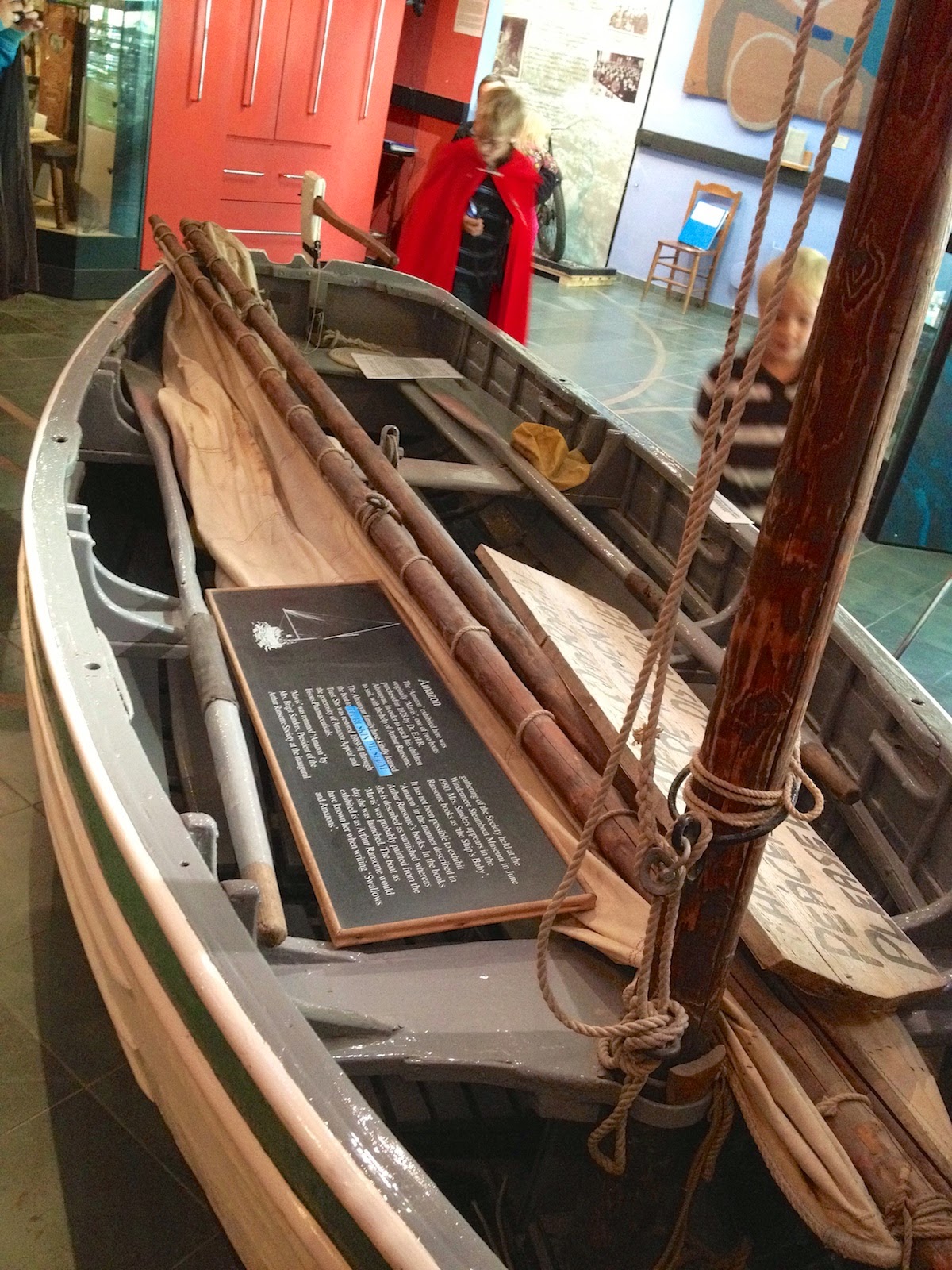 And there were plenty of books for sale about Arthur Ransome, as well as the map we came home with. 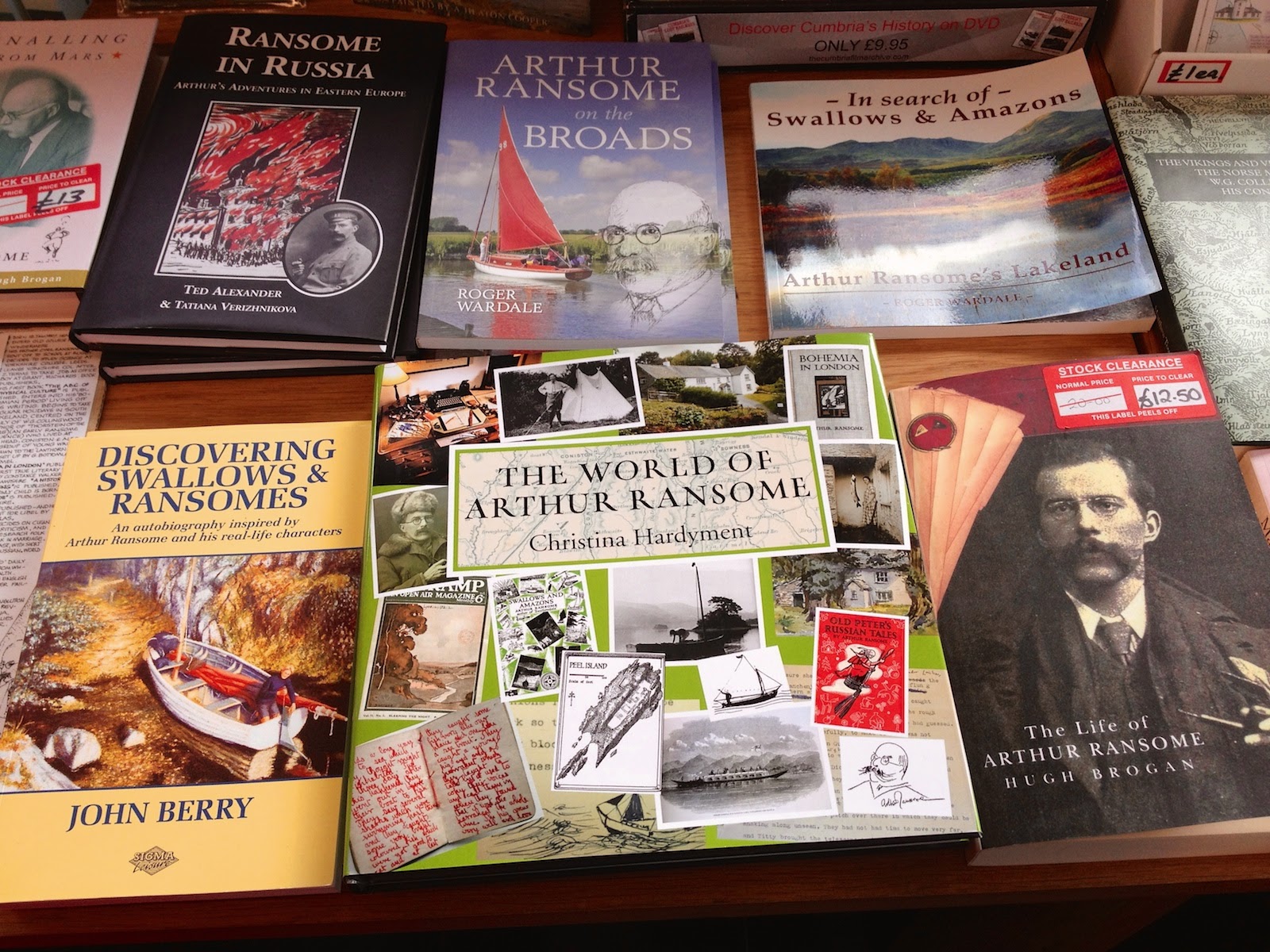 And when the kids got back to the cottage they rummaged in the barn and came up with their own sailing craft. :) 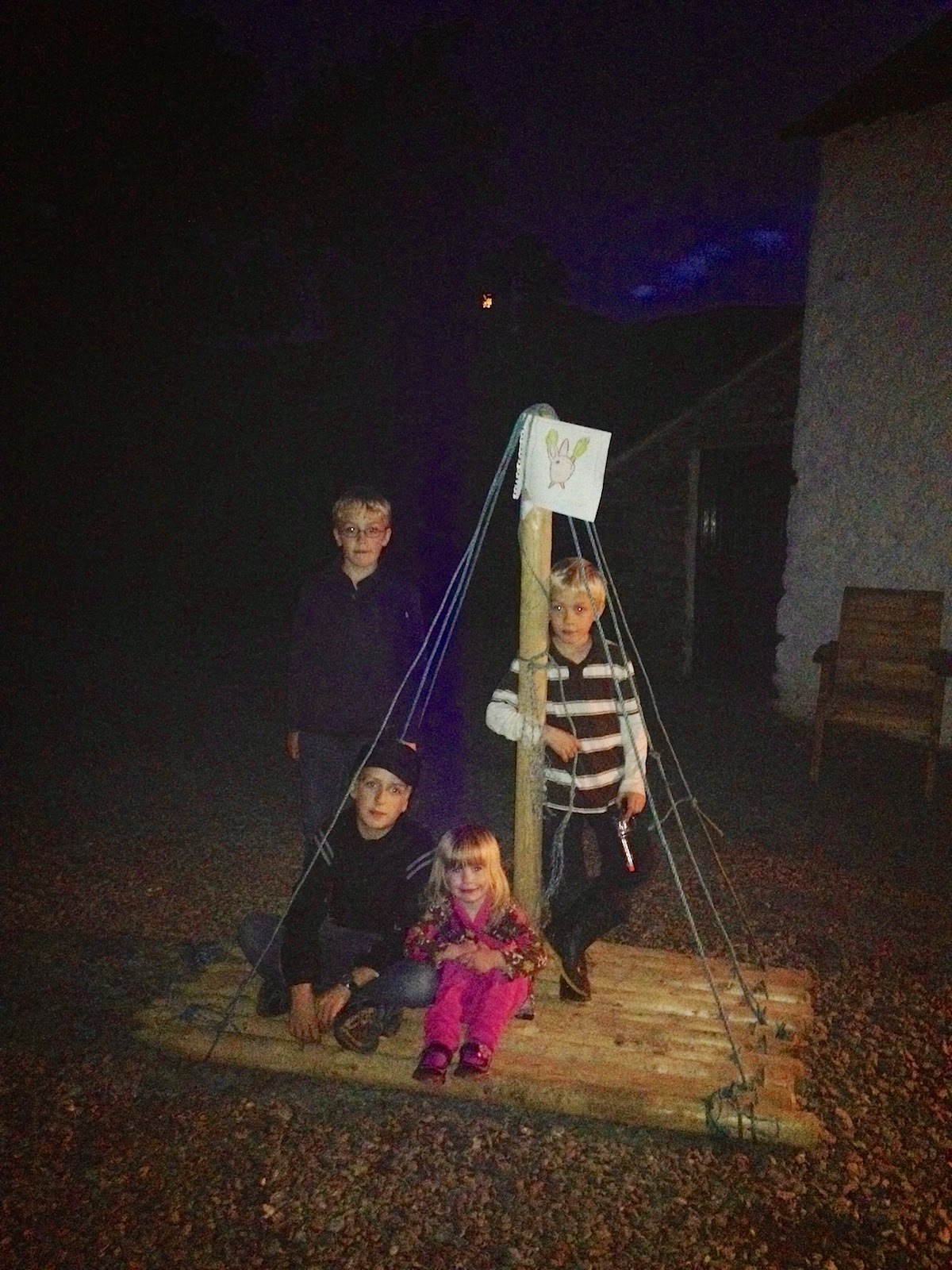 And that is our Swallows and Amazons adventure! Next up will be Beatrix Potter and Wray Castle.
Posted by Heather LeFebvre at 5:42 PM

How absolutely fantastic! That sounds like the kind of experience your children will always treasure. Wonderful capes they had on, too!

Oh oh oh! So amazing to see it all. Just lovely. LOVED this post. Now I want to go and read them all again, too.

So fun! My kids and I loved looking at the pictures, and we were surprised to see how small the boats were! We had imagined them being much larger when we read the books (we've only read the first two so far).

What memories! Your children are so blessed!
You're pictures are lovely. You're good with details!

What a wonderful family adventure! You will all hold these memories close at heart forever. I dream of visiting The Lake District and look forward to reading your Beatrix Potter post! ♡

Just found your blog via the Yarn Along and stopped to have a look. Lovely pictures of your trip - we stayed at Bank Ground Farm once, for a couple of nights, years ago, when we only had one little one (now, with 3 boisterous lads I don't think I'd dare - although the cottages might be more possible...). It's beautiful there and you can really imagine it as inspiration for Swallows & Amazons.