Life on the Home Front: The First Day of Spring 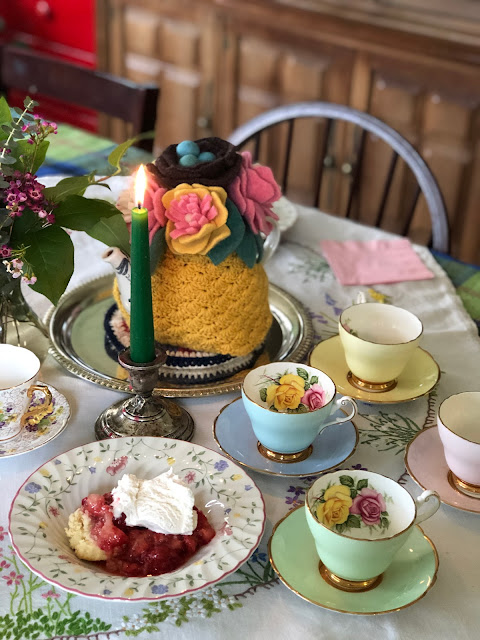 In which I discuss the first day of Spring, monitoring the butter situation, and the nearly exploding refrigerator...

I was reminded by Ann Kroeker earlier this week that this is a very important time to be recording what daily life looks like as life as we knew it rapidly changes into a new era. It didn't take much encouragement for me to return here.

We are a week into life at home, one week into the three weeks of groceries I bought last Thursday, one week into at least seven weeks of the kids being home from school (I'm guessing this will change to be longer.)

Everything is surreal. We are all hiding at home, waiting for the tidal wave to hit, wondering who will  get sick, who will be the first one, not wanting to even ask "who won't make it." Is this how it felt on the home front during Word War II?

I spent years reading books about World War II, interviewing friend after friend about their actual war-time experiences when we lived in Scotland, and watching my mom and other missionary wives live life in post-war Uganda in the early 90's. All that knowledge is rushing to the front of my mind as if it was there for a reason.

So it's not the toilet paper I'm worried about: it's the butter. It's hard to be excited about food when there's no butter! I have a limited diet: no gluten, no dairy (except butter), no nightshades (potatoes, tomatoes, eggplant, or peppers), no fermented foods or foods with vinegar, and the list goes on. Butter is important to me! And my family eats it at an enormous rate. It might be the first thing we have to break out for. I have 9 pounds left. At our current rate, that equals a little over two weeks. Why so much butter?

We've instituted afternoon tea times with a mandatory sign-up sheet for baking. Even Michael has been assigned a day this week (he doesn't bake -- I think he baked four loaves of bread before he left home as a teenager just so his mom could be assured he wouldn't starve). The tea time is to provide an activity for the afternoon that will improve our spirits and foster social interaction in the family. It's also requiring a lot of butter.....

We had our traditional First Day of Spring Tea yesterday, something I started the very first year we were married. I started so many traditions early on in our family's life because I was often stuck at home with little children or chronic illness, lived in situations with few opportunities to see people, and wanted to bring up the mood of the family. As life has gotten busier, these little traditions have become harder to keep, and probably not as necessary many years. Suddenly, there's time and the need for the traditions. So we pulled out and ironed the linen tablecloth I found in Scotland 18 years ago with the first spring flowers on it (the snowdrops, bluebells, daffodils) and we even pulled out the spring teacups. We found an old, half-used bag of frozen strawberries in the freezer (fresh strawberries are the tradition for this day), and Laura helped to whip up a batch of gluten free scones to make strawberry shortcake.

I am encouraging each one of us in our family to find some small way to encourage others during this time. Laura has made an extensive list of people she can create cards and letters for. Drew and I are working on creating nature videos so no one has to miss the first glimpses of spring. James agreed to play his bagpipes out back for a few minutes on St. Patrick's Day. It turns out a few people heard him, including someone who was missing her father who had passed away a few years earlier and who loved St. Patrick's Day. All this was learned from a friend who found it chronicled on the NextDoor App. James is planning to play again. Anything, no matter how small, is important right now -- important for building camaraderie, keeping everyone's spirits up, keeping an outward focus and keeping love alive in our own hearts.

I've also made a list of household chores we've been putting off far too long. Things like reorganizing closets, cleaning out cupboards, and cleaning up dried ice-cream underneath the fridge. All was going well until we heard scary sounds last night and a son yelling, "The refrigerator is exploding! Dad! Help!" along with the accompanying sounds of water spraying at a great rate from the kitchen. Moving the refrigerator had caused the water hose to pop off the wall and pressurized water to begin flooding the kitchen. "The water shut-off in the pantry!" yelled Michael. Drew and I ran in and turned the water handle 1/4 inch each way. Nothing happened. "It's in there, keep trying!" yelled Michael with his fingers pressed hard against the opening of the hose. I handed Drew a dainty china teapot blocking one side of the water pipe, threw a bunch of extra kitchen towels on the floor, and vowed to clean the small pantry as soon as possible. Finally, underneath, there was an actual valve handle, and with a great tug, the water was off. That led to shop vaccing up all the water and a trip for Michael out "into the apocalypse" to get a brand new hose from Lowes. By bedtime all was well, the floor shiny clean, the fridge replaced, and the drama of the day done.

Food eaten: tomato soup and old bread turned into garlic toast for most of the family for lunch; turkey soup for dinner along with bread I'd picked up at Wildwood Market while making flower bouquets on Wednesday. I think breakfast was toast. And we did have strawberry shortcake for afternoon tea.

PS: I've put a "Follow by Email" link at the top left of the blog in case you want to receive these posts in your email inbox.
Posted by Heather LeFebvre at 12:20 PM

Hello Heather,
Lovely to read this post. I have been thinking along the same lines and will try to post again on my blog- I posted yesterday for the first time in months.
It will be good to create a record of the days and weeks to come and also to connect online while we are spending most of the time in our homes.
Hope you all stay well.

Oh my friend, what an encouraging post! Today it's the 1st week of my kids's confinement (hubby and I have been out once) and one of them had tears of frustration and sadness for not being able to visit dear friends. I wanted to cry along! Knowing you are bearing the confinement with beautiful traditions at home gives me hope!