Life on the Home Front: First Full Day of Lockdown 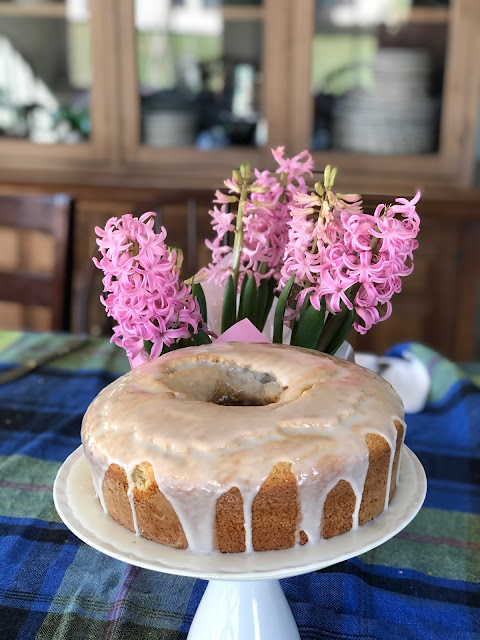 In which I discuss Prince Charles, cake, and alien movies....

The first thing that I heard Wednesday morning was that Prince Charles had tested positive for the virus. That's just a little too close to the Queen for me! I am a very avid follower of the Royal Family. We grew up with an old book about the princesses (the Queen as a child) and a dollhouse they played with, then we lived in Uganda, a former colony of Britain, then two of my children were born in the UK, and of course two of my great-grandparents were also born there. It's inevitable that I be a royalist. I'm glad the Prince is not hospitalized and that he and Camilla are isolating way up in Scotland in a "cottage."

Sunshine today! I took a walk early afternoon to grab more footage for my nature videos. A neighbor was out moving flowers around in his flowerbed and promised to send me a bucket of daffodils he'd divided along with yellow lilies. I don't think I've ever seen so many people out walking in our neighborhood! Must be the new national past-time. People are more willing to say hello too. I found plenty of progress in the woods to report on -- lots of flowers making their way to the surface and a few actually blooming. Especially exciting was finding the ramps (wild garlic) poking up through the leaves.

Today was the first day when we actually knew someone who tested positive for the virus -- relatives in Connecticut. And friends in Rhode Island most likely have the virus too. And my friend in NYC continues to give me firsthand reports. Life there is very stressful, far more stressful than here. When someone you know gets the virus, that's when it all becomes real.

A friend shared a picture of her Glazed Donut Cake on Facebook and I thought it would be perfect to try for tea-time. James attempted a gluten-free version of it for us and it was SO delicious! How have we not known about this cake before??? The recipe we used is here. We used GF flour and xanthan gum and made buttermilk with milk and vinegar.

I started to putter in the garden -- mostly because I needed to deal with the plants I was given. After my long walk, and with a bike ride ahead (with Laura) I didn't want to do too much and over-do. I did find rhubarb coming up! YAY! Last year I planted some again to see if I could get it going. My attempts over the years have eventually failed.

I managed to get our linen closet re-organized. What a relief. So many more things to do like that. One at a time. The kids get the easy job: I ask them to pull everything out of the space I'm going to organize. I get the hard job of sorting and putting it back.

It was David's night to pick a movie, I think? Anyway, the movie was about humans fighting aliens and seemed to follow a similar line to the Groundhog Day movie. I spent the time knitting while we watched (and I secretly catch up on texts too).

Food Eaten: toast and tea for breakfast; leftover rice salad and eggs for lunch; glazed donut cake for tea, round two of taco salad for dinner with cut apples.

Posted by Heather LeFebvre at 10:26 AM

Hm, maybe we should make that cake for our Sunday treat. This past Sunday, some of our shorter family members complained about not having the usual post-church donuts.

Lovely to hear of your day to day from so far away. God bless. Catherine

NYC is really going through it right now. ❤🗽🙏🕯 Lord have mercy on those you know 🙏🕯 Lord help us all!