On Monday of our vacation we headed to Yorktown to celebrate the 234th anniversary of the day that Cornwallis surrendered the British troops (October 19, 1781). This day marked the end of fighting in the colonies though the war continued on the seas. 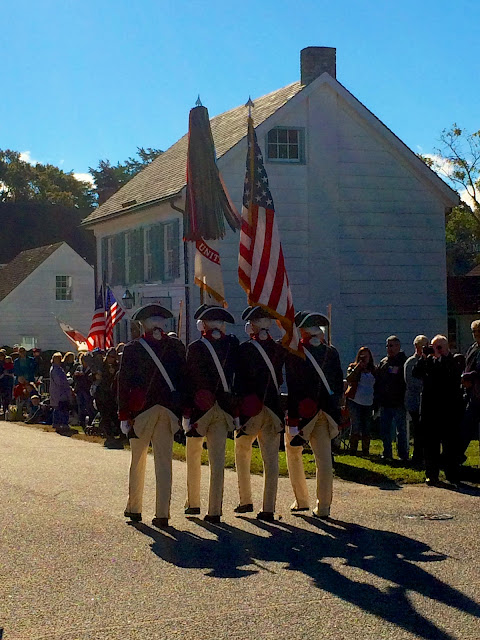 Yorktown Day begins with a military parade through the historic town. 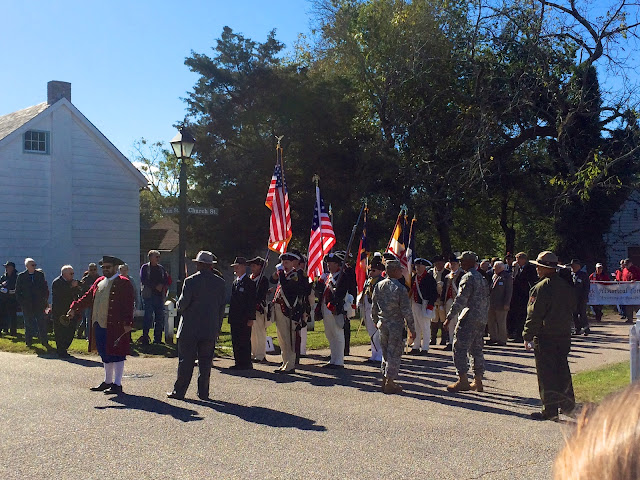 There were all kinds of groups involved and many in costume, including the Women's Club of Yorktown. 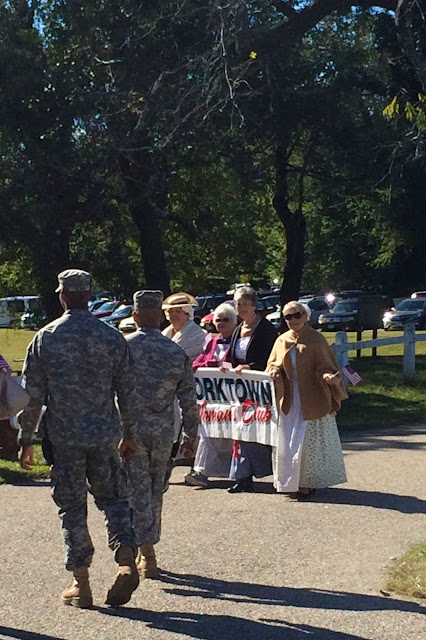 A member of a Scottish regiment it seems: 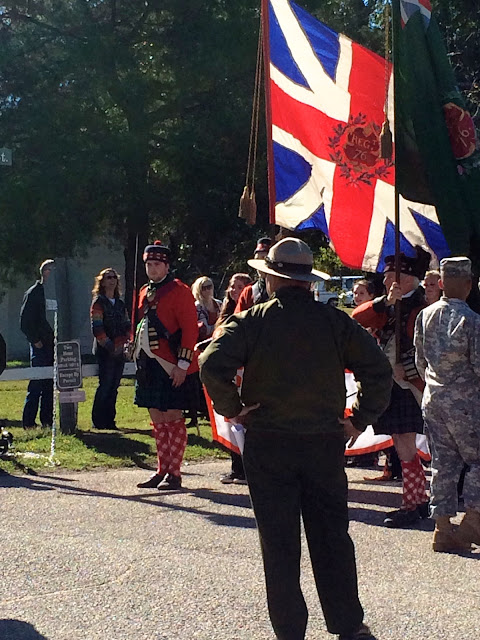 We showed up just in time to grab a spot at the start of the parade: 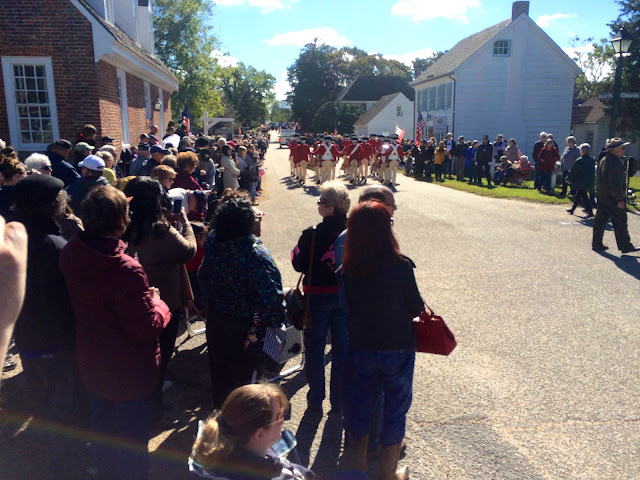 As soon as the parade was over the locals made a bee-line for the Women's Club's Brunswick Stew luncheon (Brunswick stew seems to be "the food" in these parts). Note the couple in the beautiful Scottish outfits to the right of the photo: 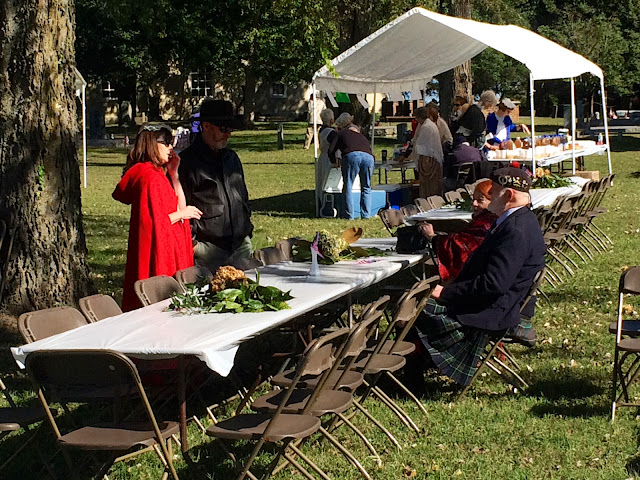 It made me think of scenes from Anne of Green Gables for some reason. I loved the homemade arrangements decorating each table -- they featured magnolia leaves and lots of foraged bits and pieces. 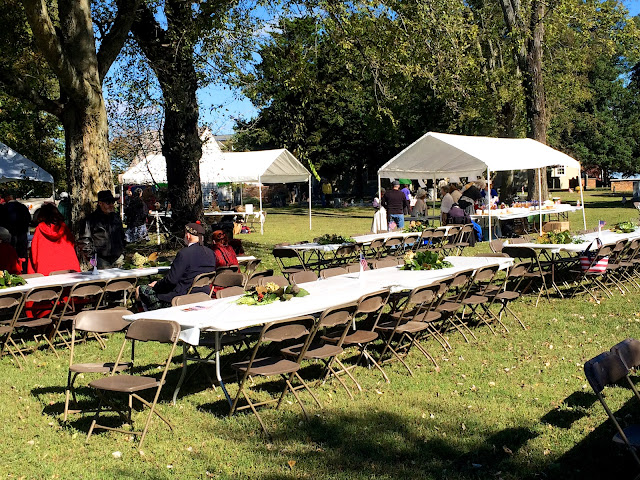 We stepped inside the Customs House to look around. The Customs House has a long history. It quartered British troops during the Revolution then French troops afterward and was used as a military headquarters during the Civil War and again used during World War I. 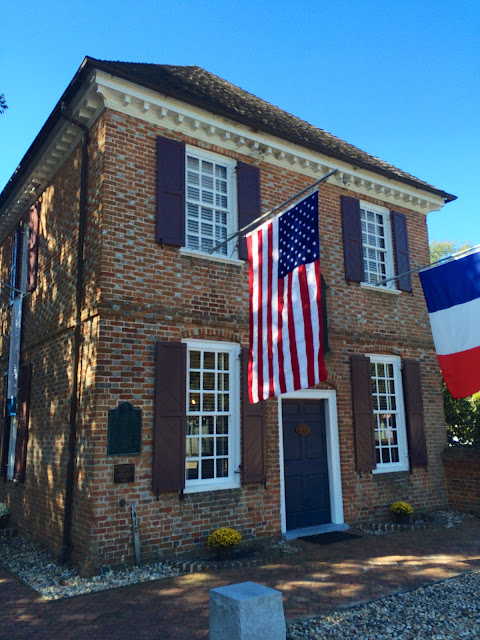 A few more of the Scottish Regiment walking around: 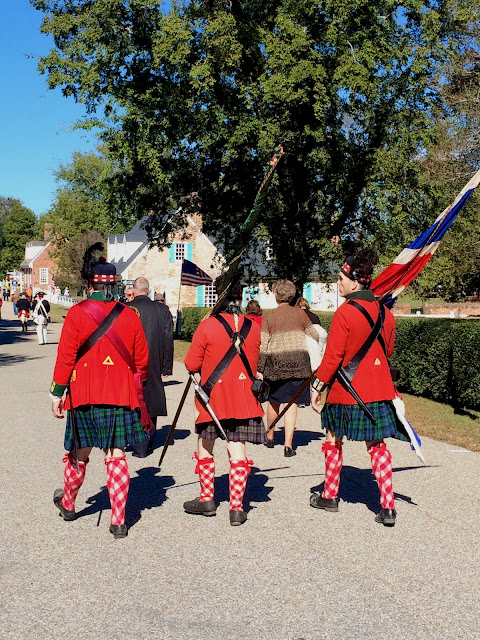 We really enjoyed walking through the Thomas Nelson house. Nelson was a signer of the Declaration of Independence and an important citizen of Yorktown. 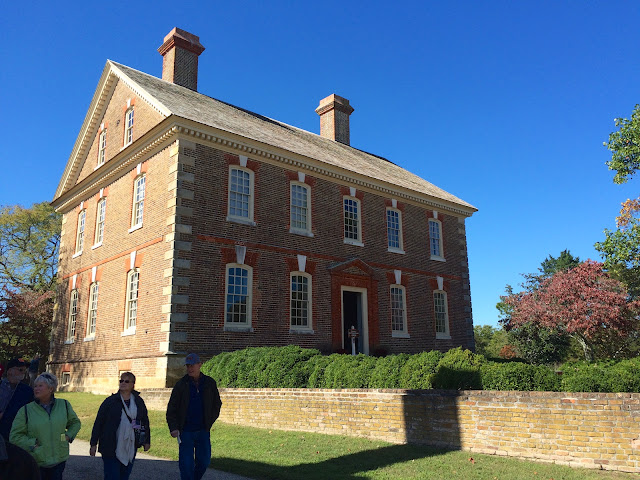 In the side of the house you can still see pock marks from cannon fire during the Revolutionary War battle! It was interesting to compare this house to the house on the grounds of the Powhatan Resort where we were staying as well as to the Wythe House at Colonial Williamsburg. Very similar. 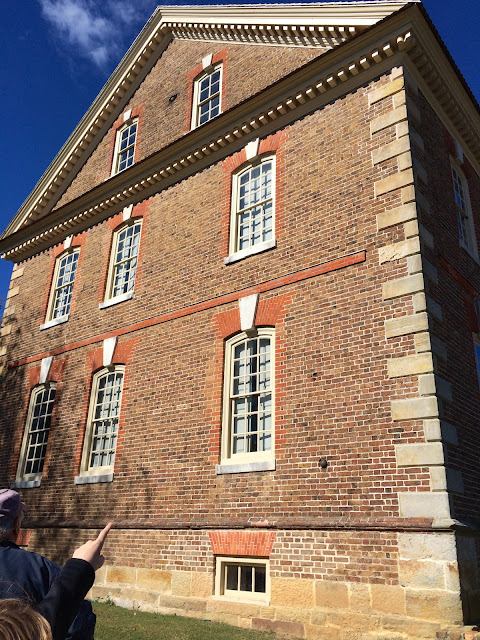 Yorktown was a lovely little town to walk around and there were historic, private homes all around. 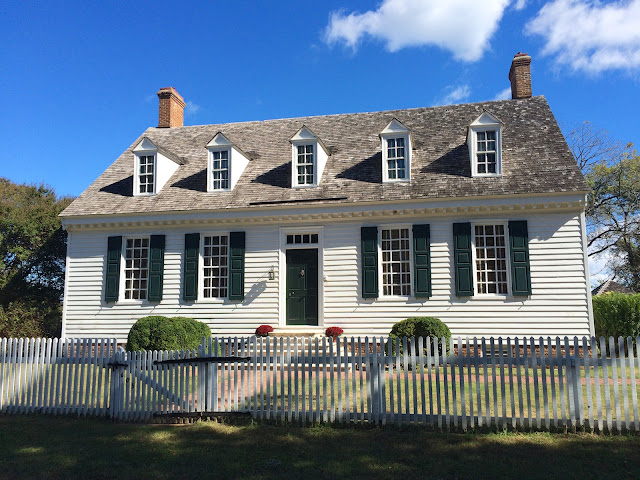 I think this was a bed and breakfast. 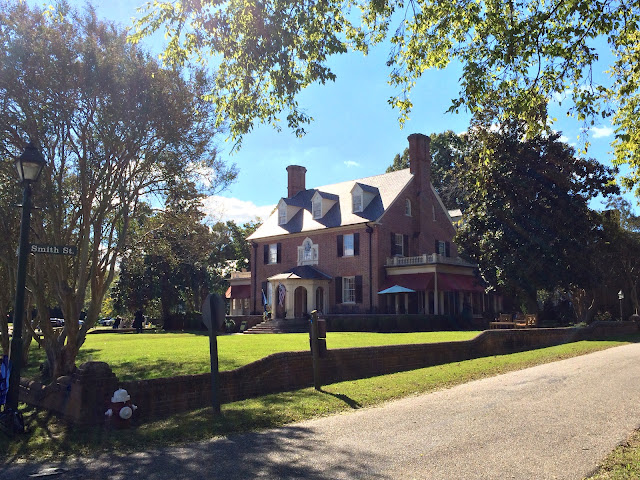 At the top of the street was the Yorktown Victory Monument where they had a procession with flags from each state and the singing of both the French national anthem and the United States national anthem. I guess the French played a big part in this victory. 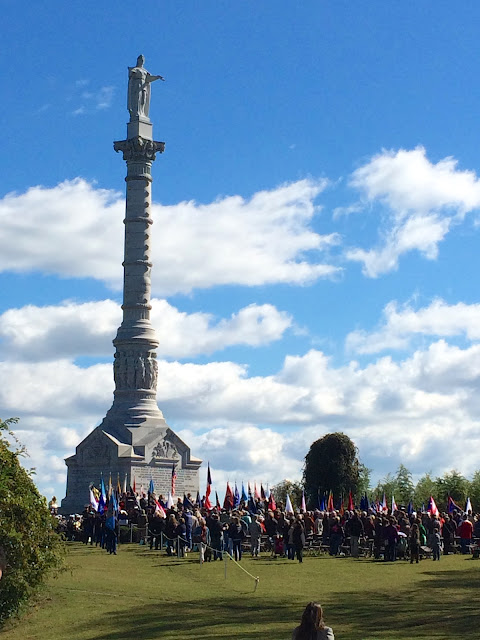 I loved this door that we passed: 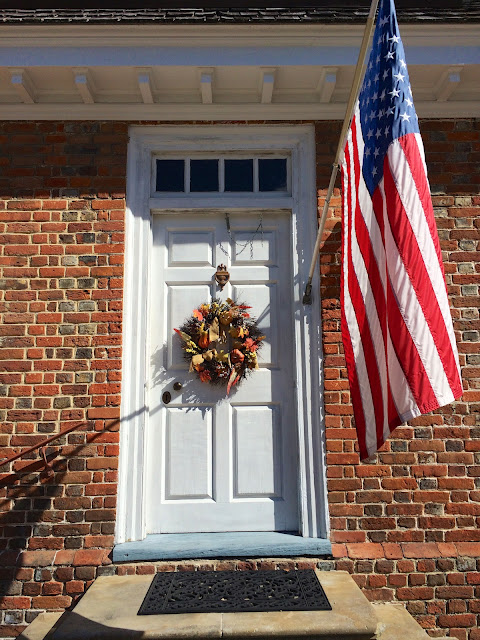 Yorktown has a small bit of history with the Civil War but it sounds like most of the residents cleared out during that time as life became very difficult for them. 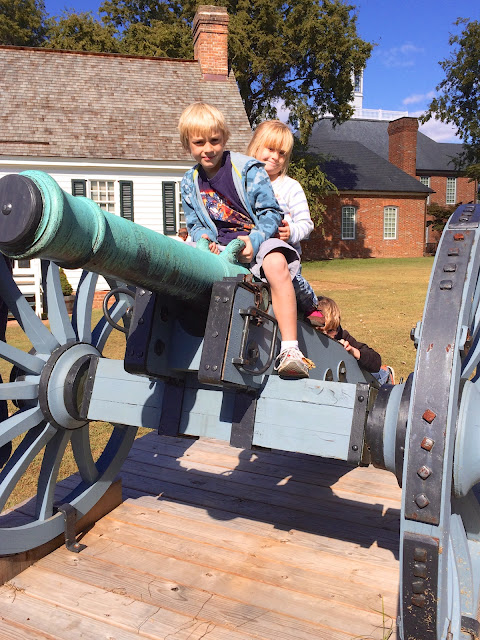 Yorktown is right on the York River so we went down to the beach to look around. 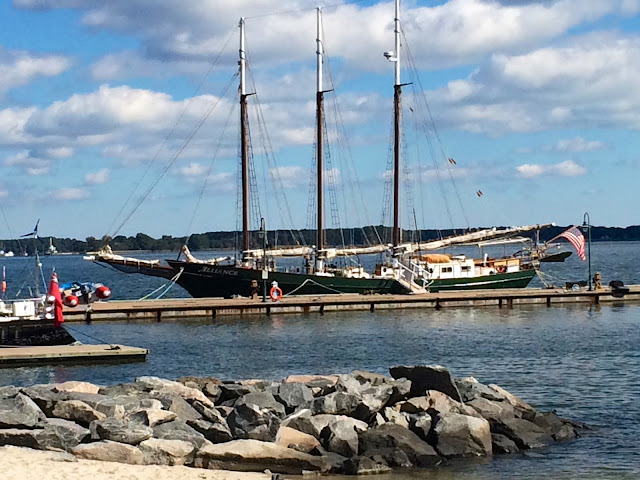 The kids had to get in some sand time: 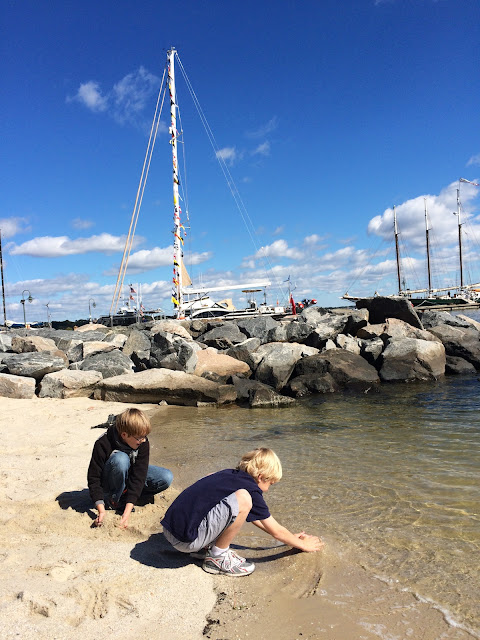 Then we had the bonus treat of watching a US Naval Destroyer come up the river and go through the swinging bridge! 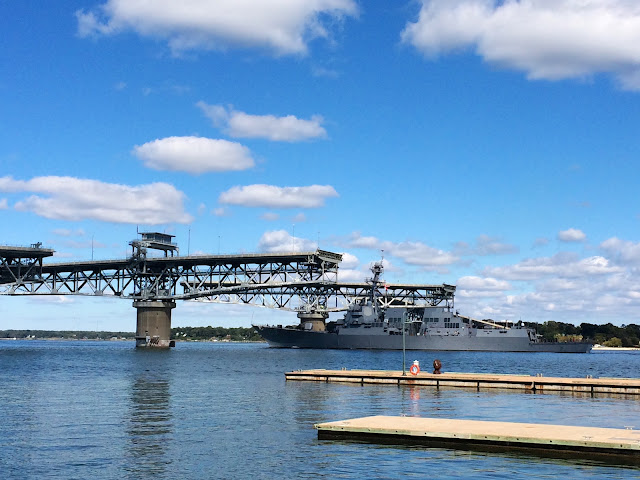 After dinner that night I took the three older kids back over to Williamsburg to go on an evening tour. It was fun to walk around at night and hear more history and stories and imagine life long ago! 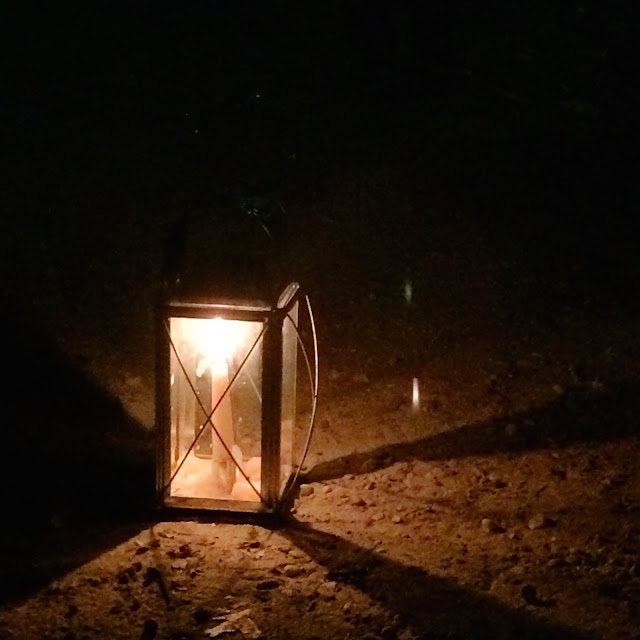 All of this touring couldn't have been more perfect for our history studies. Everyone but Rachel has been studying US history this fall and it was so fun to actually see the places we've been reading about!
Posted by Heather LeFebvre at 8:56 PM

That is fantastic. How great for your children to combine their studies with actually being in places where these landmark events happened long ago.