One of the unexpected perks of the 22 hours that we spent driving to and from our vacation was finishing my Juneberry Triangle shawl by Jared Flood!! I was quite sure I wouldn't have this done until spring and then would have to wait until fall came around again to enjoy it. Not so!!! It's done!! I'm very happy with it. 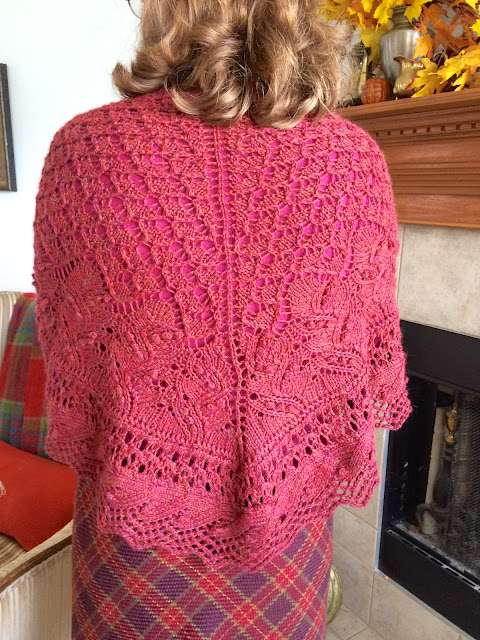 It's made with alpaca so it is very soft and doesn't irritate my skin. I love all the little bobbles included! 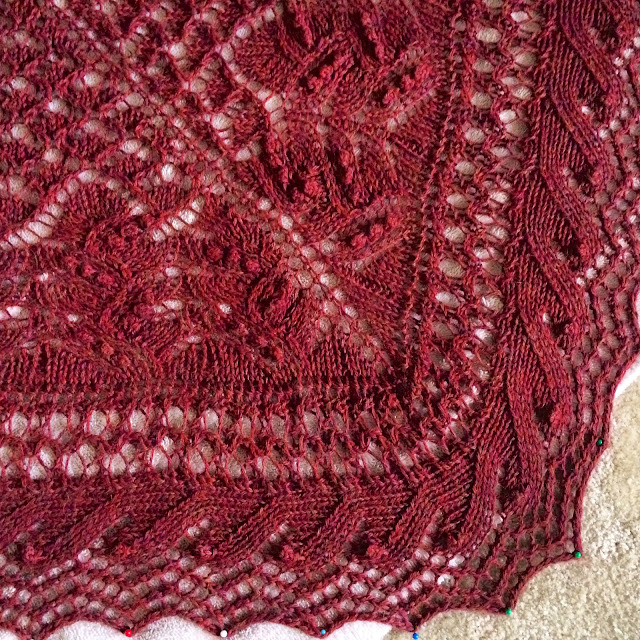 I love embroidery and crewel work. When we got back from Williamsburg we were at a friend's house and she had a gorgeous rendition of the "Olde Williamsburg" pictured below hanging on her wall. I was smitten. I've never really been an eBay person but you know what? I went on eBay and found there was an entire set of four historic cities and they were so reasonable I bought them! Now to decide how I will use them -- I really want to incorporate them into a quilt. 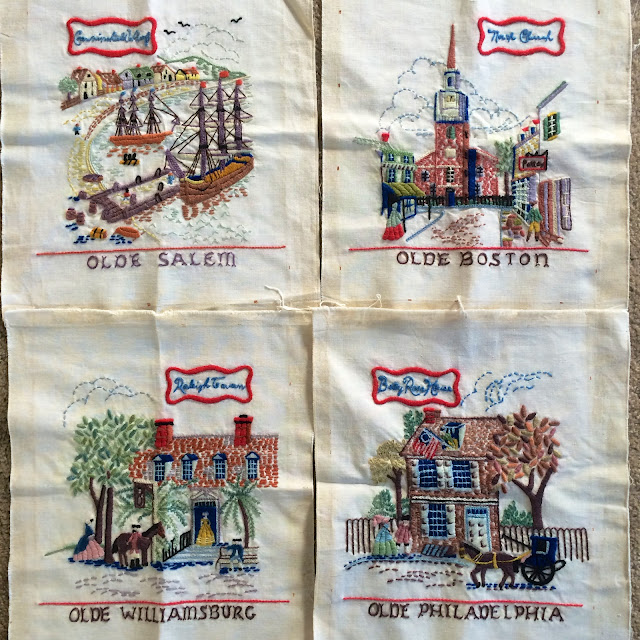 I bought myself a yard of each of these fabrics while we were in Williamsburg. I thought they made a nice souvenir and could be turned into a quilt. Maybe I'll combine them with the stitching! We'll see! 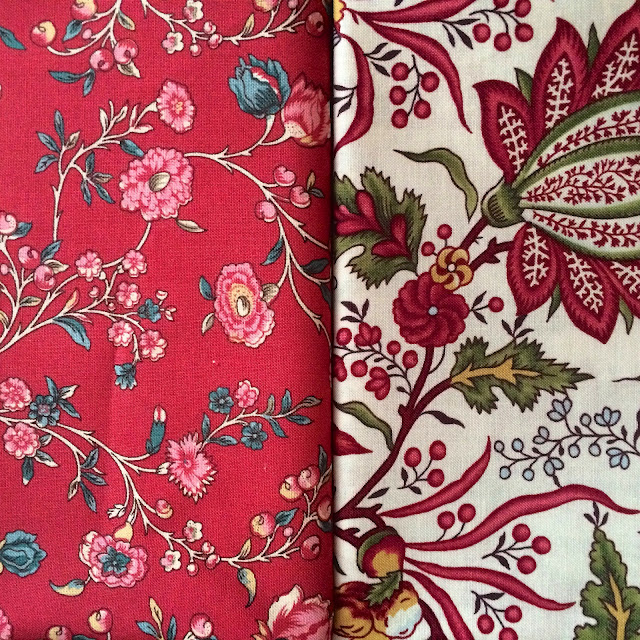 And I just finished my knitted pumpkin tea cozy!!! I used this pattern and just worked the colors to make a pumpkin. 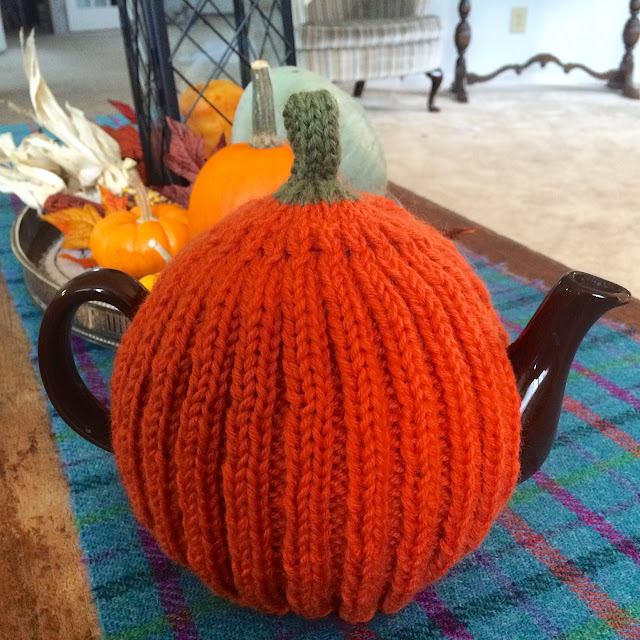 And now for books:

Northanger Abbey by Val McDermid. I still can't believe I am falling for these Jane Austen re-writes (The Austen Project)! This one was even better than Emma. It is set in modern day Edinburgh during the August Festival. I loved it! Probably because I knew most of the places and many of the little jokes or plays on festival happenings that were included. It was a fast read -- a bit like Young Adult fiction. Can't wait to see how Joanna Trollope handles Sense and Sensibility.

The Ravenmaster's Secret: Escape From The Tower Of London

by Elvira Woodruff was one of the books we listened to in the car on the way to our vacation. This is a well-written children's story set in the early 1700's in the Tower of London. It tells of the adventures of the Ravenmaster's son and the tangle he gets into when he attempts to help a young Scottish rebel imprisoned in the tower.

by Dorothy Cannell was my vacation read. It was perfect! I've never read Cannell before but will have to try some of her other books. This was a mystery set in Britain involving a large country house, a will, a near murder, and an escort. The book is very entertaining and light-hearted.

Carry On, Mr. Bowditch by Jean Lee Latham was our other vacation car ride book. This is our second time through this book and it is so good. It tells of the life of Nathaniel Bowditch, a mathematician and sea captain who lived in the 1700's. With his skills he was able to help the world of navigation and sailing become a much more safer place. This is well-written and attention-keeping.

by Paul Coughlin. The point of this book is to encourage parents to raise courageous children who don't just spend their time avoiding bad things but rather seek to do good. He urges parents to help their kids stand up to bullying, to know how to avoid danger, and to stand up for people that are being hurt. I think it could have provided just a bit more "how to" but I think the point of the book came across well and has provided me with a lot of food for thought.

For more ideas on books and knitting, visit Ginny's Yarn Along.

Hi Heather! Your pumpkin tea cozy is so cute. The shawl is absolutely gorgeous! Well done!

The shawl is wonderful, Heather. I am amazed that you can knit lace whilst travelling, I feel a bit queasy if i look at my knitting in the car (definitely can't read without feeling ill) so I only knit stocking stitch, usually socks!

Wasn't sure about the "new" Jane Austins - thought they might spoil favourite books but i might try Northanger Abbey. Its probably my least favourite so a good one to start with and also with David living in Edinburgh, I am getting to know the city a little so that would be interesting.

Hi Heather, it is so nice to have found you and your blog. Your shawl is just stunning. I do lace, but I'm not sure I could do anything so big and so detailed! I also love embroidery. I really enjoyed all your Williamsburg photos. My brother lives there, so I have visited many times. I'm thinking the embroidery would be a great gift for him. Thanks for the idea!

Hi Heather. This is my first visit. I love the color of your shawl. It is beautiful - so delicate looking. Thank you for sharing!

the picture with your shawl and the perfectly matching skirt is so beautiful!!! wow!!! how lovely!

Your shawl is just beautiful!!