Some of you may be wondering why I mention Scotland so frequently. Those of you who know me in person know why, but I thought I might fill the rest of you in on just what the big deal is about Scotland for our family.

It all started as a child at Christmastime. Every December my mother started to stockpile real butter, somehow stretching our tiny food budget so that she would have sometimes as many as 9 pounds of butter on hand. Then, one day she would pull out an ancient recipe card, yellowed with age and the real ink writing fading over the years. We would watch as she continued the family tradition of making Scottish shortbread with the recipe her grandmother had brought over from Scotland when she emigrated in the early 1900's.

Mom would go on to tell us about the Scottish aunts (really great aunts) that would visit her family from time to time and the long, brisk walks they would take her on. We all listened with rapt attention. The only maternal grandparents and great-grandparents we had were the ones we created in our imaginations from the memories mom recounted. Sometimes we talked on the phone to our great Uncle Roy whose mother had taken him back to Scotland to romp in the rolling hills outside Dunblane, riding the train with his grandfather and bringing back to the States memories of the mother land.

Fast forward several years and we landed in Indiana in a denomination that came directly out of the Scottish Reformation. Not only that, but our church began to offer seminary level church history courses, including one specifically on the Reformation period. We all signed up to audit. Even better, the church decided to organize a group of young people and parents to travel to Scotland for 2 1/2 weeks specifically to study the First and Second Scottish Reformations and learn more about the "Covenanters" who fought so hard for religious freedom in the 17th century.

My mom had always dreamed of going to Scotland and soon we began dreaming with her. What about all three of us girls and mom going on this Reformation tour?! It sounded like a great idea to all of us and we signed up. Christina and I had jobs that enabled us to pay our way but mom and Emily were relying on Dad's job. And then Dad lost his job, and mom's lifetime dream seemed to be slipping away. It just couldn't be true that after all this she wouldn't be able to go. And then at the 11th hour her cousin called to tell her that Uncle Roy had unexpectedly left a small legacy to her in his will -- enough to cover the trip expenses for Emily and mom!!! (Imagine the tears.....) 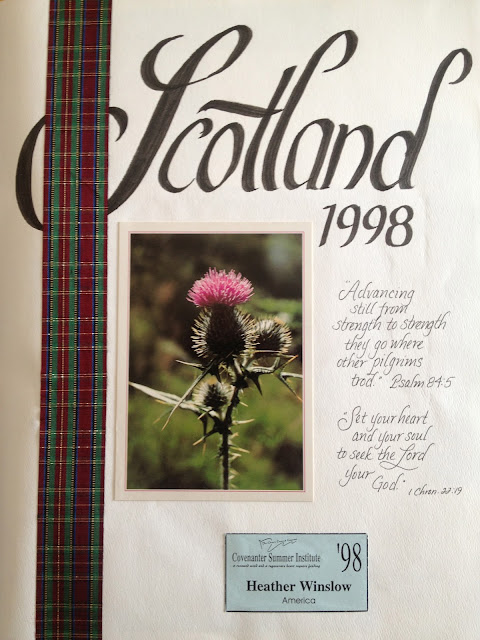 So, in the summer of 1998 we headed to Scotland along with a whole group of friends from church (including Michael). We stayed in the quaint and beautiful town of Biggar. Each morning we had lectures on various aspects of the Reformation and each afternoon we loaded into a touring bus (coach) and headed out to various historical sites to see what we had been hearing about in the morning. It was a once in a lifetime convergence of amazing historians, beautiful settings, excellent fellowship, and fulfilled dreams. It was also the very tiny beginning of the romance that developed between Michael and me. 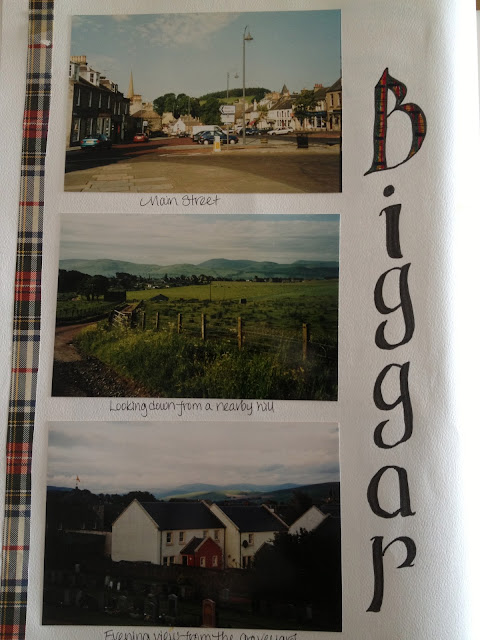 Another special part of this trip was that our senior pastor and his wife were part of this tour. I happened to work in their home as a secretary for our pastor and it was my privilege to be able to sip countless cups of tea with Mrs. B and hear in detail about the years they spent in Scotland while Dr. B studied for his PhD. A highlight of the trip was going with them to visit one of the houses I had heard so much about -- I believe they lived here during the 1950's. 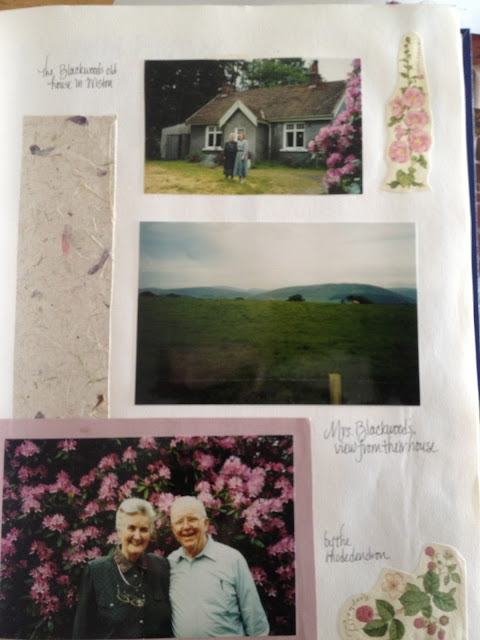 On Sundays we visited several congregations affiliated with our own denomination. This was our first visit to the Airdrie congregation which would later become our home church for nearly 4 1/2 years. 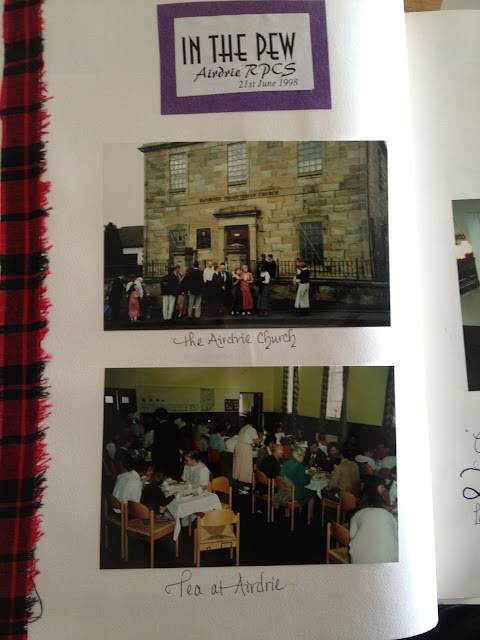 Not only would we visit the Reformation sites but often we would have one of the very godly men leading the tour speak on a passage of Scripture, or we would sing the very same psalm that the martyrs had sung at this very place right before their deaths, or we would have a time of prayer. These weeks would become life-changing in many ways. 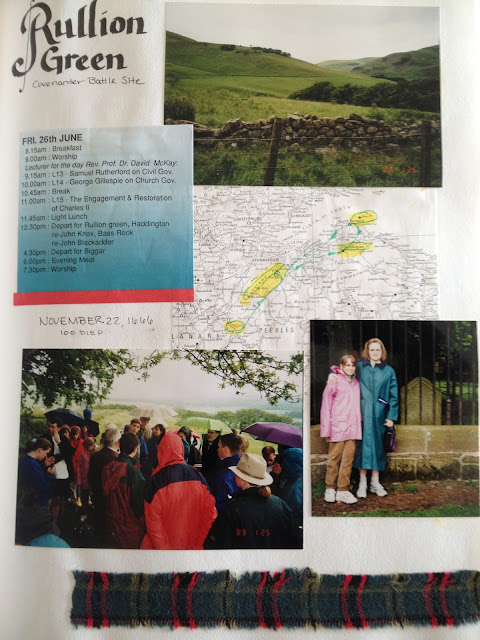 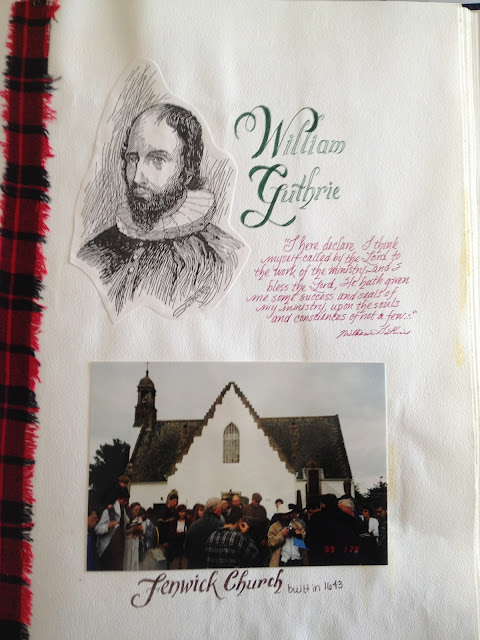 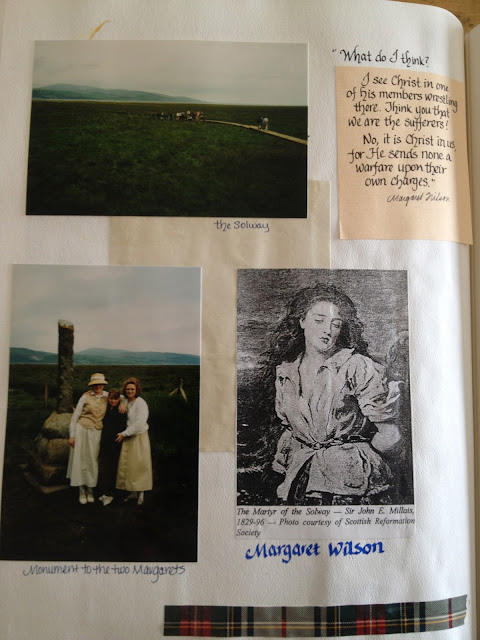 We had one free day in which to try and visit the town of Dunblane and the home of our shortbread-baking Great Grandmother. My mom had a little birthday money and with it she bought train tickets for us to head to Dunblane, alighting at the very train station where our great-great grandfather had been station master. 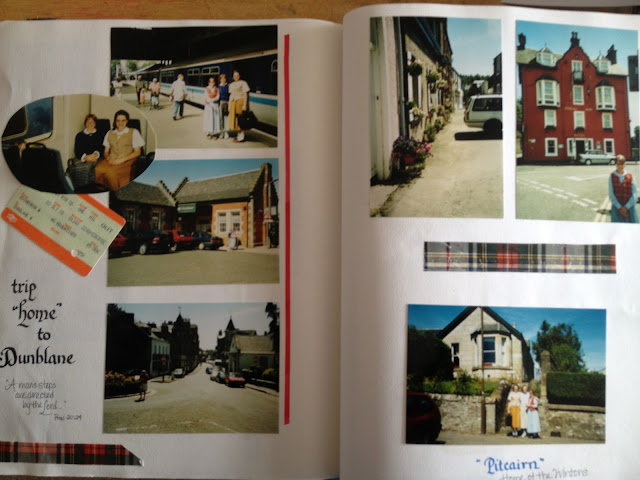 Through a series of events that later were determined only to be miraculous, we tracked down the house where our family had lived, found their gravestone in the Cathedral yard (never having known where they were buried!), and most miraculous of all, actually met a woman who turned out to have been our family's former neighbor and close friend (whom we had never heard of). Imagine my mother's surprise at walking into this woman's house and seeing on the wall a painting her very own mother (my grandmother) had painted!!! And to think we had arrived just two or three hours earlier in this town not knowing a soul or how to go about finding any family information. 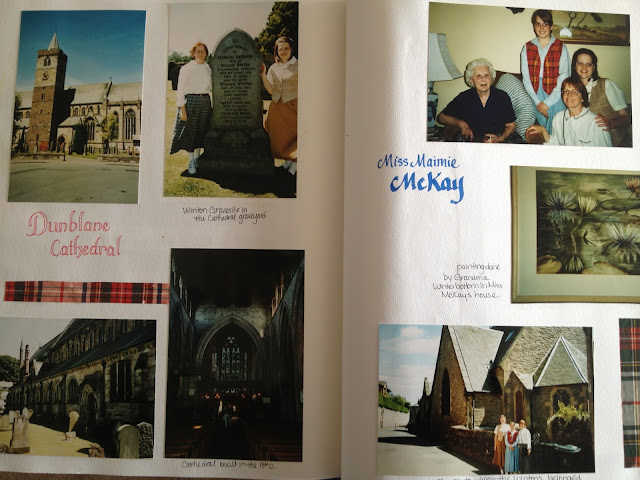 Truly the trip had been as full and meaningful and special as a trip could ever be. We all returned home with precious memories, never thinking it would be granted to us to return again to this special country.
Posted by Heather L. at 9:58 PM

Email ThisBlogThis!Share to TwitterShare to FacebookShare to Pinterest
Labels: scotland

So interesting! What an amazing trip. Do you still keep in contact with the neighbour. I would love to know the story of the two Margarets.

I love how I've known you for so long (in Scotland and out of it) and still didn't know half of this! Great stories! :D Yay for you coming back soon!

Heather, Thank you! I am looking forward to the rest of the story.

That was really fascinating! I love the "coincidences" that led you to the grave and the neighbour. Thanks so much for sharing all that.

Thanks for sharing your books/photo's/memories with us! I can't wait to see the next round of photo's from Scotland!

Love this. Im so behind on blogs these days but yours is always a favorite. What a great story ...