Keeping Up With The Jones' 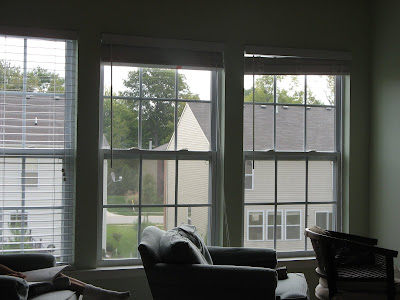 Michael and I had a good laugh this morning. Despite my being confined to bed, I still seem to be keeping up with what is happening with the neighbors.

Several years ago I spent 9 months on the couch, looking out the window observing the five houses I could see from where I lay, and their occupants. I was not acquainted with these neighbors, but got to know them in my mind as I imagined their lives from their comings and goings. I even figured out a mystery or two by the time we moved.

In my new neighborhood, I've been narrating events to Michael concerning the house I see out to the right of our bedroom window. So far, the short story is:

When we moved in people were living in the house. One day, some of the contents moved out, and I assumed perhaps there had been a divorce. Several months later the house became totally vacant. With some other sleuthing, I determined the house was up for sale by the bank. Recently it has been painted inside. With a bad hail storm this summer I saw an inspector come out and mark the roof. I assumed his findings were: not enough damage. This morning a man and woman team arrived to inspect again and I watched the woman mark the roof with chalk. I decided she had found more evidence and determined: enough damage to warrant a new roof. So, now I'm just trying to determine who sent which inspector. Most likely the next show I'll be watching is the installation of a new roof. The entertainment one can find from a second story window! 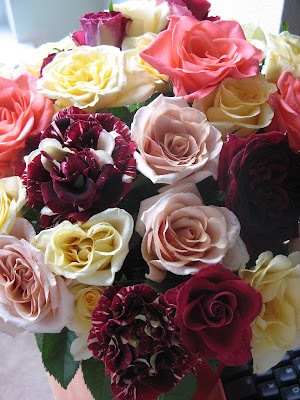 Here are the roses again after they've opened up. I'm certain God sent them straight from Heaven through my friends, to me, knowing I needed that visible encouragement from Him.
Posted by Heather L. at 1:27 PM

gorgeous! i am a bit of a rear window person myself. kevin and i make up stories about everyone and every thing heh. tough part is sorting out reality when we are all done : )

have you seen the film rear window? If not you should rent it...a great match for you :)