We had so much fun on our homeschool field trip last week! We drove far from home into the deep country to see the birthplace of Wilbur Wright, one of the early pioneers of airplane flight. 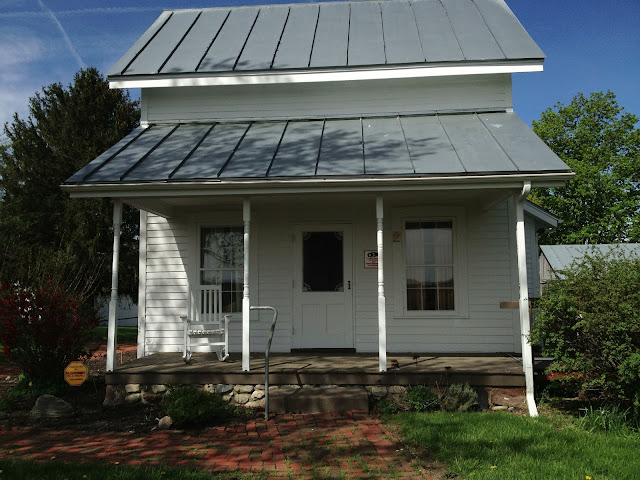 Wilbur only lived here for less than 2 years, I believe, because his father was a minister in what became the United Methodist church and thus their family moved often. However, this house is typical of dwellings of the era (1860's) and it was fun to imagine the Wright's life in these circumstances. 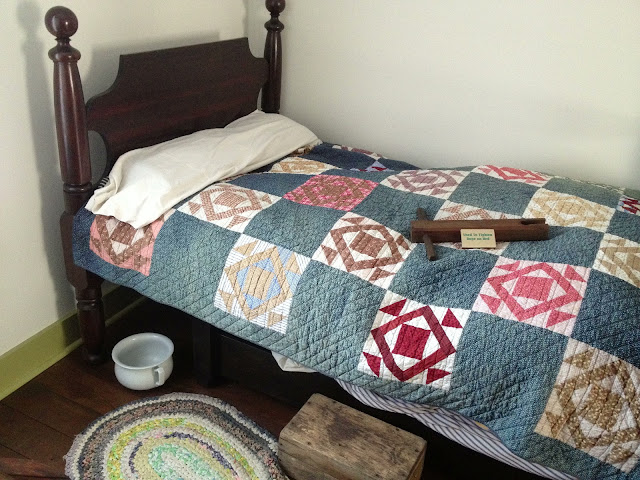 I particularly loved the kitchen! 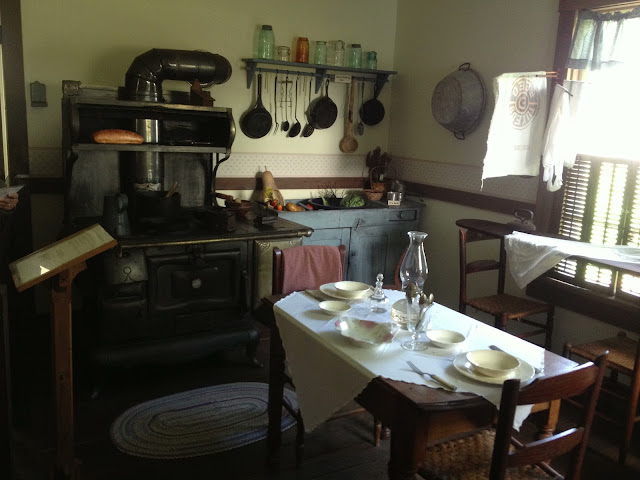 Apparently, Wilbur and Orville's mother was quite mechanically minded and as children they took their broken toys and failed experiments to her for advice and help! I loved thinking about the way this busy, hard-working, Victorian-era mother nurtured the natural interests of her children and created an atmosphere where they could experiment and learn. 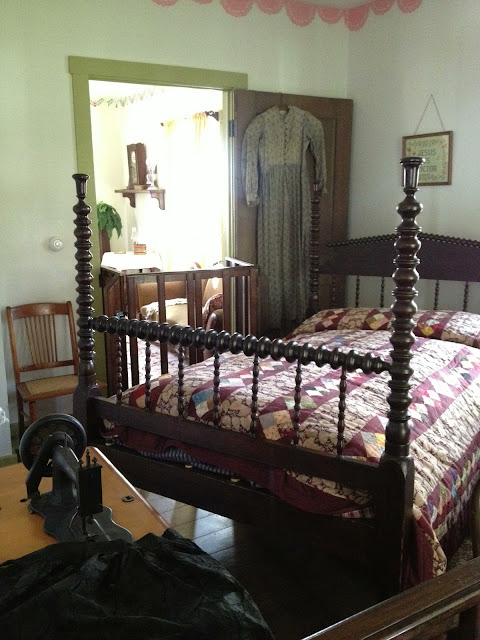 Wilbur's father was a traveling minister and of course I couldn't help comparing the lives of Wilbur and his siblings to the lives of my own children, though I am thankful we haven't had to move so much!!! 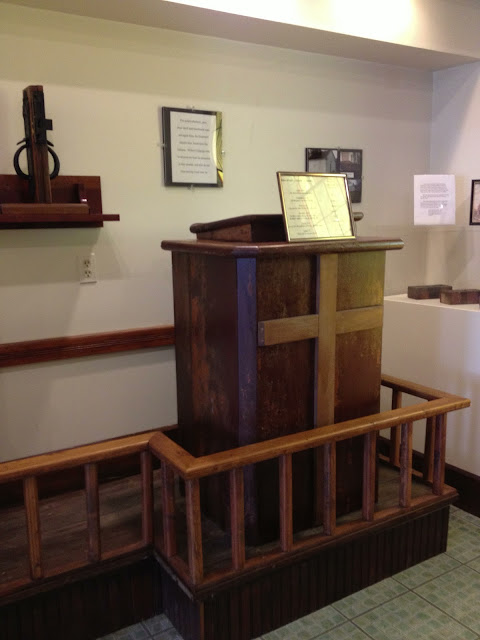 Originally, Wilbur had planned to go to Yale and become a minister himself but a freak accident with a hockey stick left him without his front teeth and sent him into a depression which caused him to change his mind. Thus his life began to go in the direction of inventing a flying machine.

Isn't it interesting how God uses ordinary, often difficult, life circumstances to direct us into the destinies that he has for us. God so directed Wilbur, through ordinary ways, to glorify Him most in the inventing of an airplane! 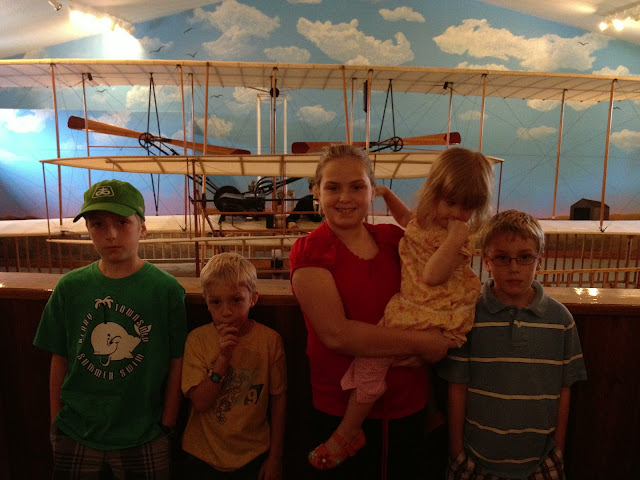 With such lovely weather, we all enjoyed a picnic outside!! 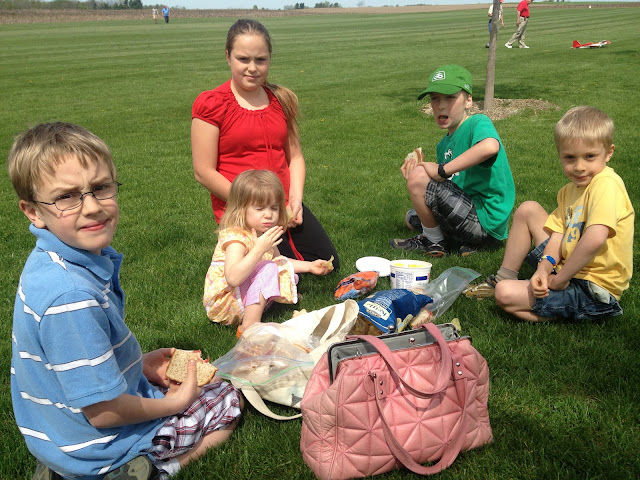 Then we drove to the second stop of the day -- the Levi Coffin House. 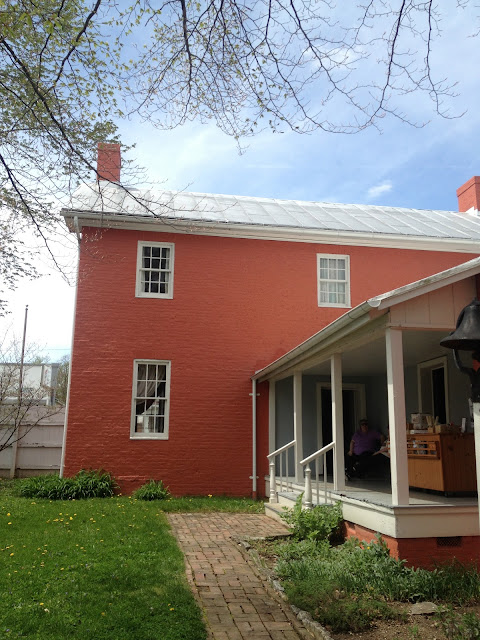 Levi Coffin was one of the most famous people connected with the Underground Railroad, helping to get about 2,000 slaves to freedom during the 20 years that he and his wife so lovingly worked in this vocation.

Here is Rachel beside a false-bottomed wagon -- just the kind the slaves would have left the Coffin house in, bound for the next stop on the underground railroad. 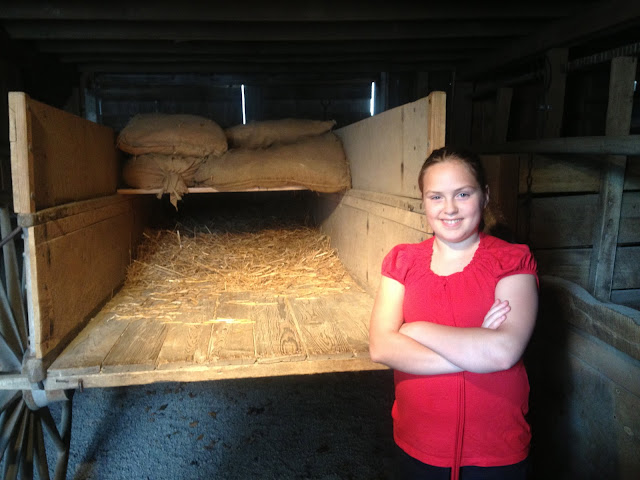 I can't help but admire this man who knew the laws of the land and sought to abide by them as much as he morally could. He may have broken federal laws by helping slaves, but he knew the Indiana laws so well that he managed to avoid having his house searched or being put in prison himself even though everyone knew what he was up to. 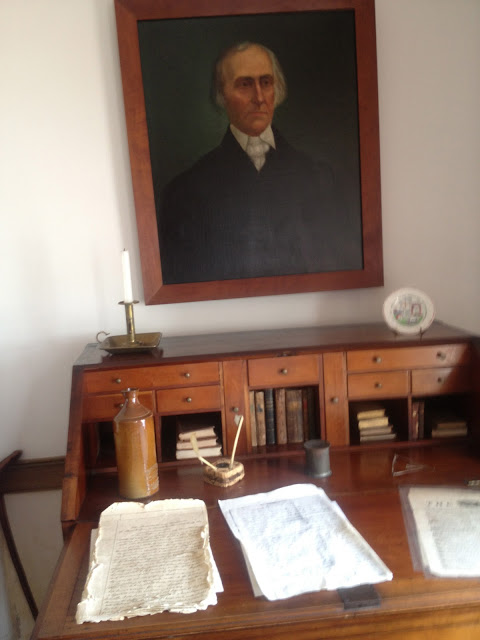 I also loved the fact that Levi and his wife worked together as a team. They couldn't have done what they did on their own. "Aunt Kate" welcomed newly arrived slaves at all hours of the day and night and promptly fed them and found places for them to sleep or hide. 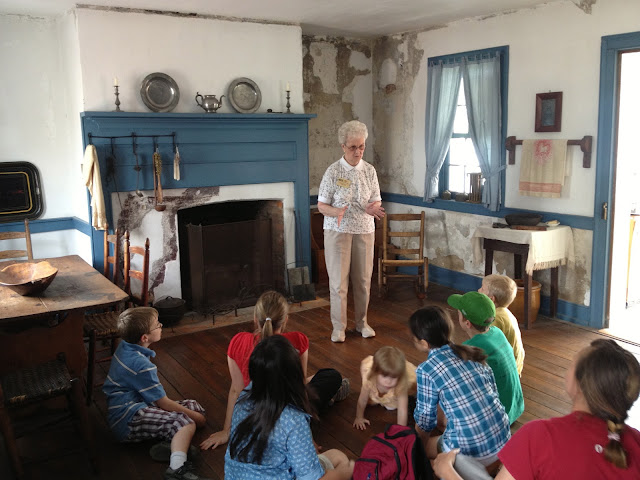 This family invested their whole lives and fortune in this important work and nearly went bankrupt at one point. 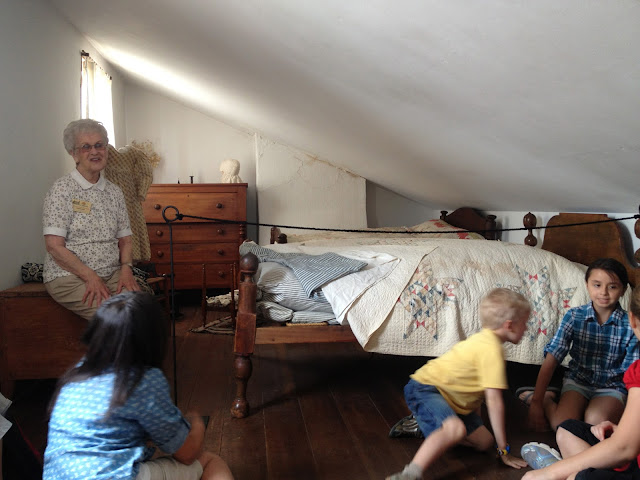 Rachel is sitting in front of one of the secret hiding places in the Coffin home. These things are always so intriguing for children! I always wished I would find a secret connection to the underground railroad in my home growing up! 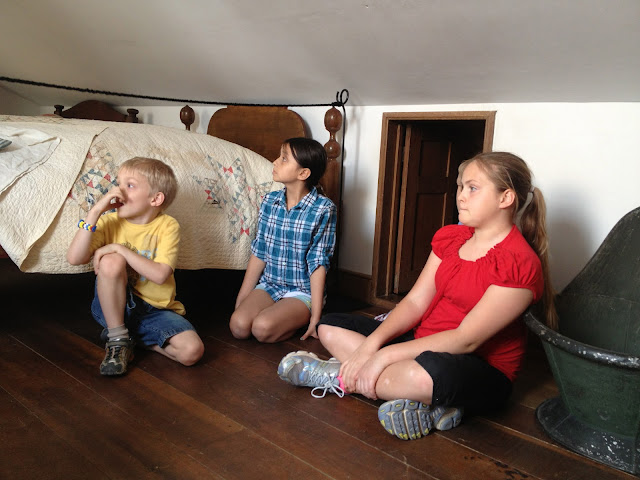 I just loved the doll bed!!! (The Coffins had six children of their own) 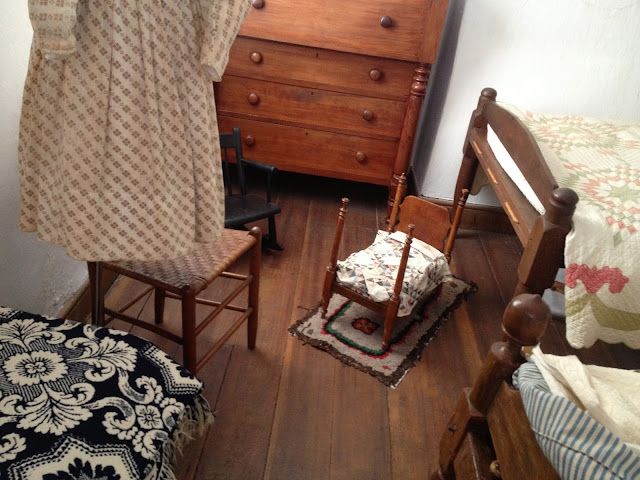 Our field trip was extra fun because so many friends from homeschool group were along too! 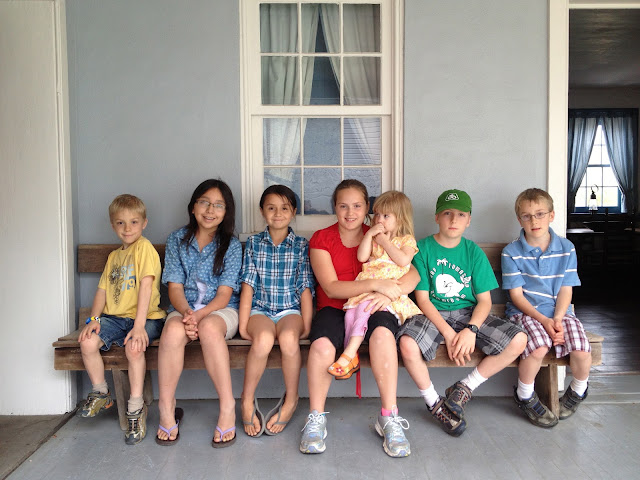 The kitchen in this home was in the basement, which probably made sense for hot summers! 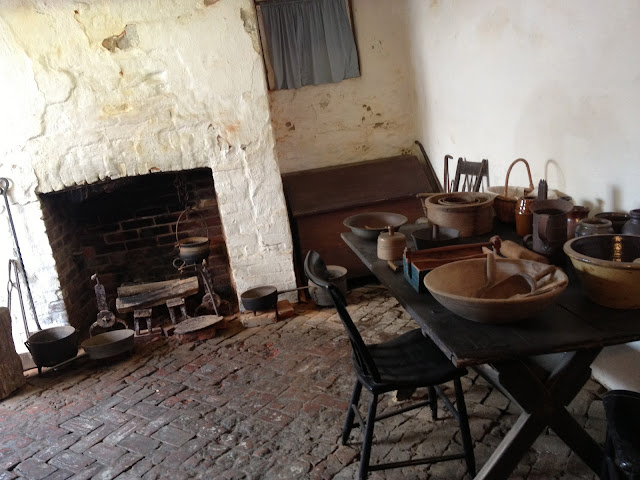 We couldn't get over the well in the basement, which appeared to be empty but in reality was filled to the very top -- our guide had to stir the water with her hand just to prove this point! 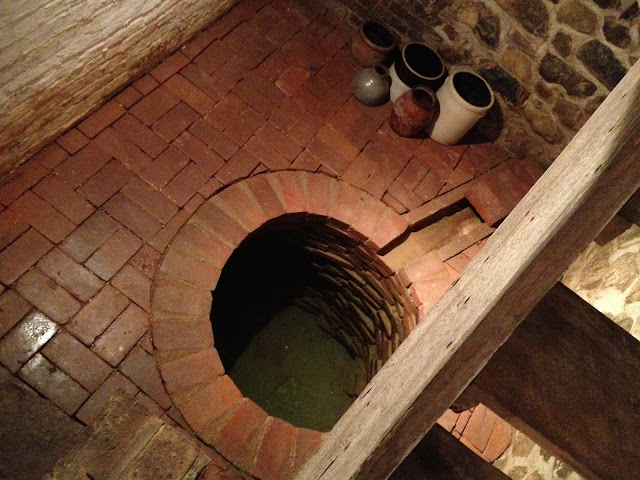 And here is the house from the front: 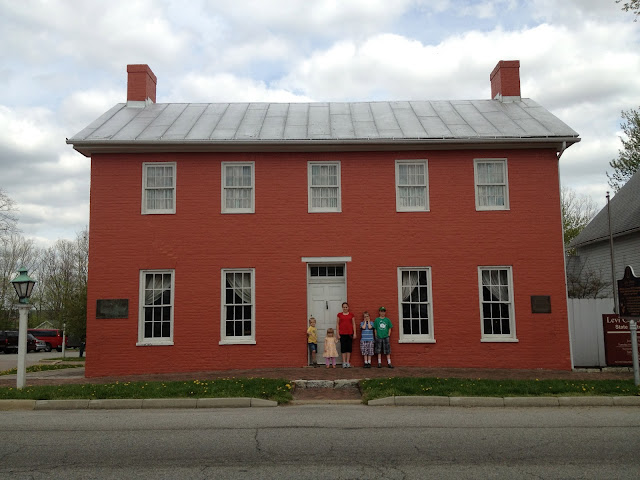 And the small backyard was beautiful at this time of year! 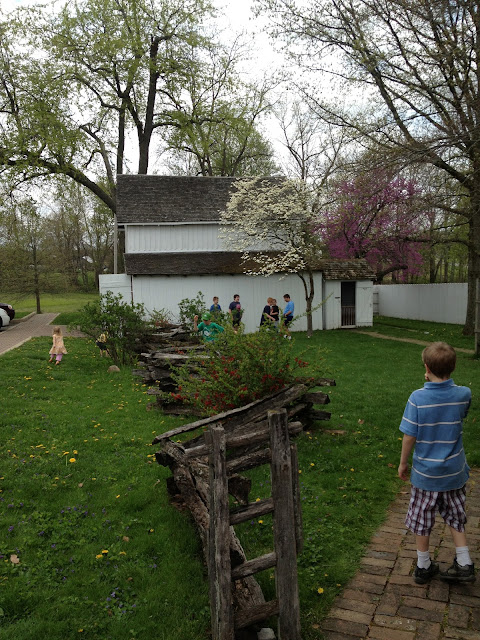 I enjoyed looking at all the period furnishings and imagining life at this time in American history. Several years ago we studied Indiana History and read a number of excellent books including By Freedom's Light

which tells the story of a young girl in Indiana and her struggles over what to think of the underground railroad. 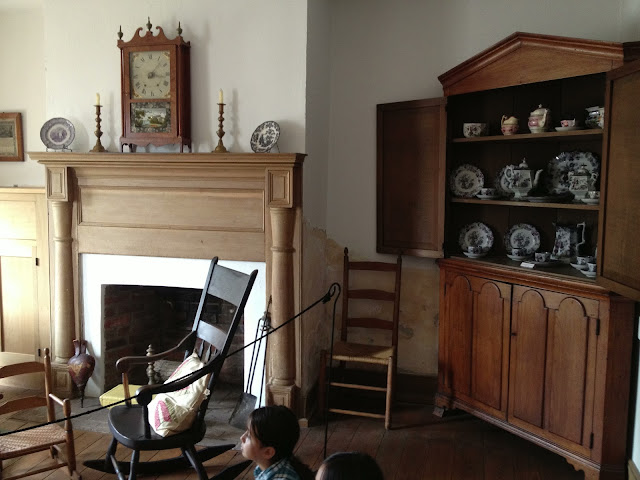 Several of the scenes in the book take place right in this sitting room! It was fun to finally see it in person! 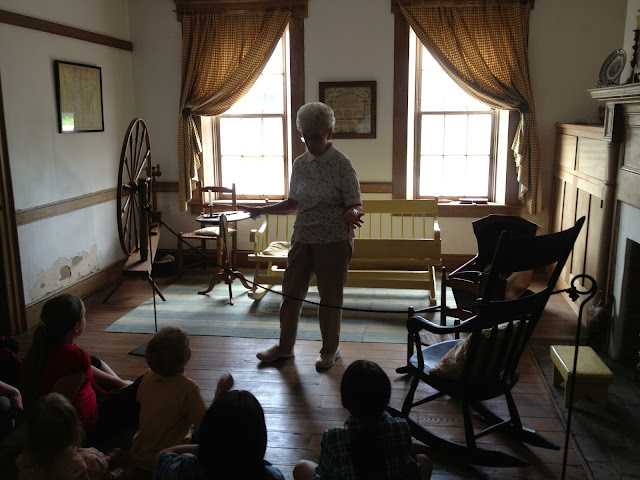 History is certainly one of my very favorite things and it was a treat to experience a day like this. As you can see, I came home with plenty of things to think about and ponder for my own life!

Email ThisBlogThis!Share to TwitterShare to FacebookShare to Pinterest
Labels: school

Amazing times of fun and learning for your little scholars! I love field trips as much as the children do I think - and we always learn so much!

Loved seeing the pictures..and hear of your day.. so fun.. these are the best times.. cherish them greatly!!! How I loved doing Home School with you and your sisters.. we all learn so much!!