When I saw one of Betz White's recent projects, I just knew I had to try and make one for my sister, Christina, for an early birthday present. My mom brought over an old sweater (that purportedly was originally Christina's!) and into the hot washing machine it went! 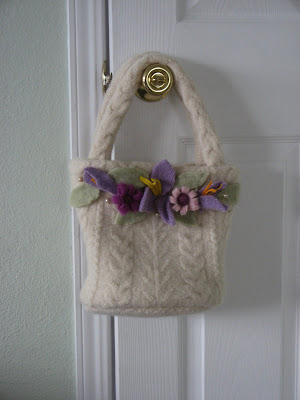 The purse was much easier to make than I thought -- basically just three seams, and since felted wool doesn't unravel, it was even easier. I didn't take a picture, but the purse is lined with bright and cheery yellow fabric and there is a piece of cardboard in the bottom to make it nice and stiff. Making the decoration is what took all the time.

This is re-purposing at its best! All the wool comes from felted, previously worn, sweaters. Even the pearls that were sewn on came from an old necklace that finally broke. I guess I could have used some fabric for the lining that I had around from an old skirt or something, but I thought of that too late!


We are gearing up for this coming Sunday when we will have all the family here for a big lunch after church. Leg of Lamb is on the menu, which I've never cooked before! I'm getting the plan in mind. :)

Yesterday I focused my attention on making Hot Cross Buns which will also be part of Sunday's menu. The aroma this created was just intoxicating! It smelled like Spring in Scotland. It was even raining and foggy outside and this helped to make me think I was back in the UK. I really, really like Hot Cross Buns -- they smell of mixed spice and are laced with currants and bits of candied orange peel (but good candied orange peel, not the nasty kind) all mixed up in a fortified yeast dough. This year I finally managed to come up with a recipe that resulted in very soft buns, instead of tough.

Today we will try to take things easy, fold the laundry and do school. I'm trying hard to pace myself for this week. No sense in getting all worn out prematurely! I need to get into another good book. I think it is about time to put in another order at the library -- my stash is running low.

Happy middle of the week to you all!
Posted by Heather L. at 8:33 AM

Would you post your hot cross bun recipe? My mom always made them for us for Easter morning, and I want to start that for my kids too.

I love the purse you made!!! I'm spring cleaning this week and hoping to find more sweaters I can felt. :)

Cute purse!! Maybe sometime you could explain to me how this is done in more detail. I'd like to give it a try sometime.

Beautiful purse! And the buns were sooo good! Thanks so much for bringing us some - we enjoyed them with our hot cereal supper. :)

Its cold, clear & sunny here in the UK today! Spring is here but only just! Cute purse. I wish I had some hot x buns -I love the smell!

I love your purse Heather - and all 'recycled' - I think that is wonderful! I am all about re-purposing! I am terrified of trying to felt any sweaters though since I'm afraid my machine will clog with all of the fibrous mess. Have you have any difficulties?

Hot cross buns are a favorite around here too! Where do you find the good kind of orange peel? All I see in our store is the nasty nasty stuff - so we'll stick with currents only I guess!

It came out great! I love it. Thanks for linking back to my site.

The bag is really lovely.

I'd also be interested in your hot cross bun recipe as mine always turn out with too hard a crust! I was interested that you eat your Hot Cross buns on Easter Sunday - we have ours on Good Friday.