Last night we had 20 ladies here for a shower in honor of our friend Stephanie who is to be married in just 10 days time!

The theme for the shower was Jane Austen. Stephanie has a literature major and loves books, so I thought something along that line would be just the thing.

Punch was served as people arrived (in my latest find from Thrifty Threads!): 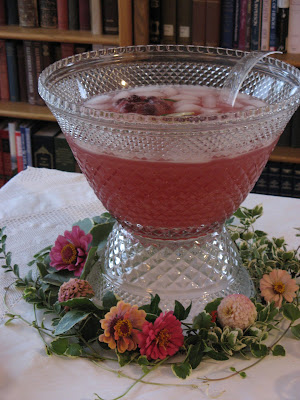 Our opening activity was a matching game. Upon arrival, people were asked to choose a card with a name/book title from Austen's works on it. Once we were all seated I passed around a basket of presents wrapped in white tissue paper and each one tagged with a quote or character description. We took turns reading the quotes and then matching the gift with the person holding the correct card.

I forgot to take a picture of all the little gifts neatly wrapped in their tissue paper -- but here is a mishmash picture from my desk before the wrapping took place. The gifts served as favors and were meant to evoke the feeling of Austen England. 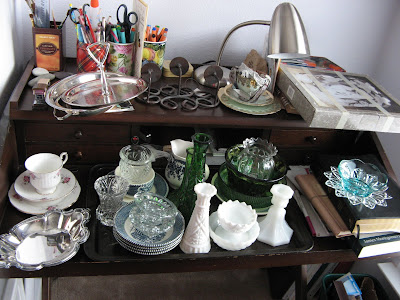 Thanks to my mom's arranging and my friend's flower garden, we had lovely flowers all over. Plenty of candles were lit to give the atmosphere of 200 years ago. 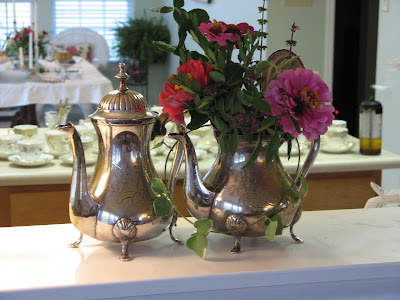 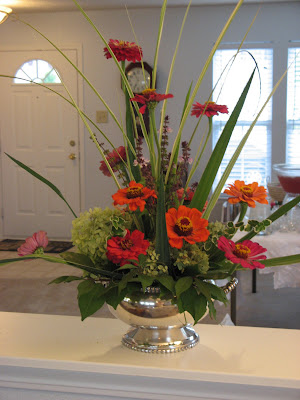 Before we dove into the food, we had three ladies share readings from books of their own choosing. Our first reading was from Laura Ingalls Wilder about a Butter Churn -- very amusing and yet filled with truth about marriage. Then we had a challenging piece from Edith Schaeffer on caring for husbands/family members during sickness and how that is not time lost but is part of growing and nurturing that relationship. We ended with 3 very funny pieces about Book Lice, Queen and Worker Bees, and Henry V (Shakespeare)! I couldn't have thought of better readings myself!

In keeping with our theme we had food that would have been served in Jane Austen times: 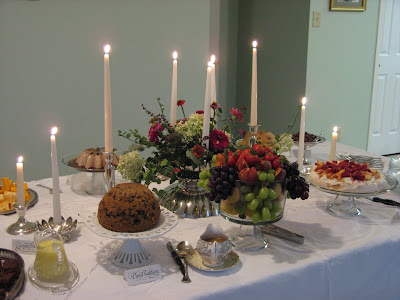 Jellys, especially Blancmange, were popular back then. We had a more modern version with Watermellon Jelly: 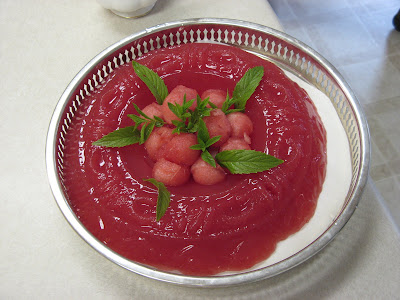 A few boiled puddings were a must! (Confession: I couldn't bear the thought of boiling a few puds for 4 hours on the stove top in this heat. So, I stooped to using the microwave. Fortunately, I have a microwaveable pudding bowl which I bought and never used. It came in handy! Within 20 minutes I had two puddings nicely cooked!) Here we have Plum Pudding (or Christmas Pudding to be more precise): 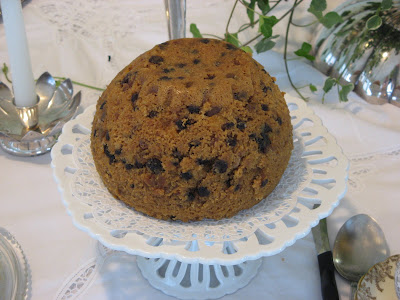 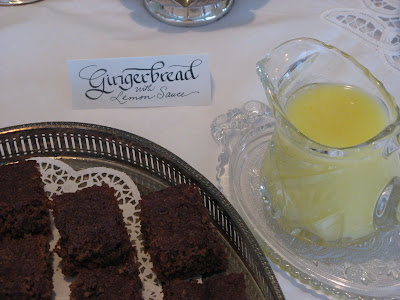 Rustic Apple Tart (what a lovely smell to have at this time of year -- the first apples melting into the crust with plenty of brown sugar, lemon juice and butter): 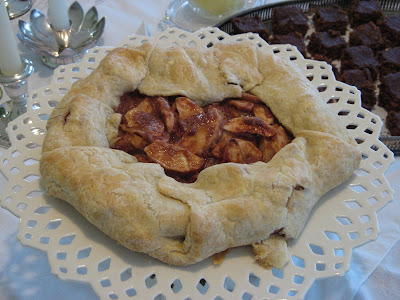 Another friend brought the fruit bowl and it was arranged just how I imagined something in the Austen time period to be! And, just the fruits they ate back then too! 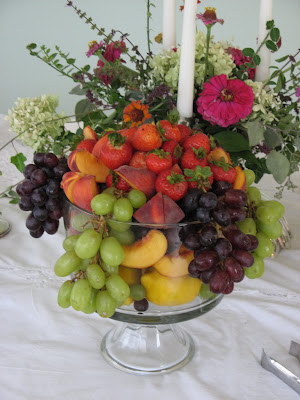 Sticky Toffee Pudding was a new discovery for many: 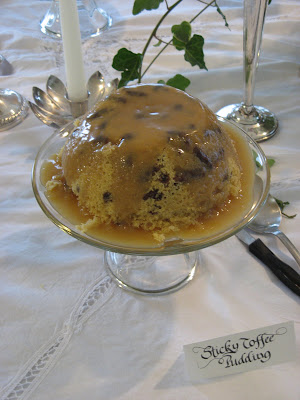 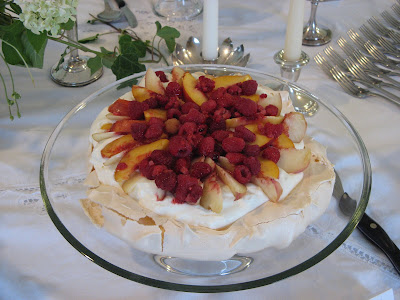 Another jelly -- this time in the form of Coffee Cream. It was very, very good! We also had a cheese tray and some chocolate-covered cranberries. 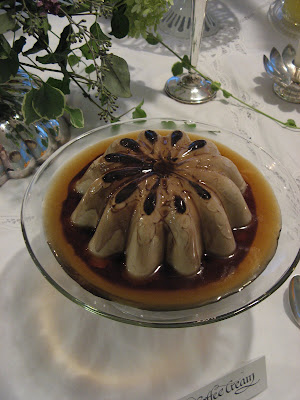 The table, with its many candles and flowers, looked lovely in the evening hours: 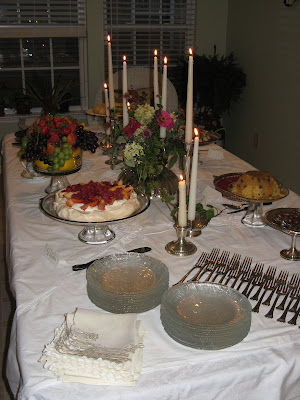 And of course we had tea! Jane Austen wouldn't really have had afternoon tea -- she would have drunk hers in the evening, so we were very accurate on this bit! 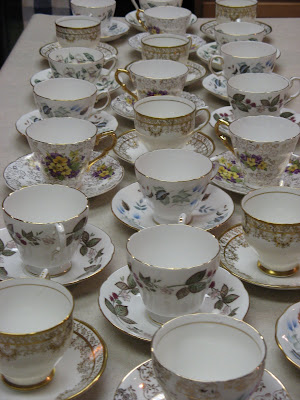 The evening ended with lots of presents for the Bride-to-Be: 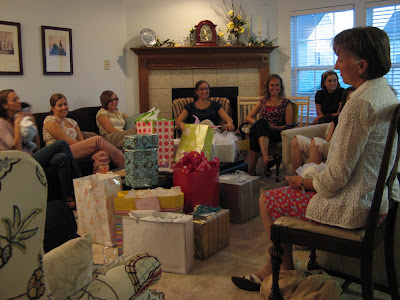 It was such a fun time, and we are all so happy for Stephanie and excited to attend her wedding next weekend!

In case you are interested, I do plan to post recipes on the recipe blog sometime soon. And, I thought perhaps a few of you might be interested in some of the books I used to get ideas for the shower:

So You Think You Know Jane Austen? by Sutherland & Le Faye

Heather you never cease to amaze me! It looks beautiful!

Wow Heather! What an absolutely great idea - and what a fantastic time it looks like you all had. Gosh! I wish you lived closer to me - it would be such fun - you're so creative! The food looks scrumptious, and the flowers and candles are so pretty.
Rachel L

It was so fun! The food was delicious and the theme was creative! Thanks for hosting it!

It was truly a lovely shower! One of the best I've been to, if not the best. It was such a thoughtful, elegant and fun evening. Definitely one we'll always remember. Thanks for all your work in putting it together. :)

And thanks for the book list--I'll have to get some of those!

i think im going to get married again so you can throw me my shower ;)

What a BEAUTIFUL shower! I wish I could've been there to really enjoy it. It seemed like it was a smashing success.

Heather - what a beautiful gift of hospitality you share with others - and the food! Oh my! I must sneak over for your next do and take some pointers from you! Sticky toffee pudding is wonderful - are you planning to share the recipe? I hope so!!

That looks wonderful, you are so good at organising things like this. I loved all the details, right down to the beautifully written cards with the names of the puddings!
I will be popping over to your recipe blog.

Heather, the shower was wonderful! I thoroughly enjoyed myself and so appreciate the care and thoughtfulness you put into the evening. It was perfect! Thanks so much! I definitely felt celebrated.

Wow... it all looked so good!!!! great job H... wish I was there, but glad you took Photos!!! sounded all so fun and beautiful!!! gotta have that coffee jello at Thanksgiving!!!!
congrats to stephanie... and bravo on the shower H!!!!!
love Mom

Wow, just looking at those pictures made my mouth start to water! What a neat theme idea too.

Hi there,
sounds like you have really put your gifts to good use and build up the saints!

I have 3 weddings this month. Over here in Ireland it is popular to go out on a 'Hen Night'. You dress up skimpy, wear bunny ears, get drunk and dance on tables... Far from a T party. Another popular thing to do is to fly to one of the hot spots in England and get so drunk you can't remember the good time you had:(

My neighbour, who is getting married in 2 weeks hit the town on Saturday night. However, I didn't go and instead have planned for her, another neighbour and two women from the church to go to my friends Hair Salon this Tuesday, have a wash and blow dry, go to a local Italian Restaurant, back home,get into comfy pj's, have fresh fruit and ice cream, chat and maybe watch a movie...

With all this going on, I hope that my two sisters in the Lord may get to witness to my two neighbours.

Like I said, the norm around here is no Tea party but I hope that this little outing will show her that there is another side to life!Would love to do something along the lines of what you did but it just wouldn't go down...

By the way, I just love the photos and scripture on your last post.