Yesterday I was thinking back seven years to our landing in Scotland (Sept. 17, 2001). Thinking also about what I could write for my 200th post, I decided a Scottish Memory just might work. Here is an excerpt from that time seven years ago: 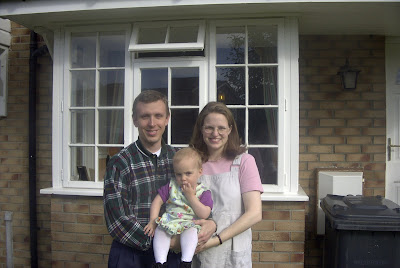 "Alone, and in a new house, not to mention a new country, I knew the very first thing to do was to make a cup of tea. With my fingers wrapped around the hot mug, I took a seat in the front room and began to take in my surroundings.

I had already noticed the coolness of the room. It was only the middle of September, but already the air bore a chill in it. The front room, where I sat, had been painted a pleasing magnolia, with a bright terra cotta hue below the chair rail. Tiny orange flowers twinkled at me from their place in front of the gas fireplace. A large sofa sat opposite two matching stuffed chairs, with a small bit of wood floor stretched between them. The room had been tastefully decorated and I loved it.

I took another sip of my tea and gazed out the bay window, drinking in the view. Little brick houses, semi-detached, ran the length of the street; the only distinguishable differences lay in the brown or white paint of the window and door trim. Tiny patches of grass grew in front of each door. If one was lucky, a small tree grew as well. The street seemed deserted, but I supposed it was during school hours and any children would be up the street at school.

I had four years ahead of me. I couldn’t wait for the chance to explore our town and then beyond to as many places as possible. 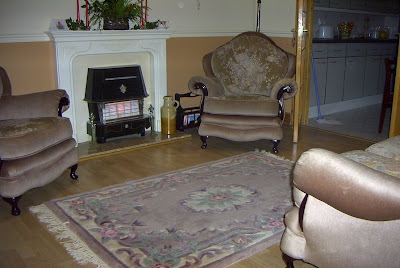 My first task was to get our little house set up and our things unpacked. We’d come over with five pieces of luggage and ten boxes of books. The rest of the furnishings had been kindly provided by people we had yet to meet.

Behind the front room was the kitchen. Holding my mug of tea, I walked around inspecting each feature of the room where I knew I would spend so much of my time. There were plenty of cupboards, for which I was very thankful, and lots of counter space. I opened a cupboard and was pleasantly surprised to find it had been amply stocked in preparation for our arrival. I glimpsed marmalade and packets of flour and sugar. There were tins of tomato soup and baked beans, and a very tempting pile of biscuits and tea cakes.

Under the kitchen window was a sink and below the sink to the left were situated the front-loading washer and the dryer. Another wall housed the four-burner hob and below it the convection oven. Nearby stood the European-sized fridge. Almost as tall as the countertop, it could easily have been mistaken for just another cupboard. I leaned against the counter and let my mind wander, trying to imagine what our life would be like in Scotland over the next four years. Would we settle into life in a small town, meet friends and begin to feel at home? Only time would tell."
Posted by Heather L. at 8:24 AM

Once again I'm a bit behind with my blog reading and have just read several posts of yours at once. Its harder for me to get to the computer during our television free month as the rest of the family are spending more time using it!
I liked this post. I hadn't realised that you had spent so long over in Scotland. You sounded very positive since you were so far from home with a young baby.

Hope the crab apple jelly went well. My boys loved it when they were small.
Also glad to here the sock knitting is coming along well - please post a photo when they are done.

Heather.. I remembered also the day you left for Scotland, the airport was deserted... It was one of those "Lean heavily on God" days.... It was hard to see you go. but wow... what a wonderful adventure it was!!! and we will all never forget it!!! God is good and He has a purpose in all he leads us thru....:) love you
mom

Nice photos of apple picking! Tell me, why were you in Scotland?
Ruth