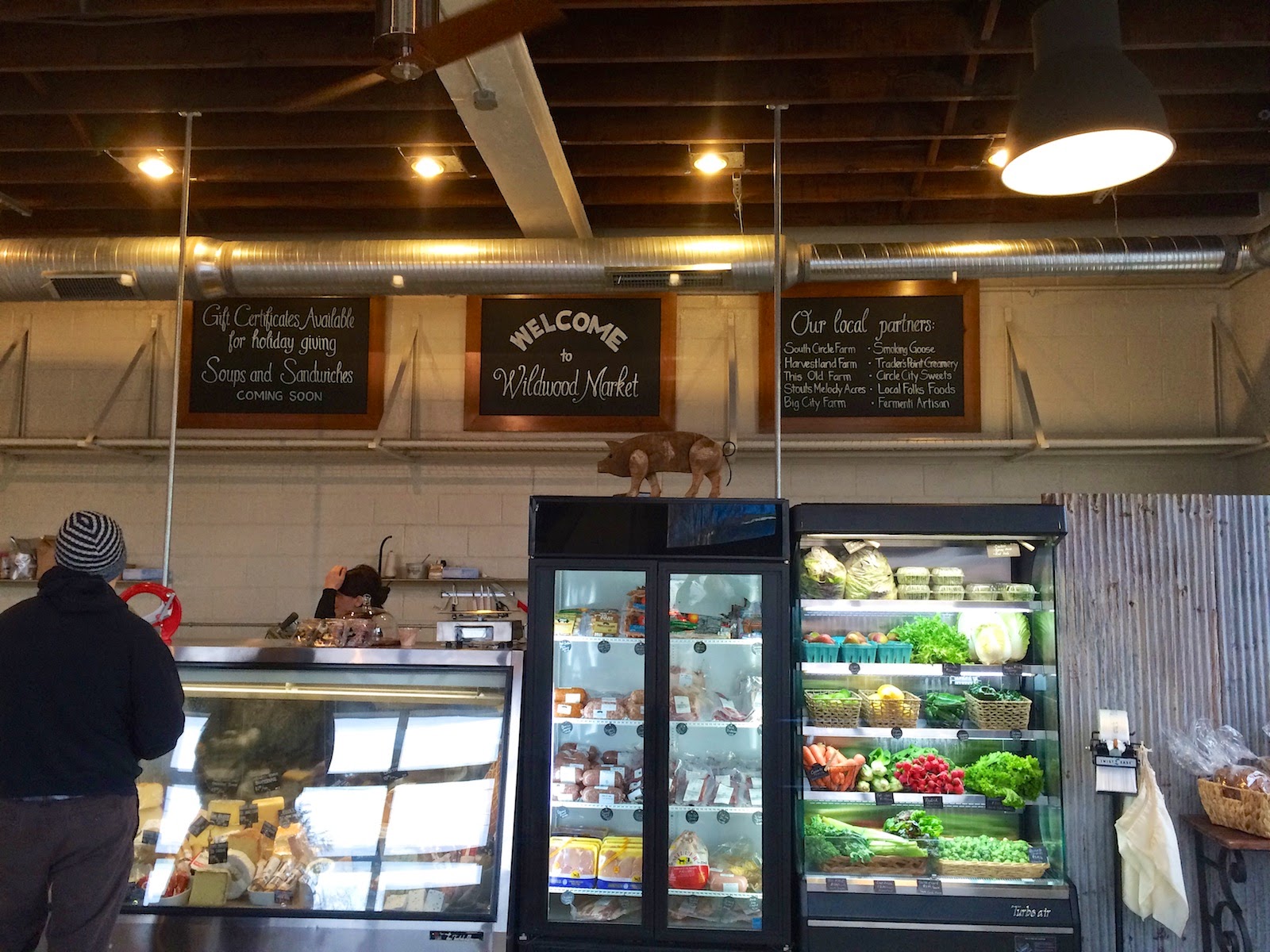 Today was my first visit to the now open Wildwood Market!!!!! My brother-in-law, Craig, has dreamed for a long time of owning his own neighborhood market, selling seasonal produce from local farms and producers, quality meats, and lots of cheeses! Well, together, he and Emily have made it happen! I'll do a separate post with pictures of the whole shop but here's one photo to show you the back wall of the store (and my signs :). I picked out some roots vegetables to roast, some specialty sausage for Christmas day and couldn't resist some Vitamin C lollipops for the kids.

Eventually I had to leave the store. I think most of my family wishes we could just hang out at the store all the time. But, I had to drop Andrew back home and we had to make a family visit to the vacuum store. Our vacuum died last weekend and you can only go so long in our family without a vacuum. I think a new one will be making its appearance on Friday. After that it was my one chance to SHOP for Christmas. Yes, it turned out to be 12 hours from my first outing in the morning until I got home with everything in the evening. But I think all but the rest of the food is purchased!

I spent considerable time at Goodwill, especially since instead of charging me for my purchase they actually put money back onto my gift card. Sigh. Checking my texts with my mom, it appears that it took nearly an hour for them to work out what to do. They had never seen anything like that happen before. I considered just leaving several times but the problem was I could leave all the merchandise but they wanted that $14 back in their register and not on my card. Hmmmm...... And they didn't seem to realize I might have a life too. But, I was very thankful that I was under no pressure to be home by a certain time and wasn't late for anything -- rare occurrence. In the end, I finally told the assistant manager how to solve the problem (he was fully competent just a little confused) by how and what to ring up. And I made it out of there!

At another store I had hoped to purchase three items but none of them were on sale and I only had one coupon. So I picked up one item and got in line. Wouldn't you know, a lady turns around and asks me if I want another coupon! That was a blessing because it saved me at least an hour or more of running out another day to get that second item. I hope I expressed my gratefulness enough to her! I think I was so excited I might have run away a bit too fast!

It's nice to have that done....tomorrow will be the baking.
Posted by Heather LeFebvre at 11:00 PM

I spent the morning yesterday running necessary errands and was so exhausted by the time I arrived home, no Christmas preps were accomplished.

Tomorrow is my daughter-in-law's birthday so I just may have to make a batch of her favorite cream scones and take them over to their house when she comes home from teaching.