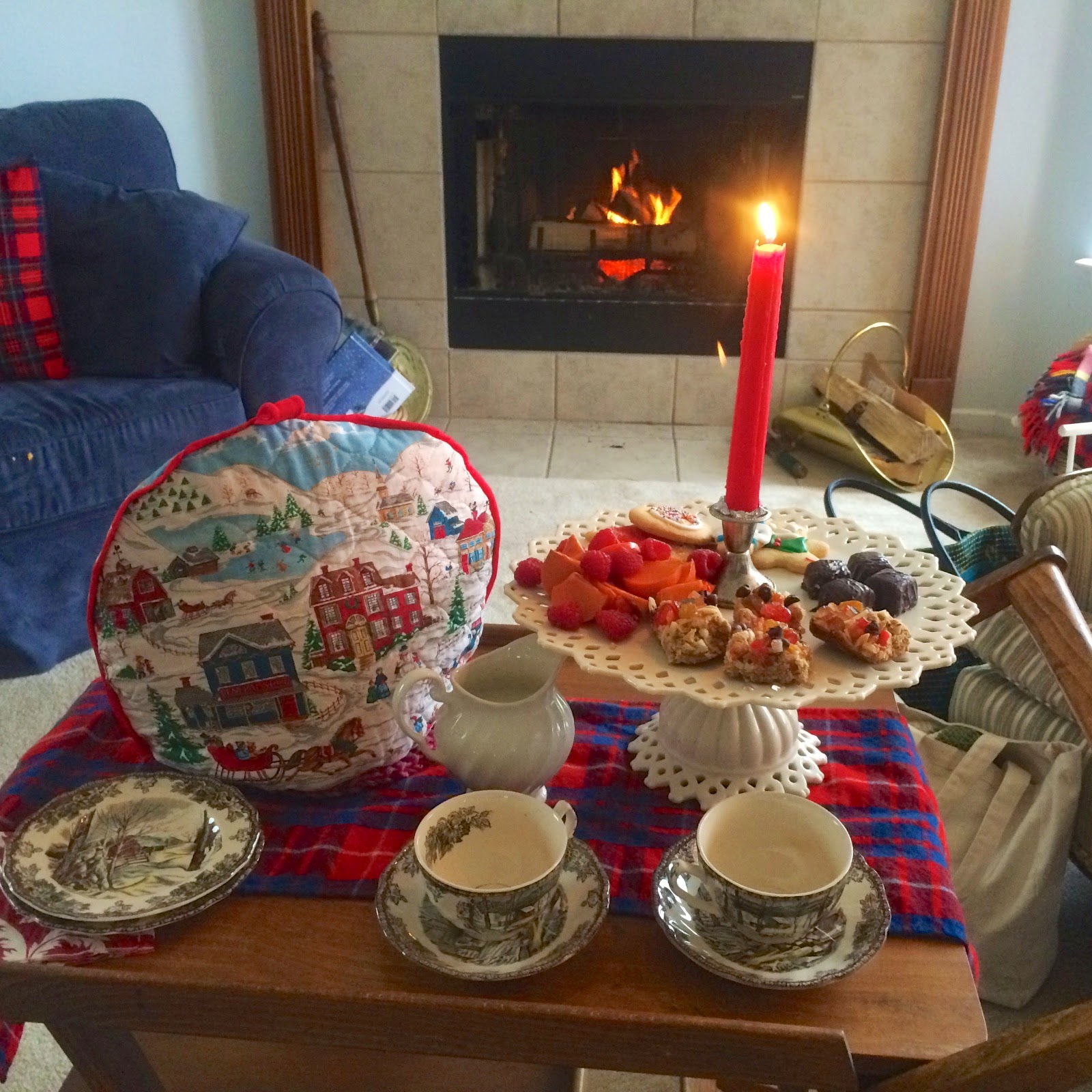 Friday. Such a nice day. We finished our Gershwin movie in school, finished our chapter on primates, and watched A Child's Christmas in Wales on Youtube.

A friend joined me in front of the fire for the afternoon -- needed down time for both of us. Life never slows and unless I force myself to stop, I don't. We talked knitting, crocheting, books, and life in general. And we enjoyed Mighty Leaf decaf Earl Grey (two pots) and several gluten free treats as well as sliced persimmons (one of my favorite seasonal treats that also makes an awesome addition to a salad).

After tea I raced down to pick up Rachel from school, get her home and dressed up for her Winter Social at school -- which of course meant racing her back to school by 7 p.m. While that was happening I did manage to feed the family a new food -- black bean noodles from Costco in a vegetable stir fry. They were SO good!!! And, they have 25g of protein per serving which means you aren't missing the meat! I think I'll make this a regular staple.

I dropped Rachel at school and headed to Craig and Emily's new shop via every scary and deserted street Google maps could think of! My job was to letter several large signs that will hang at the back of the shop. Three hours later they were done and I was on the road again (via my own directions) to get Rachel picked up and head home to bed!
Posted by Heather LeFebvre at 9:07 PM

Heather, I love that you make time for peaceful rituals like tea. I was thinking about this the other day, when it seemed like from 5:30am to 10:30pm I did not have a single second to just breathe--I think that was the day you posted about having the hour in the morning to drink tea and have time to yourself. If you ever do a post on how you carve out time and still get school and cooking and crafting and everything done, I would love to learn!

I need tea and knitting too... I love those dishes; my Mother has them, from my Grant-grandmother....

Since we had Thanksgiving elsewhere this year, the Friendly Village will be used at our Christmas Eve celebration and perhaps with our Christmas meal of yummy leftovers!

Victoria is pleased at your appreciation of Maine Coon kitties. They are the most affectionate of cats (almost dog like in that) although very full of themselves as are felines in general, hehehe.

It's so neat that you do this stuff, Heather. You have the gift of hospitality. That is one thing about living FAR in the country with a HUGE, icy driveway. I need a helicopter for people to come over here. ;) This encourages me, though, in the warmer seasons to have people over more.

Catching up here - such a pleasure. First of all, a belated Happy Birthday to you! Your Christmas preparations are so beautiful and fun. And I'm glad you are making time for yourself. That is a good example to set for your children, especially your daughters I would say.