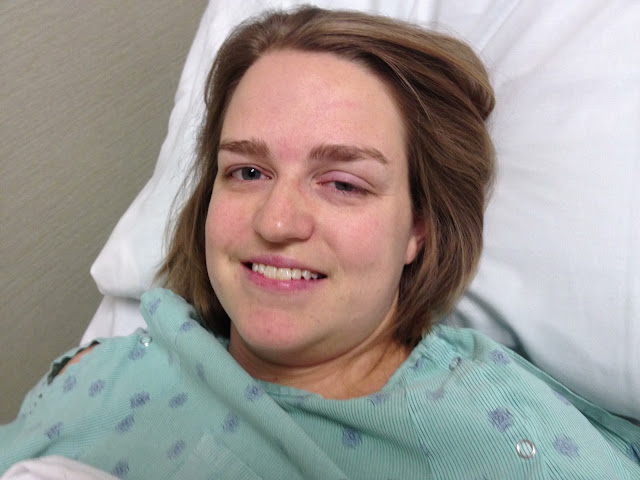 My youngest sister's 26th birthday. Eye Surgery day. I once promised to tell about my eye situation and never did. After Laura's birth I was diagnosed with Grave's disease (an autoimmune disorder affecting the thyroid). A year later, against many odds, I was diagnosed with Grave's Eye Disease (an autoimmune disorder in which the body attacks the cells in the tissue surrounding the eyes). The effect of this disease was a bulging of the eyes, most noticeably on my left side. To prevent further damage, I had the eyelid lowered last December. However, against many more odds, I fell into the 2-5% that does not turn out perfectly the first time. So, we waited until our deductible was met this year and went back this morning to have the eyelid raised slightly. The above picture is somewhat exaggerated since I also just happened to develop a sinus infection the night before surgery. We are all hoping that after the 3 months or so of recovery my eyelid will more closely match the right side! And hopefully I will remain in the large percentage of people who have no further trouble from Grave's Eye Disease.

After being starved all day it was a treat to return home to food, lots of tea, and sitting around recovering. Christina brought a delicious meal, and I now have an excuse to go to bed early and read or knit or watch something -- if I can keep my eyes open. :)
Posted by Heather L. at 7:17 PM

Oh, dear! I pray you recover quickly. If I were closer, I'd bring you soup and homemade bread!

I had my post-op eye exam today, it takes over two hours to get the drops and the pictures of the retina taken and usually just five minutes with the doctor.

Today he sat and talked for awhile as he is going through some serious medical problems, too.

We chatted awhile about living with chronic illness and as I left, I told him I'd keep him in my prayers.

Hope it heals quickly!! I've enjoyed your daily posts this month. It's nice getting to "know" you more.

Sending you best wishes for a speedy recovery from the surgery and hope that all goes well this time.
I am sure your family are spoiling you so you'll get time to rest, read and knit - activities very necessary for recovery I think!

Oh dear Heather, I do hope you are being cosseted at the moment and for some time to come. My husband had an eye injury when he was eight and had many surgeries in his growing-up years; he had another a few years after we were married. I hope you heal quickly and that it has the desired effect this time.

I've really enjoyed catching up on your December posts! You have such a zest for life. I was intrigued by the Goodwill photos - nothing nearly so enormous as that here in Scotland. It sounds like great fun and worth saving up for. Like the January sales used to be here in the UK.

I also liked two mentions of boys knitting (not the same boy?), learning about your reading, seeing those wonderfully creative girls do something so worthwhile, seeing your beautiful Christmas crafts and also that amazing quilt top. My husband Michael is like yours: he never, ever complains about all the ambitious knitting supplies, books and whatever else I pack to take on holiday. Even when he ends up having to have things crowded down by his feet when he's in the front passenger seat! Lucky us.

Blessings to you and your family.

Heather I'm sorry to hear of your eye troubles. I sincerely hope you are sorted now and can put it all behind you. Take advantage of those knitting days and rest whenever you can and your recovery will be all the speedier.
Kate x

I do hope and pray that you are one of those that fully recover with no more need to worry about eyelids and bulging eyes.