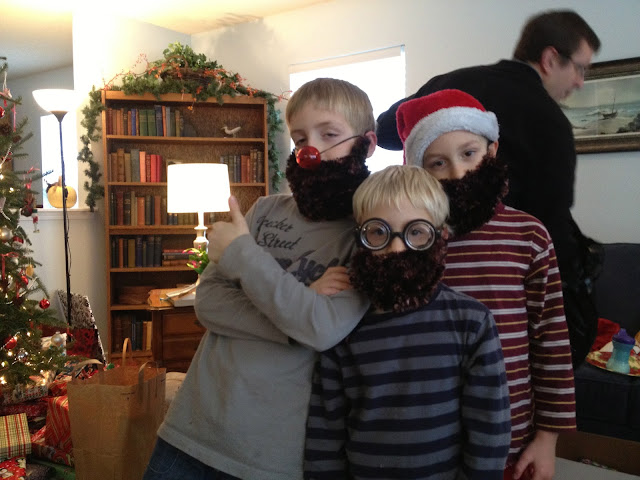 Heard children running down the stairs at 7:15 so Michael had to go shoo them off to a far corner of the house until we were ready to get up around 8:15 at which point we watched the kids open their stockings. Breakfast prep was started and when I came down from getting dressed I was completely surprised to find Michael had made a fire in our fireplace (the first time ever!!!). After reading from Luke 2 we grabbed our breakfast foods and Michael started handing out presents. Grandma arrived just in time to participate. By 10:30 the children were hard at work in the front room on their new Lego sets and the adults were enjoying pots of tea, easy chairs, coziness, and peace. Thus the better part of the day passed along with texting now and then to wish friends and family a Merry Christmas. As the day wore on it became more and more obvious that our heat was no longer working. Craig and Emily arrived later afternoon to enjoy the festivities for a few hours and the fun finger food was pulled out for dinner. An early movie (Hugo) was enjoyed by all and then all the wool blankets and the one space heater were collected to keep children and adults warm through the night. The high winds began almost at once and by the time we had awoken in the morning the blizzard was in full swing with several inches of snow already on the ground and the house was holding steady at 56 degrees F.
Posted by Heather L. at 10:06 AM

I've been seeing pics from Indy today, it looks terrible!

Not that it is much better here. Definitely staying inside. Pray for Christopher and M. as they are suppose to leave for New England tomorrow (Thursday).

This will be the only time for about a year they could make the trip.